Every workplace has a unique language. Ours is mostly reacji.

Zapier has been a remote-only company since the beginning, and clear communication is the only way to make that work. How we use emoji is a big part of that—reacji in particular.

Emoji reactions are quick, allow multiple people to quickly say the same thing, and let your team add input to older messages without cluttering up the conversation. It's no exaggeration to say our 400-person team couldn't operate without them.

All of the best team chat apps allow for emoji reactions and also allow for custom emoji. At Zapier, we've created thousands of custom emoji that speed up communication. We use them so often, in fact, that it blows my mind that none of the major chat apps come with them by default. Here are some emoji every team should add—download them all here.

Sometimes you ask a quick yes or no question. At Zapier, we have Y and N emoji that we use for this.

Sometimes people will answer with more context in a thread, but sometimes responding with the reacji is enough. It's fast, and we use it all the time.

Thank you and you're welcome

There's no standard emoji for saying thank you. Some people use 🙏 for this, but that's ambiguous at best and might even make some people feel uncomfortable. Which is why we have a thank-you emoji. 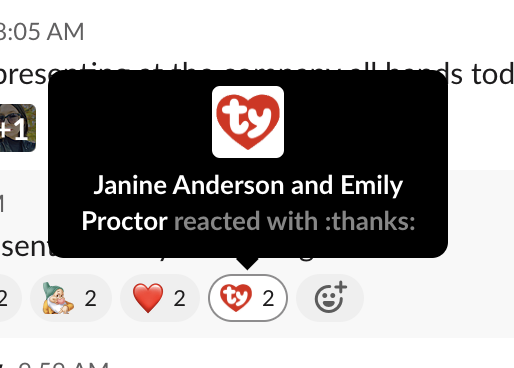 Yeah, it's technically the logo of a company famous for creating an unstable economic bubble in the '90s, but we mostly use it because the letters T and Y are in there. It was weird to me at first, but then I got used to it—everyone does. And we also have a non-heart version that isn't related to Beanie Babies at all. Just in case. 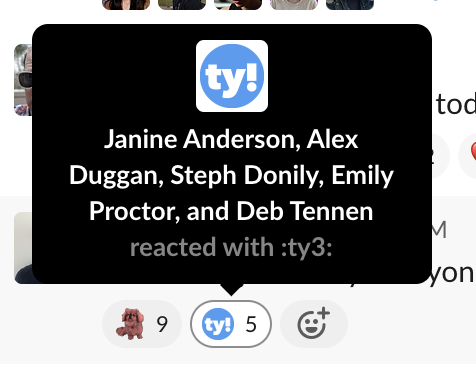 At some point, someone added a you're welcome.

Sometimes you just want to express that you agree with something. A whole thread of people saying "I agree!" feels unnecessary, and no one can see you nodding on Slack. So we have a bunch of custom emoji for this purpose.

One, called "this," is an animated arrow pointing up at the statement.

Of course, there's a built-in emoji that roughly works for this: the ➕ (heavy plus sign). For us, this didn't represent enough shades of agreement, so we added a thicker plus sign. 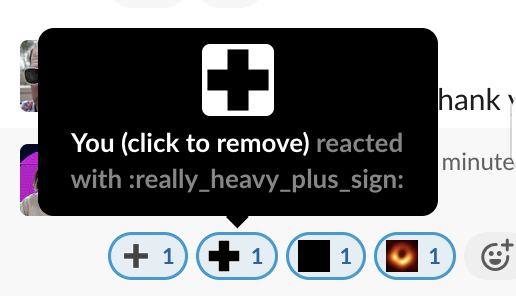 People used this to express even stronger agreement. But again, it eventually wasn't enough. So we added a plus sign that got so big it became a square. 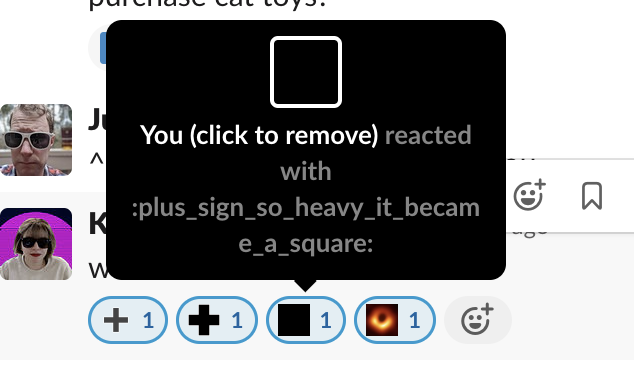 Agreement beyond that point is a plus sign so heavy it became a black hole. 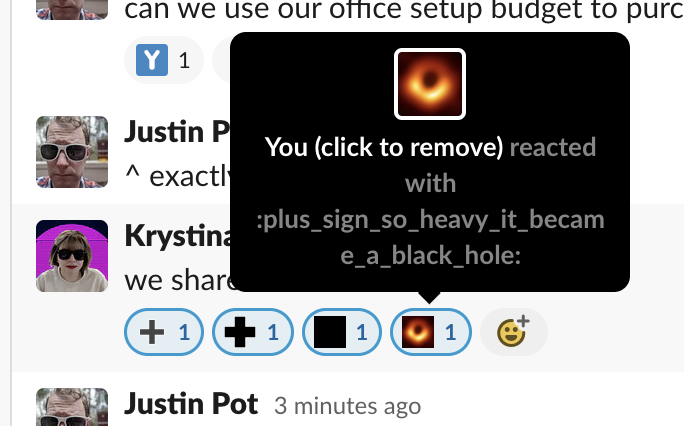 These started as jokes, obviously, but over time, they became symbols that everyone at the company understands and uses to express varying levels of agreement. I recommend adding something similar, so you're not stuck with just plain agreement.

Sometimes a coworker says they have a migraine and need to get offline for a few hours, or that they need to take their dog to the vet. It's nice to have a quick way to express sympathy in these moments, and at Zapier, we use a bear hug emoji. 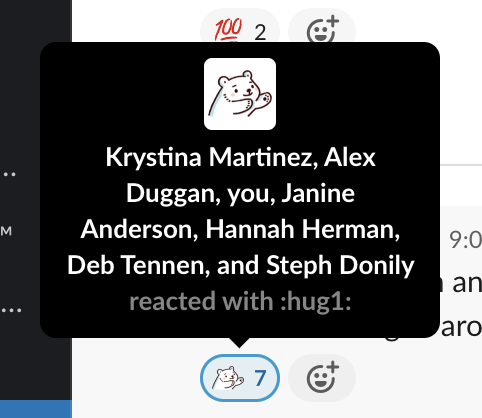 It's cute, it's harmless, and it gets at a nuanced idea—I understand what you're going through, and I hope you feel better—in a single click. It is one of the strangest emoji you'll come across after starting at Zapier, but most people start using it once the meaning clicks.

Sometimes an idea is bad. We shut those down using a red X emoji.

We also use this to indicate when something ended up in a channel accidentally or otherwise doesn't require a response.

We don't use this to mean anything specific. I just think it's the perfect emoji and wanted to include it here. 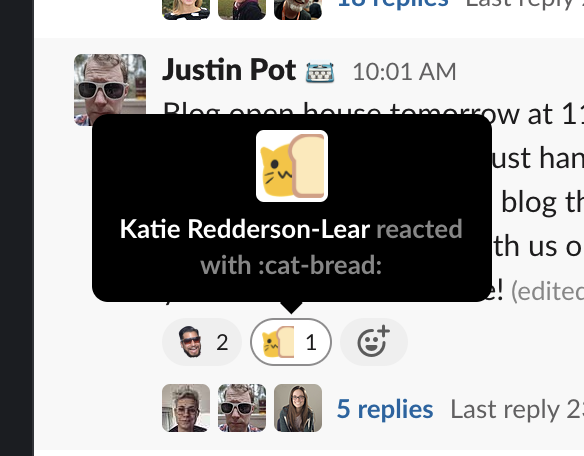 This is only the beginning of what reacji can do. You can also use them to create a quick poll on Slack or to cut down on the noise at work. I'm not saying they're the single greatest invention of the 21st century, but I'm also not saying they're not.