Team chat apps aren't just tools—they're the modern office. That's obviously true for remote teams, but the appeal goes well beyond that. Companies that have a shared physical workspace increasingly depend on workplace chat to get things done.

Part of this is about efficiency: information workers are sitting at their computers all day, and it just makes sense for conversations to happen there. Type a quick message, get an equally short reply, then get on with your work. Business messaging apps also mean that everyone can decide to participate in, or at least see, relevant conversations, while crucially also allowing people to ignore messages that aren't relevant to them.

This article shows our picks for the best team chat apps currently on the market. We reviewed and tested 25 apps, and these five are the ones we'd recommend.

This piece also includes some ways that you can use Zapier to do more with your chat app, like get reports of key info delivered to a specific channel or receive notifications before events like meetings. Zapier's automations are called Zaps, and you'll see several Zap templates—our pre-made Zap workflows—throughout this piece. To get started with a Zap template, just click on it, and we'll guide you through setting it up. You can read more about setting up Zaps here.

Communication is tied to culture, and every company is different—this is why there are so many work chat apps on the market. We think a few features are universally necessary, however, and kept them in mind while we were reviewing apps. The best team chat apps:

The apps below are, in our opinion, the ones that offer the best balance of these five things. Note that we focused exclusively on apps built for real-time communication, and deemphasized tools that focus mostly on project management. 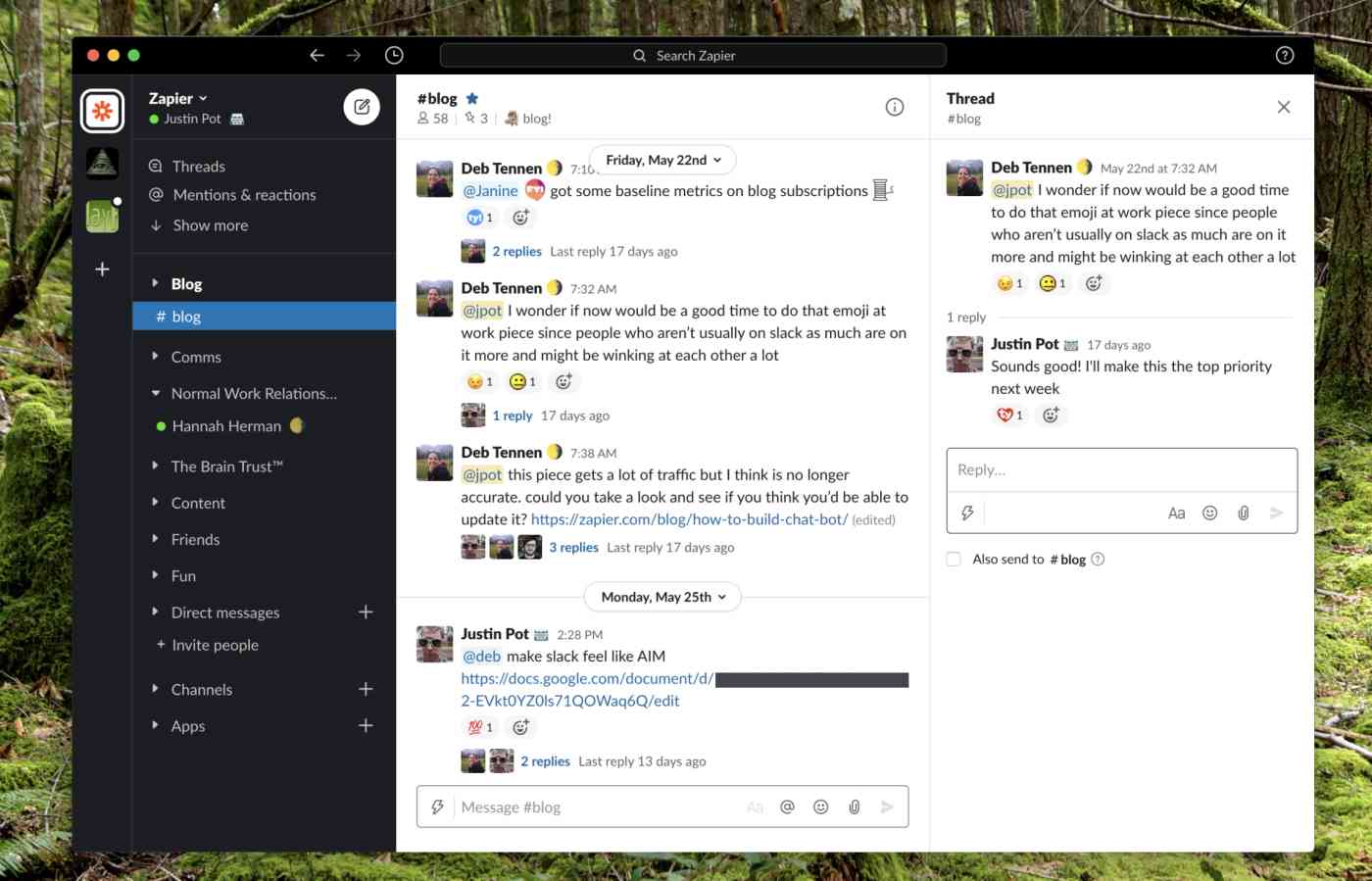 Slack launched in 2013 and quickly came to define the team chat space, in no small part because people loved using it. It's not hard to understand why—this is an application designed with the user in mind.

Every Slack team has a General channel intended for the entire company, but the bulk of day-to-day chatter happens in channels related to a specific team or project. Users decide which of these channels they want to be in, which means they can avoid being flooded by messages about projects unrelated to them. This sorting goes further: conversations in these channels can be broken down into threads, and users will only be notified of conversations in threads if they participate in the conversation or actively decide to subscribe to them. Team members can tag other users to pull them into channels or threads, which helps balance the need to reduce noise with the need to ensure important conversations are being seen.

Slack also makes it easy for users to find answers using search. You can easily filter by channel, user, date, and more. Collaboration is another key emphasis. Quickly share files by clicking-and-dragging them onto the app, or by linking to them. Most links will unfurl, meaning things like images and videos can be reviewed without leaving the app. Small features, like emoji reactions, make it easy to meaningfully respond to messages in just a couple clicks. Video and audio calls can be started with a single click. And there are thousands of integrations with other applications. All of these small touches might sound overwhelming, but a clever design (alongside friendly UX copy) means that Slack rarely feels confusing or overwhelming.

Slack's biggest downside might be its price—particularly given that it doesn't come as part of a broader software bundle. For teams that are serious about workplace chat, however, Slack offers more than enough value to be worthwhile.

You can do more with Slack when you connect it to your favorite apps through Zapier. You can create automated workflows that let you know when a calendar event is about to start, add saved Slack messages to your to-do list automatically, and more. 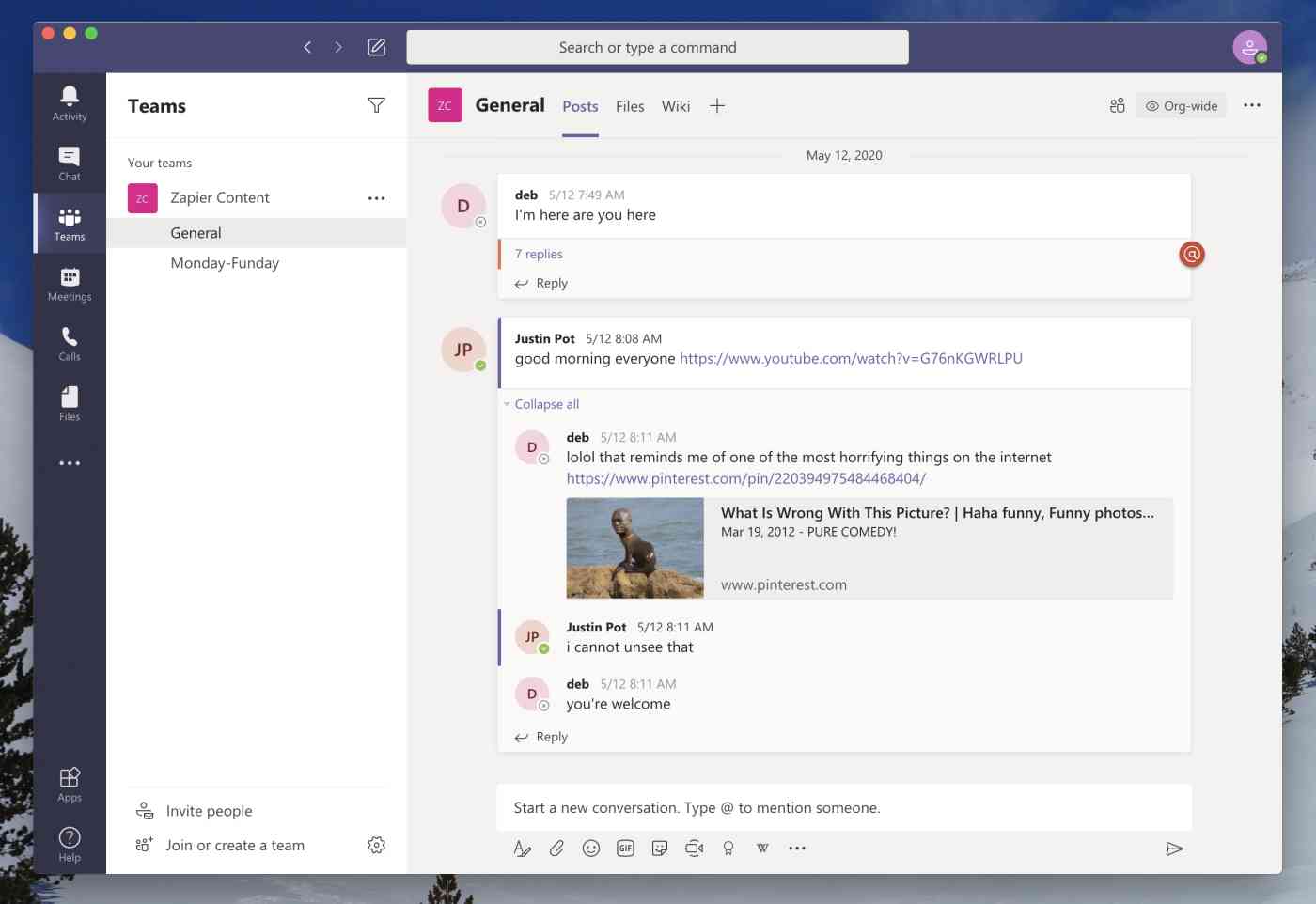 Microsoft Teams is what happens when an org chart becomes a team chat app. How much you'll like it is directly related to how appealing the previous sentence was to you.

Every Microsoft Teams account is tied to a single organization, sometimes called an org, which represents your entire company. Users are invited into one or more teams inside a company, and every team is broken down into channels. Conversations in these channels are forced into threads, breaking conversations down yet another level. It's the most layers of organization in any team chat app we tested, and while it might sound a little confusing, the result is ultimately tidy.

Video and audio calls are a big emphasis. Users can schedule meetings, complete with an agenda, or hop onto spontaneous calls. There are also extensive collaboration features, including tight integration with the Microsoft Office suite for collaborating on documents, calendar appointments, and notes.

The main downside to Teams is how much work it is to roll out. If you don't have a dedicated IT staff, it's going to be tricky to set up, particularly if you're attempting to set up the free version. Considering the size of organizations Teams seems to be built for, however, that's probably not much of a barrier—especially if your team is already using the Microsoft Office suite of apps.

When you connect Teams to your other apps using Zapier, you can track invoices in Teams as they're paid, get instant visibility into new leads by posting them to a channel automatically as they come in, and more.

Microsoft Teams Pricing: Included with Office 365 Business Essentials and higher from $5/month per user (when paid annually) for Sharepoint, OneDrive, cloud versions of all Office apps, and Microsoft Teams chat. 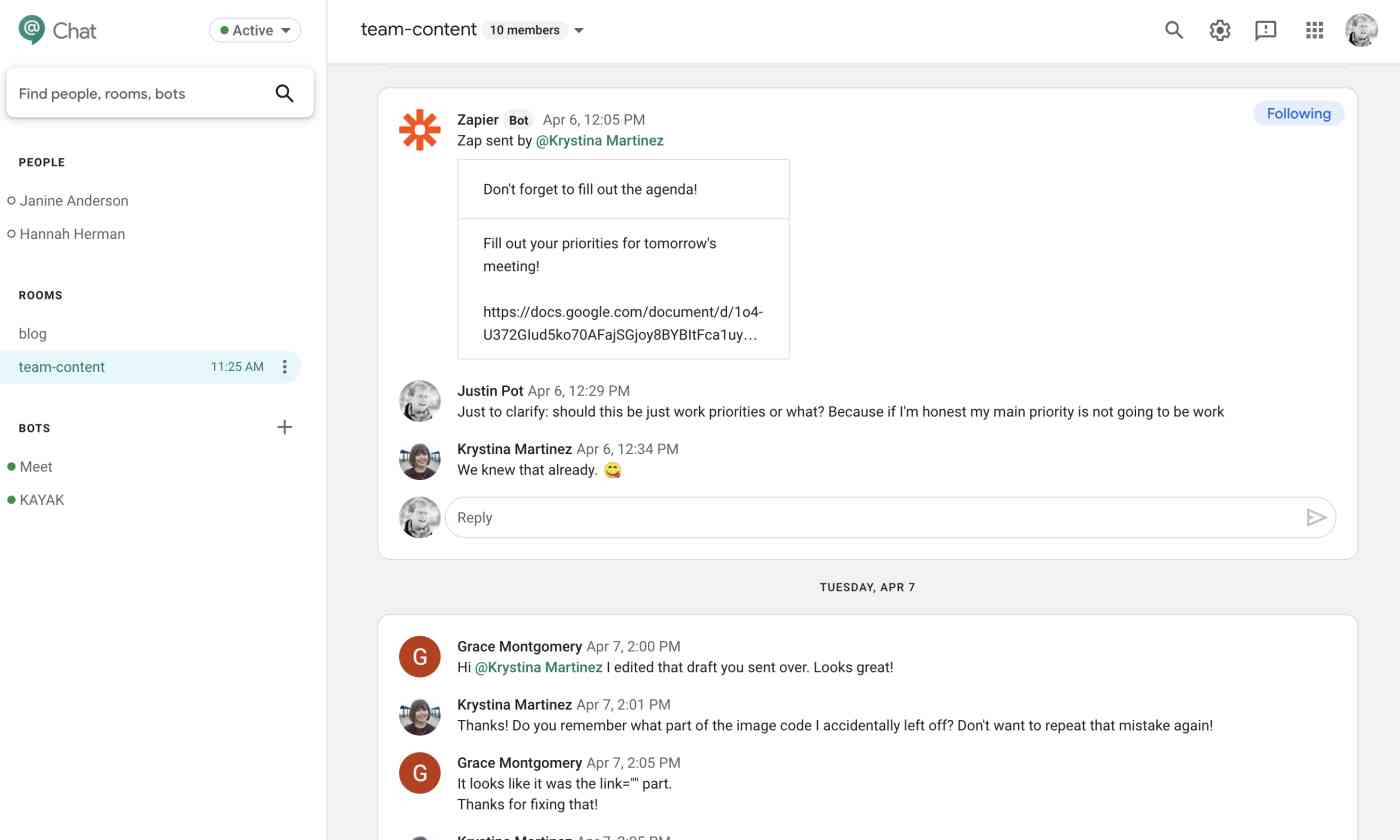 You're forgiven if you didn't know Google offered a team chat app—it's not exactly common knowledge. Even so, Google Chat is worth looking into.

Google Chat, formerly known as Google Hangouts Chat, breaks conversations down into rooms, similar to channels in Slack. Conversations are forced into threads, which helps keep things organized. Your company can add as many rooms as they want, and users can easily join and leave rooms.

Where Chat really shines, however, is with integrations with Google's ecosystem of apps. Pasting a Google Doc link automatically changes permissions, so everyone in the room can open it. You can quickly organize a meeting with any coworker by tagging Google Meet, your coworker, and saying when the meeting should happen—this creates a calendar appointment complete with a Google Meet link for video conferencing. Search is also a strong point, which, considering this is a Google product, probably shouldn't be a surprise. Results show up in real-time as you type, and there's a wide range of filtering options.

Google Chat's weakness is probably polish. Some seemingly simple tasks, like browsing a list of public rooms to join, are buried behind multiple clicks for reasons that are unclear to me. Using Chat will take some getting used to. But it's a solid choice, and if your company is already paying for G Suite, it's essentially free.

By using Zapier to connect Google Chat with the other apps you use most, you can turn your chat app into a work hub. Get notifications in the right channel before important events, for new form responses, or when new tickets come in from your ticketing app. 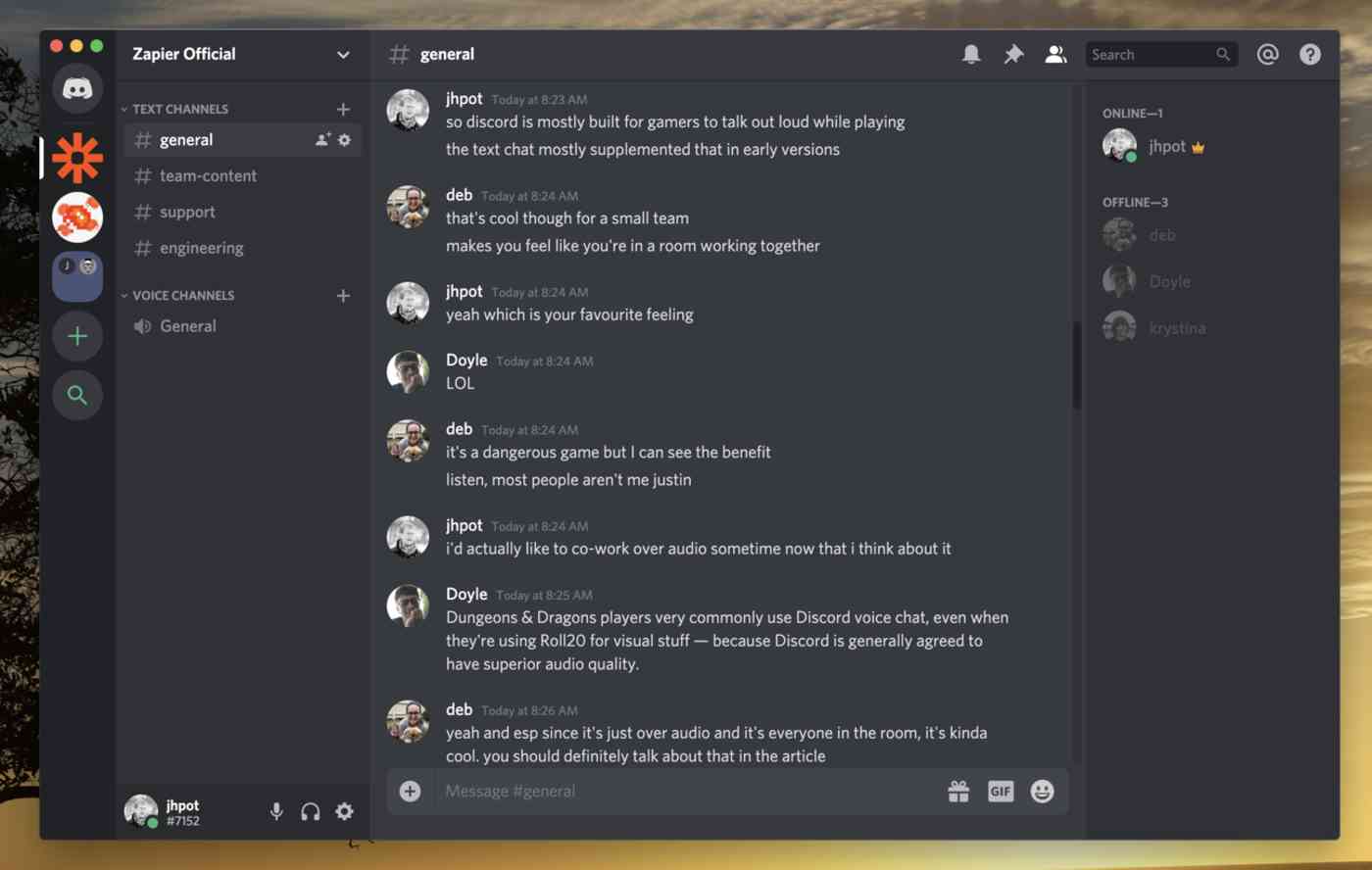 Discord is a real outlier. It was originally built with gamers in mind, and is still branded as such. There aren't a lot of business-specific features, and integrations are largely bots built by third parties. But Discord can work for business chat for one key reason: excellent always-on audio.

Discord offers text channels, similar to those seen in other team chat apps. You can add as many as you want, although there are no threads to break down conversations further. The highlight here is the voice channels, which are always-on phone calls where you can talk to anyone on your team. You can keep your mic off, then push a key to start talking whenever you want to jump in. It's designed for gaming, with an overlay view that shows voice channels on the side of your games. But it's just as handy to talk to colleagues while working remotely in a shared Google Doc. There's also the option of video chats, if you want to see your teammates face-to-face, but we think the audio chats are the real highlight here.

Again, this app is an outlier in this list, but it's almost entirely free—the features behind the paywall are basically irrelevant to a business use case. Discord also offers some of the best audio quality on the market, and this feature alone makes it worth a look if talking out loud is how you get work done.

Discord becomes even more suited for business when you connect it to your favorite apps through Zapier. Pull Twitter activity into a Discord channel, automatically share new content from your knowledge base app with a channel, and more. 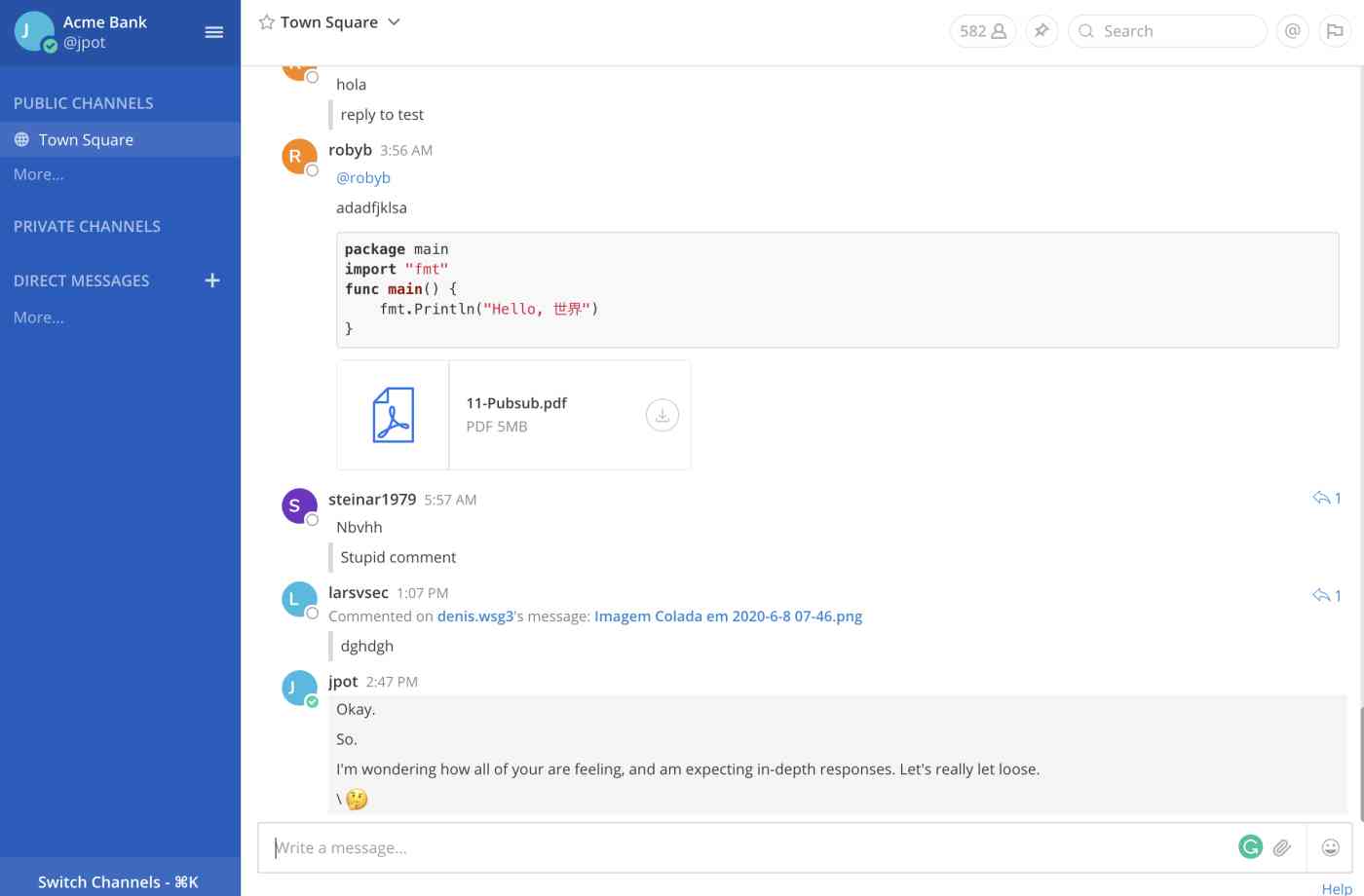 Some conversations are too important to host on a third-party server, which is where Mattermost comes in. This app is open source, meaning you can download and install it on your company's own servers. For some businesses, this is absolutely essential. Mattermost is the most feature-complete self-hosted app we found.

Conversations are divided into channels, similar to other services. Threads are offered, though every post in a thread is also posted to the main channel, which could get a little messy. The search functionality is feature complete, allowing you to filter by user, channel, and date. Video and audio chat are handled by third-party services, some of which you can install on your company's servers and integrate directly in the user interface.

Mattermost is the closest thing you can get to running Slack on your own servers. The interface looks similar, the keyboard shortcuts are basically the same, and there are even emoji reactions. If self-hosting is a must, check out Mattermost first.

You can use Zapier and Mattermost together to get reminders for calendar events, track tickets from your customer support app, or see new messages from your social media profiles, and more—all without leaving Mattermost.

Mattermost Pricing: Free if you download the open-source version and install it on your own server. Paid plans start at $3.25/user/month.

Justin Pot is a staff writer at Zapier based in Hillsboro, Oregon. He loves technology, people, and nature, not necessarily in that order. You can follow Justin: @jhpot. You don't have to. But you can.