How to ruin your brain less while using the internet

The web is literally built to distract you. Here's how to fight back.

I've been on my computer for four hours today, and I'm not sure I've gotten anything done. This is entirely my fault, to be clear—I have deep impulse control problems. At the same time, this is happening by design.

The modern internet is optimized to be as distracting as possible. Social networks and other websites are built by some of the smartest software engineers who have ever lived, and often the objective is to take up as much of your time as possible.

I point this out not to make any kind of moral statement. A business, by definition, has to make money. That very much includes advertising-supported websites and apps that generate more profit the more time you spend scrolling. But it's important to realize this agenda exists—because it might not align with your personal goals.

Maybe you want to be more productive at work. Maybe you want to spend more time being creative or learning new skills. Or maybe you just wish you spent more time communicating with the people you love and less time scrolling through websites that bring you brief moments of joy just frequently enough that you're willing to tolerate the broader feeling of anxiety/jealousy/outrage.

The internet can be an amazing tool for pursuing these goals, but it's not necessarily designed to push you toward it. You've got to work to create the environment for yourself. Here are some ways you can do just that.

Take some control over the algorithms

You probably know that websites are using algorithms to decide what you see. Facebook, for example, keeps track of the people and subjects you tend to like and comment on, then tries to show you similar things. YouTube works the same way: watch certain kinds of videos and you'll end up seeing more about those topics. The idea here is to keep you on the site as long as possible by showing you things you already like.

This makes sense for a website trying to capture your attention as long as possible. It might not make sense for you.

I like Nintendo games. I will admit to occasionally watching videos about The Legend of Zelda: Breath of the Wild, which is possibly my favorite piece of art from the last decade. Watching these videos can, over time, result in an embarrassingly Zelda-centric YouTube home page. This, in turn, leads to me watching more videos about Zelda, which leads to the algorithm delivering more Zelda videos to my YouTube homepage, which...you get the idea.

Cycles like this happen because of the way algorithms work. Your past behavior is used an indicator of what you'd like to watch in the future. The problem: these algorithms cannot see what you hope to do in the future. The result can be to perpetuate habits you might know, deep down, aren't great for your brain.

I, for example, don't want to be someone who watches videos about video games constantly. My interests are more diverse than that. So I fine-tune the algorithm. On YouTube, this means clicking the three dots below a video thumbnail, to the right, then clicking Not interested. 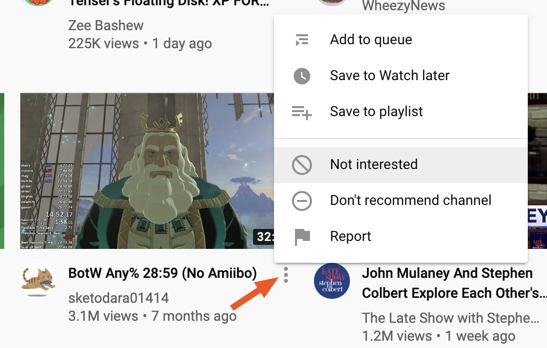 I try to make a habit out of doing this whenever a particular subject is showing up too often. YouTube slowly catches on, showing me videos that reflect more of my interests. I then also make the effort to watch more educational videos—I'm a big fan of Crash Course, for example, but those videos previously didn't know up on my YouTube homepage. Binge-watching a series or two changed that, and now there's more educational content on my homepage.

This isn't limited to YouTube. Facebook also lets you take some control over your timeline, which is useful if you have a particularly annoying friend you'd rather not see posts from. 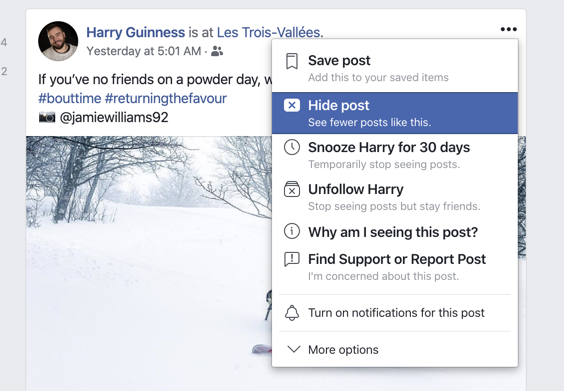 Pay attention on most sites that use an algorithm and you'll find similar functionality somewhere. The results aren't instant, but if you use them enough, you'll see a difference.

These buttons aren't enough, though. After using them, you need to be conscious about interacting with the content. Before you click, comment, or like, think about how that's going to affect the kinds of things algorithms will feed you in the future, and how that relates to your goals for using these platforms.

Look, sometimes you're going to want to watch or read absolute trash without some algorithm using that to judge your future intentions. This is when your browser's privacy features come in handy. Privacy mode opens a new browser window that is signed out of every website, meaning that those websites can't use your account to track your activity and judge you for it. It also means you won't be fed related content in the future, so you can watch some junk on YouTube without worrying about the consequences.

Every major browser offers some version of a privacy mode—on Google Chrome it's called Incognito. You can open an Incognito window by clicking the three dots in the top-right corner of your browser, then clicking New Incognito Window, or by pressing Control+Shift+N (Windows) or Command+Shift+N (macOS) on your keyboard.

Consider this your cheat mode. While you're using privacy mode, algorithms won't track your viewing habits, meaning watching or reading something stupid won't influence what you see later.

Replace algorithmic feeds with human-made ones

We've talked a lot about training algorithms so far, and honestly, it's exhausting. It sometimes feels like, no matter what you do, algorithms are going to continue feeding you stuff that isn't great for your mental headspace. Which is why I propose you try to avoid algorithmic feeds—if not entirely, then for certain parts of your day.

For example: you could use social media to learn about the day's news, but generally only the most emotionally resonant articles tend to go viral. This means you're going to miss stories that, while important, don't inspire likes, shares, and retweets.

Maybe that worries you. If so, a better idea is to find a news source that's controlled by human editors, who are actively trying to balance emotionally resonant stories with less exciting articles that are nevertheless important. This could be the homepage for a publication you trust, or it could be a blog that curates headlines well. You could also learn to use RSS and create your own algorithm-free news feed. The specifics don't matter so much as making the decision to read the kinds of stories that don't spread on social networks, and forcing yourself to read and interact with things that aren't optimized to generate the kind of emotional reactions that trigger social media shares.

This is just one example. The point is to think about online systems that are tending to point you toward a certain kind of interaction, and instead take control. You could shift your online socializing away from news feeds and toward email and messaging apps, where you can have intentional conversations. You could install an ebook reader on your computer and phone, then spend down moments reading that instead of browsing the web.

Doing this is going to take some discipline. Social media sites are popular because they're engineered to give you what you want right now—short-term gratification. Deciding to broaden that focus, and to think about what you need, long term, isn't easy. But it's a crucial part of using the internet without ruining your brain.

You may have noticed that every website and app wants to show you notifications. There's a reason for this: they want you to keep coming back so that you'll see a bunch of ads and make them money.

Again, there's nothing morally wrong about that. These websites have their own interests. But notifications for a particular app may or may not be aligned with your personal interests. Notifications have a tendency to capture your attention, which can make it harder to focus. In some cases, that might be worth it, but probably not for all of them.

I, for example, like getting notifications when an actual human person that I like is attempting to have a conversation with me, so I leave notifications on for things like text messages and Slack. But I don't need notifications for news articles, which I'm fine reading on my own time. So I make sure to regularly review my notification settings, ensuring only applications I actually want interrupting me can do so. How to do this is going to vary depending on what kind of device you use, but it's typically easy to find in the settings. In Windows, for example, you can toggle which apps can send you notifications in the Settings app under Notifications & actions. 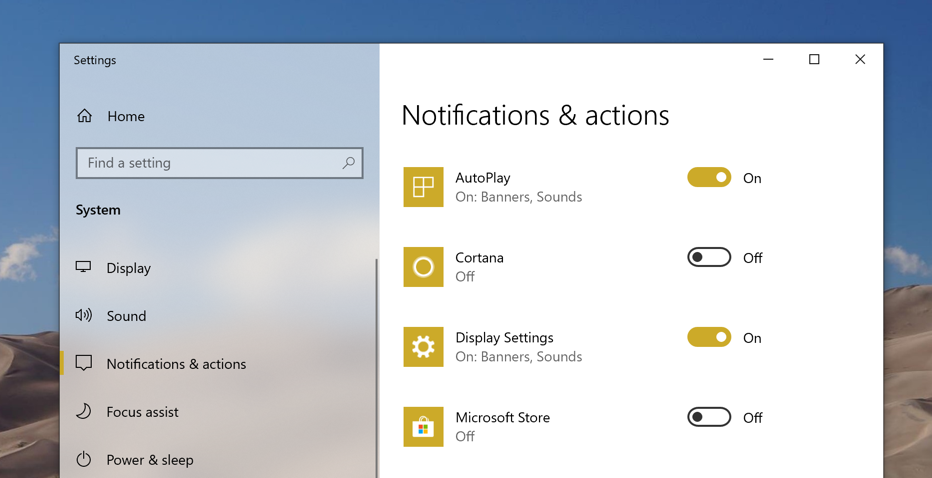 On a Mac, you'll find it in System Preferences under Notifications. 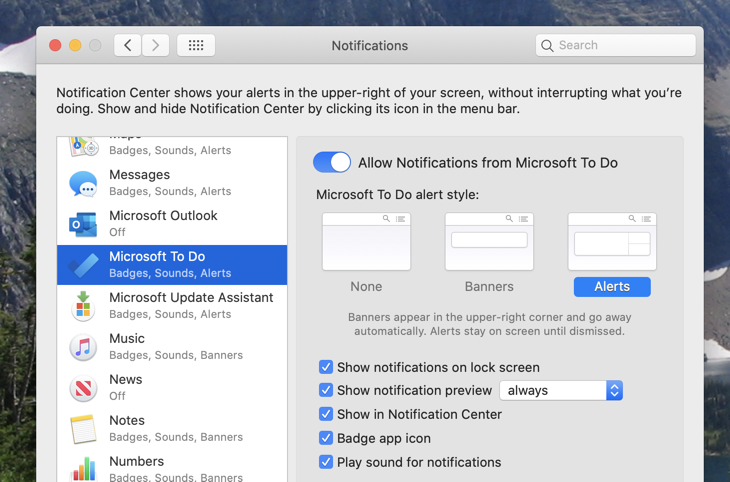 Scroll through these settings, and turn off notifications for apps you don't want interrupting you. It will take some time, but it's worth it. Your attention is the most valuable thing you have online, and notifications are a way of grabbing it. Turning off notifications allows you to protect it.

Related: How to block all notifications on Chrome

Use Reader Mode to block related content and comments

The internet is a pretty cluttered place for reading. Most articles are surrounded by sidebars and floating navigation tools that take up space both on your screen and in your mind. Most of it is there to capture your attention, so you'll click something else. Again, this makes sense, but if your goal is to actually read, this is entirely counterproductive.

You can take back your screen real estate using some sort of reader mode. This feature is magic. In one click, you'll see only the article you want to read, without the various distractions built into most websites. It's really great for mental clarity.

Safari offers this feature natively on both Mac and mobile.

Google Chrome users can install the free Mercury Reader extension on the desktop.

Read it later apps can also pull articles out from a cluttered website, and are a great way to build up a list of in-depth articles to read when you actually have the time to do so.

The internet is a tool that wants to use you

I've talked about how your computer is a tool that you can use, but it's not quite that simple. Every website and app has its own agenda. That's fine, but remember: you also have an agenda. Using the modern web effectively means making sure you're making decisions with that in mind. Fail to do that, and the apps you use will pull you into the mental patterns that suit their interests.