Your Computer Is a Tool. Here's How to Actually Use It Like One.

When's the last time you "surfed the web" or "went online"? I haven't really heard those phrases used unironically since the early 2000s, which makes sense. The internet isn't a place we visit anymore—it's where we all live.

I couldn't help but think about this when I read a beautiful Atlantic article by Ian Bogost , which he wrote using a 30-year-old Macintosh SE. That computer sold for $3,900 in 1990, which is about $8,400 in today's dollars, but people used it a lot less than we use computers today. From the article:

Nobody used [their computer] every hour—many people wouldn’t boot them up for days at a time if the need didn't arise. They were modest in power and application, clunking and grinding their way through family-budget spreadsheets, school papers, and games.

A computer was a tool for work, and diversion too, but it was not the best or only way to write a letter or to fritter away an hour. Computing was an accompaniment to life, rather than the sieve through which all ideas and activities must filter.

Bogost goes on to describe using the Macintosh SE to load Microsoft Word and write the article, and then doing something no one does anymore: turning the computer off. It's striking how much the limitations of the computer forced him to focus on the task at hand. In 1990, the computer was a tool, and people used it like one. Distraction wasn't an issue because hardly any distractions were available (and the ones that were available took forever to load).

I bring this up not to advocate for some lost golden age. Old computers weren't great, and trying to use one for day-to-day tasks would be a nightmare. But there was value in the purpose-driven way we used computers back then, and the hardware limitations were part of what created that mentality. We'd turn the computer on for a specific purpose, complete that purpose, and move on.

It's possible we can never go back to that mindset, but there's no reason we shouldn't think about our relationship with our computers. By remembering that a computer is a tool and implementing some strategies that put it to good use, we can get more done—and then log off.

Plan What You're Going to Do

It's really easy to sit down at your computer and lose a couple of hours doing nothing in particular. You might even feel tired afterward, despite not being sure what you did during that time.

This isn't entirely your fault. The internet is optimized for "engagement," which is a fancy word app developers use for taking up as much of your time as possible. Reed Hastings, CEO of Netflix, once said that sleep is Netflix's main competition, which really drives home the extent to which internet companies want to dominate your day. The apps you use aren't neutral: they have their own priorities.

If you want to use your computer as a tool, however, you need to focus on your priorities, and that means being intentional about what you're doing whenever you're using a device. Time tracking apps are great for this. Most can display the task you're currently working on right on the screen, which is a helpful reminder of what you intend to be doing. I use a time-tracking application for Mac called Timing, but time blocking apps could also do the job.

When I sit down at the computer, I enter the task I hope to accomplish, which then shows up on the menu bar of my Mac. This puts a reminder of my intention in a prominent place.

And you don't need any software for a reminder like this. A sticky note can do the job. 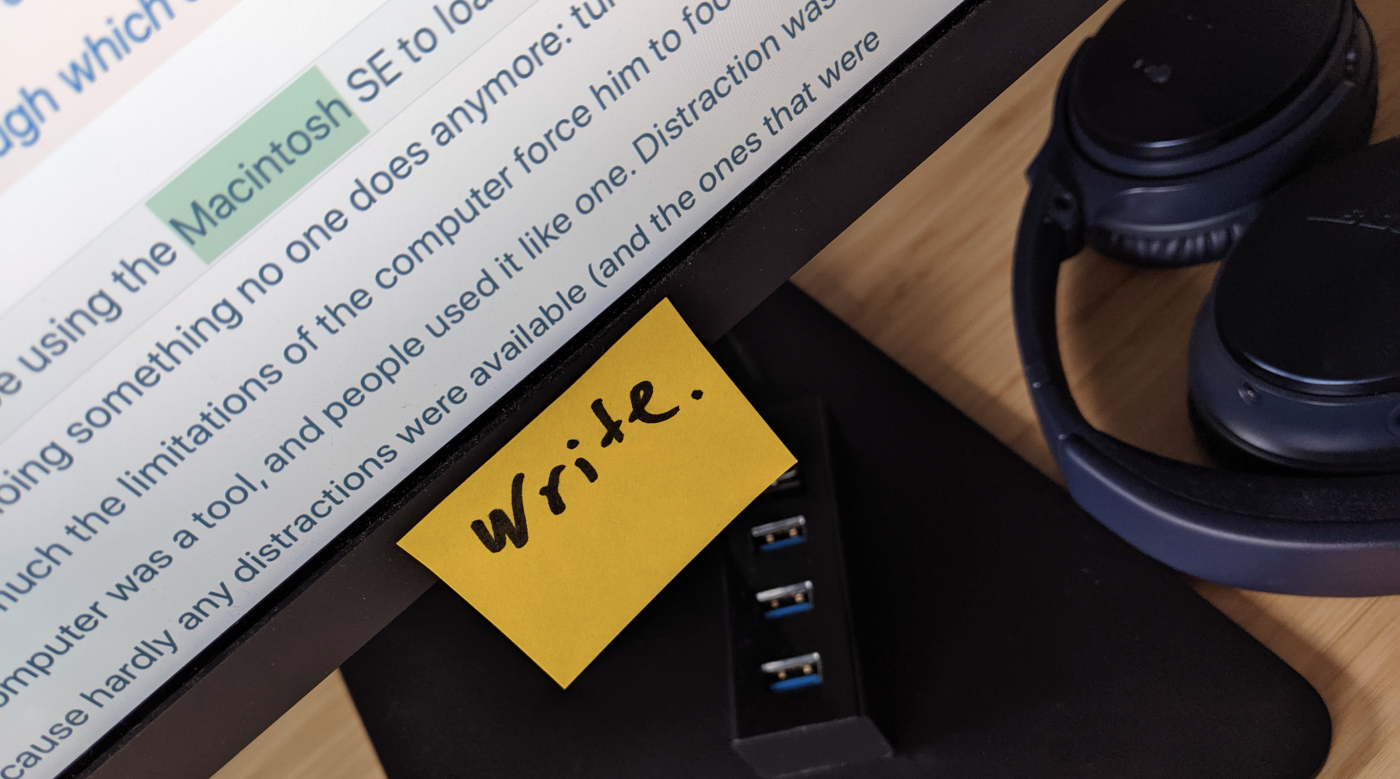 Just write down what you intend to focus on, then put it somewhere you'll see it. The specifics don't matter. The important thing is that you use your computer with a specific purpose in mind, and that you remind yourself what that purpose is.

Go Offline, If You Can

Retro messaging applications like AIM and MSN sorted contacts according to who was and wasn't online, and would even notify you when a buddy "logged on." Modern messaging apps don't do that, and that's a good thing: we'd all be getting notifications constantly. These days, messaging apps sort people by your most recent conversations. The implicit idea: online and offline isn't a meaningful distinction anymore. It's assumed that everyone is online all the time and will respond to you immediately.

Which, of course, means you feel like you have to respond constantly, which makes it hard to treat your computer like a tool you're using for a single purpose. Your attention is being pulled in all sorts of directions, by all sorts of people.

To be clear, chatting with friends and co-workers is nice, and quite often even essential for getting things done. I can't imagine life without Slack. But Slack can also derail focus, as other people's priorities for my day interrupt what I hope to accomplish.

My solution: disconnecting from the internet entirely when I need to focus. Turn off Wi-Fi. It's crude, but it works, and it removes a wide variety of potential distractions, which helps me think of my computer as a tool for the job at hand.

People used computers before there was an internet, and they rarely ended up reading Wikipedia or scrolling through Twitter instead of getting things done. Solitaire was about the only distraction available, which was fine because Solitaire is boring (and isn't even included with Windows anymore). You don't need the internet to use your computer, and you might find your focus improves without it.

Not everyone can do their jobs without an internet connection. If that's you, consider using apps that block distractions instead.

Full Screen Is Your Friend

Multitasking isn't healthy for humans, but modern computers are very good at it. User interfaces go out of their way to show that off. There are windows and tabs, of course, but there's also the Windows taskbar and the macOS dock. Both serve as a constant reminder that there are other applications you could be using. Often there are even little badges with numbers, further incentivizing you to click away from the task at hand.

Which is why I recommend that you switch your application over to fullscreen when focus is needed. Mac users have it easy: they can simply click the green button in the top-left corner.

Do this and the current application will take up the entire screen, hiding the dock, menu bar, and all other applications. It's perfect for when you need to focus.

Windows users don't have a system-wide option, though many applications offer a fullscreen mode. The keyboard shortcut Alt+Enter triggers fullscreen in many apps, and F11 works in others. If fullscreen isn't offered, you could just hide the taskbar instead.

It's About Your State of Mind

Ultimately this is about you. You need to approach your computer, and other devices, as a tool for accomplishing a specific job, then be intentional about using it for that job. It's a skill, and learning it takes time.

Want more ideas for doing that? My friend Matt wrote about tweaking your software to be more productive, and I recommend you check that article out. Here are a few more things you can try: