How to type a long dash on a PC or Mac

There are two kinds of writers: those who like em dashes and impostors.

And yet, for some reason, there's no em dash key on a keyboard. We live in a world where the underscore is represented, but the em dash is not. It's upsetting, to be honest.

Everyone has an opinion about how to use em dashes—and their shorter cousins, en dashes—but let's ignore all that and just talk about how to type them.

Make an em dash or en dash with a keyboard shortcut

On Windows it's...less simple: you need to use an alt code to get an em dash. If you have a numeric keyboard, hold down the Alt key and type 0151 for an em dash or 0150 for an en dash. And that series of words was so profoundly absurd that it gave me a migraine.

An easier (but no less infuriating) method is to open the emoji keyboard. Press Windows + Period (.). You can find your dash of choice under Symbols. 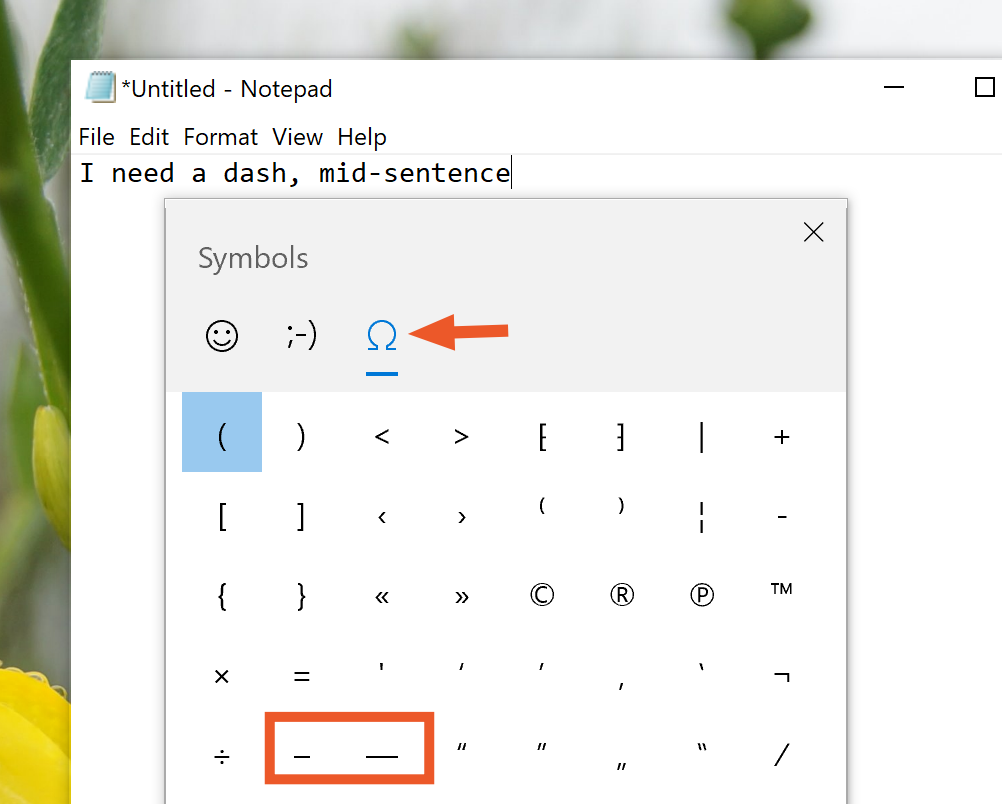 This only gives me a slight headache, granted, but I'm somehow even more annoyed than before.

There's some relief, but only if you're working in Microsoft Office apps like Word or Outlook. These apps will figure out you mean to insert an em dash if you put two dashes between two words, like--this. Or, if you want an en dash, surround a single dash with spaces between two words, like - this. Any Microsoft Office app should figure out what you want and insert the correct dash.

Why doesn't Microsoft make this a system-wide setting in Windows? I don't know, and you should ask them, on Twitter, daily. Maybe they'll fix it. For now, though, let's check out some potential alternatives.

Windows doesn't offer a quick way to make these dashes, so you'll have to add your own. You could leave an open notepad with an em dash, to copy and paste—that's what my editor used to do when she had a PC. Text expansion apps are a better tool for the job, though.

These apps automatically replace custom keywords with whatever you want. It's a great time saver, particularly if there are things you wind up explaining to coworkers or customers multiple times a day.

Want to learn more about how useful text expansion apps can be? Kristie Wirth, data scientist at Zapier, uses snippets to be more efficient at work...and dating.

You can also set up a rule to quickly make dashes. PhraseExpress, which is free for personal use, works quite well for this. Install the app, then make a phrase that creates your desired dash. Like this: 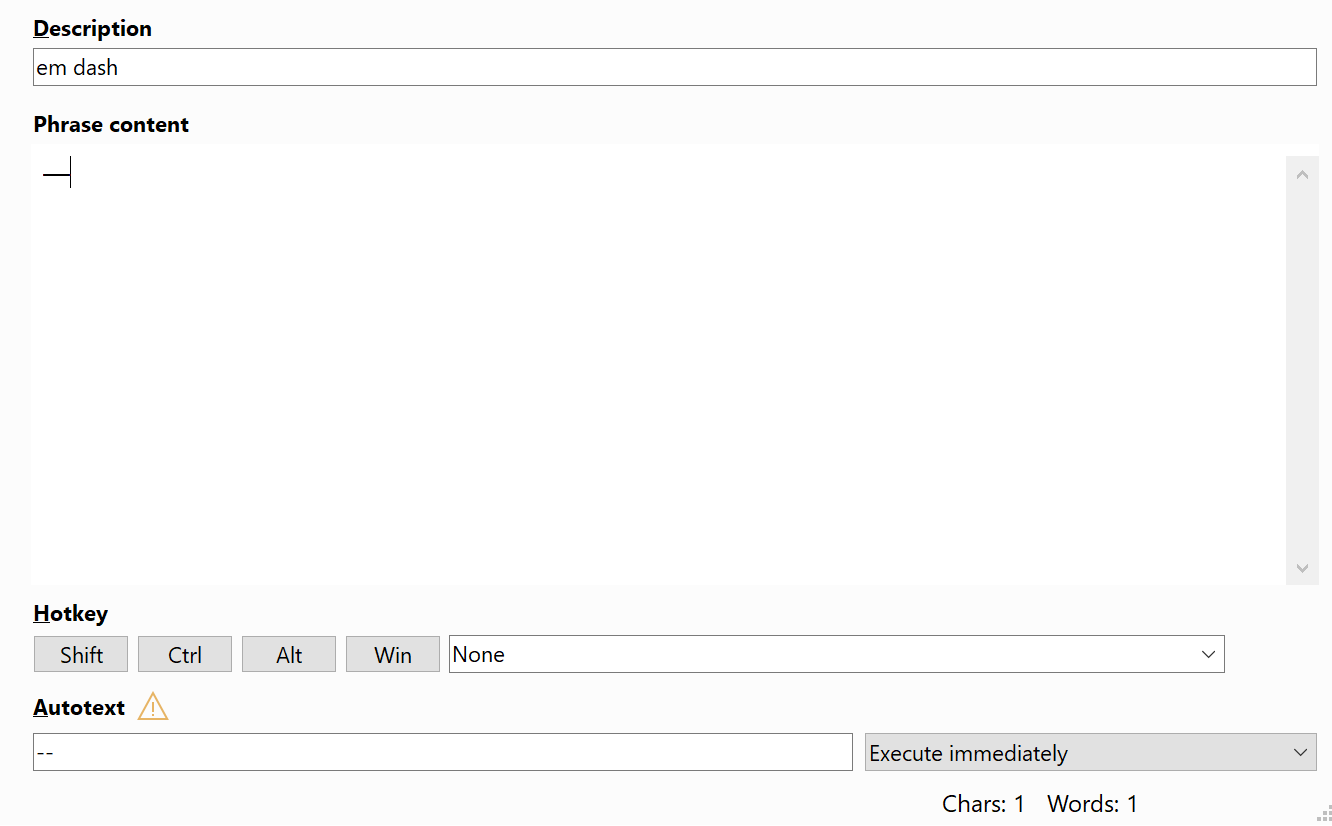 Put the em dash in the Phrase context box, then put your trigger characters in the Autotext box. I used two dashes, like this: --. You can use whatever trigger you want. Finally, click Execute immediately in the dropdown. You're set. You can now quickly make an em or en dash in any app.

Want a dedicated key for the em dash? Consider using a character you never use for the job, like \, ^, or even the underscore _. That one looks like it should be the em dash key anyway.

If most of your writing happens in Google Docs, good news: Google Docs has an autoreplace feature, which you could use instead of a system-wide tool.

Don't want to go through the trouble of setting up a text expansion app just for dashes? I get it. Em-n-en is a dedicated tool for the job, and it works quite well. Just install it, and you'll have a few options for making dashes. 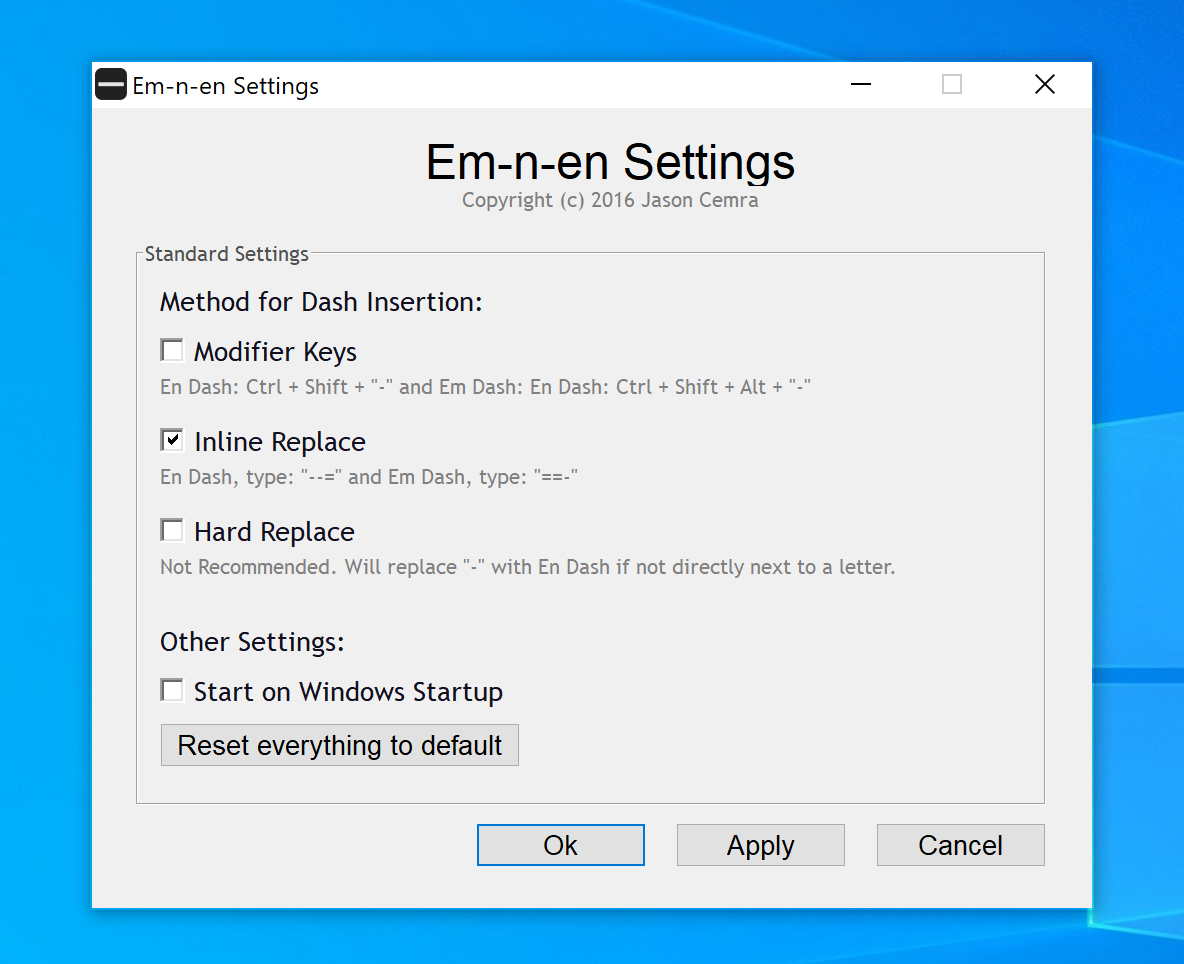 There are keyboard shortcuts for making the dashes, similar to the ones Macs offer by default. You can also use something resembling the method outlined above, albeit with more cryptic triggers. Here's how that works:

Or, if you're truly hardcore, you can remap the regular dash to the en dash. (This will probably break something.)

It shouldn't be this hard. I sincerely hope that, someday in the near future, Microsoft will make a change to its operating system that makes this article completely useless. For now, though, I hope these tips helped you type dashes. Fill your work with far too many of them.