How the Zapier Team Uses Airtable

How the Zapier Team Uses Airtable

The secret's out. Here at Zapier, we have a major app crush on Airtable, an easy-to-use relational database. Over the past year, Airtable has emerged as an app darling across the Zapier team, used by nearly every team from data science to product marketing. We even have an Airtable emoji in Slack. 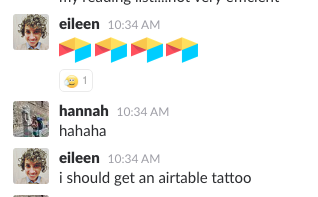 You could say the Zapier team is enthusiastic about Airtable

Airtable topped the charts as the fastest growing integration on the Zapier platform in 2016, so we reached out to our users to discover how they are automating their work. We chatted with 14 teams who store, organize, and collaborate on everything from dance auditions to food order deliveries using Airtable and Zapier. Along the way, our own team chimed in with the workflows they've built to get more done, faster. And now we're sharing those stories with you!

So without further ado, here's how four members of the Zapier team are using Airtable and automation to organize their life's work.

Want the highlights? The Zapier and Airtable teams hosted a webinar to chat about some of the cool use cases mentioned in this post. Here's the recording, in case you missed the live webinar.

Predicting the Next Unicorn

With partnerships with more than 750 apps, it's essential for Zapier to stay on the pulse of what's hot in the app landscape—both to prioritize feature development with existing partners and to proactively reach out to up-and-coming apps not yet on the Zapier platform. Data scientist Russell Pierce uses Airtable to track partner popularity on Twitter and help inform platform development.

"Apps whose Twitter followers are growing in proportion faster than their Zapier users are apps that we want to reach out to or focus on improving," says Pierce. 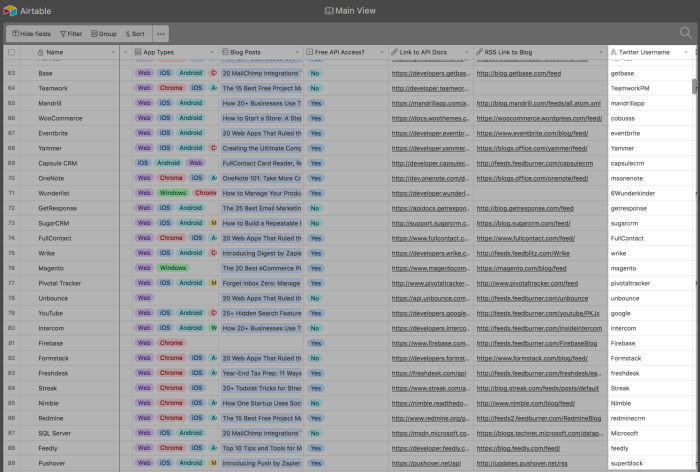 The data science team uses Airtable to track partner popularity on Twitter, powered by a Zap

The team manages a master base with records of every app on the Zapier platform. That base has a field for Twitter handles, which are input by a freelancer—since adding data is as simple as typing in a spreadsheet, there's no fear of overwhelming a non-technical freelancer. Once the Twitter handles are entered, Pierce accesses that list via Airtable's API and then sends a webhook that inserts the Twitter data automatically into another database for further analysis by the research team. From there, the team can make a shortlist of partners that may need more attention.

Launching the Next Big Thing

In addition to connecting the apps you use every day, like Slack, MailChimp and Trello, there is also a set of Built-In Apps created by the Zapier team that anyone can use in their workflows, like email, SMS, and a mail parser app.

For Joe Stych, who leads product marketing at Zapier, making sure users know about these tools and are equipped to harness their power is top priority. He's been at Zapier for two years and transitioned from managing project launches with task lists and text documents to queuing up a successful launch using Airtable.

This past year, Stych led the charge on two new product launches for Zapier: Push, a Google Chrome extension to trigger automated workflows on the fly, and Digest, which lets you build custom summaries of the things you care about and deliver them on a schedule. Because there's a long list of to-dos for each new product release, recalling the activities for a previous launch can be a challenge.

Now, there's a Zap for that, so Stych doesn't need to rely on memory to execute a strategic launch. Whenever a new product launch is added to his master calendar in Airtable, Zapier automatically creates a list of standard marketing activities for that launch in a separate table, with filters that decide whether to continue based on the priority of the new launch. Then, with Airtable's database-style linked fields, he can connect the data to organize what's on deck.

"Before I started using this Zap, the process of coming up with marketing activities for a launch was a scramble to try and remember everything we did last time," says Stych. "Now I have a list that's generated for me automatically."

The best business decisions are based off data, not hunches. Product manager Chris Geoghegan uses Airtable and Zapier to establish and automate a feedback loop that guides decision making on new product features.

To gauge customer interest in a new feature, team accounts, Geoghegan placed a survey on the Zapier pricing page. When a prospective customer filled out the form, powered by a Typeform, a Zap automatically transferred their response to an Airtable base.

That Airtable base was set up to automatically sort and filter the entries for customers who were interested in both a paid plan and a team account. Once the record lands in a specific view, an Airtable formula pulls out the customer's first name and domain. From there, Geoghegan simply checks a box in that record to trigger another Zap, sending an email to that user requesting a quick chat about team accounts. Not only does this workflow ensure that the product team is building a feature that Zapier users really need, but storing the feedback in Airtable ensures valuable feedback is accessible to the whole team and doesn't slip through the cracks.

Tracking Entertainment in a Personal Database

Brownman uses Airtable to track his gaming, reading, and concert-attending habits. Why? Well, for a data junkie, the better question might be, why not?

"I mostly keep track for my own personal interest," says Brownman. "It keeps me more organized and is invaluable when writing lookback pieces about what I've seen, played, or read."

Using a gaming platform called Steam(not yet available publicly on Zapier--stay tuned!), Brownman can track new video game purchases with a Zap. Whenever he buys a game on Steam, Zapier automatically adds that game to Airtable and tags it appropriately. Then, when he plays that game for the first time, the timestamp is added to a table in the base. 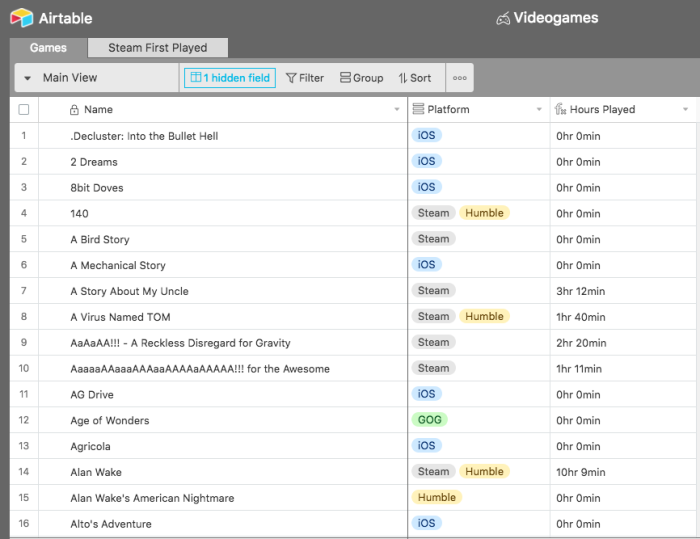 The Zapier team uses Airtable for work and for play

Want to be the first to know when new apps like Steam are available on Zapier? Sign up for our Updates Blog for news on the latest apps, Triggers, and Actions added to Zapier.

To keep tabs on his reading list, Brownman uses personal automation tool Workflow. When he cracks open a new book, he posts a webhook to Zapier that shares the book to Airtable and Wunderlist. When finished, he checks it off in Wunderlist, triggering Zapier to update the date field in Airtable. From there, Airtable calculates the average words per day, which Brownman might use as an indicator of subject or author interest. 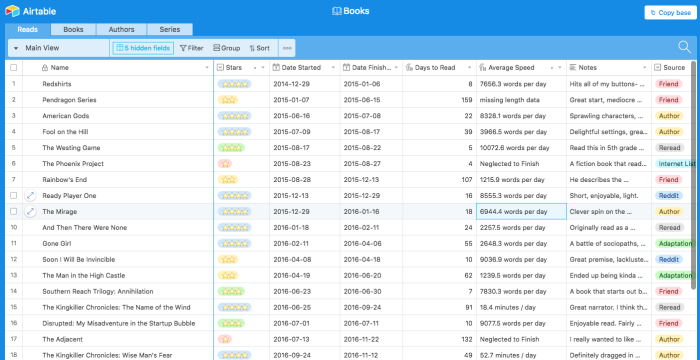 Every team is different, and these are a just a few of the ways the Zapier team uses Airtable every day. Are you or your team harboring a secret crush on Airtable too? We can't blame you. Get your motor running and build your own Airtable workflow on Zapier or try out one of the automations in this article to get started.

Kim Kadiyala is a Zapier marketer and Hyper Island alum.