Screenshot Tools, Tips, and Shortcuts: How to Capture Anything on Your Screen

The Best Screenshot Apps and Shortcuts

Screenshots are the simplest way to show off your new program, point out a bug, and save that picture on Facebook to your camera roll. They're the easiest way to save anything on your screen. And they're so integral to the way we work, every operating system comes equipped with a screenshot tool.

But screenshots aren't always simple. If you aren't careful, screenshots can accidentally expose private information or obscure the part of a website you need to share. Built-in screen capture tools often hide behind cryptic keyboard shortcuts. And when a picture alone won't cut it, you'll need to make a video or GIF to show what's happening on your screen.

Here's the guide you need to take the best screenshots everywhere:

Introducing: Zappy by Zapier, a screenshot tool for macOS that helps your team share what you see in a snap. With easy-to-use annotation tools, Zappy can help you collaborate with your teammates fast. Quickly capture and share screenshots, GIFs, and recordings for free. Learn more about Zappy.

Why should you care about taking high-quality screenshots? Because now, more than ever, we speak through pictures.

Photography used to be a time-consuming, expensive endeavor. You'd try hard to make each picture count. No one ever took photos of their parking spot to keep from losing their car, or of a price tag in a store just to comparison shop.

Smartphones changed that. Now everyone carries a camera, and pictures are for more than special occasions. Sure, we take pictures of sunsets and babies, but also of receipts, our refrigerators, street signs, and ourselves (lots of pictures of ourselves).

Screenshots are the perfect way to save a picture of anything on your screen.

Screenshot tools let you do that with your digital life. You might photograph something to remember or share it—and you'll screenshot for the same reason. Screenshots are the simplest way to share your screen with anyone, anywhere. Whether it's a cute Facebook photo, a tricky bug, or a quickly-deleted Tweet from a politician, everyone has reasons to take screenshots.

But you still need to take quality screenshots—especially if you're using them at work, or for your customers. Here are some quick tips on grabbing superior screenshots. Then, we'll dive into the nuts and bolts.

How to Take High-Quality Screenshots

Screenshots are more than just pictures of software—they're pictures of your workspace, with all the info you might see right now. That's why you shouldn't just snap a random screenshot.

Think carefully about what's on your screen and why you're shooting it, to make sure your screenshots are perfect for their intended purpose. Here are a few pointers:

Say I'm writing a blog post about how to edit documents in Google Docs. I'll take a screenshot of my full browser, with an article I'm editing open in Google Docs. Then, I open the screenshot in Apple Preview on my Mac (or perhaps in Microsoft Paint on a PC), delete the email address from the top corner if I hadn't already removed it via Inspect Element, and perhaps add an arrow to point out the New Changes button to show readers how to see previous versions of their work. I'll finally crop the image to show only the essential parts before adding it to our blog post.

There's a reason for everyone to take screenshots today—and tools to capture them on almost every device. Here are steps for taking screenshots on most modern computers, smartphones, and more.

How to Take Screenshots on Windows

Windows PCs make it so easy to capture screenshots, there's a dedicated key on your keyboard for it: PrtScn (or Print Screen or PrtSc, depending on your keyboard). Tap that key, and Windows will copy a screenshot of your entire screen to your clipboard, which you can then paste into a document or blank Paint canvas to save.

Have a Microsoft Surface tablet or laptop? Instead of the PrtScn key, here are the keyboard shortcuts to use:

→ Find more Windows screenshot tools and shortcuts, including how to capture video and timed screenshots, in our Windows Screenshot Guide.

How to Take Screenshots on Mac

Macs don't come with a screenshot button, but you can still capture anything on your screen with the default Mac screenshot keyboard shortcuts:

→ Find more macOS screenshot tools and shortcuts, including how to screenshot the Touch Bar, capture video, and include the mouse cursor in your screenshots in our macOS Screenshot Guide.

How to Take Screenshots on Ubuntu

Taking screenshots in Ubuntu—one of the most popular Linux desktop distributions—works almost the same as on a Windows PC. You'll likely use a standard Windows keyboard with Ubuntu, so the PrtScn key is still the easiest way to take a screenshot. The only difference is, on Ubuntu, PrtScn will capture a screenshot, then show a dialog where you can choose to copy the screenshot to the clipboard or save it to your computer.

The selection tool will change your mouse cursor to a crosshair, which you can use to select a rectangle of your screen to capture.

Tip: If your keyboard doesn't have a PrtScn key, you can set a custom shortcut to take screenshots in Ubuntu from the Keyboard options in your System Settings.

Ubuntu also includes a Screenshot app, which works much like the Snipping Tool in Windows. It can capture a specific window or just a section of the screen—and can also show or hide the mouse cursor and window interface.

See all standard Ubuntu keyboard shortcuts in the Ubuntu documentation.

How to Take Screenshots on Chrome OS

When you only need web apps, Chromebooks are a great—and cheap—alternative to traditional laptops. And they, too, let you take keyboard shortcuts, using the window switcher key like the one in the icon above or the F5 key on traditional keyboards.

How to Take Screenshots on iOS

One of the reasons screenshots are so popular today is that they're easy to capture and share your phone. On an iPhone or iPad, press the home button and the power button at the same time, and iOS will save a full-screen screenshot to your Photos app. Screenshots are automatically saved to the Screenshots album, so you can see all screenshots in the same place. In newer versions of iOS, you'll see a preview of your screenshot as soon as you take it—tap that to annotate and share the screenshot directly.

How to Take Screenshots on Android

For screenshots, at least, Android and iPhone are pretty similar. On Android, press the power and volume down button at the same time for a moment to save a screenshot to your Photos app under Screenshots.

That's the default on Android, and should work on any Google Pixel device and many other Android phones and tablets. But since there are many Android variations out there, your specific device may have customized shortcuts for screenshots; Samsung Galaxy devices, for example, have you press the home and power button to capture screenshots, as on an iPhone.

How to Take Better Web Screenshots 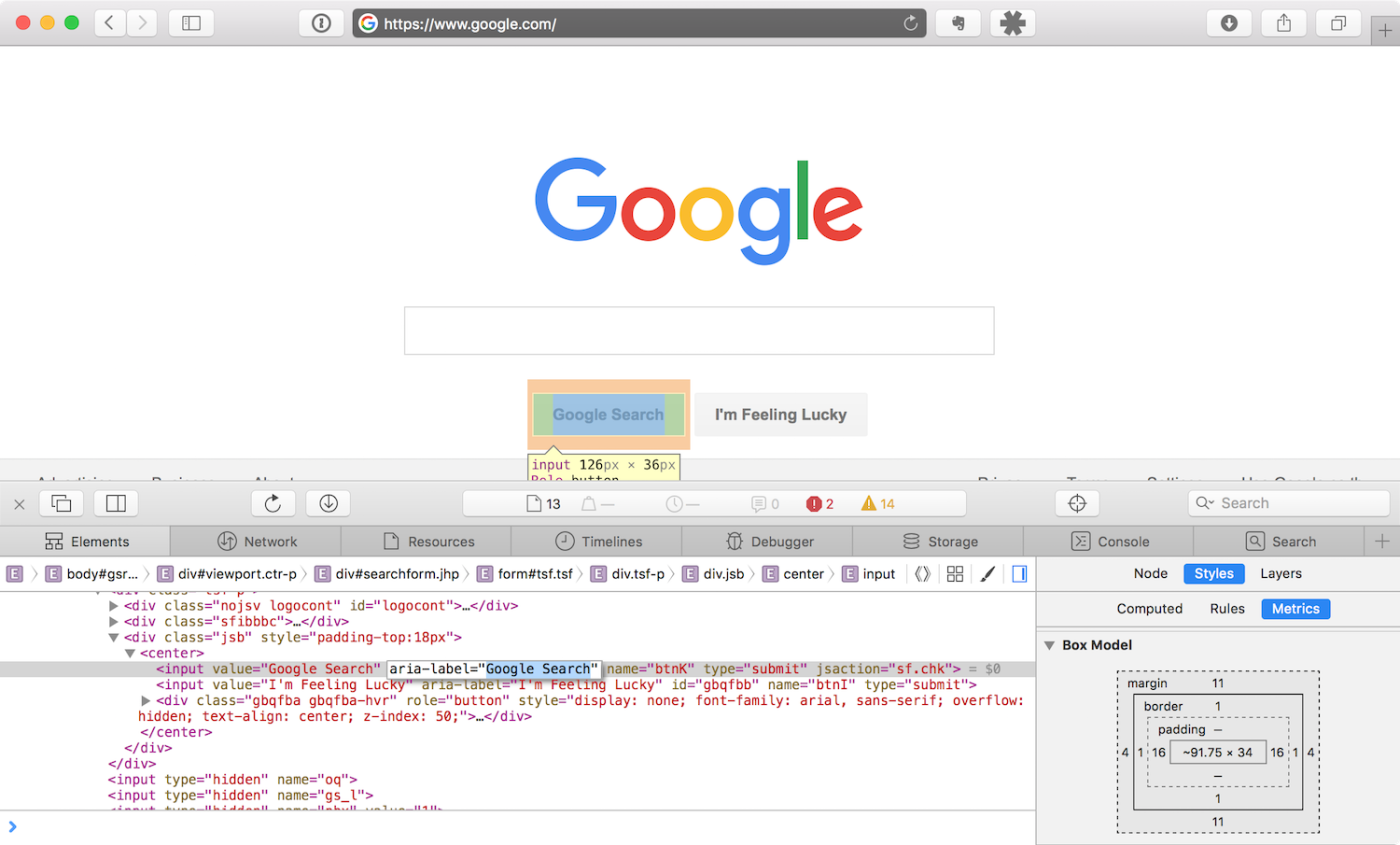 Need to take a screenshot of a webpage? The default screenshot tools on your computer should be plenty in most cases. The only problem is, most web apps show your name or email address in the top right corner, along with other private info you might not like to share.

You could blur the sensitive info in Photoshop, but a cleaner, more professional option is to use Inspect Element. Just right-click on a webpage, click Inspect, then click the selector tool and click on the part of the webpage you want to change. You can then replace the text on the web page, perhaps with a generic email address instead of your real address. It's a simple way to hack the web, for a good cause. 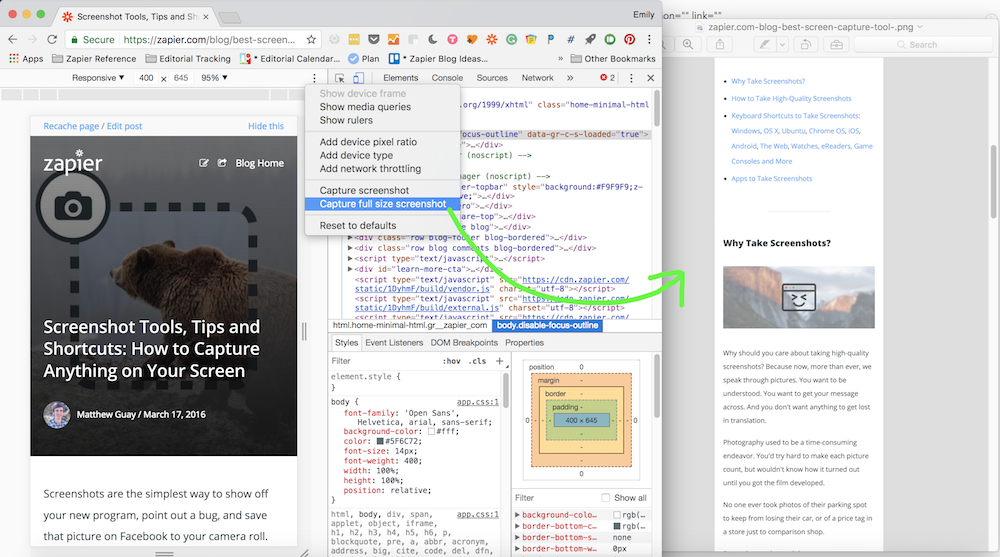 Need to capture a full-page screenshot of a website? You can do that from Chrome's Developer Tools as well.

Just open the Developer Tools by pressing Alt + Command + I on a Mac, or Ctrl + Shift + C on Windows. click the mobile device icon in the far left corner, then click the 3-dot button and select Capture full-size screenshot.

Check out this tutorial on how to capture full-page website screenshots in Chrome for more details. 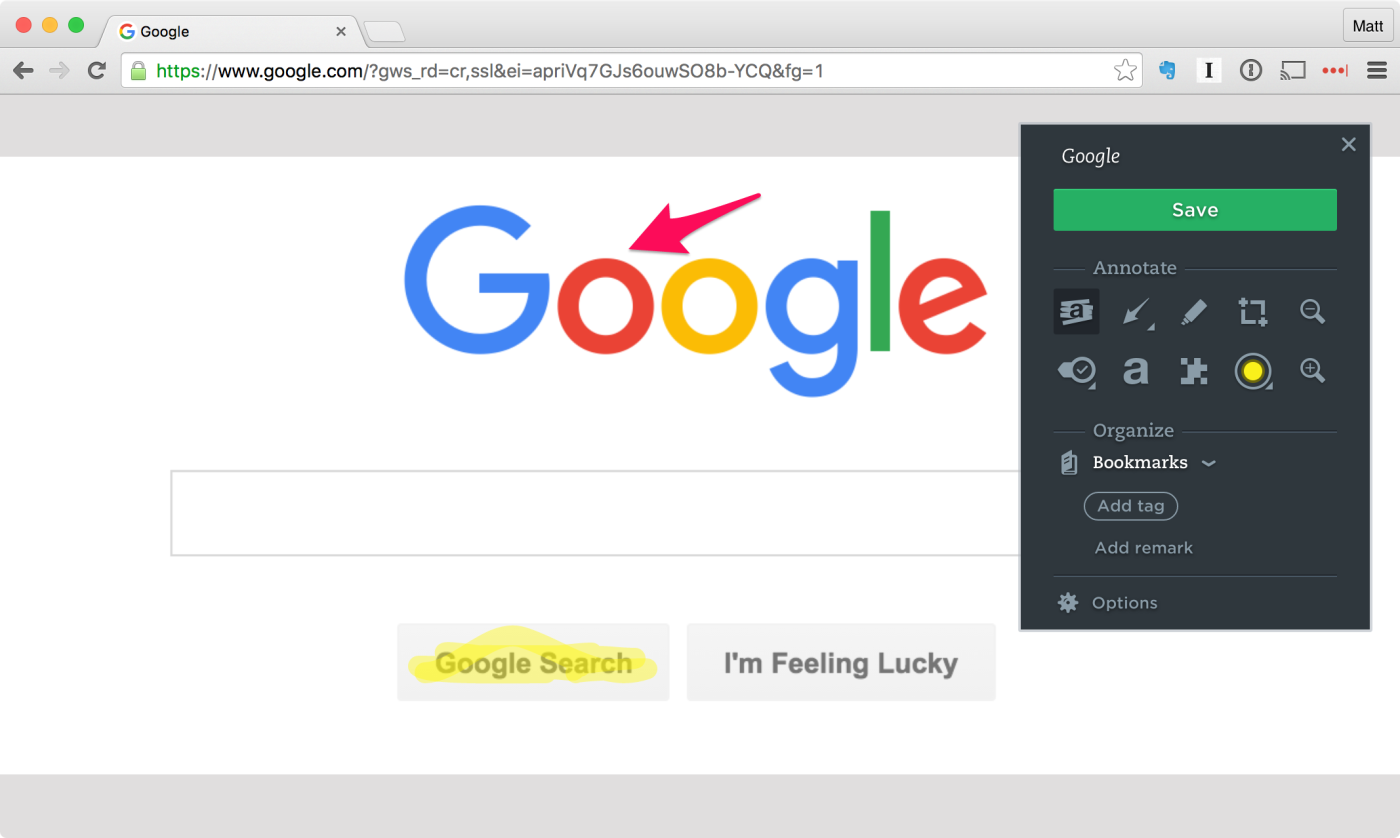 Or, if you'd like to annotate a screenshot with arrows and highlights, the Evernote Web Clipper is a handy tool. Click it, then select Screenshot and drag your mouse over the part of the page you want to save. You can then add annotations, and save or share your tweaked screenshot.

How to Take Screenshots on Other Devices 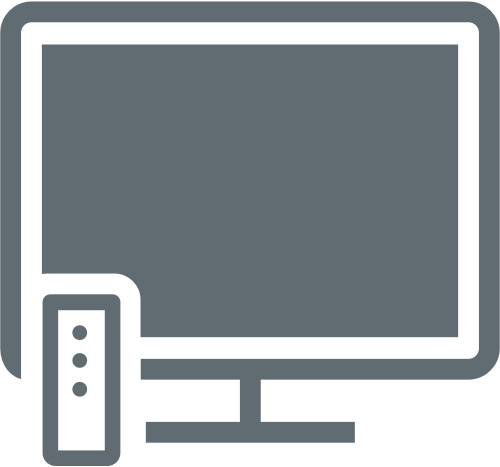 Want to take a screenshot on your eReader, gaming device, watch, or car? Here are some tips on how grabbing the display from almost any smart device you can imagine:

For everything else—smart fridges, thermostats, TVs and more—you'll likely need to use the old take a photo of the screen trick.

12 of the Best Screenshot Apps

Want more from your screenshots—perhaps a quick way to share screenshots instantly or add annotations? Here are some of the best tools to take great screenshots on your computer:

How to Edit Screenshots

There are a few tools in common photo editing apps you should keep handy when editing screenshots:

Put Your Screenshots to Work

Now that you can capture professional-grade screenshots, it's time to use them for more than just saving funny images from Facebook. Here are some ideas for putting your screenshots to work, inspired by how we use them at Zapier.

Originally published March 17, 2017; updated September 4, 2017 and August 8, 2018 with updated steps to take screenshots on every device, along with new app pricing and features.