Find the right Mac RSS reader for your workflow.

RSS feeds are the ultimate power user tool for keeping up with the news, and if there's one thing a power user can't stand, it's clumsy software.

Learn how to level up your RSS feeds
Automate your RSS

For Mac users, that means the best choice is a native macOS RSS reader. Sure, you could use a web-based RSS app to keep up with your feeds, but they're going to be slow and clunky compared to an actual Mac app—which is probably why there are so many Mac RSS apps on the market.

I tested every macOS RSS app I could get my hands on, and most of them were...not great. A few stood out, though, so here are the three best RSS readers for Mac.

RSS feed hard to locate? See our tips for how to find the RSS feed for almost any site.

The best RSS readers for Mac

What makes a great RSS feed reader for Mac?

I live in my RSS reader. I'm a full-time journalist and blogger, meaning I need to keep up on what's happening—and RSS is how I do that. I've also reviewed software in general, and Mac software in particular, for over a decade.

For this review, I only considered traditional RSS readers—that is, apps that allow you to add any RSS feed you want. News apps that don't allow this, like Apple News, weren't considered. Neither were apps that don't offer a full reading experience, such as browser extensions or menu bar widgets.

With that in mind, the best Mac RSS readers:

I considered over a dozen apps for this article, and the three below are the ones I'd recommend.

The best RSS reader for Mac for its design 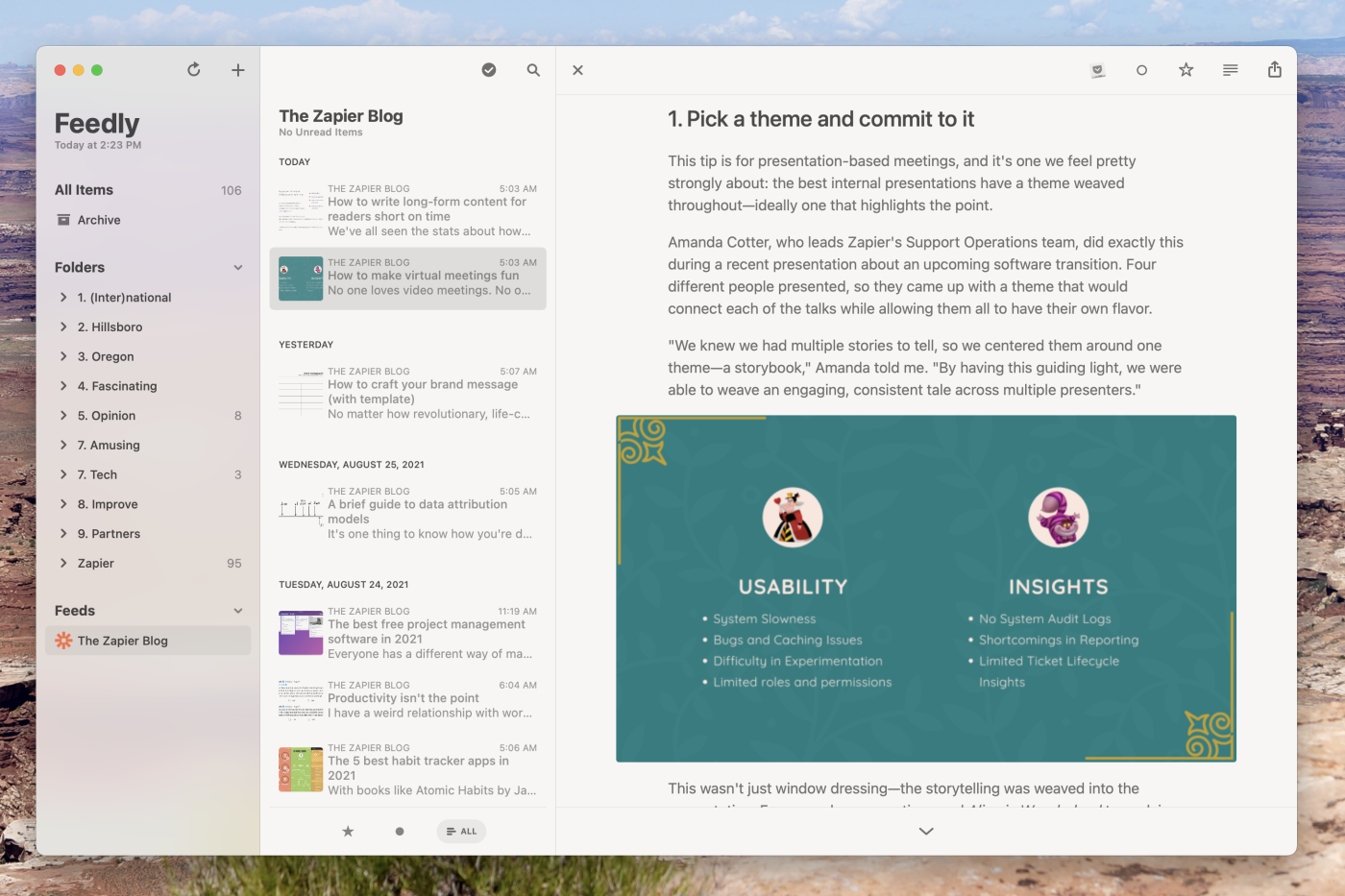 Reeder is beautiful. That's self-evident in the screenshot above: the typography, the semi-transparent left panel, and the layout all draw the eye quickly. What I love, though, are the small touches that aren't obvious in a single screenshot.

The app has three panels, like most RSS apps: feeds on the left, a list of articles in the middle, and the current article on the right. But unlike any other app I tested, Reeder will hide panels depending on how big the current window is. This means you can shrink the window to the side of your screen to only see the current article, which is ideal if you're taking notes in another window. It's a small thing, sure, and one that some users will never notice. There are so many little touches like this, which is what makes Reeder great.

None of this would matter, of course, if the reading experience wasn't also great. It is. Articles are downloaded for offline reading, and you can even opt to keep weeks or months of read articles on your machine for future reference. There's support for pulling in the full text for any article using a keyboard shortcut or button. You can even configure Reeder to grab the full text of any feed by default.

And there are more customization options. Every single keyboard shortcut can change, for example, and you can also set keys to quickly share articles on apps like Twitter or Pocket. You can also set up touchpad gestures.

Syncing is well-supported. There's a native iCloud syncing feature, which you can use to sync directly to Reeder on other Macs or any iOS device. Or, if you prefer, you can sync to every RSS service you've heard of and a few that you haven't: Feedbin, Feedly, Feed Wrangler, FeedHQ, NewsBlur, The Old Reader, Inoreader, BazQux Reader, FreshRSS, and Reader. There's also support for syncing from two of the best read it later apps, Pocket and Instapaper, meaning you can use Reeder for all of your reading if you want to.

I could go on much, much longer than this, but I'll leave it at this: Reeder is, far and away, the best RSS app I found for Mac. 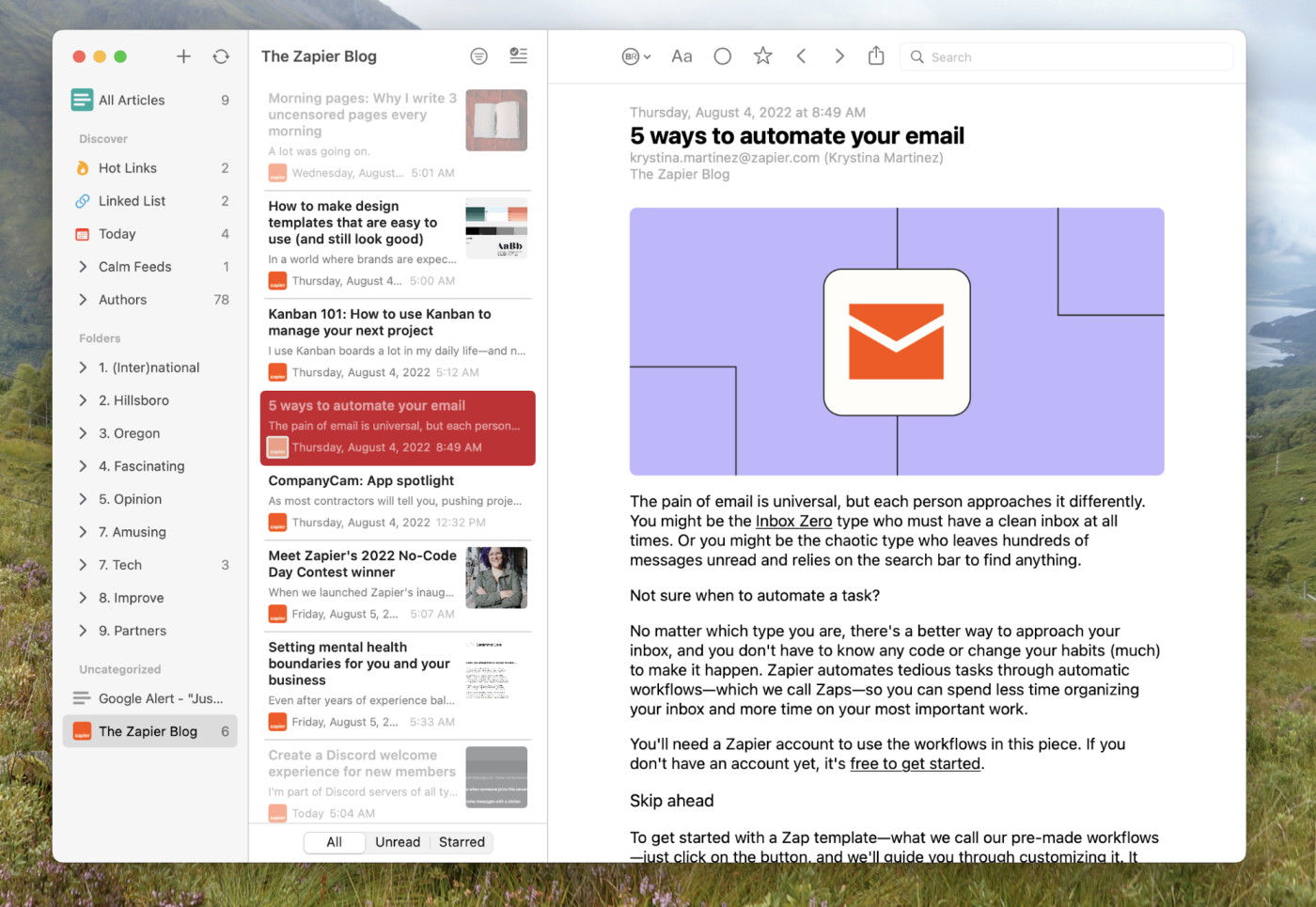 Most RSS feeds offer a headline and a small snippet of the article—not the full text. The other applications on this list can pull in the full text of any article using third-party scripts, but only lire has a built-in engine for the job. Even better, full-text versions of all articles aren't just an option—they're the default. This makes lire the ultimate offline RSS app, because you can read the complete text of every article in your feed without any sort of internet connection.

You can sync via iCloud to other devices running lire, or you can sync to web services, including BazQux Reader, Feed Wrangler, Feedbin, FeedHQ, Feedly, FreshRSS, Inoreader, Miniflux, NewsBlur, Nextcloud News, The Old Reader, and Tiny Tiny RSS. Lire also offers a few features I've never seen in an RSS reader, like the ability to browse articles by author (you can even pin your favorite authors) and the ability to export any article as an eBook file.

If you do most of your reading offline, check out lire first. It will work just the way you want out of the box. It's not quite as powerful (or pretty) as Reeder, granted, but it's the best app for reading RSS feeds offline. 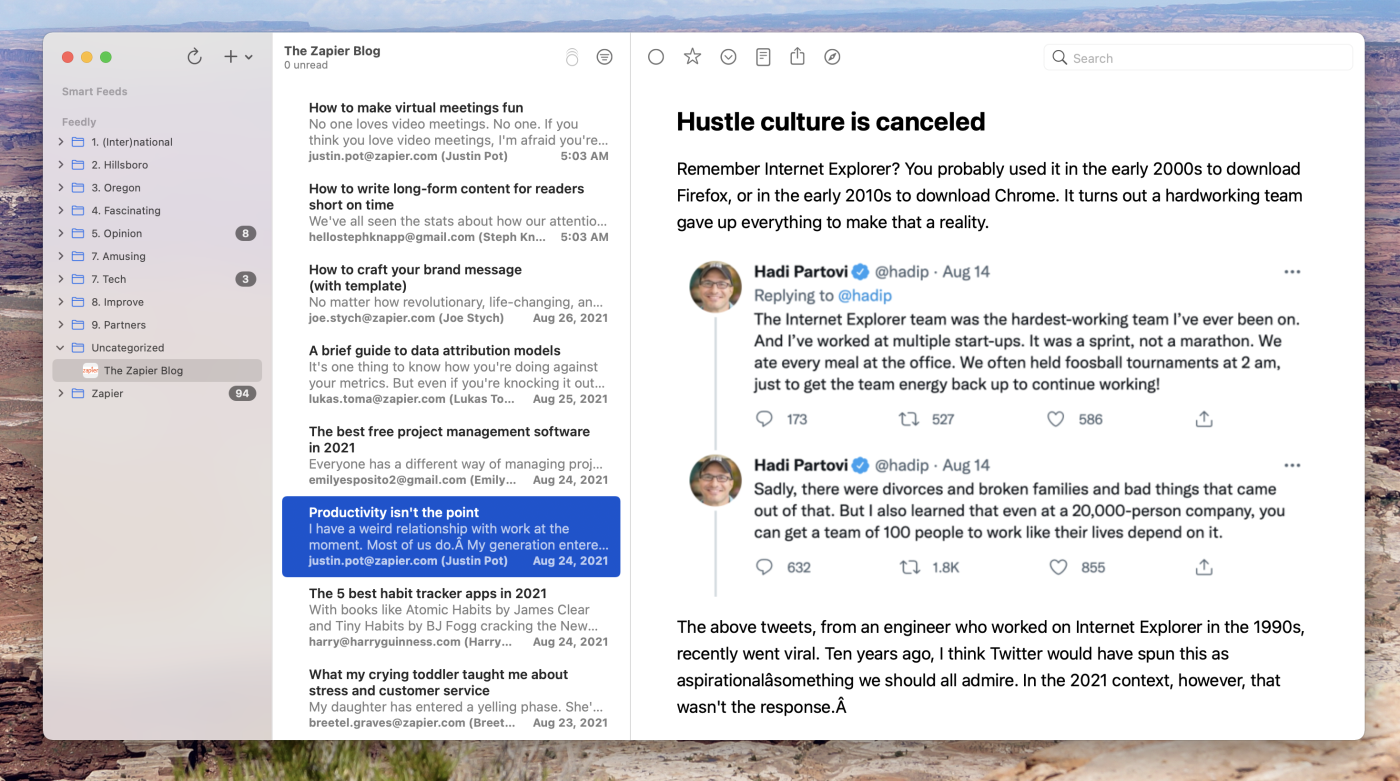 I don't think NetNewsWire measures up to Reeder or Lire, but that doesn't mean it's not great. It's a no-nonsense Mac RSS feed reader with almost every feature most users need, and it's completely free. It's hard to complain about that.

You might have the impression that NetNewsWire stopped existing sometime in the early 2010s, and to be fair, it wasn't actively maintained for a few years. In the past couple years, though, the app has been totally overhauled.

It fits right in on the modern macOS desktop. The user interface is modern, there's support for offline reading, and you can pull in the full-text version of any article. And there are a few features not available in other apps: you can subscribe to Reddit and Twitter feeds in addition to RSS, for example. You can sync to Macs and iOS devices running NetNewsWire via iCloud, and there's also support for syncing to third-party services like BazQux, Feedbin, Feedly, Inoreader, NewsBlur, The Old Reader, and FreshRSS.

If you're not sure which app to use, start with NetNewsWire. There's a good chance you won't find any reason to switch.

A few other options

The above three apps cover just about every type of user who wants RSS for Mac, but here are a few more things to try if none of them are quite what you're looking for.

This article was originally published in September 2021, and the most recent update was in August 2022. 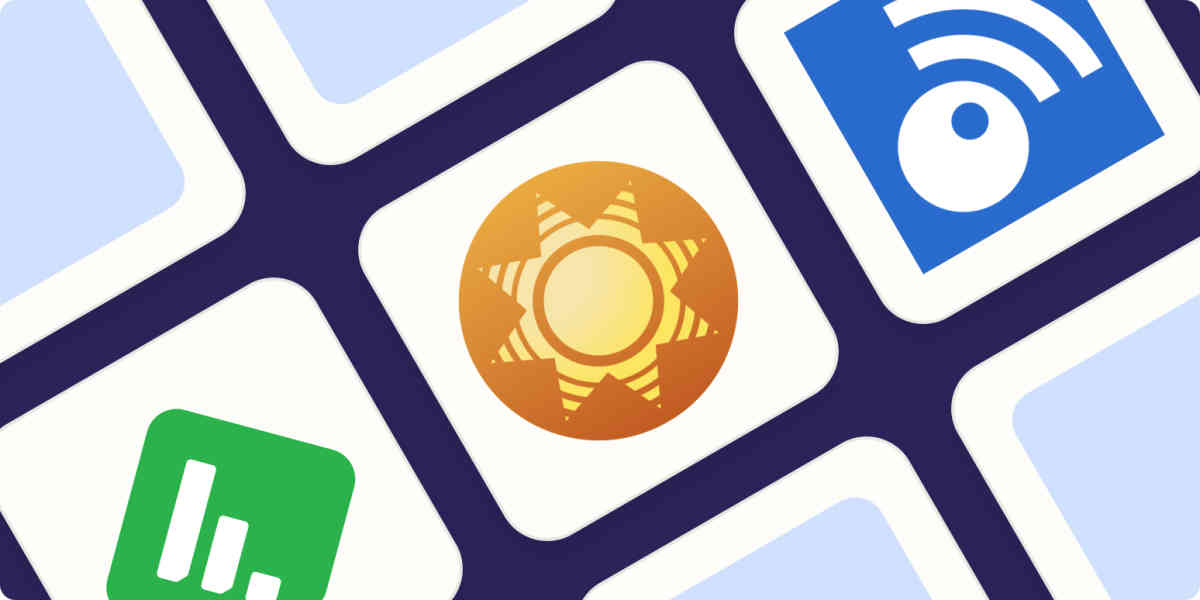 When you want to follow specific writers, publications, and channels—to see every piece of content they publish—nothing beats an RSS reader app. RSS apps access web feeds published by websites, letting you aggregate and curate content you care about.