Be More Assertive With This Tech Trick

How one woman improved her writing and assertiveness

Do your word choices inhibit your ability to be effective at your job? Do your friends and family think you're wishy-washy? Being assertive through language doesn't come naturally to everyone. Unassertive people often rely on hedging words and phrases that make what they say less definitive and less direct. Instead of saying, "The solution is..." you might soften the sentence to "I think the solution is... ." Instead of affirming "I will do X," you might say you'll "try" to do it.

Kristie Wirth is an associate data scientist at Zapier. Soon after she joined the company, she took a workplace assessment and scored 10 out of 99 on assertiveness. She decided to do something about it.

"Being new to Zapier, I felt vulnerable with that score," she said. "This is an awesome place to work. I'm moving up, career-wise, and I want the way I communicate to reflect that."

She's also the only woman on her team, and she suspects she might be the youngest as well. All those factors led Kristie to start brainstorming ways she could make her language more assertive.

Her solution was to set up the Mac productivity app Alfred to automatically delete or rewrite non-assertive words and phrases when she types them to make her word choices more assertive. It not only made everything she wrote more direct, but also helped her spot where she could write with more authority and confidence. She calls the final product "assertiveness snippets."

She took inspiration from a Chrome plugin called Just Not Sorry. It underlines words and phrases in Gmail that potentially diminish the message you're writing.

But Kristie didn't want to be limited to Gmail. "I wanted something more comprehensive," she said.

I'm moving up, career-wise, and I want the way I communicate to reflect that.

The Mac app Kristie uses, Alfred, has a number of features for working more efficiently, one of them being that it can automatically insert predefined text when you make a few keystrokes, a.k.a., text expansion. Typically, people use text expanders to auto-type long strings of text that they commonly use, such as company boilerplate. Or, you can set it up so that if you type "my contact info," it replaces that text with your name, email address, and phone number. It's fully customizable.

In Kristie's case, she uses Alfred's text expander function to automatically change or delete certain words and phrases that she finds undermine her assertiveness. A few examples are:

After creating these snippets, Kristie learned that language isn't cut and dry, and it took some trial and error to get her snippets to work the way she wanted them to. For example, "sort of" could make Kristie sound unassertive in some contexts, but in others, it's a necessary phrase that doesn't diminish her authority at all. Similarly, she originally had the phrase "I think" in her snippets, because she wanted to avoid writing, "I think I know the answer" and instead use more assertive phrases such as "I expect" or "I suspect." But sometimes, she really is thinking about a matter and needs to communicate that action.

She's revised her snippets to now flag some of the phrases rather than automatically replacing or deleting them. So, when she types "I think," Alfred now adds a question mark next to it. It flags the language as potentially unassertive, which still brings it to Kristie's attention, and that's the result she wanted.

Kristie came up with her assertiveness project for herself, but she ultimately chose to share them with a women's Slack channel at Zapier. That's where I learned about it.

"My original thought was this could be useful for anyone, but it especially rings true that women tend to use undermining language and struggle more with assertiveness," she said. "The women's channel at Zapier is an awesome place for discussing these kinds of issues and helping each other out. I thought, hey, if at least one person finds this interesting, then I bet people in this channel would love it." (I should note, too, that the women's channel doesn't exclude men.)

Below are instructions for using Alfred to make your writing more assertive. You can use the snippets Kristie created, create your own, or riff on the idea to suit your needs.

How to Install and Use Assertiveness Snippets

To use this particular setup, you must first install the Mac productivity app Alfred 3 (free) and have the Power Pack upgrade (£19 for a single license, which is roughly US$26). Alfred serves a variety of functions, from giving you the power to customize hotkeys to offering text expansion, which is what Kirstie uses to write more assertively. As mentioned, you can replicate a similar setup using any text expander of your choice; for example, if you use Windows, PhraseExpress is a decent option.

Once you have Alfred installed and the Power Pack license activated, download the snippet set. Alternatively, you can create your own. 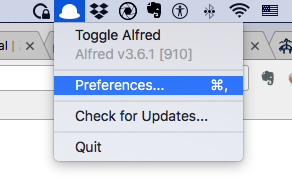 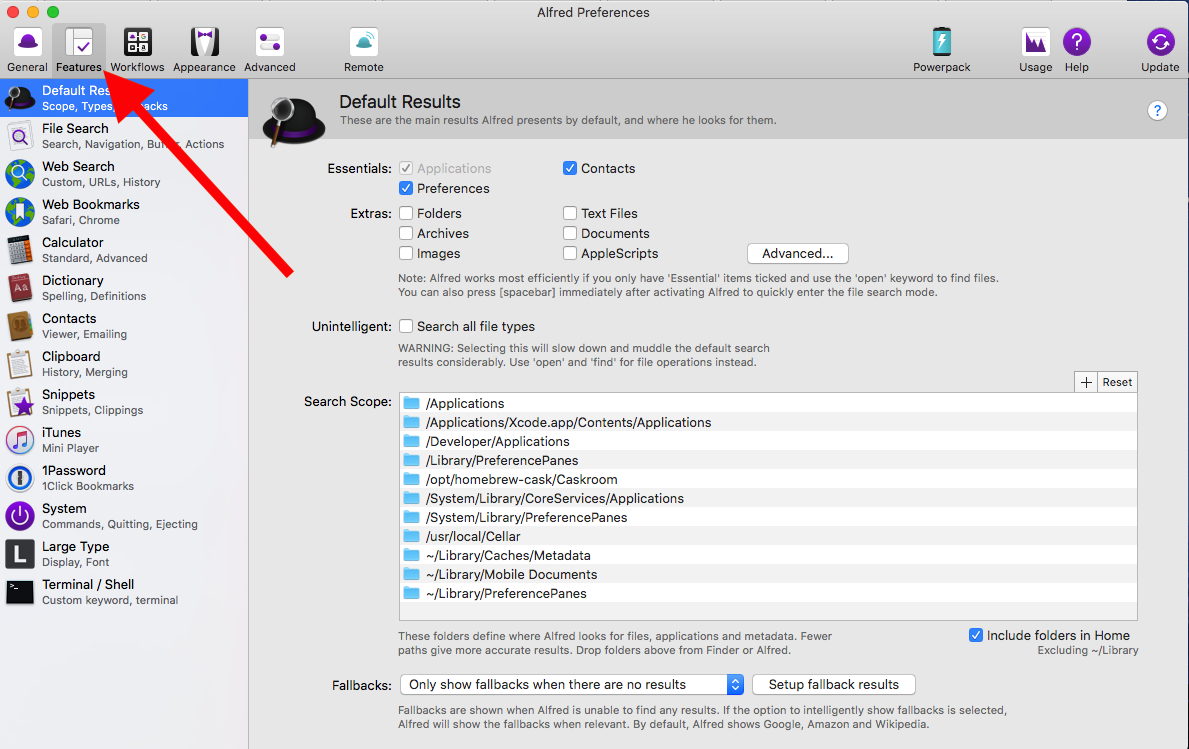 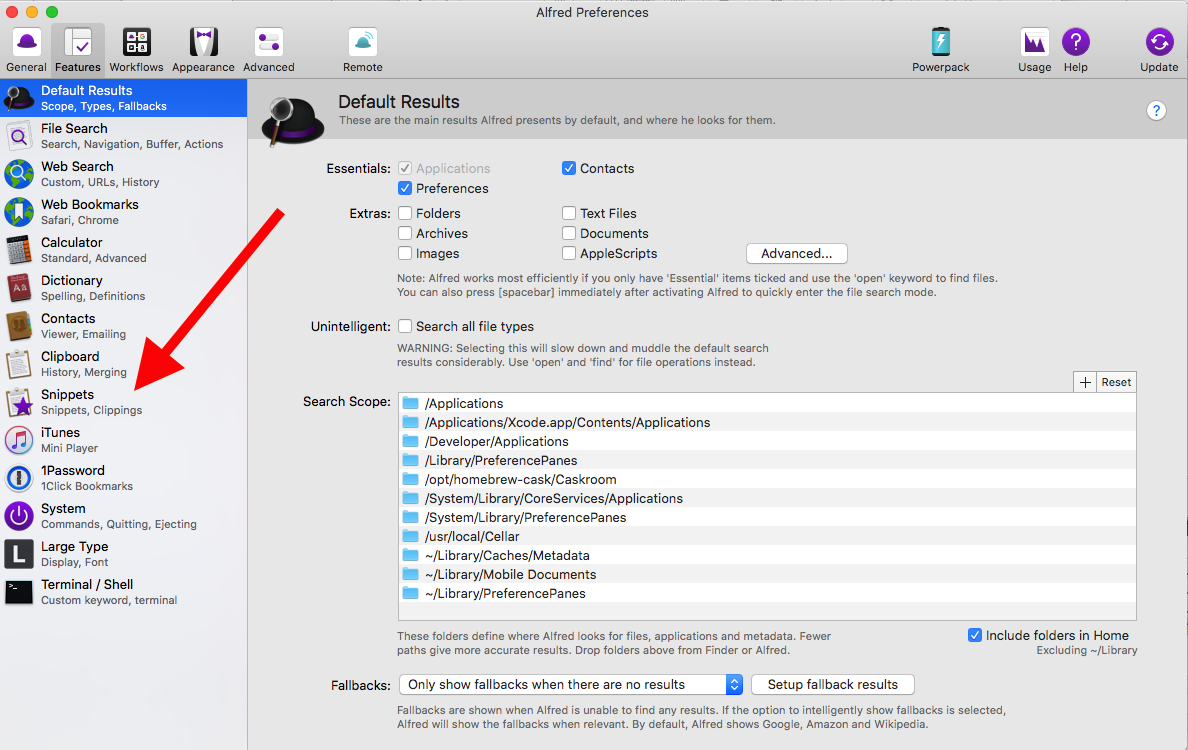 Step 3. Along the left side, choose Snippets. 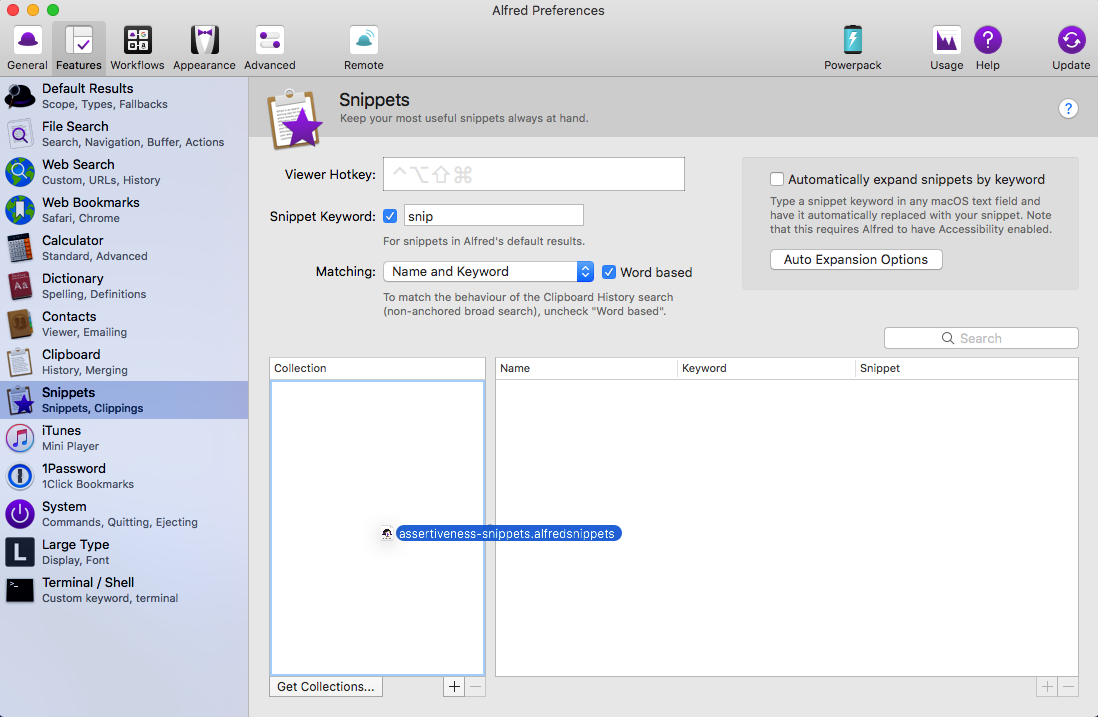 Step 4. Drag the assertiveness-snippets file into the field for Collections. Alternatively, to make your own snippet collection, press the plus sign at the bottom of the Collections area. 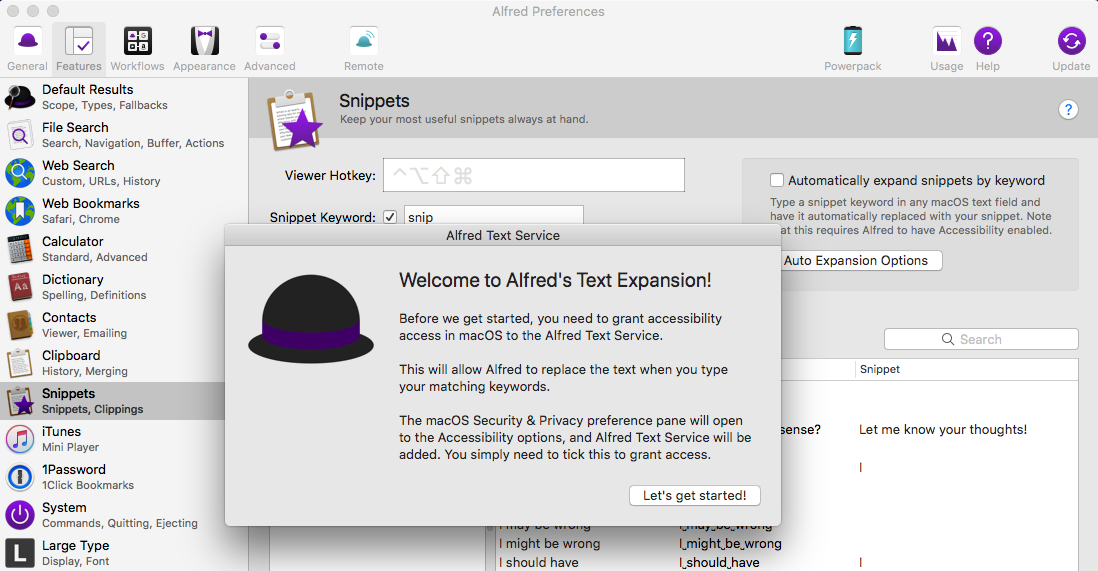 Step 5. Check the box Automatically expand snippets by keyword. Alfred pops up a dialog box that helps you enable this feature at the OS level. 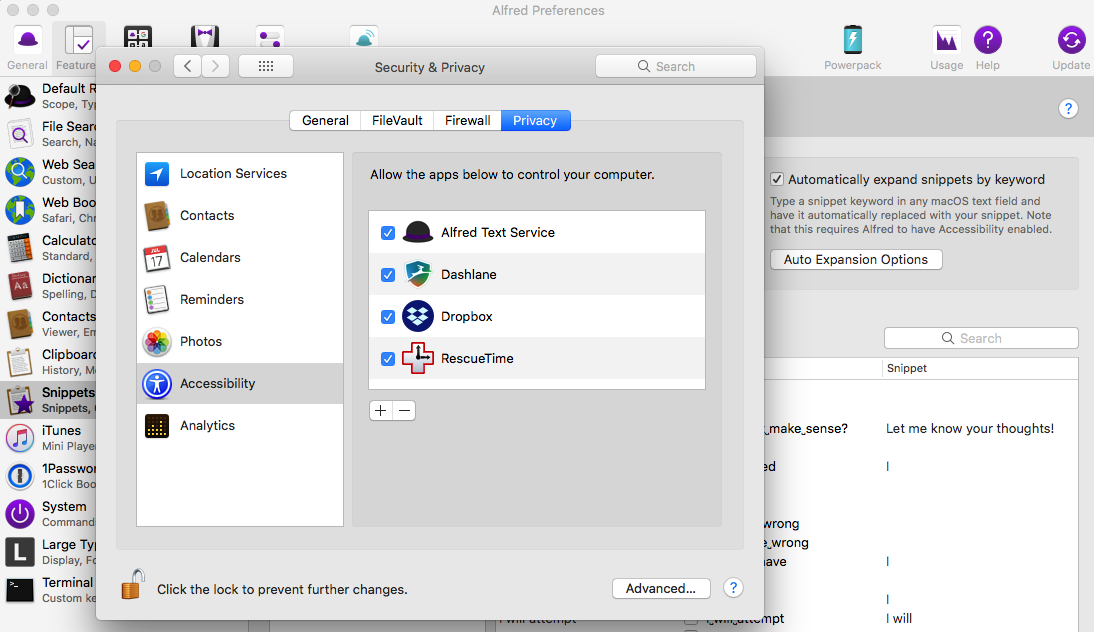 Step 6. Follow the prompts, which will bring you to your Mac's System Preferences, Security and Privacy section. Here, click on the lock icon in the lower left corner. Enter the password for your computer, and now add a checkmark next to Alfred Text Services. 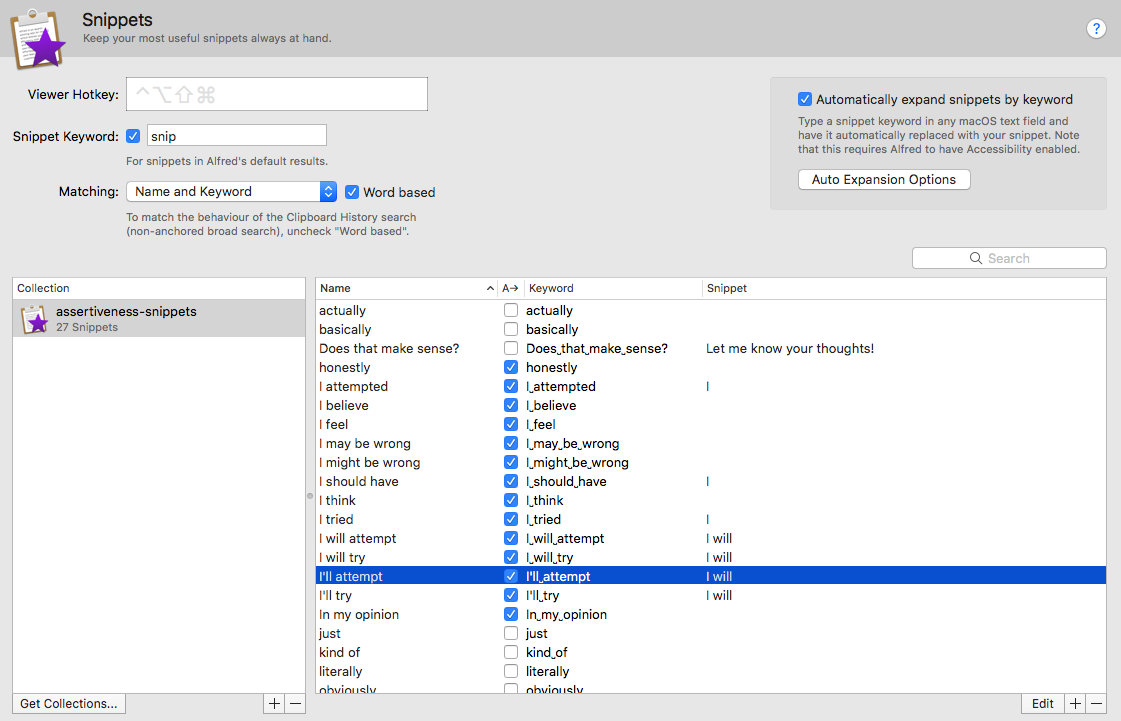 Step 7. Back in the Collection panel, enable the phrases you want to catch yourself writing by adding a checkmark next to each box.

Anyone can improve their writing by using text expanders, auto-correct, or macros to become more conscious of language use. If nothing else, using a text expander in this way makes you more aware of how often you use hedging language, which in itself can help improve your writing and assertiveness.