Early in 2021, Google launched Tables, an experimental app from the company's in-house incubator.

You can be forgiven for thinking that Tables is an awful lot like Google Sheets. Google, after all, makes many products that compete with their own—their constantly growing collection of chat apps comes to mind. But this isn't a situation like that. Google Tables and Google Sheets really are entirely different products.

To summarize: Google Sheets is a spreadsheet, while Google Tables is a database with built-in automation tools. Let's talk more about what that means.

Google Tables looks and works a lot like Airtable, so I'd suggest reading about what Airtable is while you're researching Tables.

Spreadsheets, like Google Sheets, are all about storing numbers and doing calculations. Before computers, in the '60s and '70s, these were literally large sheets of paper that bookkeepers and data analysts used to crunch large volumes of numbers. It was terrible, which is part of why computers became a big deal. The spreadsheet was, in many offices, the reason to get a computer.

When you have a hammer, though, everything looks like a nail—and spreadsheet usage spread far beyond number-crunching. Today, people use spreadsheets for anything you can imagine: project management, to-do lists, and making video games, to name a few things. But that doesn't change the fact that spreadsheet apps are designed primarily with number-crunching in mind. They store information in columns and rows, and let you use formulas and a few other tricks to rearrange that information. And that's about it.

To use an extremely broad metaphor: spreadsheets are still a lot like those giant pieces of paper that were their precursor. Databases are more like a stack of cards with information that you can shuffle and arrange in different ways.

I mentioned that a database lets you view data in different ways. Perhaps the easiest way to see what that means is by switching between the various views offered by Tables. There's the grid view, which kind of looks like a spreadsheet. Here's a list of airports, using that view:

That kind of looks like a spreadsheet, right? But it's not—not really. For one thing, on a spreadsheet, you can write whatever you want anywhere. Here, every row offers information about one object—in this case, an airport. This is what allows you to view the information in different contexts.

For example, you can change the view to be a Kanban board, which makes it look a lot like Trello. Here's the same information as above but organized into two categories: "Visited" and "Not yet visited." 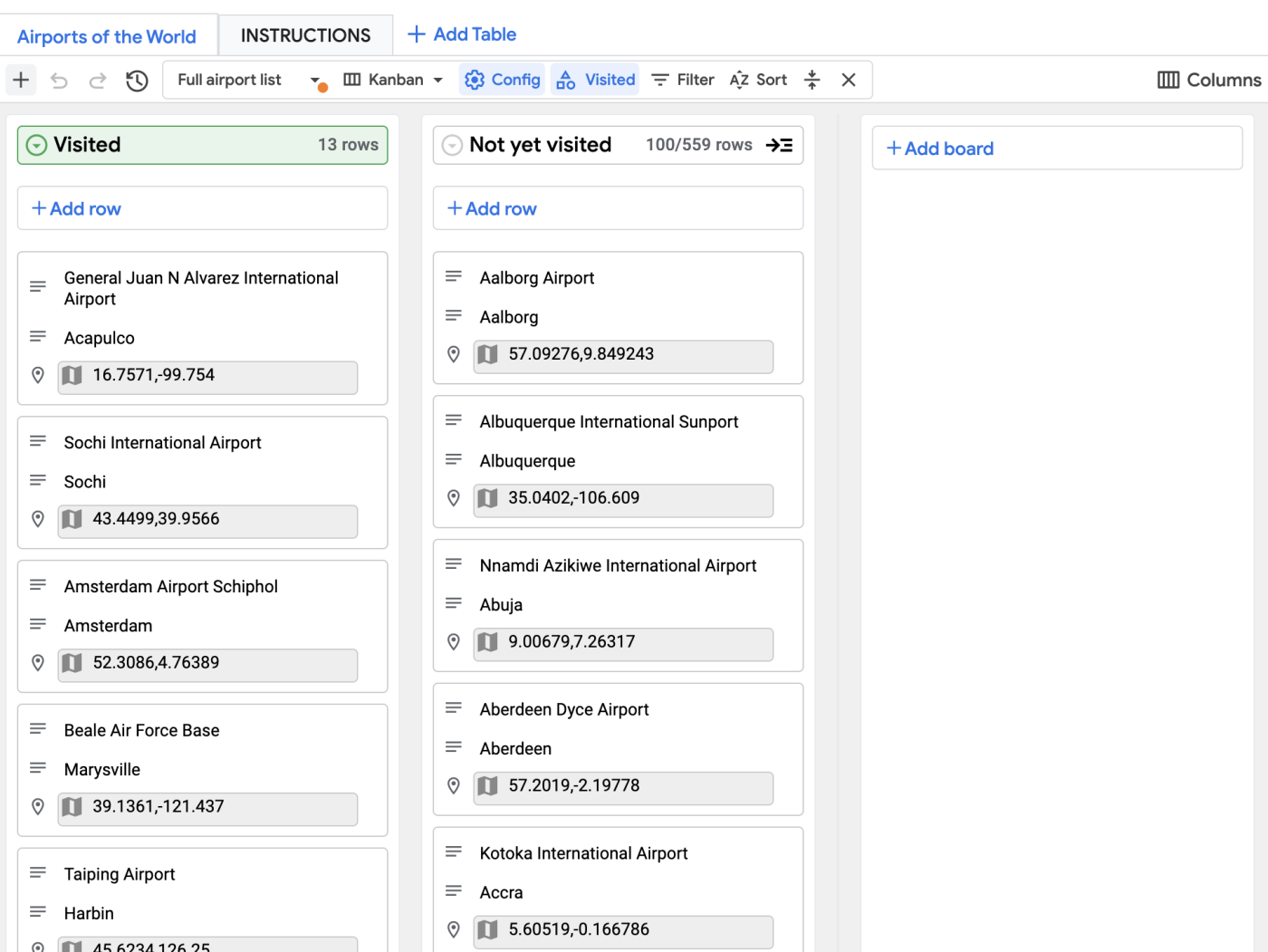 There's more. In Tables, you could view the information using a map, assuming you've included coordinates or addresses. 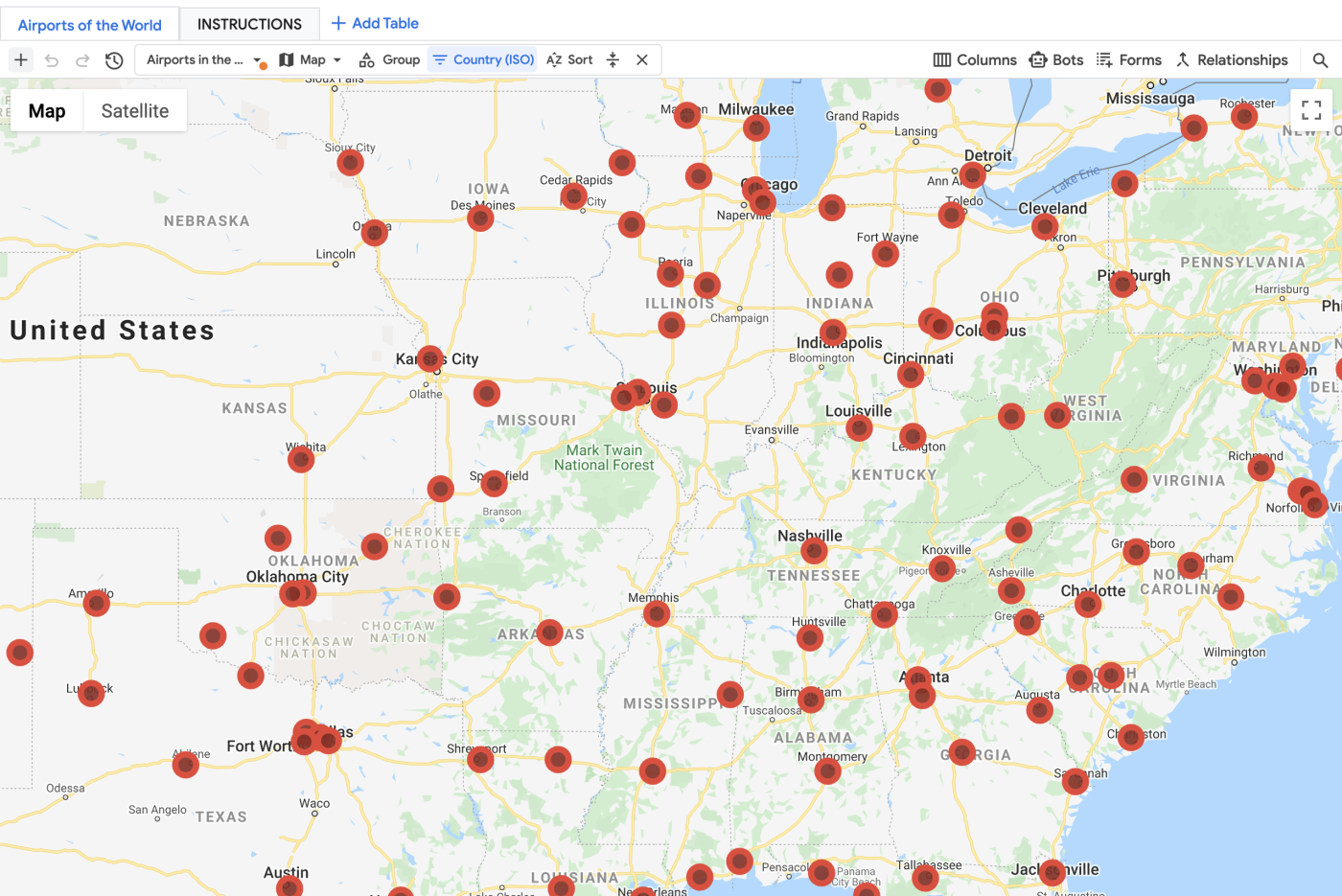 (The map view, by the way, is something competitors don't offer by default. Neat feature.)

This kind of flexibility really sets apps like Tables apart from a spreadsheet app. You can add information and define relationships, which allows you to see that information in different ways.

Google Sheets can sort of do that, if you're willing to put in a lot of work. Google Tables is actually built to do this. That's the difference.

The interface for using automations is very straightforward, with a simple trigger and action model, and it means you can turn your tables into an app that does things. Say you're using a table for task management: you can do things like email people when they're added to a task, or hide an item if someone clicks a checkbox to mark it as complete.

Want to build something a little more complicated? There's support for webhooks, allowing you to connect your automations to Zapier, and Google App scripts, allowing you to code custom automations. But you don't need code to make something powerful here. You can basically build an app without any code, depending on what you're trying to accomplish.

Zapier lets you automatically send information from one app to another, helping you reduce manual tasks. Learn more about how Zapier works.

Some people will tell you that it's better to have loved and lost than to never have loved at all. Long-time Google users may disagree. The company often launches new tools to much fanfare only to retire them if they don't become a category-dominating behemoth.

There's no definitive reason to think Tables will end this way, but there's also no reason not to. Airtable has a huge head start in the category, and Google might decide to abandon Tables if they can't catch up. Plus, as part of Area 120 (the in-house incubator), Tables is a beta tool that might not ever be converted into a fully-fledged Google product.

On the flip side, if Tables does catch on, Google has plenty of resources to run a robust service—and they offer all kinds of apps to integrate with in interesting ways. The Google Maps-powered map view is just one example of what Google could build by integrating other products into Tables.