How to Automate 10 Tedious Tasks and Get More Time Back

Here on the Zapier blog it isn't often that we dedicate a full post to highlighting the automation tool we've built. Today's post does just that, introducing you to Zapier's power, showing you the basics of setting up a "Zap" (aka automation) and supplying you with 10 ideas that will hopefully cut out at least one tedious task from your weekly routine. 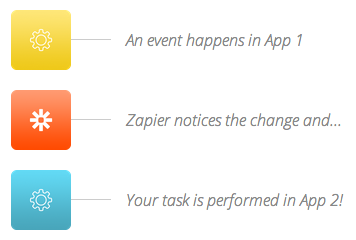 Zapier is event-based automation. An event, let's say a new email with an attachment, triggers an action, such as downloading that attachment to a specified folder. This simple equation—an event happens in one place, triggers an event in another place—is then applied to a massive integration of over 400 apps, including Gmail, Dropbox, Evernote and Twitter. That means when you receive a new email, besides Dropbox, you could trigger off an action in hundreds of other apps, making the automation possibilities of Zapier seemingly infinite.

But before we get to even just a few of those possibilities, let's first look under the hood of Zapier to see how easy it is to set up one of these automations.

How to Set Up Automation

After , you'll soon find a button with the short phrase, "Make a Zap!" Click it to enter into the "Zap editor".

For an example, let's set up that Zap to automatically save all email attachments of new emails that arrive in your inbox. The first step in doing so is to turn that statement into a Zap—set the "trigger" (new Gmail attachments) and the "action" (Dropbox copies file from Gmail).

From there you'll need to connect your Gmail and Dropbox account to Zapier—this allows the tool to receive and send data between the two apps. After specifying the Gmail folder you want this Zap to trigger on (you're able to select Inbox or narrow it down to a specific folder) you'll pick the Dropbox folder where you want these new attachments to be placed. 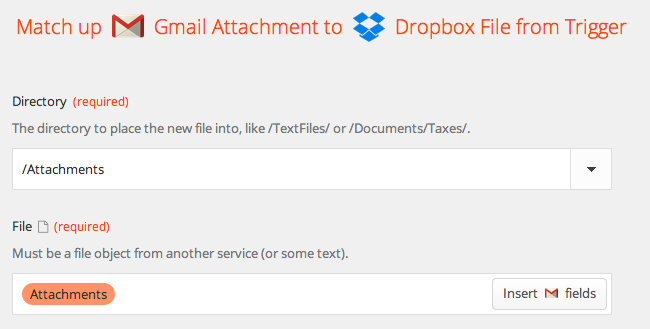 You're almost near the end now. The second to last step asks you to test the Zap to make sure it's working as intended. And the final step: turn the Zap "On". Or in the famous words of infomercial legend Ron Popeil, "Set it, and forget it!"

So what's the best way to use Zapier? Try one of these 10 Zaps to eliminate a tedious task out of your day.

1. Automatically Save Attachments to Dropbox

This Zap can be set up to only save attachments placed in a particular Gmail folder, sent from a designated email address or from emails containing a keyword, such as "report". Attachments can also automatically be sent to Box or Google Drive, too.

2. Get a Text Reminder to Take out the Trash

Whether you need a weekly reminder to set out the trash or a monthly reminder to pay rent, Zapier offers a "Schedule" app that lets you trigger and reoccurring action. That action could also come in the form of a mobile push notification, to-do list addition, calendar event, Evernote reminder and more. The frequency of the action can be set daily, weekly or monthly.

3. Save Needed Receipt Details and Archive the Rest

Use Zapier's free email parser to turn any template emails you receive, such a receipt from Amazon, right into spreadsheet data, bookkeeping entries, CRM contacts and more.

4. Enter Biz Cards Into a CRM with a Mobile Pic

Eliminate the annoying task of manually entering new business cards you collect into your CRM or other contact management system, such as Google Contacts. Instead, simply take a pic of the card with the FullContact Card Reader app and let their human-powered service and Zapier take care of the rest.

Whether you're monitoring a brand, keeping tabs on a developing story or saving tweets containing a certain hashtag, Zapier can automatically archive new Twitter search results straight to a Google Docs spreadsheet. You're able to pull in not only the body of the tweet, but its time and location along with details about the profile it came from—the individual's name, follower and following count, location and more.

Buffer is a super handy tool to schedule and track social media postings, and when hooked up with an RSS, it becomes a convenient way to streamline sharing new blog posts. This method is preferred over directly sharing new posts right to social media sites because with Buffer you're able to look over your queue and make any final edits before your content is later shared.

7. Add Contacts to a Newsletter—Right from Gmail

When an email exchange leads to someone asking you to sign them up for your company's newsletter, just save their email to a specific Google Contacts folder and automatically have it added to a MailChimp list (they'll first be asked to opt-in). If neither of those applications are in your toolkit, then connect one of the many CRMs or form builder apps on Zapier to the email marketing service of your choice.

8. Get Email Updates for Spreadsheet Rows

If you've ever relied on Google Docs' form builder or collaborated on a spreadsheet, it can be tempting to go in and check for new data way too often. Instead, wait for those items to come your way by setting up an email alert when a new row is added to your Google Doc. The alert, which could also be in the form of a text message, mobile push notification, team chat app message and more, can include the contents of the new row, too.

You're already saving photos to Dropbox; don't upload them to Facebook again. Instead, let Zapier do that. You can even add a "capture" as your file name, so Zapier can post the picture and tell your followers about it automatically.

10. Get Notified When a Favorite Blog Publishes a Post

Instead of consistently checking a site or RSS reader, let new posts of your favorite blog arrive right in your inbox.

Zapier users find all sort of ways to cut tedious tasks out of their workflow, but we want to know yours. What tedious task have you eliminated—or wish to eliminate—with the help of automation? Please share in the comments below!