How to Run a Design Studio in 90 Minutes or Less

At our recent team retreat in Colorado, I led Zapier through a quick brainstorming exercise known as a design studio. It's an organized method for harnessing massively parallel feedback from every team member in a way that can actually be absorbed. It’s a very effective technique that I haven't seen discussed online, so I'm here to share one of our secret tools!

I first ran a design studio a few years back at a workshop I organized called Toolbox. I also ran a few design meetups while the company I co-founded participated in Y Combinator's Summer 2012 session. It was a great way to validate potential designs in a fast-paced environment and I thought the timing was right for Zapier to do a session as well.

First though, let me examine the problem with traditional brainstorming techniques.

Brainstorming via whiteboards is usually seen as an indispensable technique for businesses to discuss strategy, hash out ideas, or nail to specific designs. It's even glamorized in movies and TV whenever a geeky hero has a sudden insight—they'll grab a sharpie and start writing to capture their eureka moment. 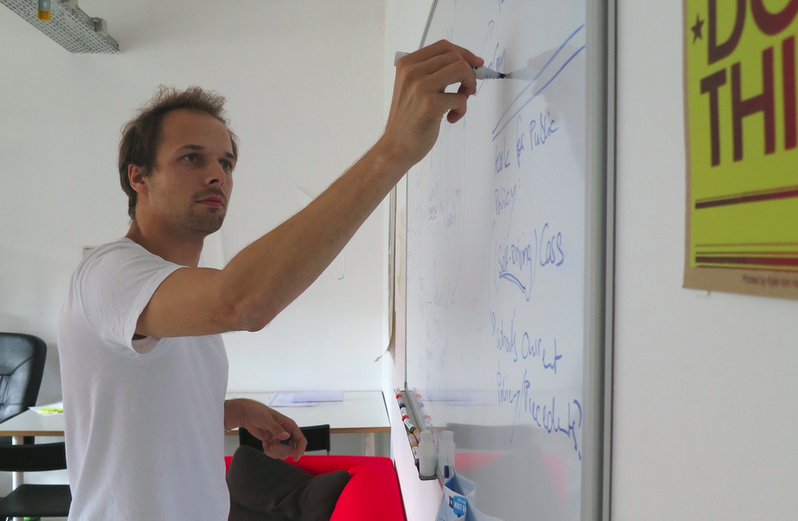 So as a remote team, does Zapier miss out on this valuable tool? Or does whiteboarding only exist amongst the select few of us that are near each other, which generates work that others dutifully execute?

It turns out neither is true. One of the dirty secrets of business (even startups) is that it's 90 percent execution and is less about inspiration or random strategizing. Constant whiteboarding is a sign of a distraction, not of productivity. Our team is comprised of "armies of one" that are responsible for generating ideas for work but most of the time are busy getting things done.

Even worse, whiteboarding has a few flaws that make it less valuable than most people think.

One practical matter is that whiteboarding is not versioned—once you've wiped away some ink, it's gone forever. Even capturing it on your phone isn't that great, since it's never the same fidelity as the original and usually squirreled away on a single person's device.

Another problem is that whiteboarding is often very single threaded. The format is single participant and many listeners, which isn't the most conducive for everyone expressing their opinion.

The worst aspect of brainstorming is a cognitive one: if everyone has a Sharpie and is working together, it still doesn't solve the problem of groupthink, since they're working on a single whiteboard to create consensus around a lowest common denominator.

There's even research studies backing this up—groupthink is the typical team dynamic and the results are inferior to solitary thought by individuals.

So what's the solution? It's a simple exercise that requires notebooks and pens, a stopwatch and a few ground rules.

Any solution to replace whiteboarding would have to improve upon it and have the following goals:

On a Sunday afternoon, I acted as moderator and fired up a short Keynote presentation to explain the overall goals and format of the design session. I listed a handful of topics that had been floating around as potential projects and we voted for the top three that we thought were most immediately relevant to our company goals.

Then, our 10 person company split into three sub-teams to tackle each of the projects. From there, we went into a highly structured session of sketching and brainstorming. Here's how it worked:

We did three rounds of activity. Each round was 10 minutes long, with 5 minutes of sketching designs on the pads and 5 minutes of discussion.

Here's the really important bit: every round has a different format of sketching:

Every person sketched silently by themselves, without talking to anyone, to get out their initial ideas. To help them come up with several concepts and not get locked into a single approach, I had everyone do what's called a six-up by dividing their first paper into six evenly-sized boxes, which they had to try to fill up with as many different concepts as possible.

Then at the end of the 5 minutes, each subteam got 5 minutes total for each member to take a minute to describe the various ideas they had.

The focus of this round is divergence—to come up with as many different approaches as possible. Three team members all drawing six thumbnail sketches each pretty much insured that there would be at least a few surprise curveball ideas.

Everyone went back to 5 minutes of sketching alone without talking again, but this time with new instructions: they were required to steal at least one idea from one of their team members that they had just heard about.

Then the subteams got another 5 minutes for everyone to share their work. The focus of this round was to begin to switch from divergence to convergence - to start picking the best ideas from the crop and evolving them.

In practice, the ideas are firing rapidly and it's hard to get people to shut up at the end of the 5 minutes to move on to the next round. That's a good sign! It means the ideas are flowing.

For the final round of sketching, the sub-teams now had a new task. Instead of sketching individually without talking, they had to do the exact opposite: now they had to sketch a single set of interfaces as a group and talk their way into consensus.

Then the sub-teams all presented to the other sub-teams and got insights into the different projects everyone was working on.

We found that people naturally and organically gravitated towards the sub-teams where they had been thinking about the most. For example our support team had a lot of thoughts to share about our onboarding process, the developers clustered together to talk about the platform for third-party integrations, and our marketing folks tackled app discovery and exploration.

So it ended up that there was at least one person on each sub-team that will go on to work on implementing ideas on the related project. 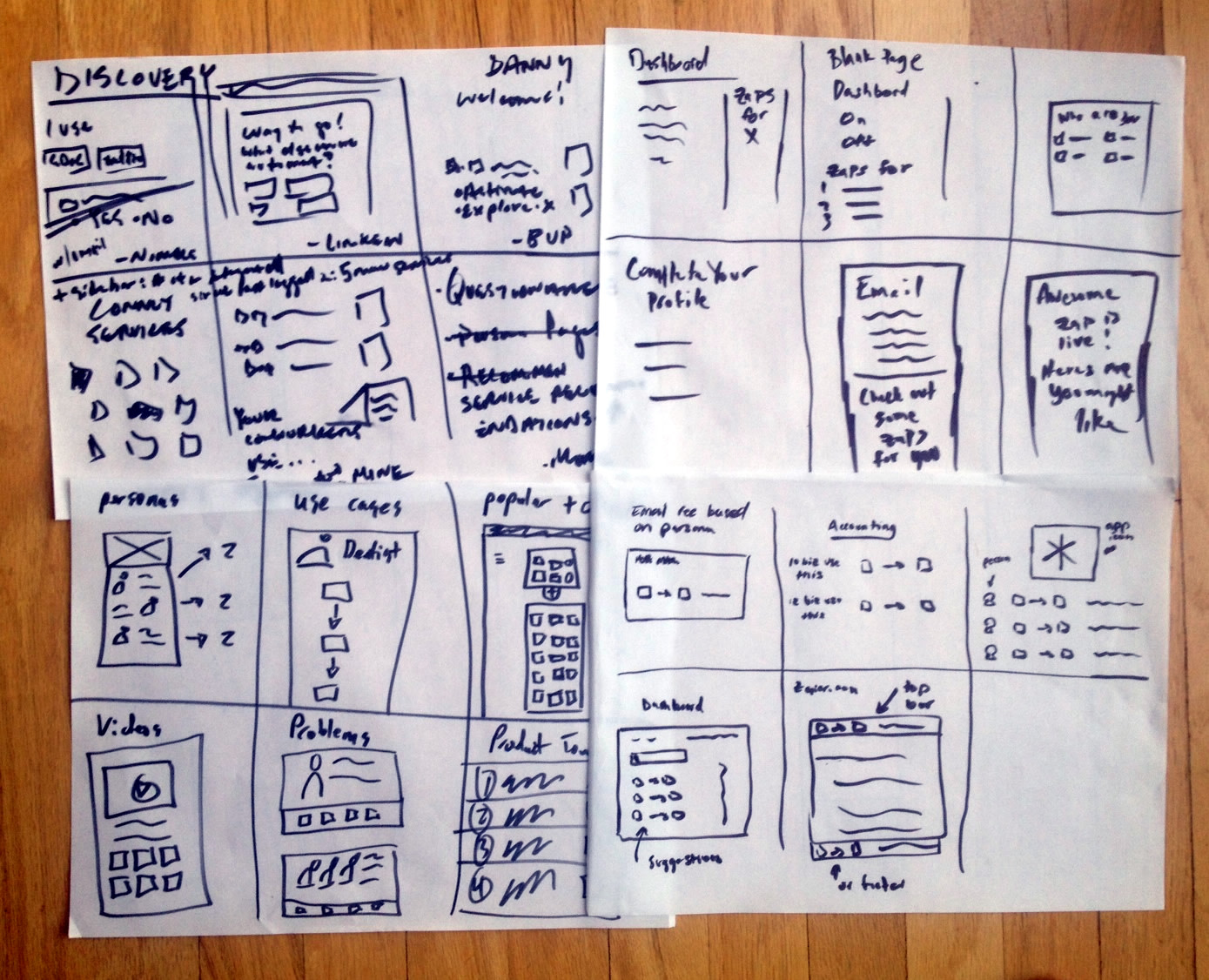 Our team members seem to really like it, too. "It was a fast and effective way to braindump a ton of information pretty quickly and also reach a broad consensus at the same time," said our CEO, Wade Foster.

So that's how you run a design studio! Feel free to ask any questions in the comments if you want to run one with your team.

is a Product Designer at Zapier and owner of two adorable chihuahuas.