Access to funding, healthcare, and relevant tools are all factors

Roughly three in five Americans (61 percent) have had an idea for starting a business, and around a third (34 percent) have had more than one. But an overwhelming majority of those people—92 percent—didn't follow through with turning their idea into reality.

That's according to a Zapier-commissioned Harris Poll survey of over 2,000 Americans, among whom 1,228 have had an idea for starting a business. The survey also investigated why would-be entrepreneurs aren't following through on their visions. Among the most common reasons were not enough funding, no access to benefits such as healthcare, and a lack of access to and knowledge about the kinds of tools that make running a business possible.

A majority of respondents hadn't heard of no-code software, for example. This suggests that, while the tools for building things have never been more widely available, knowledge isn't spreading quickly enough to spur mass entrepreneurship.

What's holding Americans back from starting a business? 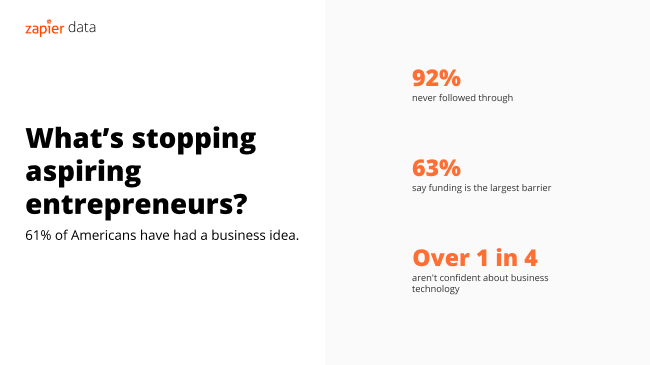 The barriers for would-be entrepreneurs 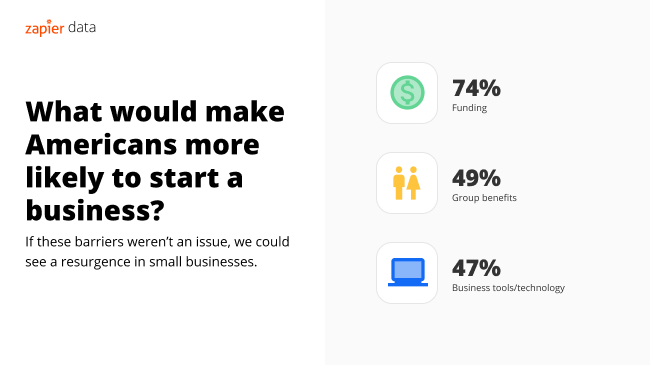 2021 could be the year small businesses pop up all over America—if the conditions are right. We asked would-be entrepreneurs what would need to change in order for that to happen, and the answers were clear.

Nearly three-quarters of Americans who had an idea for a business but didn't start one (74%) say they would be more likely to start a business this year if they had access to funding.

It's no surprise that money is the biggest barrier to entry. But it's not the only one. Here are other changes that would prompt would-be entrepreneurs to start something in 2021:

While communities, institutions, and governments are all involved in these kinds of decisions, we think businesses—and tech companies in particular—also have a role to play. 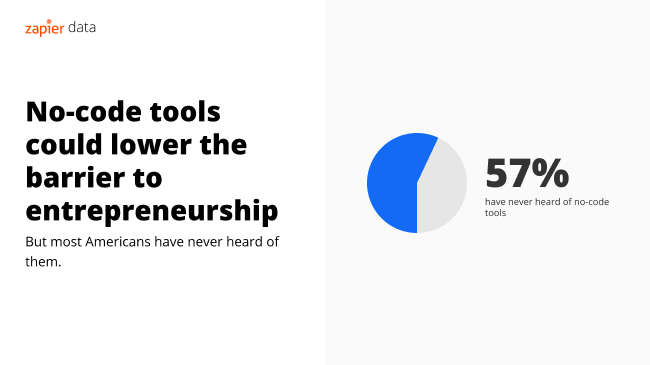 At Zapier, our mission is to democratize automation. That means providing wide access to the efficiency previously only available to programmers and those who could afford to hire them. This is all part of the no-code movement, which could change the way small businesses get things done. No code could help lift the barrier cited by nearly half of America's would-be entrepreneurs: access to and knowledge about business tools.

But, according to our survey, more than half of Americans (57 percent) have never heard of low code/no-code software, and about one in five (19 percent) say they've only heard of the name. Only one-quarter of Americans (25 percent) are at least somewhat familiar, while just 3 percent say they're extremely familiar and have used such software.

That's a massive opportunity for this country. We believe teaching more would-be entrepreneurs how to automate without code could help spur a small business revolution in 2021.

This survey was conducted online within the United States by The Harris Poll on behalf of Zapier between December 21-23, 2020 among 2,001 U.S. adults ages 18 and older, among whom 1,228 have had an idea for starting a business.