The U.S. has seen more than 15 million workers leave their jobs since April, in what's known as The Great Resignation. As employees are asked to come back into the office, they're quitting en masse—but the desire to stay remote isn't the only reason they're leaving.

Employees are overworked, stressed, and experiencing burnout more than ever before. The desire to shift where we work is just the beginning—employees also want to change how they work.

Which could be one reason why employees who have embraced new ways of working may be less likely to leave their jobs. We surveyed knowledge workers across the U.S., and found that only 14 percent of respondents who use automation at work have considered leaving their jobs, compared to a whopping 42 percent of those who don't use automation.

Employees know there are better ways to work 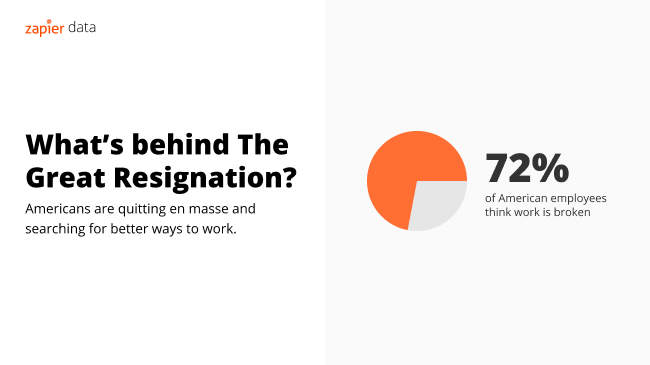 Although the vast majority of employees consider themselves engaged at work, they still believe they could be working more efficiently. In fact, 72 percent of survey respondents think the way work is currently structured—like 9-to-5 work hours—is broken.

To unbreak things, employees want to find jobs where they can focus on work they enjoy and have a better work-life balance. 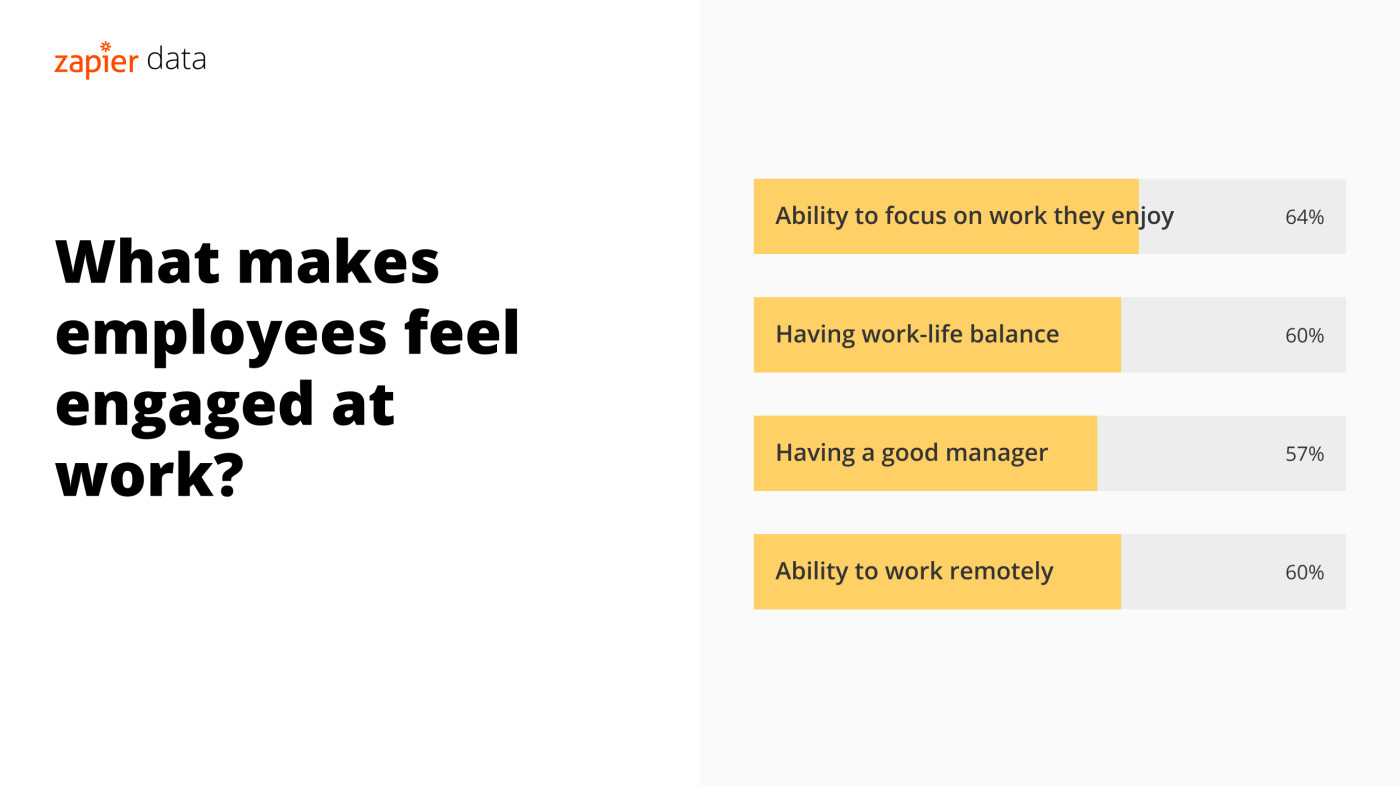 Employees want to focus on the work that matters

Since the start of the pandemic, almost three-quarters of workers say that they've experienced burnout. It's no wonder: 72 percent of respondents said that, on average, they worked more than 40 hours a week over the past 18 months, while 75 percent say they have the responsibility of more than one employee.

It's no surprise 79 percent believe they could be working more efficiently. 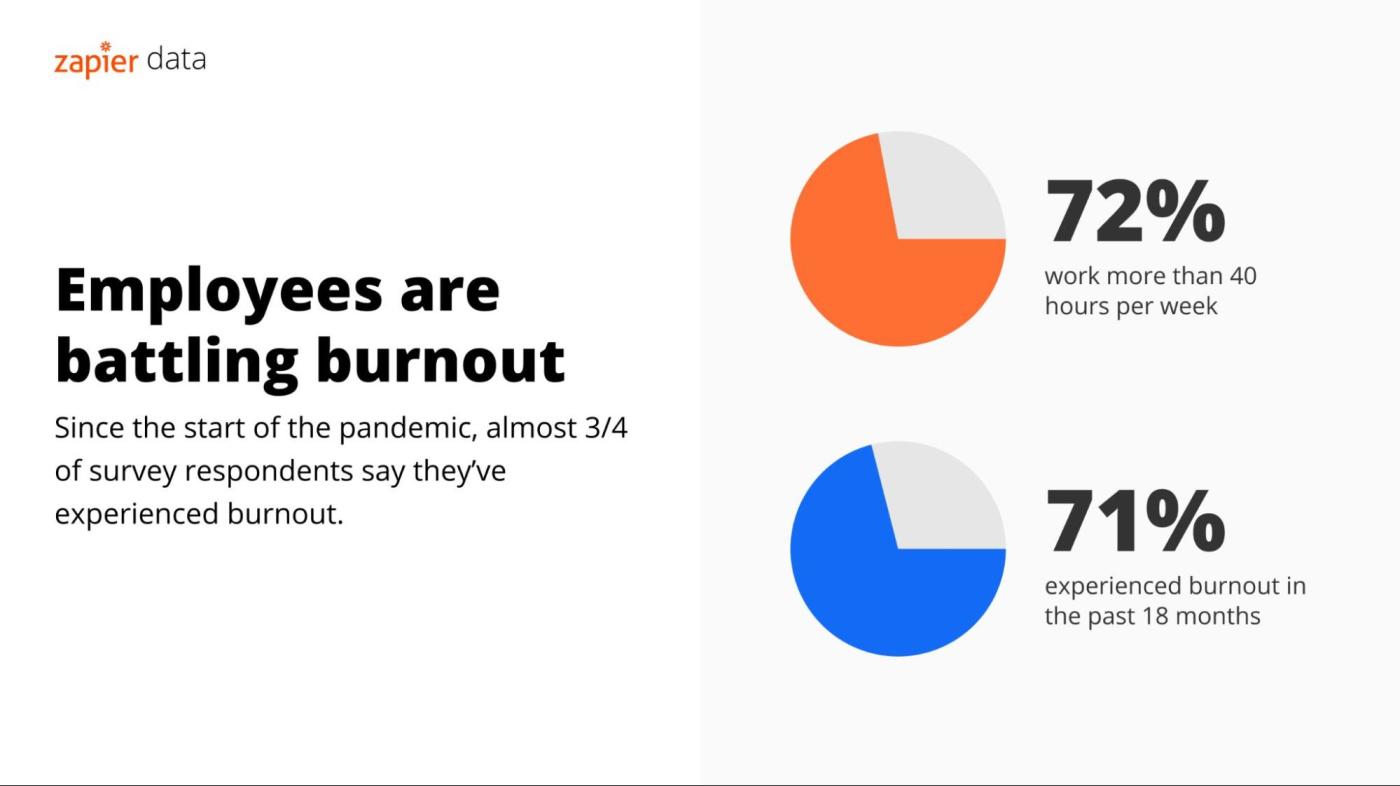 Finding ways to manage burnout and support employees is key to retention: 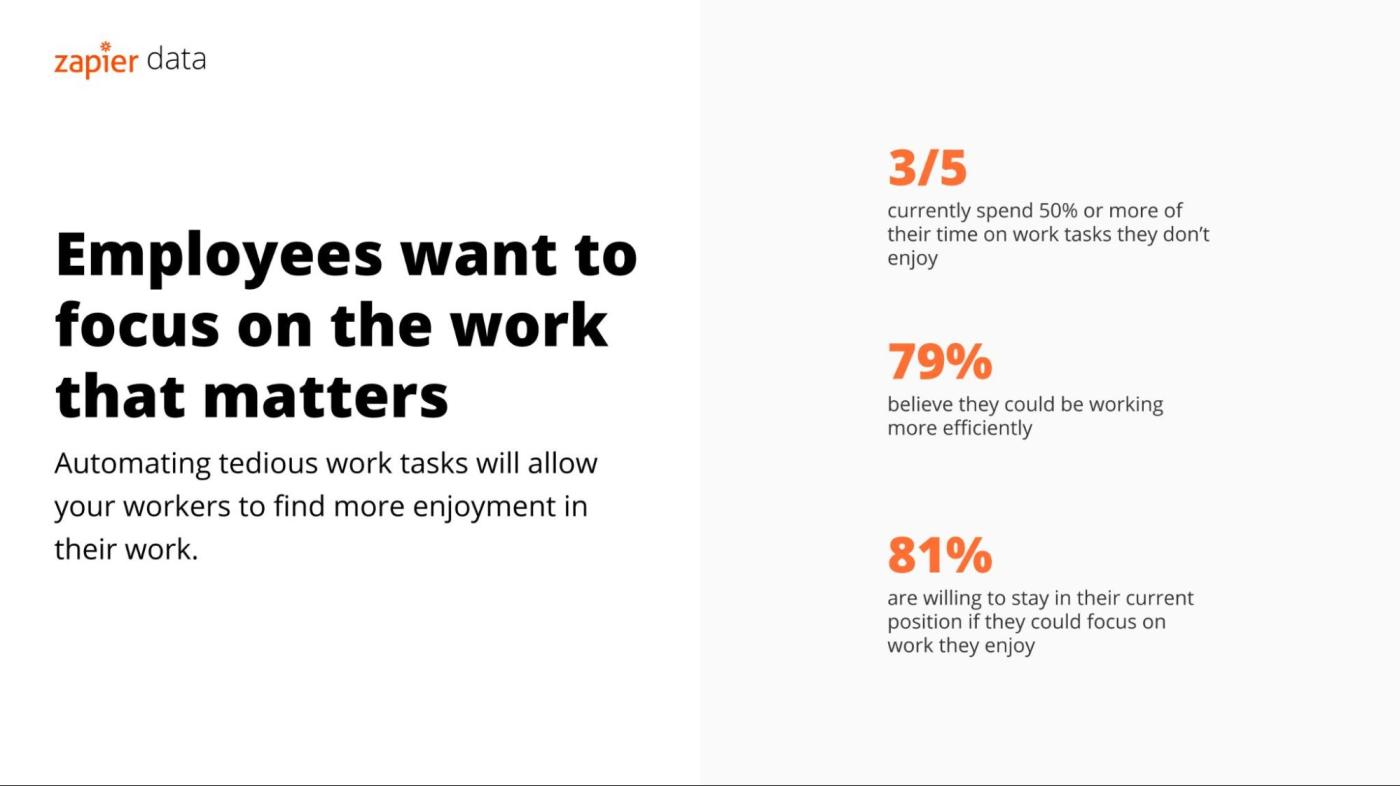 Another key to retention: allow employees to automate some of their work.

While 74 percent of workers say they'd prefer to stay in their current position than pursue a new opportunity, that number increases to 90 percent for those who started using automation in the last 18 months.

Engagement is seen as a key indicator of retention, and 60 percent of employees say having work-life balance is critical to feeling engaged at work. Those that use automation often do so to increase their flexibility at work—which is potentially one reason they're less likely to want to leave their current job.

Automation has other benefits for employees too. Those who use automation software say they do so because: 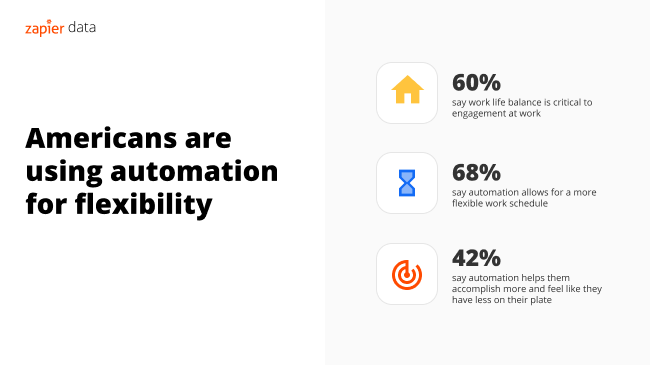 Read more about how much time automation saves different roles and business sectors in this Zapier report.

By automating tedious tasks and streamlining work processes, employees have time to work on the things they want to work on—and 59 percent of survey participants said they feel happier when they can focus on work they enjoy.

Methodology: Zapier surveyed over 600 knowledge workers throughout the United States who work for small and medium businesses (fewer than 250 total employees). This survey was completed online using OnePoll in August 2021 and responses were random, voluntary, and completely anonymous.