A first-of-its-kind examination of the dramatic rise in the use of no-code tools and its effect on U.S. businesses.

No-code tools allow anyone to build apps and automate workflows using a visual interface—no coding or technical skills required. These tools experienced a dramatic rise in adoption over the past few years due to the acceleration of digital transformation from the pandemic, and that growth continues to gain momentum.

Who are the current adopters of no-code tools? Which business departments are being most impacted? What are the biggest challenges and blockers of no-code adoption? And how has this impacted overall business growth in the U.S.?

This study seeks answers to many of these questions, evaluates total industry impact, and makes business predictions for the short, medium, and long term. 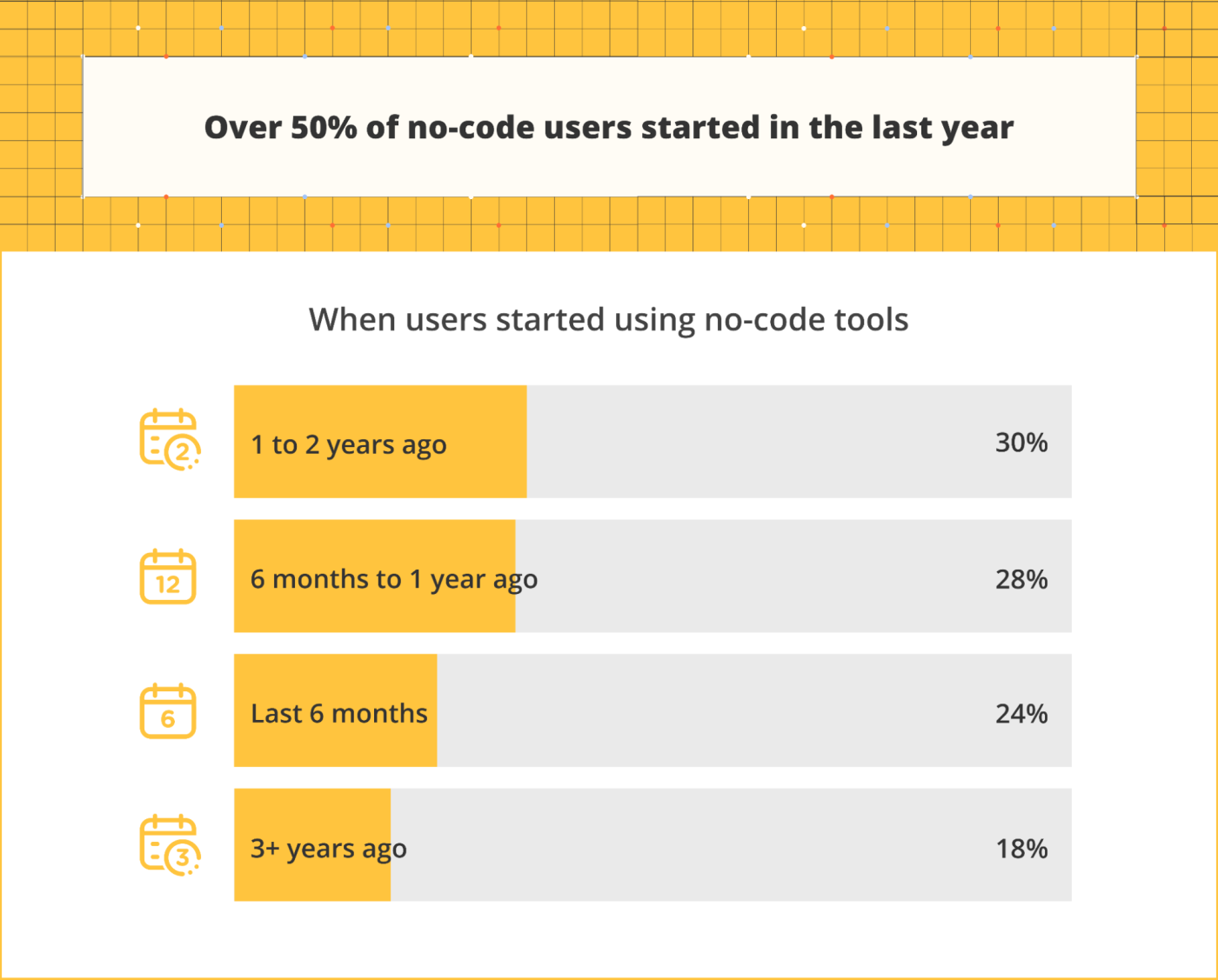 According to Gartner, not only are new users continuing to flock to no-code tools, but existing users are increasing their usage: currently, nearly 60% of all custom apps are built outside the IT department. And by 2025, 70% of new applications developed by organizations will use no-code or low-code tools, up from less than 25% in 2020.

With so many new users trying no-code tools for the first time, how are these new users learning to use these tools? Our results show that not only are the bulk of no-code users self-taught, but many are taking the initiative to watch free videos (26%), paying for an online course (23%), or simply teaching themselves through trial and error (18%). For those who benefit from additional learning resources, leveraging work resources is the most common method, with 31% receiving formal training at work and 6% informally asking someone else at work to teach them. 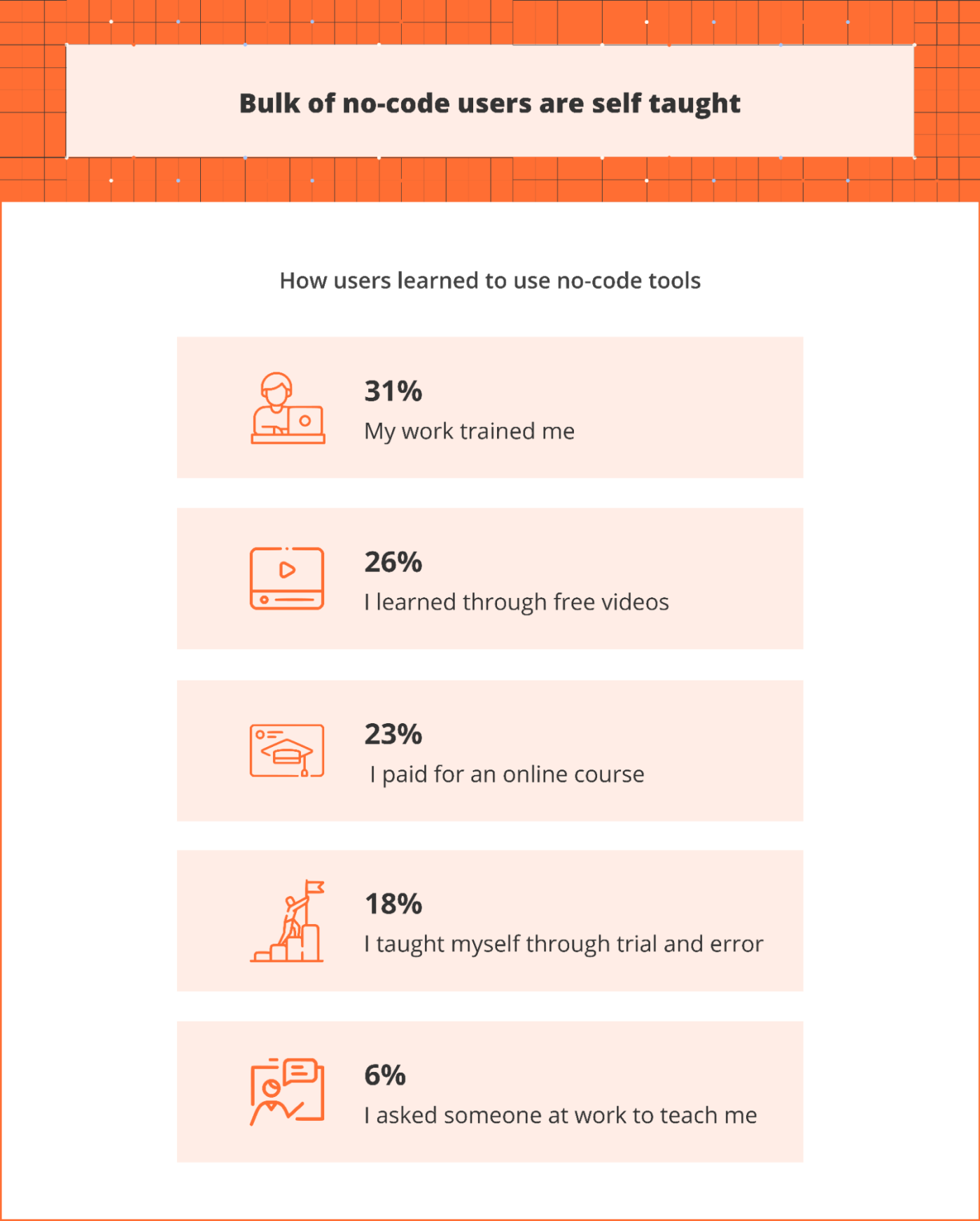 Factors behind the boom

To understand how the current set of business, industry, and societal circumstances fueled the adoption of no-code tools, we asked users why they started using no-code tools and the underlying factors that drove their interest. 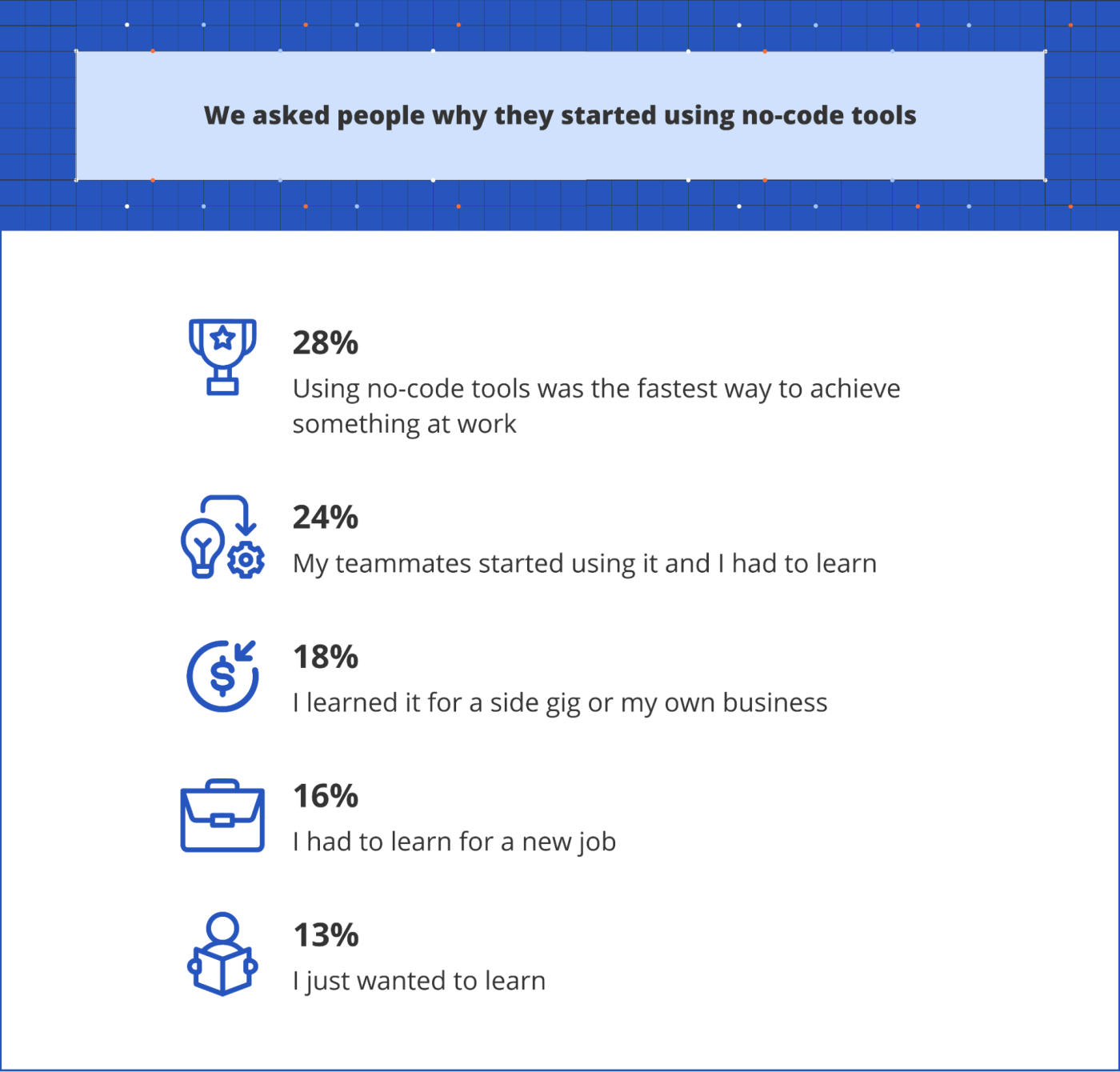 The results support the conclusion that the time-savings benefits of no-code tools are primary drivers of usage. But those time savings were identified by a wide range of people: individuals for their professional work, individuals for their side projects and businesses, and company managers and leaders.

And as these users become more savvy with no-code tools, they have a better understanding of the types of potential benefits. We wanted to know which of these benefits was most important to the continued use of these tools. 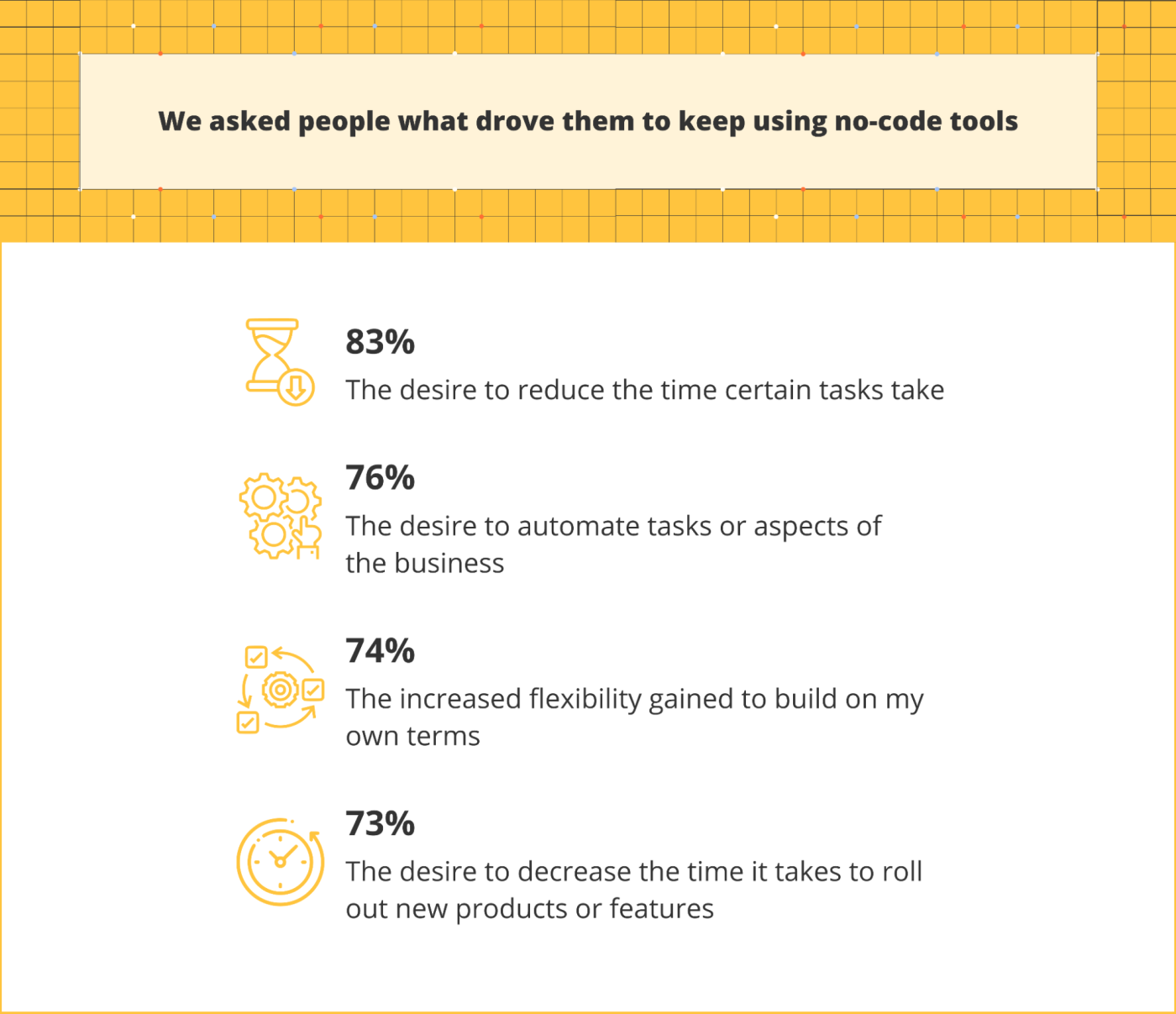 While task-oriented time savings (83%), automation (76%), and flexibility (74%) rank as the top three reasons for continuing to invest in no-code tools, many users were finding multiple benefits from their usage—solving multiple business problems simultaneously. Once an individual uses no-code tools for one aspect of their personal or professional life, they are increasingly likely to use the tool again for another task in a different setting.

Who is using no-code tools?

Despite the benefits of no-code tools to those without a technical background, nearly 9 in 10 users have some type of prior technical knowledge. This supports the conclusion that despite the rise in no-code tool usage, the industry still has widespread growth ahead of it, as millions of non-technical users—those who likely could benefit most from no-code tools—discover its potential power. 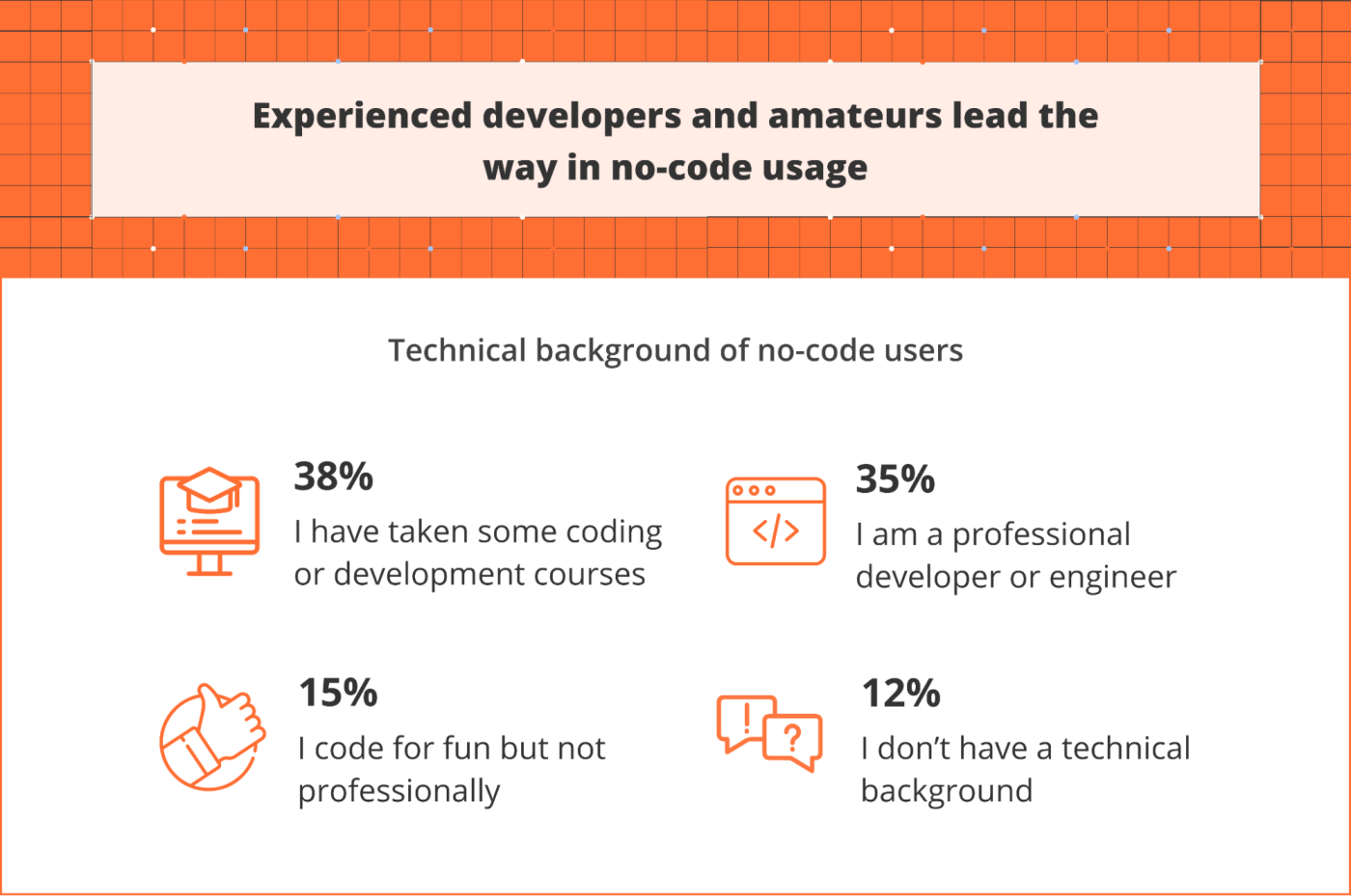 Even though many professional developers or engineers could code their own technical solutions, more than 1 out of 3 no-code users are currently technical professionals who choose to use the tools anyway. Why? Because of the time savings, the ability to rapidly prototype solutions, the ability to empower other non-technical users to make changes after deployment, and also to free up mental focus for other more complex development or programming tasks.

This result supports the conclusion that those already knowledgeable about the technical demands of coding are still the ones most likely to recognize the potential benefits of no-code tools.

But despite the landscape of current adopters, our results also show that technical and non-technical users alike are benefiting professionally from no-code tool usage. While there are certainly "soft benefits," like the ability to be more productive at work, there are also more tangible "hard benefits," like positive company recognition (82%), additional compensation (70%), and the possibility of a promotion (60%) to go along with it. The ability to skillfully implement the use of no-code tools may be increasingly viewed as a difference-making ability and prized skillset. 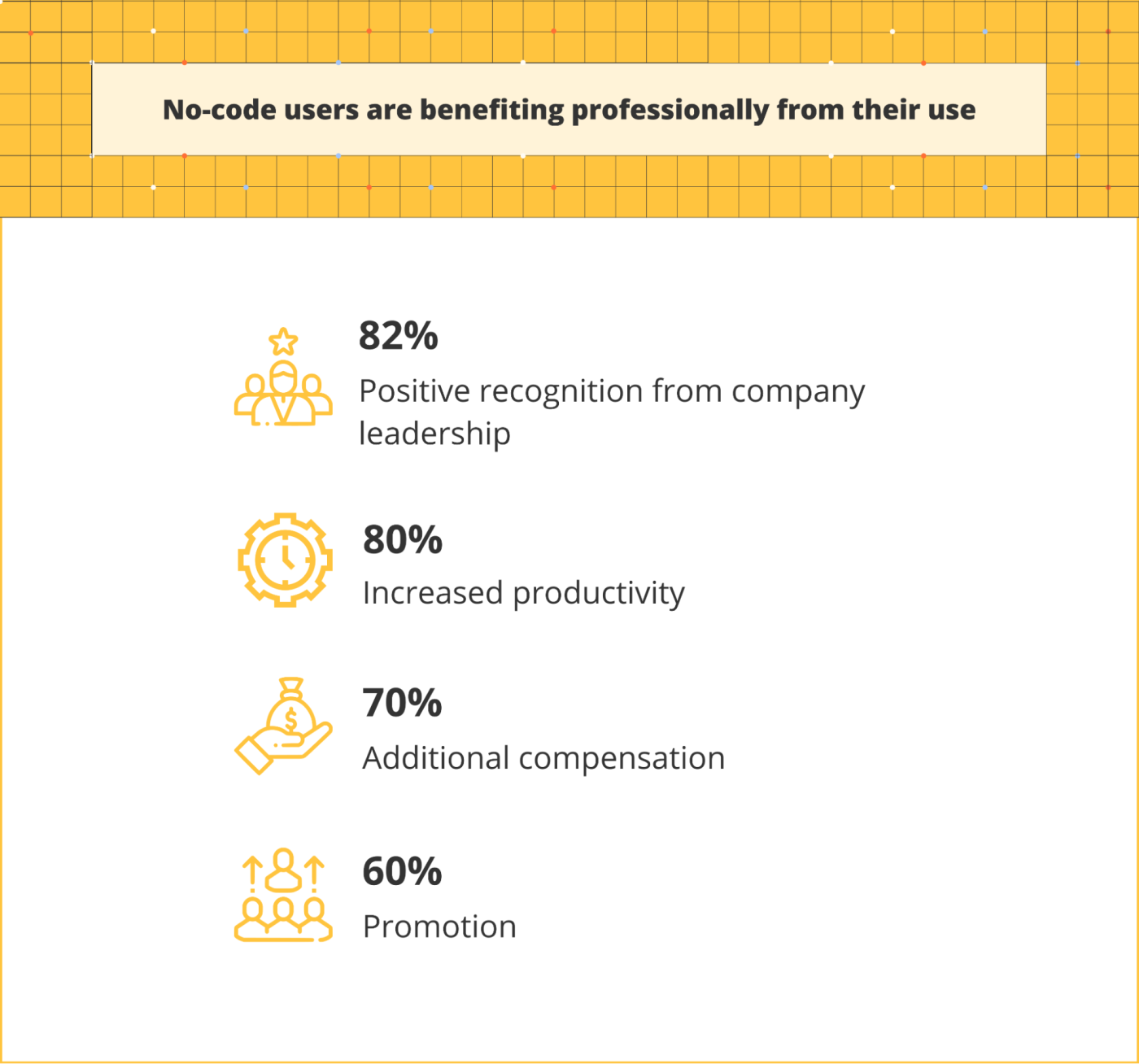 No-code usage and the challenges faced

We asked survey respondents about their frequency of no-code tool usage to understand how core these tools were to their workflows. 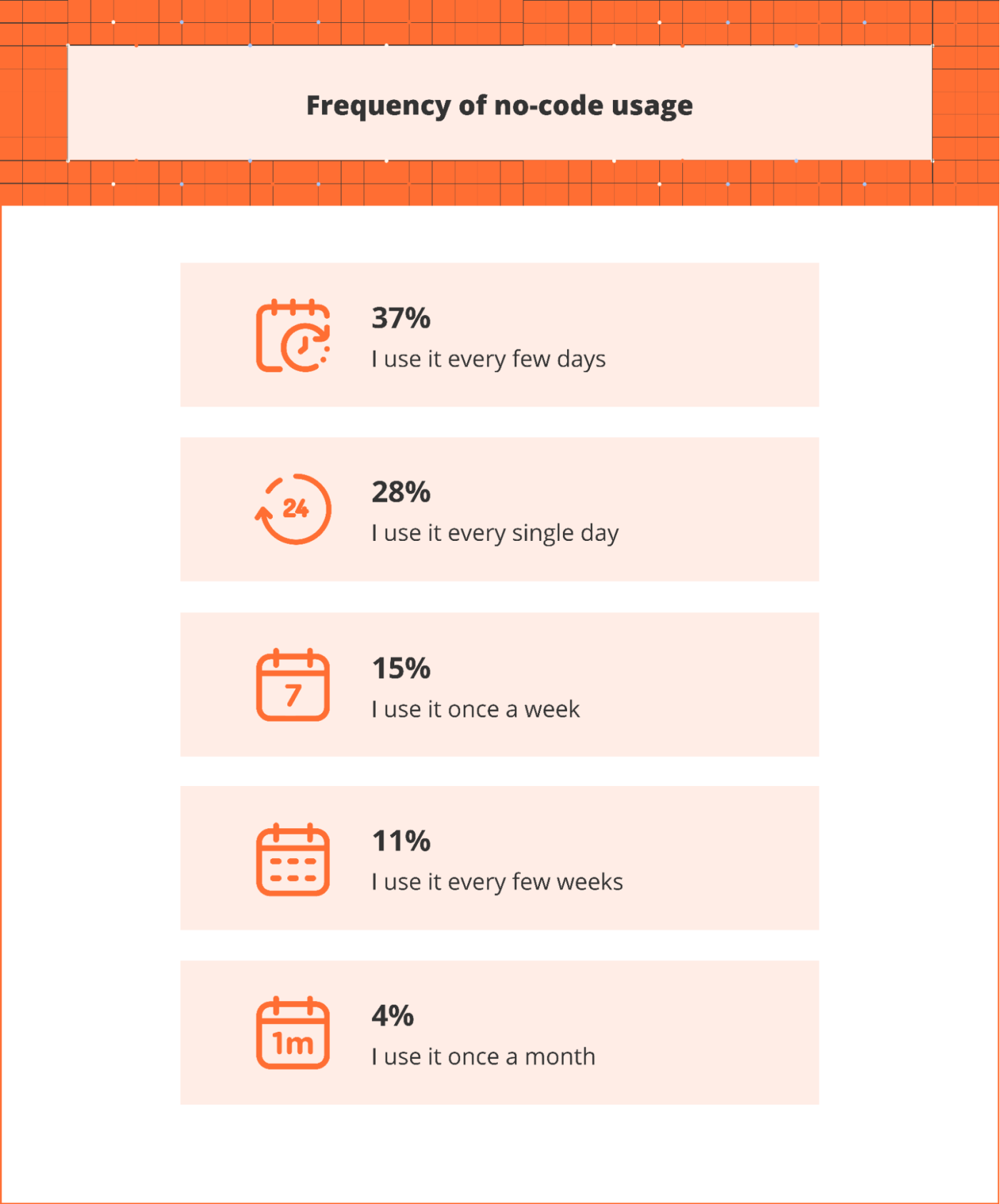 Notably, more than 8 out of 10 no-code users use no-code tools at least once per week, with nearly two-thirds using them multiple times per week. With weekly usage considered the gold standard for many software as a service (SaaS) providers, the extremely high usage rate with minimal fall-off over time suggests the high value being delivered by such tools.

For the 1 out of 4 no-code users who are using such tools daily, that frequent level of usage suggests that no-code tools have become indispensable to the operation of their businesses and job functions.

To understand what stands in the way of even greater usage, we asked respondents to comment on the issues or blockers they most commonly experience when using these tools.

More than one-third of respondents identified issues related to troubleshooting—including not knowing what to do when something goes wrong (36%) and unexpected errors that impact others (34%)—as the two most common challenges. 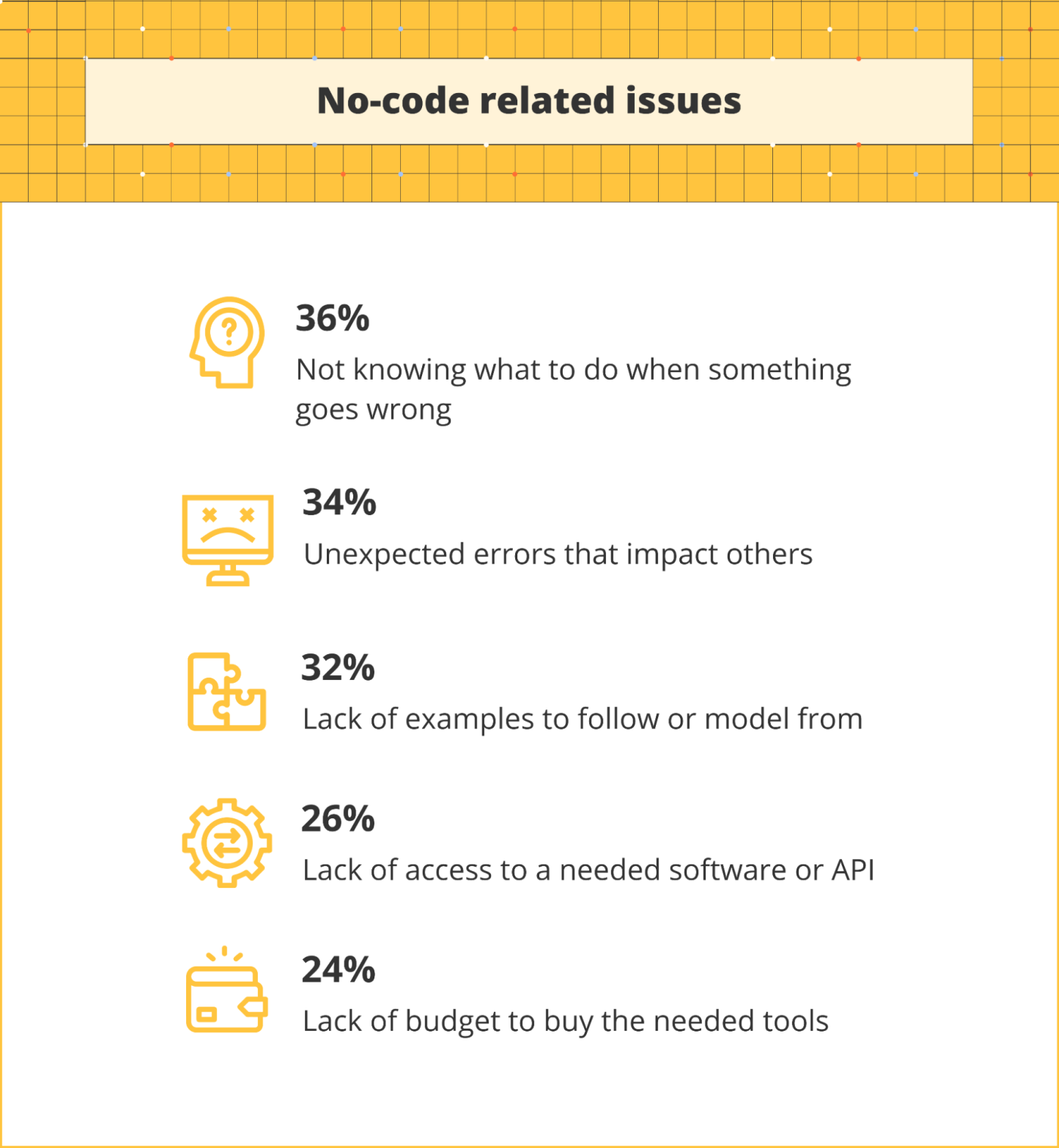 Following up in a close third position, respondents identified a lack of examples to follow or model after (32%). Increasing access to instructional and troubleshooting content, including official resources and help from other no-code users, should be a significant industry goal.

Importance of no-code to companies

Given the apparent importance of no-code tools to a growing set of businesses, we wanted to know which divisions or departments within a company had been most impacted. Are no-code tools having a bigger impact on the back-office operations of a company or the front-line departments like sales? 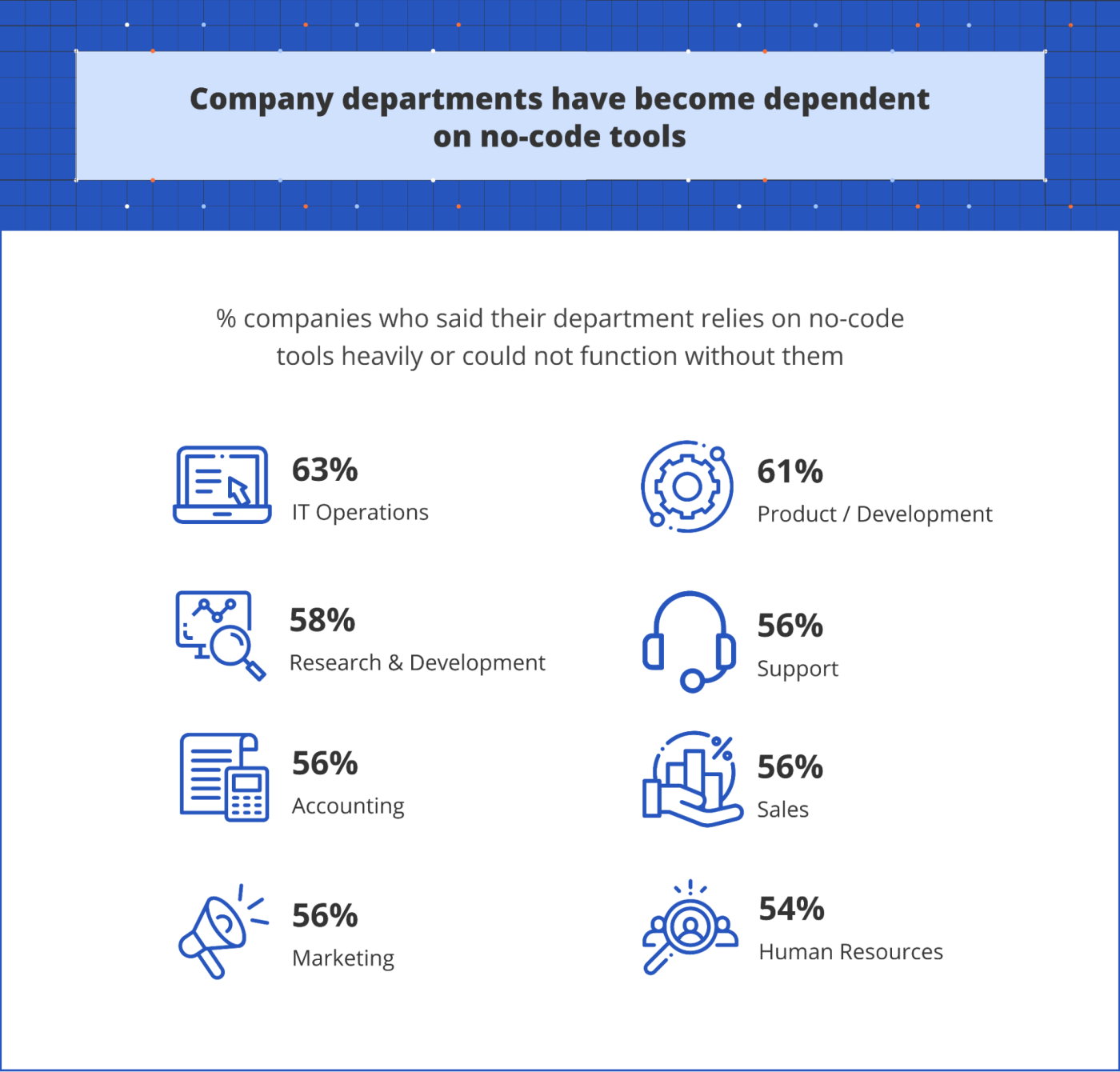 For those respondents who said their department relies on no-code tools heavily or could not function without them, IT Operations led the pack with 63%—mirroring results that showed professional coders and developers as the most prolific users—but virtually all other departments from diverse areas such as product development, research and development, sales, accounting, and human resources reported reliance on no-code tools above the 50% benchmark.

These results highlight the impact of no-code tools on an entire organization—not just in one or two specific areas. 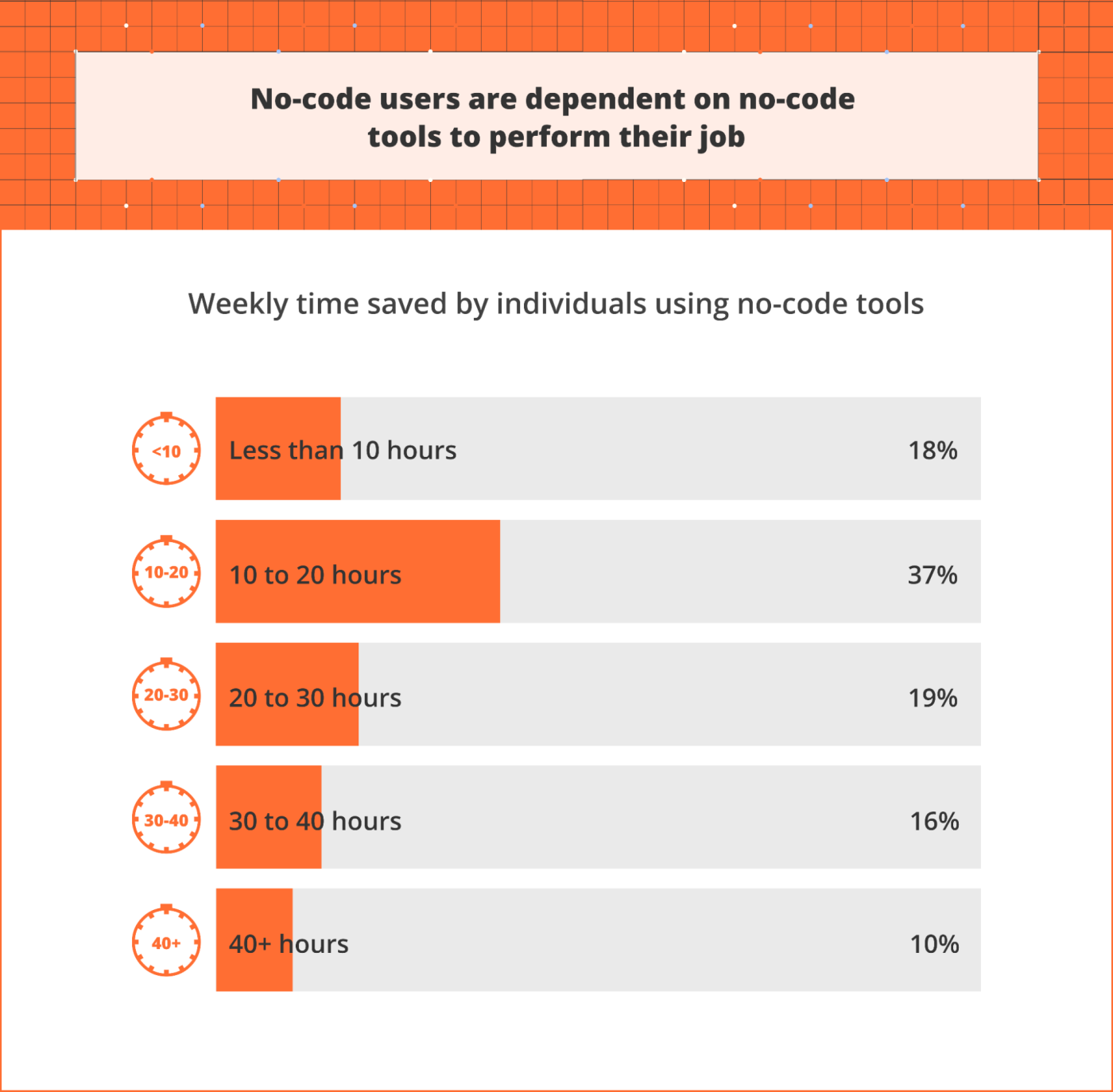 The future of no-code

Overall, our results indicate high new user adoption of no-code tools, very high frequency of usage by existing users, impact across the entire business organization, and large amounts of potential users who could greatly benefit but haven't yet taken the plunge.

As far as no-code tools have already come, the industry is still at an early stage: as more people try out these tools and experience the benefits first-hand, high adoption rates will fuel high repeat usage rates that will further increase the prevalence and reliance on these tools.

In fact, our data shows that more than 8 out of 10 no-code users plan to increase their usage during the coming calendar year.

This impact isn't listed just to our work lives: 3 out of 4 current no-code users say they also use such tools for their own personal projects.

That last one point is especially noteworthy: no-code tools in the not-too-distant-future may not only power the underlying operating system of businesses in all sectors, but it may provide the essential foundation that allows other personal and early-stage projects to thrive.