For Warby Parker, an up-and-coming brand in the eyeglass world, its two annual reports have made them more than look good, they've told stories that engage their fans, media and, surprising to even them, potential purchasers. The company learned this after the release of their first year-end report in January 2012.

"We were just blown away by the response," Warby Parker co-founder and co-CEO Neil Blumenthal told Fast Company in February that same year. "We thought some people would find it interesting, but it was retweeted 2,000 times and led to our three highest consecutive day of sales," he said, noting sales figures topped those following either of the company's two major media appearances to that point—the CBS Sunday Morning show and the New York Times.

"For us it was incredibly exciting that people were that interested in taking a look under the hood, so to speak," Blumenthal said. 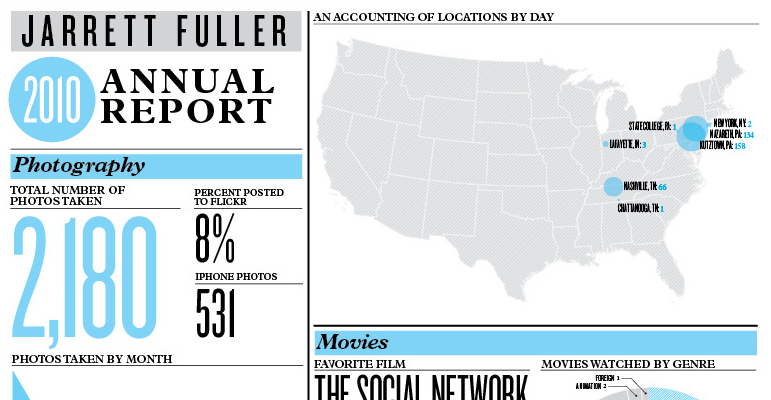 "The initial idea came because one of our designers, Jarrett Fuller, creates a personal annual report in the form of an infographic every year." - Neil Blumenthal, Warby Parker co-CEO

Whether it was Warby Parker’s initial report nearly two years ago, Nicholas Felton’s unique take on the concept since 2005—which inspired Warby Parker's designer—or a designer’s annual challenge of trying to wrap up a year’s worth of information into a concise and easy-to-read booklet, the one-page, online annual report is on the rise. It's a trend not being led by public companies, though they are participating, it's private companies and non-profits leading the way.

These new reports are interactive, engaging, informative, fun and, most of all, memorable.

In a recent team meeting at Zapier, the idea of creating such a report surfaced and within a minute there were a half-dozen links shared to reports that left an impression.

"Have you seen Airbnb’s?"

"charity: water’s is awesome, too!"

Besides this new style of reports’ dashing designs, what is it about them that makes people Like, tweet and share the websites? If we were to make one at Zapier, what data should we incorporate?

To find out, I went in search of the best 10 from last year to analyze their content.

The first step—finding 10 one-page, online annual reports from 2012—didn’t go as quickly as I anticipated. In fact, this trend seems to be so new it hasn’t yet been the subject of a list post on Buzzfeed. Really, it hasn't.

But after several Google and design portfolio site searches, these 10 reports emerged:

The diversity of the companies and organizations behind the reports is just as varied as the way in which each one presented their year-end summaries. For vacation rental startup Airbnb, for example, it was about visualizing growth while highlighting individual stories of travelers and hosts that are a part of that story. Using the company's service can be a very intimate undertaking—you’re staying in someone’s home—so its report reinforced images of the real people behind the business. For Sailthru, on the other hand, it took the report as an opportunity to not only share stats with visitors but pitch them on their product, as well. It’s just as much a product demo as it is a year-end summary.

These new kind of reports aren’t about putting the spotlight on a letter by the CEO or keeping facts and figures only focused on finances and personnel, those are the annual reports of old. These reports "do something wildly different," according to Tim Riley, director of online experience at Warby Parker.

Here's what Riley had to say about Warby Parker’s content strategy in an interview with The Muse:

We had this idea that annual reports are really, really boring so how about we kind of flip it on its side and do something wildly different. What we did is sort of create this visual annual report, that was very infographic-based and we just thought it would be really fun to dig into our data and compare things like what types of bagels we ate in the morning, how many monocles we had sold and take these random stats and throw them together in a very cohesive manner.

It worked. The report's authenticity, Blumenthal later said at a business conference, quickly caught on to a wider audience than only the dedicated fans they expected to consume it.

Soon after Warby Parker's release of its 2012 report, tweets citing it began flooding news feeds. "Loving the 2012 @WarbyParker Annual Report and the company's apparent obsession with bagels," one person wrote. "Who says Annual Reports are boring? It may lack key components, but check out this creative take from @WarbyParker," said another person. "Who sold 296 monocles in 2012 and made 2,253 PB&J sammies for Sandy Vic's?" Tweeted a designer.

Shaped by trend leaders like Warby Parker, these new reports are taking notes from one another and patterns are emerging. Digging into the 10 reports from 2012, the following 11 content strategies were used most frequently (ordered by volume of frequency):

How the Reports Performed

Honing in on the six biggest brand names of the bunch, each has a strong base of social media followers to help share their content. Here’s what that would look like if they shared a piece of content today.

If all online annual reports had been created equally, charity: water would have seemed poised to receive the most social shares for their report. The company has a history of making viral content (check out their amazing videos) and their organization is extremely participatory—donors, fundraisers and champions of their cause are spread throughout the world.

Kickstarter also carries that strength of participation, and along with startups Airbnb and Warby Parker, is a media darling.

Here are the social media sharing numbers, according to Moz Open Site Explorer, roughly one-year after the reports went live:

In the end, Kickstarter’s report carried the most virality, coming away with being shared on Facebook more than 6,000 times and logging a whopping 12,000 Facebook likes. In a distant second is MailChimp and trailing not far behind are Warby Parker and Airbnb.

The first two reports couldn’t be more different. MailChimp’s is a well-presented one-page site that’s heavy on numbers, almost too much so but not quite. Kickstarter’s is an experience to take in, it’s an interactive slideshow that surprises you with outcomes—for example, "10% of the films at Sundance are Kickstarter-funded"—that tell the stories stats alone cannot.

Warby Parker’s is also heavy on numbers, but more than MailChimp’s, it is full of photos, icons and graphics that bring the figures to life. Of the four far out in front, Airbnb is the simplest of them all, only providing about a dozen pieces of content.

One thing the four have in common, important to note, is that a story is told through the report. 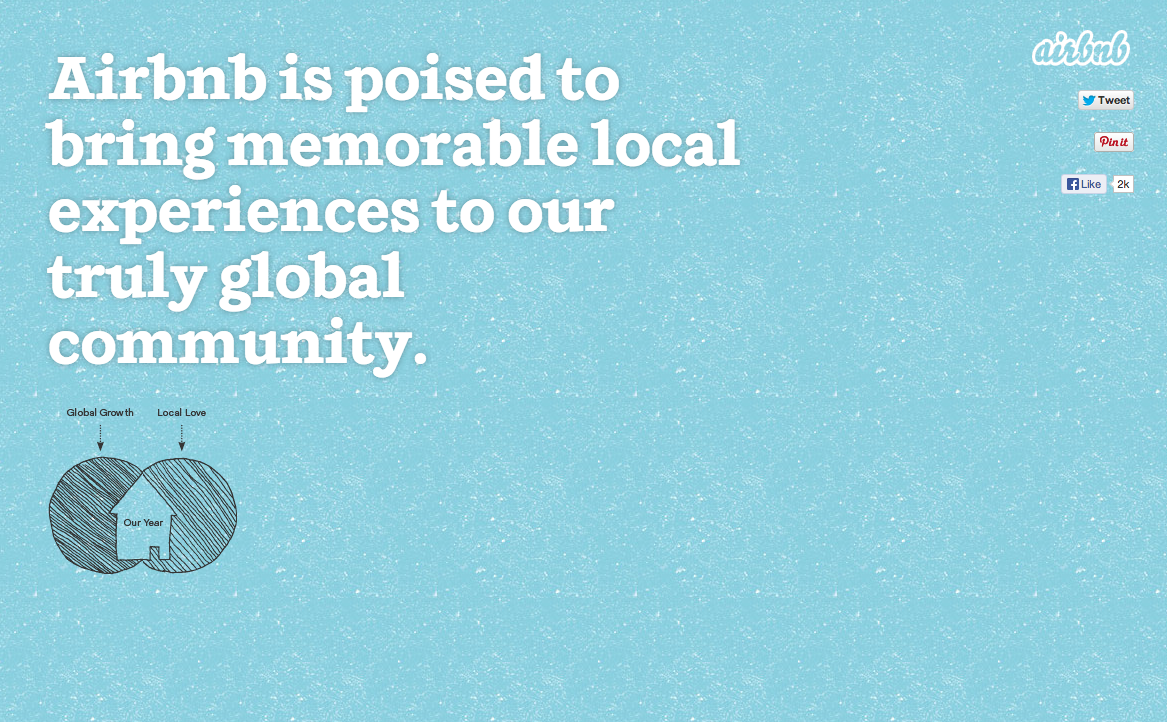 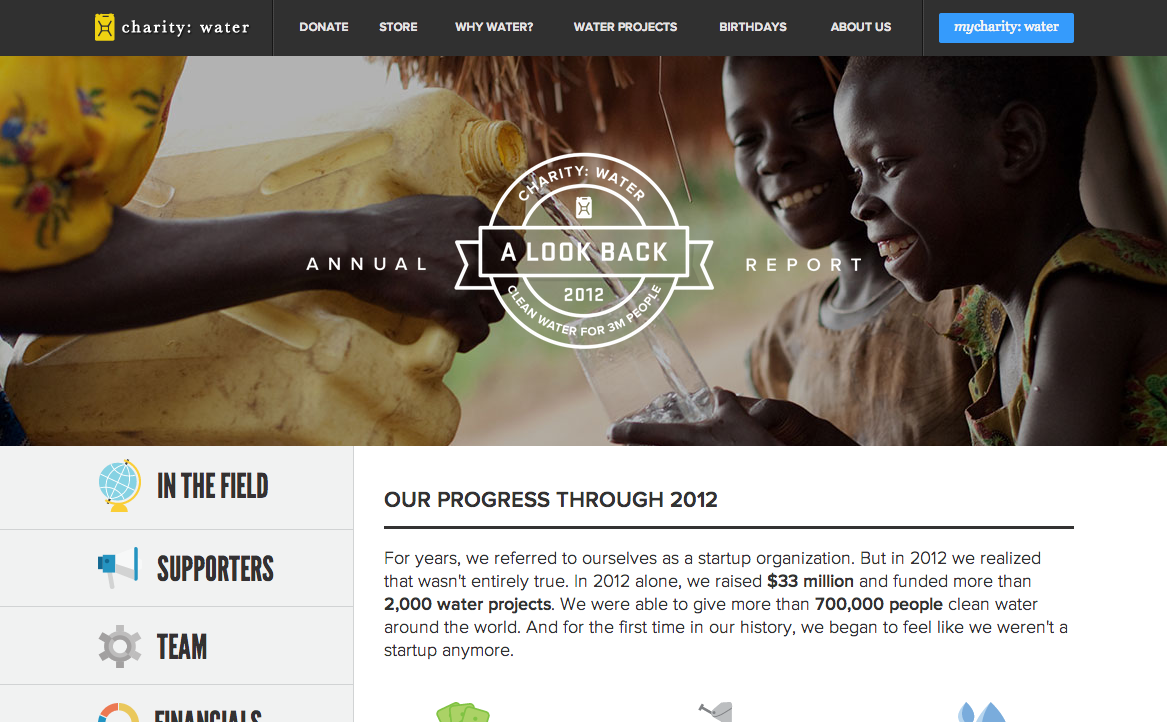 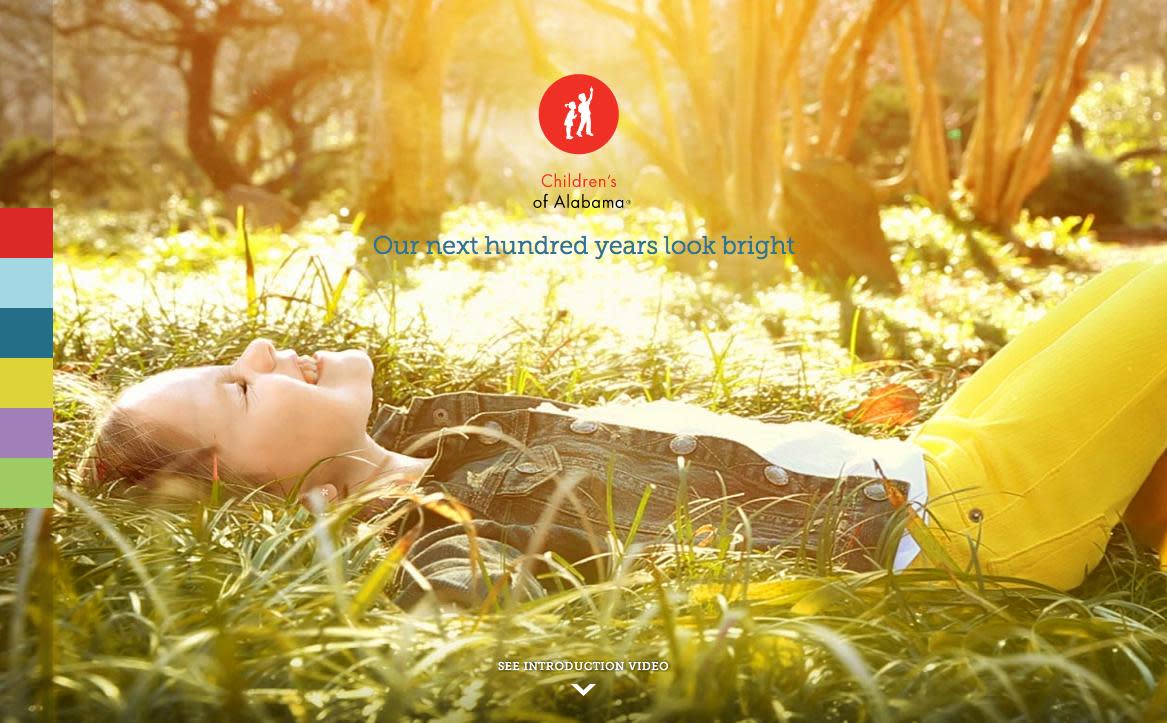 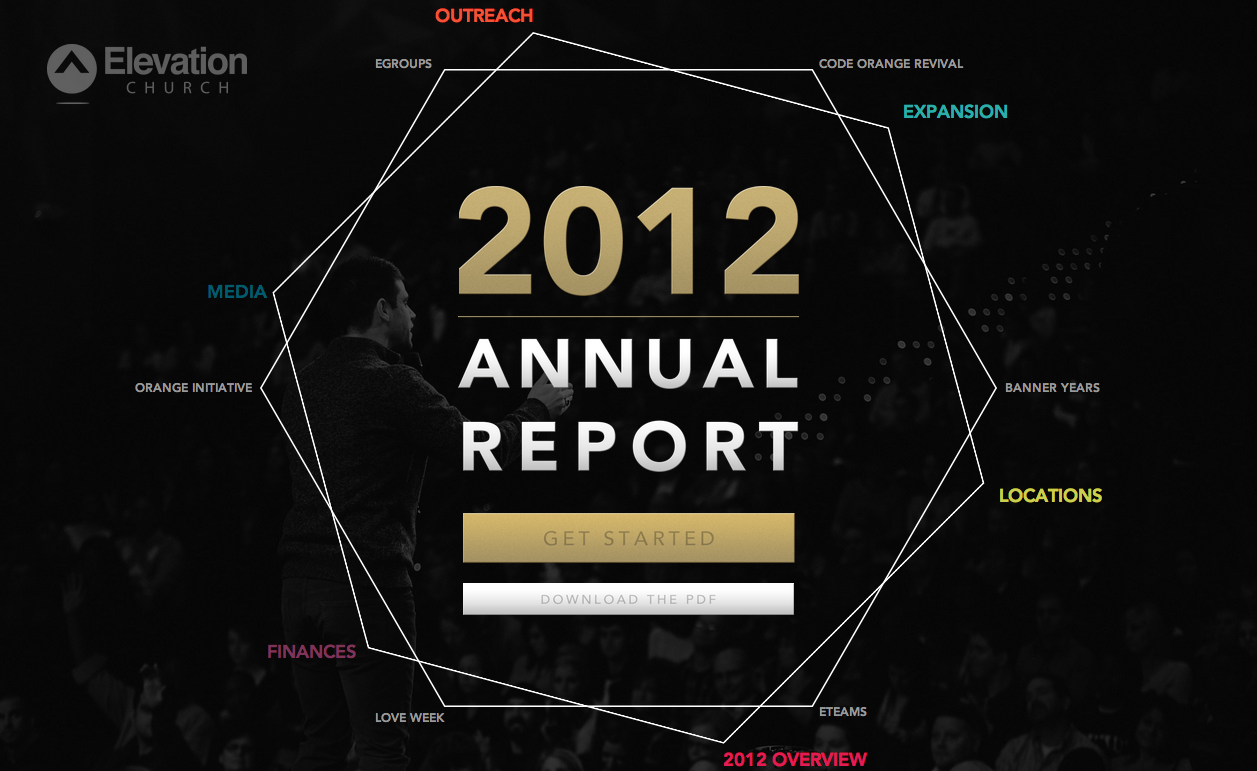 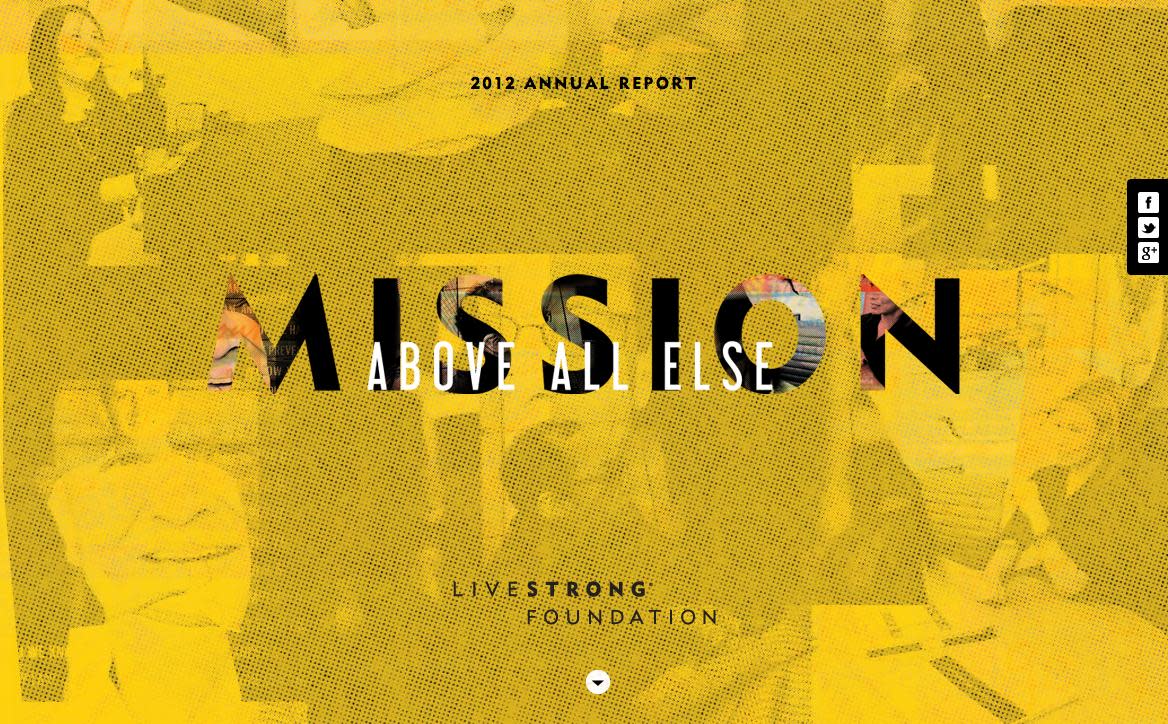 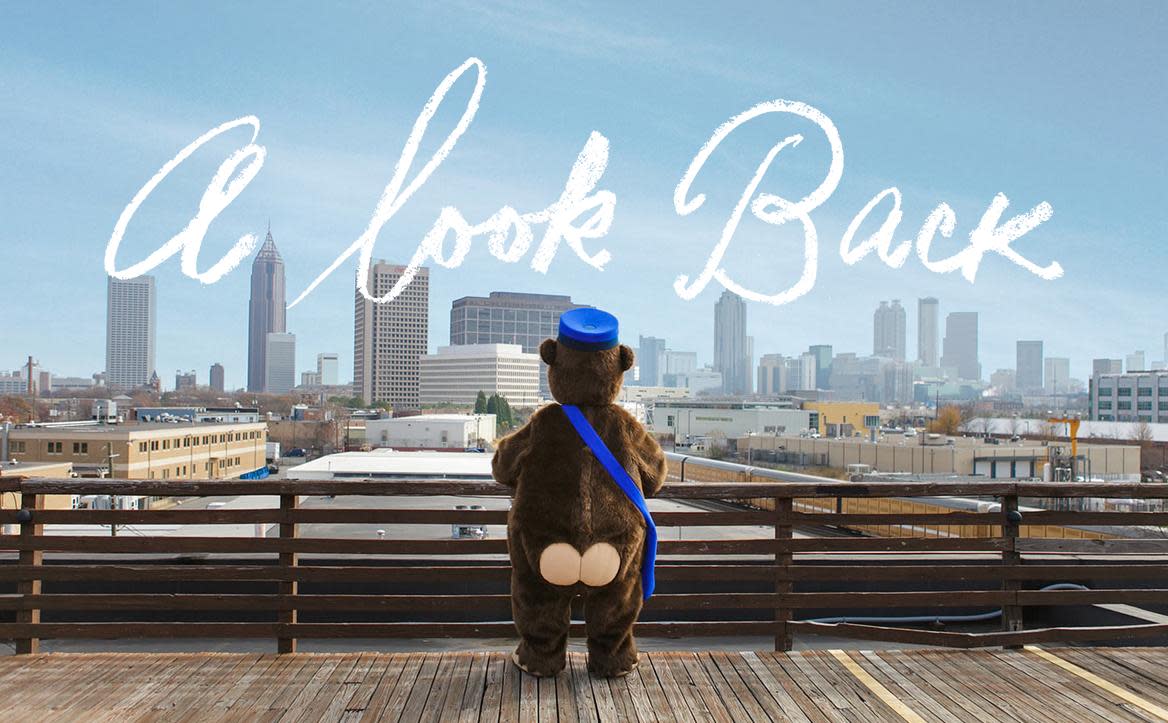 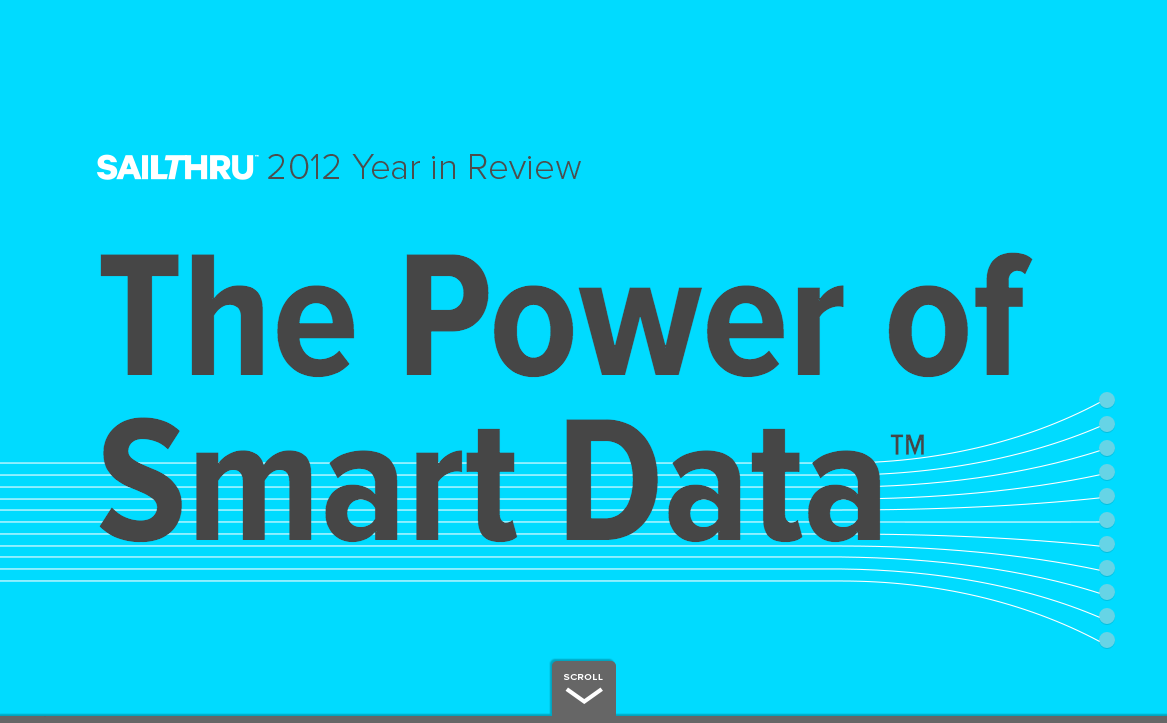 Bonus - Watch: "The Making Of the 2011 Warby Parker Annual Report"

And Even More Reports, but Not One-Page

In the search for well-designed one-page annual reports, these surfaced and are too good not to be shared. The Calgary Zoo in 2012 put a new twist on the annual report, delivering their organization’s recap via Instagram.

In 2011, just a handful of companies summarized their year’s work using a one-page website. The following year, more than a dozen began to define the trend. This year, with one report already out even before year’s end, it’s likely we’ll find at least two-dozen one-page, online reports making their rounds on social media. Whether they’ll bring companies the same outcome Warby Parker’s yielded that first year—record sales over three consecutive days—is to be seen. One thing though is for sure: the competition among designers for annual report creativity is making its move from the paper to the screen. Now it'll be interesting to watch for what new is injected into the reports in an attempt to increase virality.