If my manager ever texts me "hi," "hello," or "hey," without any further context, I will assume that I'm fired. It's the only logical conclusion. The same goes for "are you around?", "let me know when you get in," and "can we talk?"

I would have no idea how to respond to these messages. I know this because I ran an advanced computer simulation of this exact scenario, using an AI replica of my consciousness (a Black Mirror Slackbot, basically). Here was the result:

You might think I'm paranoid, and you're not wrong. But there's more to this than my personal hangups: I know people in multiple industries who have gotten messages like this and assumed the worst.

Managers, consider this a PSA. Don't text your report "hey" and then wait for them to respond. Get to the point, or we're going to assume the point is very very bad.

Let's talk more about why.

Learn how to make small talk while working remotely (without being weird).

The history of hello

What do you say after you pick up the phone? Most people say "hello," and there's a reason for that: phone companies taught people to say it in the 1800s.

When you call someone on the phone, it's not clear when the other person is there—unless they say something first. The English word "hello" was invented for this reason. The word caught on, in part, because phone books instructed people to begin conversations by saying "hello" as a way to confirm both people were on the line. This habit, and the word, stuck. The medium created a new kind of etiquette.

This tech-to-etiquette pattern happens regularly. Team chat tools are a different medium than the telephone and require a different kind of etiquette. You don't need to confirm the other person is there before you begin talking because they'll see the message when they log in. At Zapier, we've been a remote team for around a decade, and one of our Slack etiquette rules is "Don't wait for a response before getting to the point."

Get to the point

Because text-based messages are different from a phone call, saying "hello" before getting to the point actually makes communication take longer:

This is less efficient than the alternative:

This is normalized at our company and in text messages more broadly. Doing anything else feels odd, and odd behavior makes people ask questions.

Alfred Hitchcock, film director and master of suspense, is attributed as saying, "There is no terror in the bang, only in the anticipation of it." That's what makes a simple "Hey," from a manager so terrifying. The default, over team chat apps, is to just explain what you want or need. Not doing that implies that you've got something serious to say—something you prefer not to say before you know the other person is there. In my mind, that means I'm about to be fired.

Of course, mistakes will happen—that's ok. My Zapier colleague Janine, who was also once my manager, sometimes slips up. But, as she explains, she's good about correcting herself:

I always forget that these kinds of messages are anxiety-inducing until immediately after I send them, so I think everyone who has ever had me as a manager has gotten things like

Janine: nothing is wrong I promise just a sec

Janine: I think you did a great job on that last piece, but I have some questions about structure. I left a few comments, but if they're not clear let me know.

I love this. It's such a thoughtful way to course correct. If you ever say "Hi" to your direct report, don't panic—just keep typing.

But what if I actually do want to fire you?

That's a good question! If you want to fire me, feel free to text me the word "hey" without any context. I'll figure out what you mean, move to the mountains—far away from any internet access—and begin my new life as a hunter-gatherer. This will not go well, which is entirely your fault, but you don't need to worry about my Glassdoor review because I'll be off the grid.

More seriously: if you actually do need to have a serious (and potentially career-affecting) conversation with someone in a remote context, consider doing it during a regularly scheduled one-on-one session, so there's no pre-conversation anxiety. Or you might do what Janine does:

Let them know the context of the conversation before starting the video call or phone conversation. Just like you wouldn't give someone sensitive feedback in the middle of an open office, let them get settled in the right space for a difficult conversation [virtually].

Either way, it's better to have conversations like these face to face, not via text. It's the kind thing to do.

Speaking of kind managers—here's Deb at Zapier posing for my absurd GIF above. 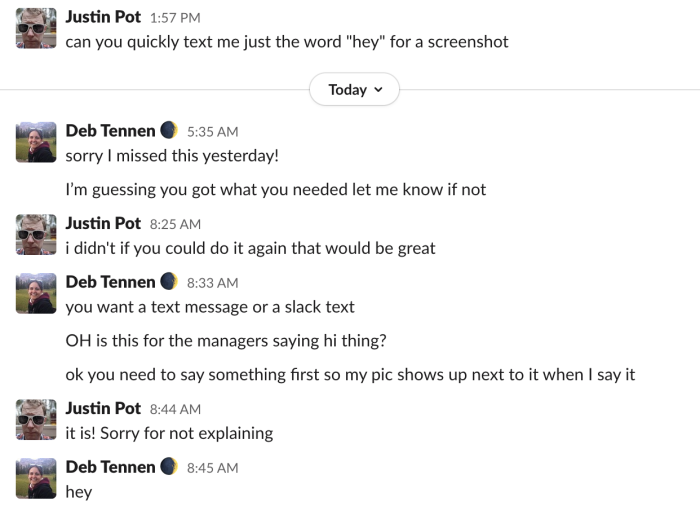 Thanks for putting up with my crap, Deb.