How Tamagotchis and TI-89s launched lifelong careers in tech

There's no normal path into tech. There are plenty of weird ones.

You might have a picture in your head of a standard career path into tech. Maybe it involves studying computer science, or putting on a black hoodie and teaching yourself how to code in a room lit entirely by Matrix screensavers.

The real stories, in my experience, are a lot more human than that.

I recently met Mary Albright, whose tech origin story involved playing with Neopets as a kid before using Zapier to manage her international high fashion modeling career. Today she works as a developer.

It made me wonder about other origin stories, so I asked Twitter how people ended up in tech. I heard stories about everything from MySpace to the TI-83 calculator: seemingly insignificant things that sparked curiosity—and led to careers.

Kay-Kay Clapp is the head of content at iFixit, which is the place to go if you want to learn how to fix your phone, computer, or just about anything else. Kay-Kay spends a good chunk of her time convincing people they don't need to be geniuses to fix things, so it makes sense that her origin story involves replacing batteries. 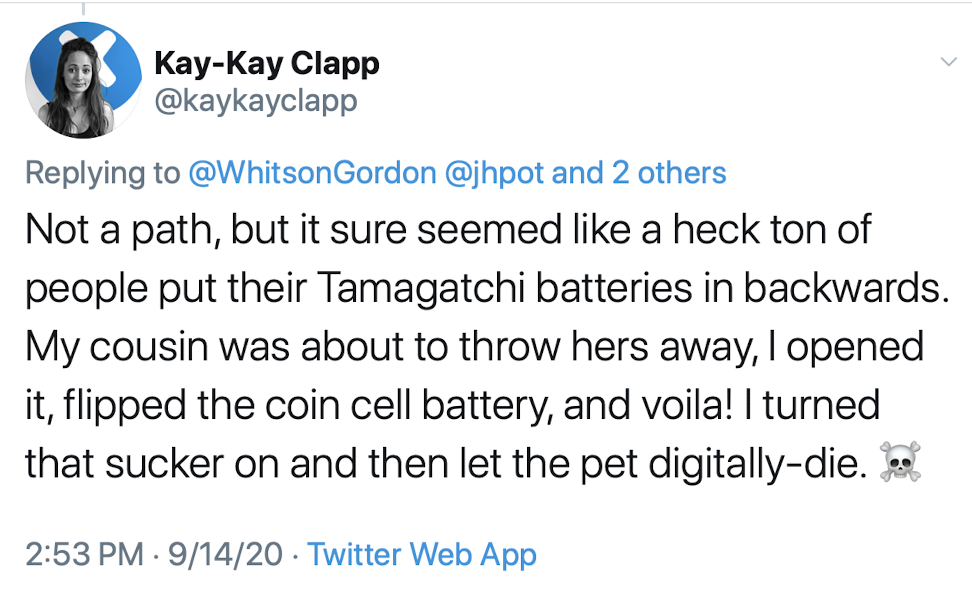 Flipping a battery is a very small thing, but it points to a mindset that Kay-Kay grew up with.

"I had no tech experience before starting at iFixit," she told me. "But my parents were both born in the Philippines so I was raised with a 'waste not, want not' attitude that definitely stuck. We were constantly repurposing things as a kid, and if something broke, you fixed it."

This mindset serves Kay-Kay well now, convincing the world that the devices in our lives are worth repairing.

The year of the Linux desktop

Speaking of things that need fixing: Linux. My friend Katie Redderson-Lear, a developer at Zapier, mentioned using Linux as part of her path into tech. 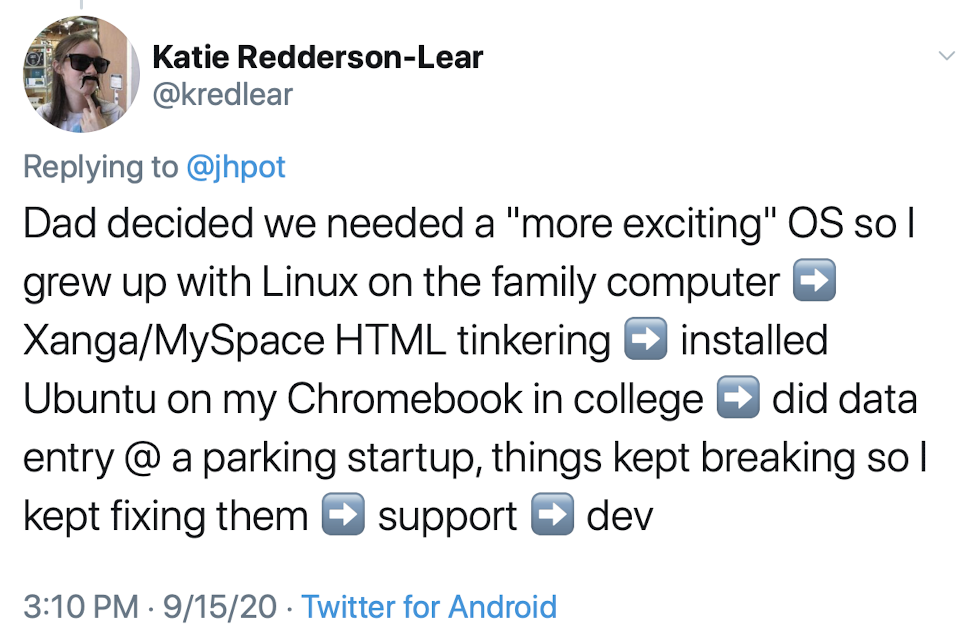 Katie studied linguistics, not computer science, in college, but went on to work at a parking startup. Her background using Linux—which involves a lot of troubleshooting—meant she was used to fixing things by the time she got a data entry job. At least, she tells me, she was used to trying to fix things—which was enough.

This makes sense to me because it's similar to my background. I always loved fidgeting with computers, exploring the settings and tweaking things. I broke the family computer a few times. By college, I had my own device that I installed Linux on, primarily so I could break things in new and interesting ways.

It was just something I did—I never thought it would be useful. The plan was to work in journalism, which is what I did after college. But by 2009, a recession meant the only writing work I could find was writing tech tutorials for a content mill. Which, it turns out, I was pretty good at, in part because of all that time spent messing around with settings. I didn't make much—just $15 per article explaining how to do very obscure things.

Eventually, I found gigs at other, more mainstream sites, which paid a decent living. I hung out on Twitter a lot, making friends with other writers. That ultimately helped me get a few different jobs, most recently writing here at Zapier.

Learning HTML on MySpace and Xanga

Emily went on to study digital marketing, and today she's a key part of the Partnerships team here at Zapier. And it all started with a desire to tweak code on social media and blogging sites.

Messing with TI-89s for fun and profit

Emily mentioned the TI-89, and other people also brought up graphing calculators. Platypus Man, celebrity internet commenter and full-time developer for nearly a decade, started coding by making software for the TI-83 when he was in middle school. 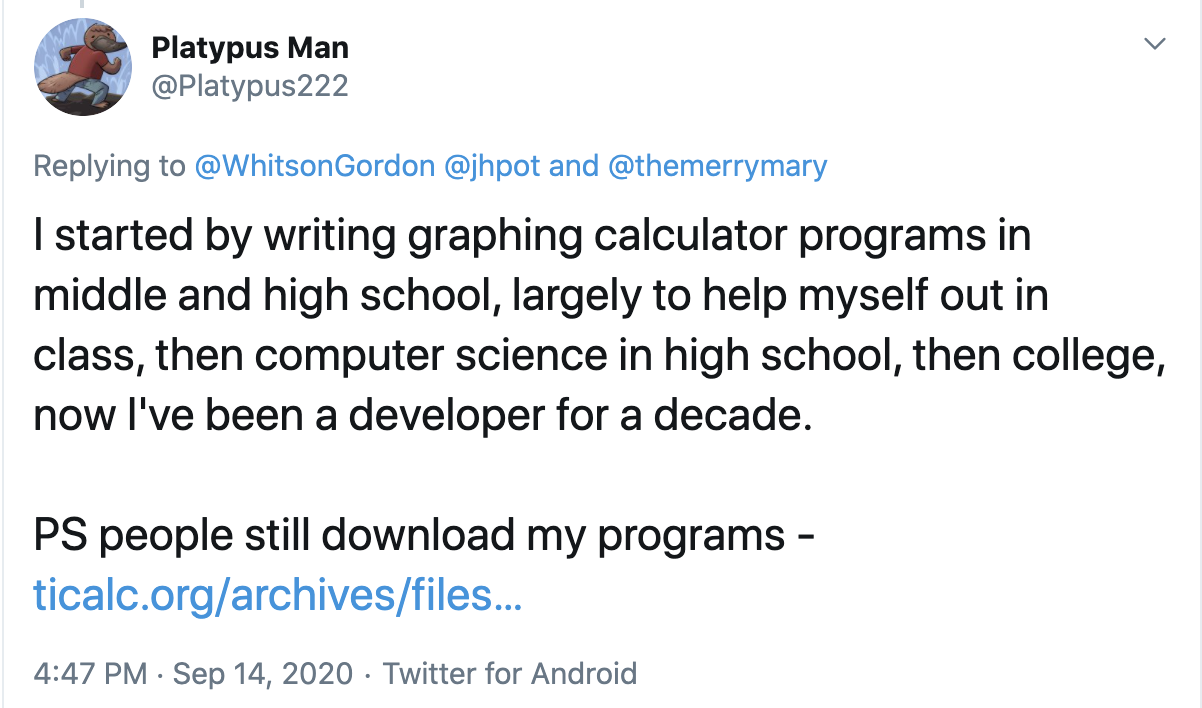 So many of us had to use these graphing calculators in school. I remember downloading a bunch of games and other programs, then spreading them to other kids using the bundled transfer cable. I always knew, in the abstract, that someone was making this code. Apparently, it was a Platypus Man—one who is still writing code today.

I could keep going

I heard so many stories like this—people with unlikely entry points into tech. Stacie Taylor, another developer at Zapier, studied Communications in college but today works as a developer.

Other people got started building websites for family friends, playing Reader Rabbit, or making software for the Palm Pre.

There's no one career path into tech. I've learned, from stories like these, that what matters most is curiosity. Find something that interests you, press all the buttons, and see what you can build. And remember that you don't necessarily need code.