How to stay productive during a crisis

You might be a productivity master under normal circumstances, but when a crisis hits, everything gets turned upside down. We're more distracted, have less time to focus on work, and are operating in a completely new context. Instead of assuming our productivity superpowers will stick around, we need to be deliberate about making adjustments to our process, tools, and mindset.

I'm on the Learning and Development team at Zapier, and I recently hosted an all-hands meeting about reevaluating your productivity during a crisis. Here I'll give you some tips I gave my team on how to be as productive as possible when productivity is the last thing on your mind.

This is not a guilt trip

Let me start by saying: this is not a guilt trip. During a crisis, it's unlikely that anyone will be at 100% productivity—after all, we're dealing with constraints that are completely out of our control. Hopefully, your managers and leaders understand this and work with you to set clear productivity expectations. You're going to be able to accomplish less overall, and that's okay.

What I'm proposing is that we can maximize the time, energy, and attention we do have left for our work. Instead of giving total control to the crisis, we intervene. Just like social distancing measures help flatten the curve of COVID-19, with some intervention, we might be able to flatten the inverted productivity curve. 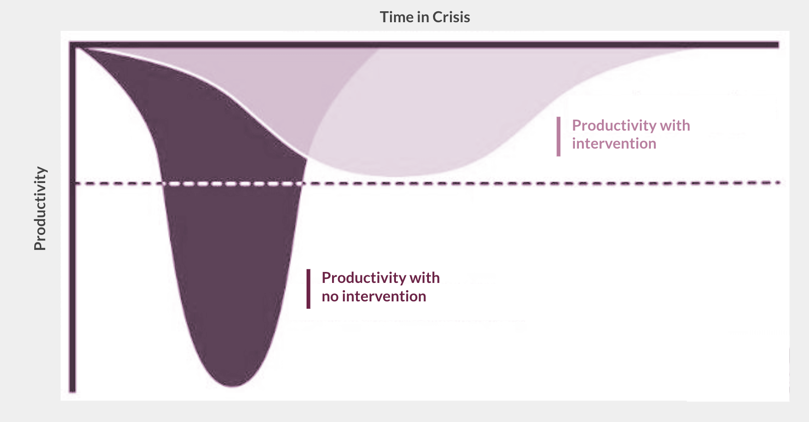 What is happening in our brains?

During this time, you might feel like your brain isn't working how it normally does. That's because it's not. During periods of stress, a couple of things happen to our brains. (Note: I'm not a brain scientist—surprise!—and a lot of this is generalized.) 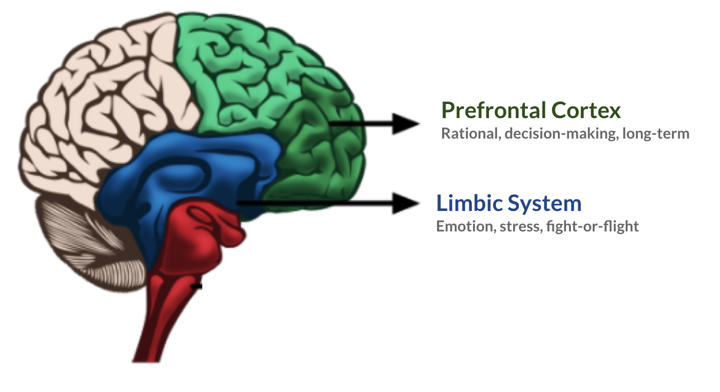 Your prefrontal cortex doesn't fully develop until you're about 25 years old. So in some ways, your behavior during a stressful time gets a little closer to how a 13-year-old might act. And for anyone who hasn't completely blocked out that part of their life, you remember it was an emotional time. And probably not the most productive.

Here's why this matters: during a crisis, we need to be extra deliberate about re-engaging our prefrontal cortex. If we aren't intentional about this, our limbic system is going to take over. It's millions of years older, so the cards are stacked in its favor if we just let things run their course. No, we won't turn into animals, but we might just curl up into a ball and cry as much as we did when we were 13.

How to get back some productivity

One way to flex that prefrontal cortex muscle is to find things that are triggering the limbic system and replace them with things that trigger the PFC. Of course, there are some situations during a crisis that we simply don't have control over. Identify those and set them aside, and let's focus on what we do have control over.

Even if you don't have more to do during a crisis, you likely have less capacity to do it. Organizing your tasks, triaging new projects—all of that will feel more stressful than it normally does. My solution? Do less. It's not easy, but you need to prioritize.

I've gone out of my way to create a "don't do" list. I don't like to drop stuff off my list completely because I might want to come back to it down the road, but I make it a habit to add things to this list every week. Then, I just don't do those things. 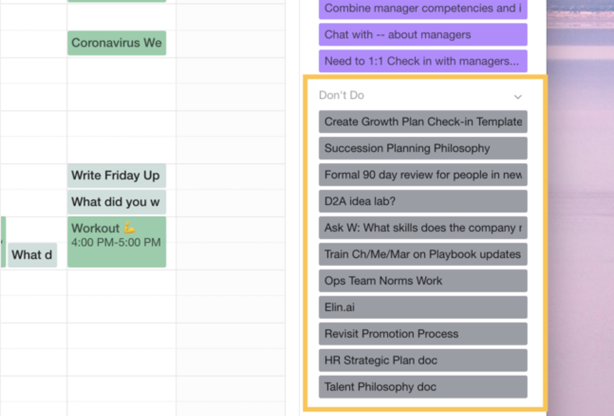 If you find it too difficult to remove tasks completely, try to shrink the less important stuff. For example, add time constraints to the administrative tasks you need to do. Or look at your calendar: if you have a weekly meeting that's an hour long, can it become 45 minutes instead?

Last, work on learning to say no to new tasks. There are always new ideas flying around, and it's tempting to want to say yes, especially when it would help the people around you. Now is the time to stay extra focused on what matters most. When a new project or task comes your way, have a high bar for accepting it. Make sure it aligns with your top goals and that it can replace another important item on your task list.

When I was presenting this information in the Zapier all-hands meeting, I asked everyone to take a quick poll about how many times they'd checked Slack since I started talking. Over 75% had done it at least once. (And note: I didn't ask about checking email, texts, social media...I'm guessing if I had, the number would have been closer to 100%.)

And I get it. When you're dealing with a noisy workspace—and a noisy life—it's near impossible to stay focused without deliberate effort. In fact, one study showed that even knowing you have an unread email in your inbox can reduce your effective IQ by 10 points. And even if your phone is off, if you can see it, it reduces cognitive capacity. I'd guess the same goes for Slack. 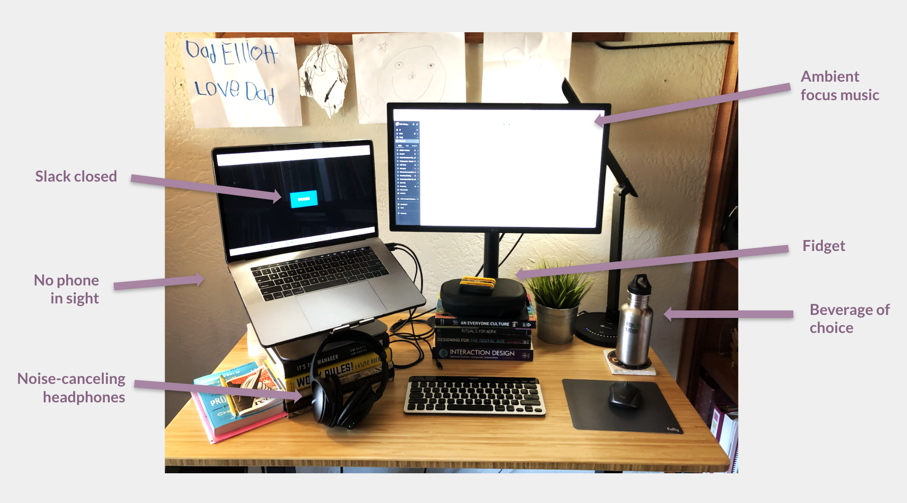 This is my focus-optimized workspace.

So to get that prefrontal cortex going again, try to tame the distractions. There are apps that can help block distractions, but you can also do things like turn off Slack, put your phone in the other room, or even disconnect your WiFi.

According to a 2010 study, we spend 46.9 percent of our waking hours thinking about something other than what we're doing. And that's just generally—imagine how much that increases during a crisis. The trick is not letting those thoughts turn into actions.

As I was putting together the presentation of this info for my team, my mind wandered quite a bit (probably well over 46.9 percent of the time). And I actually let those thoughts change my behavior. In the course of 30 minutes, I did these not-so-productive things:

Not great. But there are some things you can try to prevent that from happening. Start by just writing down your wandering thoughts. This can help get them out of the way and also prevents you from acting on them since you know you'll have your list later. Plus, it'll let you self-assess to see how much of an issue these wandering thoughts might be for you.

Another option is to use the Pomodoro Technique. It boils down to a series of 25-minute work sessions followed by 5-minute breaks (with longer breaks after four sessions). By doing this—or some version of this—you give yourself some built-in time for wandering thoughts, which might help you push them off until that break comes around.

Finally, you might pick a scenario and, the next time it comes up, try to be fully attentive during it. For example, in your next meeting, do everything in your power to be fully attentive. Train your brain to build that attention muscle, and you might find that it's easier to be attentive in meetings going forward. And eventually, that will expand to other situations too.

I'm a former teacher of students and a current teacher of employees, so of course, I created a worksheet to help get you started. Some of it was Zapier-specific, but this section should help you reactivate that prefrontal cortex. 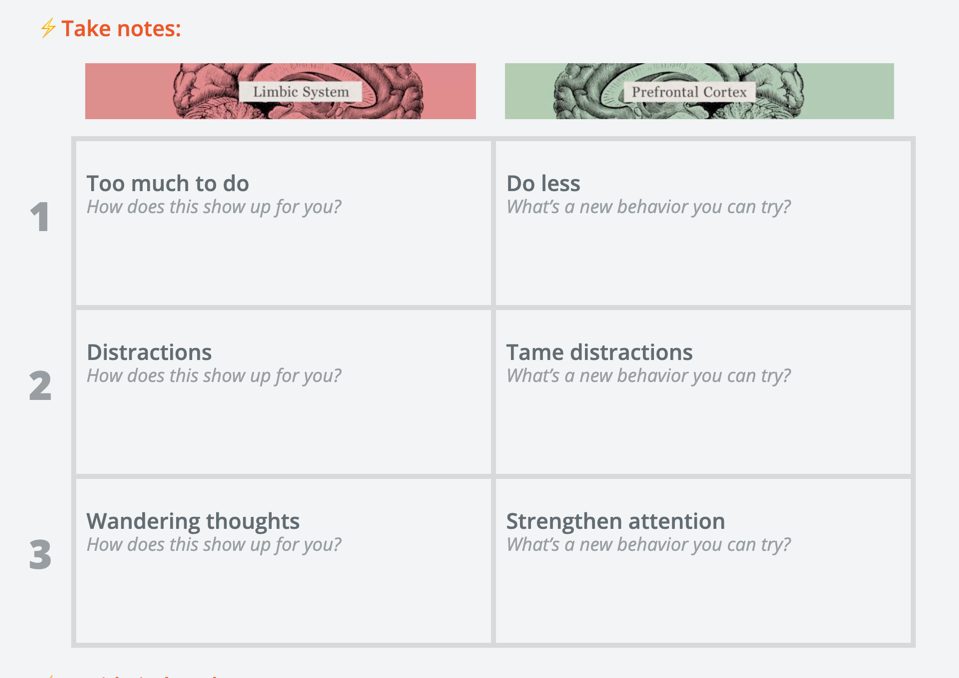 My suggestion to you is to pick one behavior in each category that you're going to work on. You probably won't get back to 100% productivity during a crisis—and that's okay—but hopefully you can make some incremental changes to help flatten that inverted productivity curve.

Colin Monaghan is part of Zapier's learning and development team, and works in Port Angeles, Washington. He likes spending time outdoors, reading, and watching hours and hours of baseball.