With books like Atomic Habits by James Clear and Tiny Habits by BJ Fogg cracking the New York Times bestseller list over the past couple of years, building good habits—or breaking bad ones—has never been a more popular idea. And one of the most powerful ways to stick to your new habits is by tracking when you do them.

There are lots of apps that offer some kind of habit tracking. Most are based around the idea of building a daily streak or not breaking a chain of Xs on a calendar, although some offer a bit more nuance than that, allowing you to set the number of days per week or month that you want to do your habit. We considered more than 30 of the most popular habit tracking apps—a lot fell short, but after extensive testing, here are the best five.

Habit tracking is an inherently simple idea. Did you do the habit you were trying to build today? If yes, check a box. If no, don't check a box. It's so easy you can just use a wall calendar and a red pen.

This simplicity meant there were a massive number of apps to consider, and we were able to set the bar really high. For a habit app to be great (and to beat out a wall calendar), it has to: 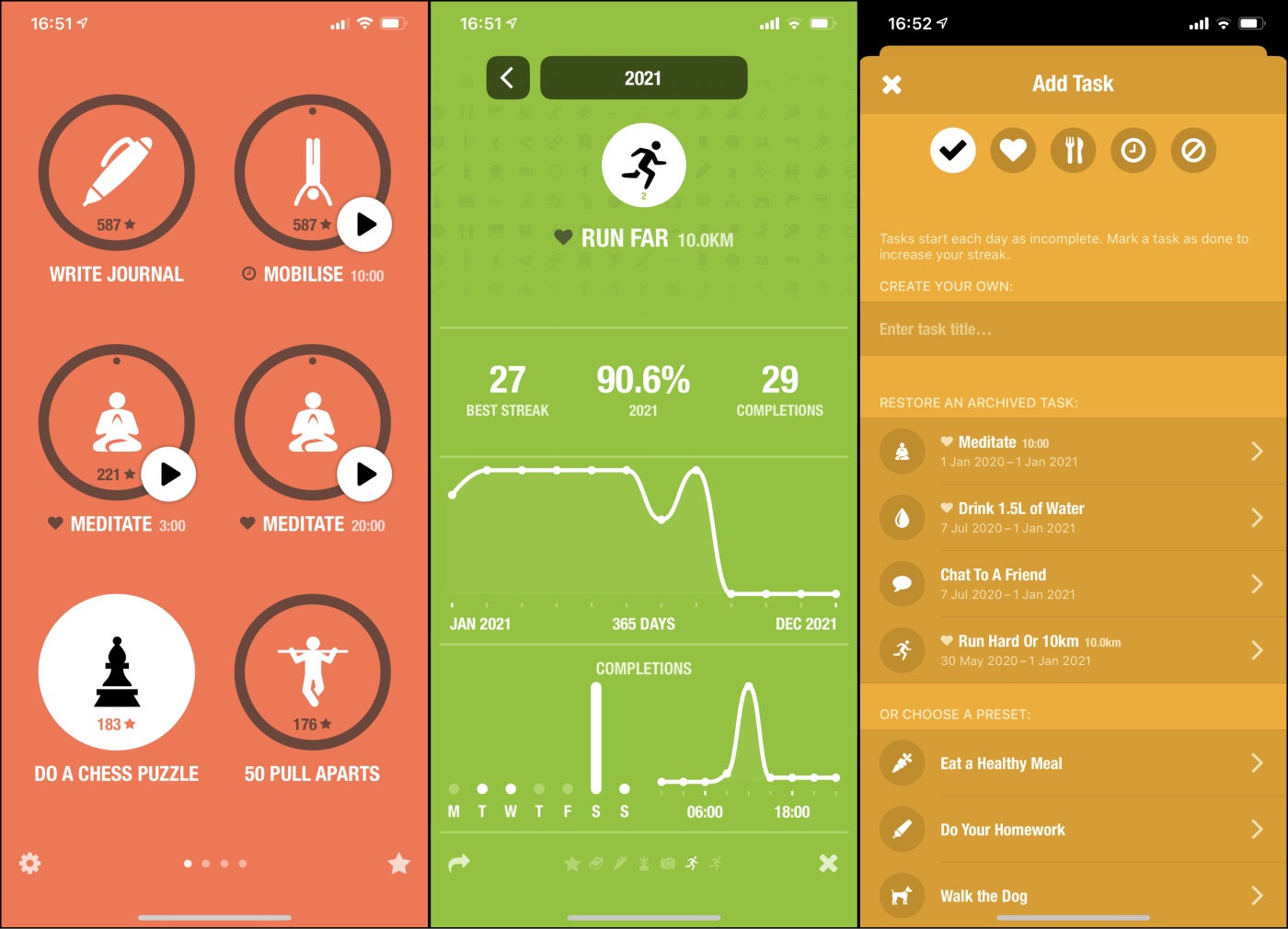 Streaks is the standout habit tracking app for iPhone users (and the one I use daily). It's super simple and quick to use, while offering enough options for tracking any kind of habit. It's, somewhat obviously, based around the idea of building and maintaining a habit streak.

Streaks enables you to track daily, weekly, and monthly habits. When you tap the big Add Task button, you can choose from a preset option like "walk the dog" or "eat a healthy meal" or create your own custom habit. Whichever way you go, you'll be able to set the habit as due on a certain number of days per week or per month, on specific days of the week, or recurring every few days. You can also set it so you have to mark the habit off multiple times per day, like, say, brushing your teeth twice.

Streaks also integrates with Apple's Health Kit. This means you can set habits that are automatically marked off by the data collected by your iPhone or Apple Watch, like walking a certain number of steps, sleeping a set number of hours, or working out for at least an hour each day.

Once you're set up, checking off a habit takes two taps: one to open the app, and another long tap on a habit to mark it as done. That is, of course, if your iPhone hasn't already checked it off for you.

For such a simple app, Streaks also offers surprisingly good statistics about your habit streaks. Tap the star icon in the bottom right corner, and you'll see an overview of all your streaks, how often you've completed them, on what days, and at what time. You can then tap on any of the task icons to see an individual breakdown of the same data.

Streaks Price: $4.99 each for the iOS app and the macOS app. 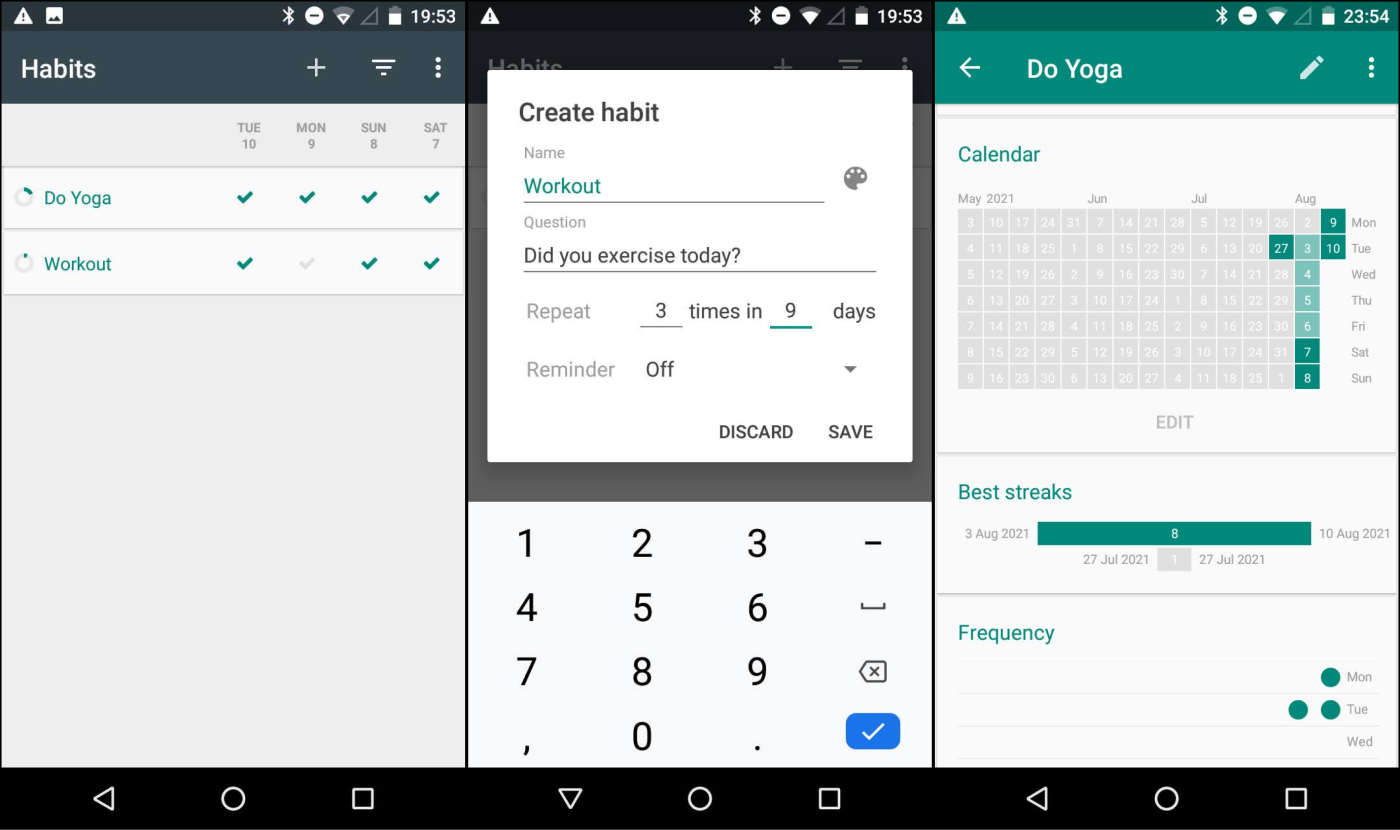 Loop is an incredibly simple but functional habit tracker for Android users. It doesn't look quite as good as Streaks, but it's just as easy to use. Plus it's free and open source.

With Loop, you can track daily, weekly, and monthly habits. To create a new habit, you tap the + icon. Once you give it a name and description, you can set how often you want it to repeat and whether you want reminder notifications. While you can't set specific days for a habit to fall due on, you can use the customization options to have something due five days out of seven (every weekday), two days out of seven (every weekend day), or even three days out of nine (no idea, but it's a cool option to have).

One nice touch with Loop is that on the home screen, you see the previous four days, and you can check them off. That means that if you forget to mark off a habit one day, you can easily do it the next.

Tap into any habit, and you'll see all the stats about how long your streak is, how often you do it, and when you most often check it off. Loop also gives you a custom habit score: if you've stuck with a habit for a long time, a single missed day won't completely reset your progress.

There are a couple of other solid habit tracking apps for Android, but they're both more expensive than Loop, which is why they missed out on our list. Both HabitHub ($5.99) and Avocation ($9.99) are worth a look if you want something different. 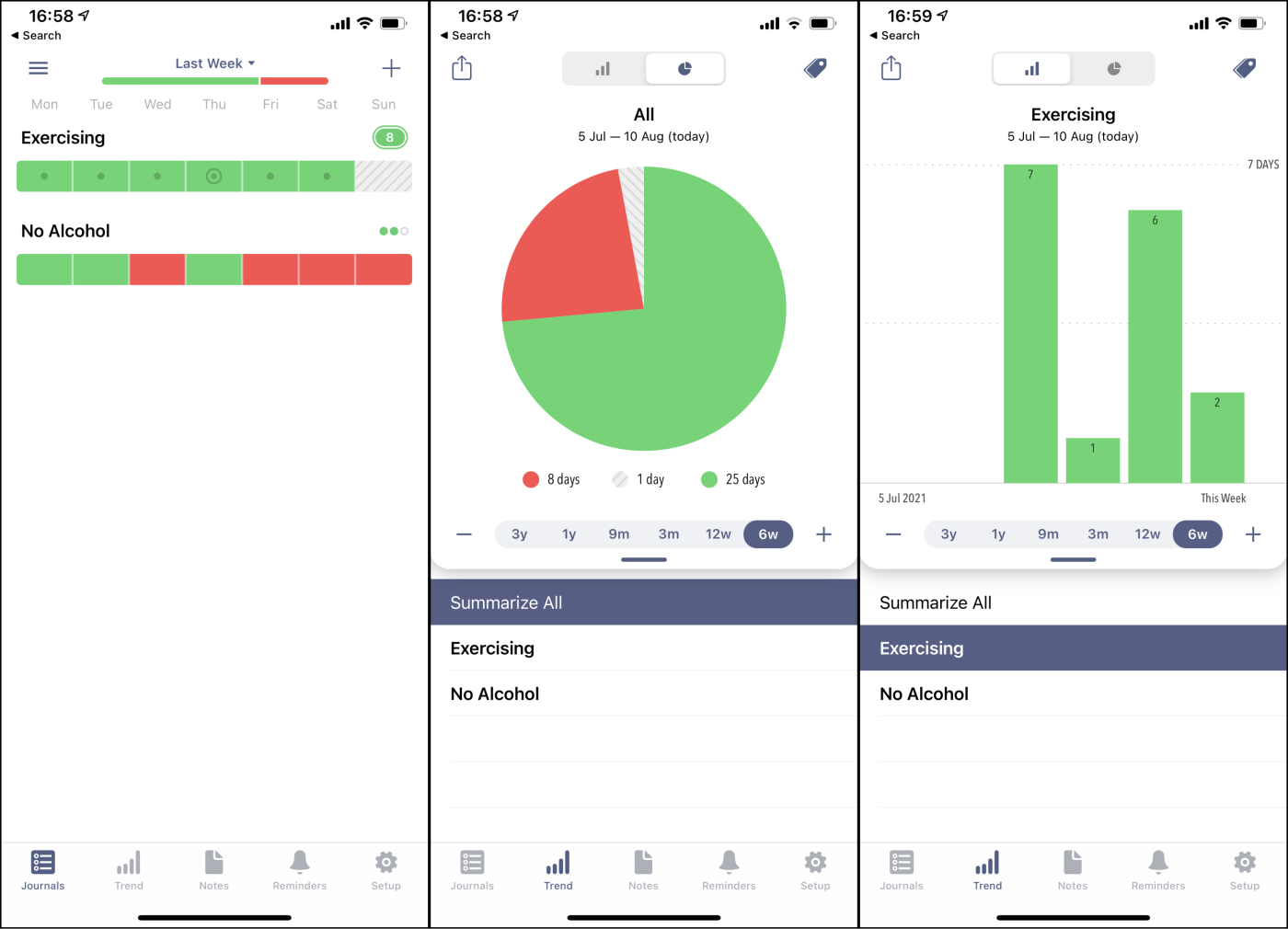 Most habit tracking apps are pretty binary: either you do the habit and keep your streak going, or you don't do the habit and break your streak. While this can be great for forming new habits, it can be a little too strict for some things. This is where Way of Life comes in.

In Way of Life, each habit gets its own journal. On any day, a habit can be marked as done, not done, or skipped (which doesn't break any streak). You can also swipe to the right and add a note explaining, say, why you broke a habit or what workout you did. This way, you can build up a much better picture of what habits you're sticking to, and when and why you're not doing them—all of which can be explored in the Trends tab.

Way of Life also has an interesting approach to streaks (it calls them "chains"). You can try to build the longest streak possible, but you can also set custom target streak lengths by tapping on Chains when setting up a journal. This means you can try to not drink soda for five days straight or meditate for three days in a row, and then take an allowed break. It's a much more realistic approach for many people, and is less likely to crush your motivation if you miss a day or two.

For iOS users, Strides offers a similar data-driven approach to habit building. However, its $4.99/month subscription kept it from topping the list. It's definitely still worth checking out. 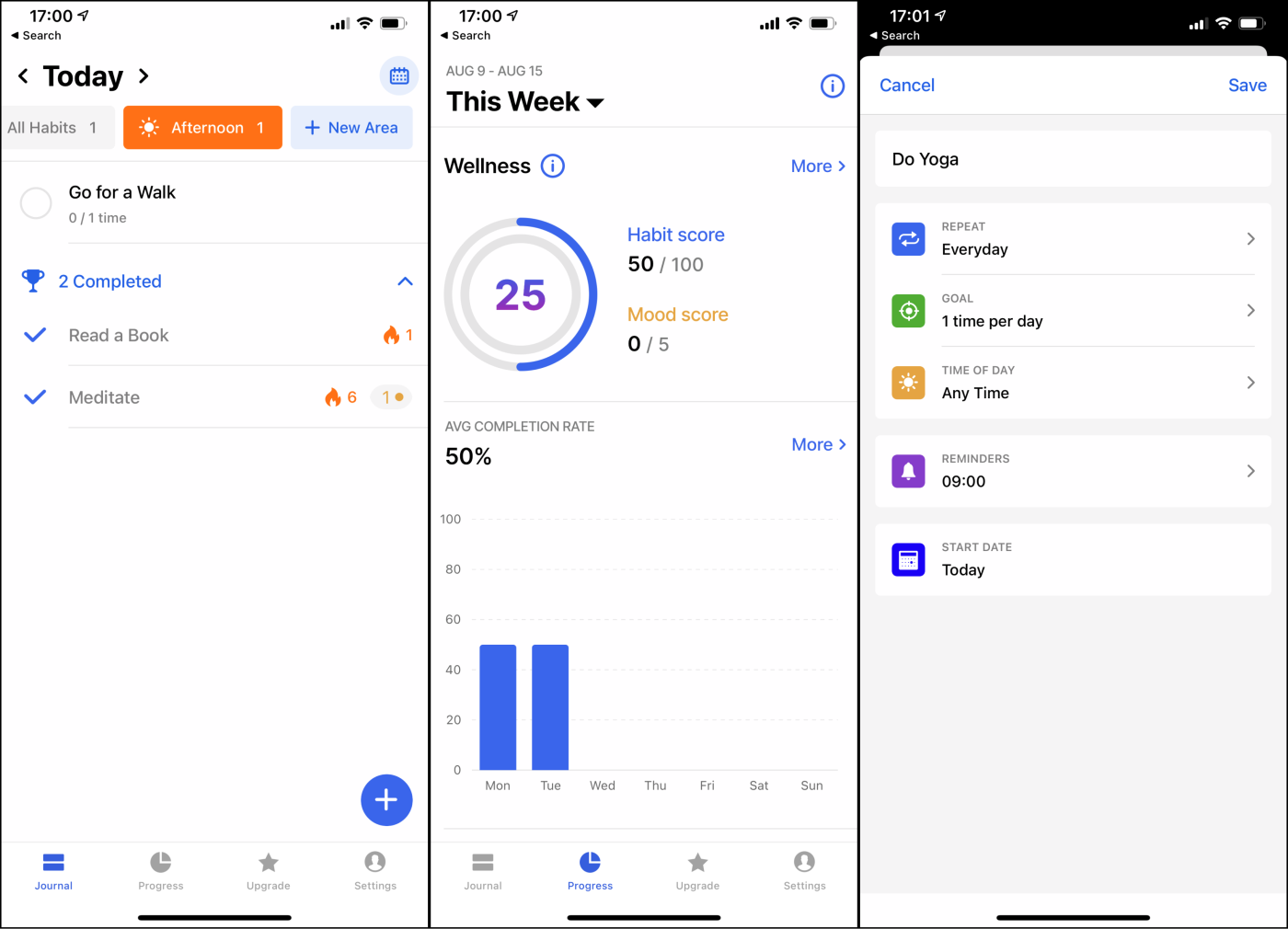 Habitify is one of the slickest habit tracking apps out there, and it's great that it's available on iOS, macOS, Android, and the web—but it is one of the few apps on this list that requires an ongoing subscription to get the most from it. If $5.99/month, $24.99/year, or $39.99 for lifetime access is going to be a dealbreaker, you're better off with one of the other apps.

If an ongoing subscription isn't an issue for you, Habitify has a lot to offer. One of its best features is the ability to sort your habits into habit areas. The defaults are Morning, Afternoon, and Evening, but you can also create your own. Tap the New Area button, and create something like "Mindfulness" or "In the Gym"; then you can assign new habits to them. This way, you can easily group related habits, so your screen isn't cluttered with all the things you're trying to keep on top of.

Habitify also enables you to attach to-do items to an "Action List" for each habit. If you need a reminder to grab your gym gear, for example, it's a handy feature. It can also track your mood (via emoji) and details about how your habits are going (via notes).

And, of course, Habitify has the usual streak tracking and data viewing features you'd expect from any good habit tracking app. You can see how you're doing in general, or drill into any specific habit, in the Progress tab.

Habitify Price: Free for 15 check-ins per week; from $5.99/month for Premium with unlimited habit check-ins, unlimited skips, data export, and other major features. 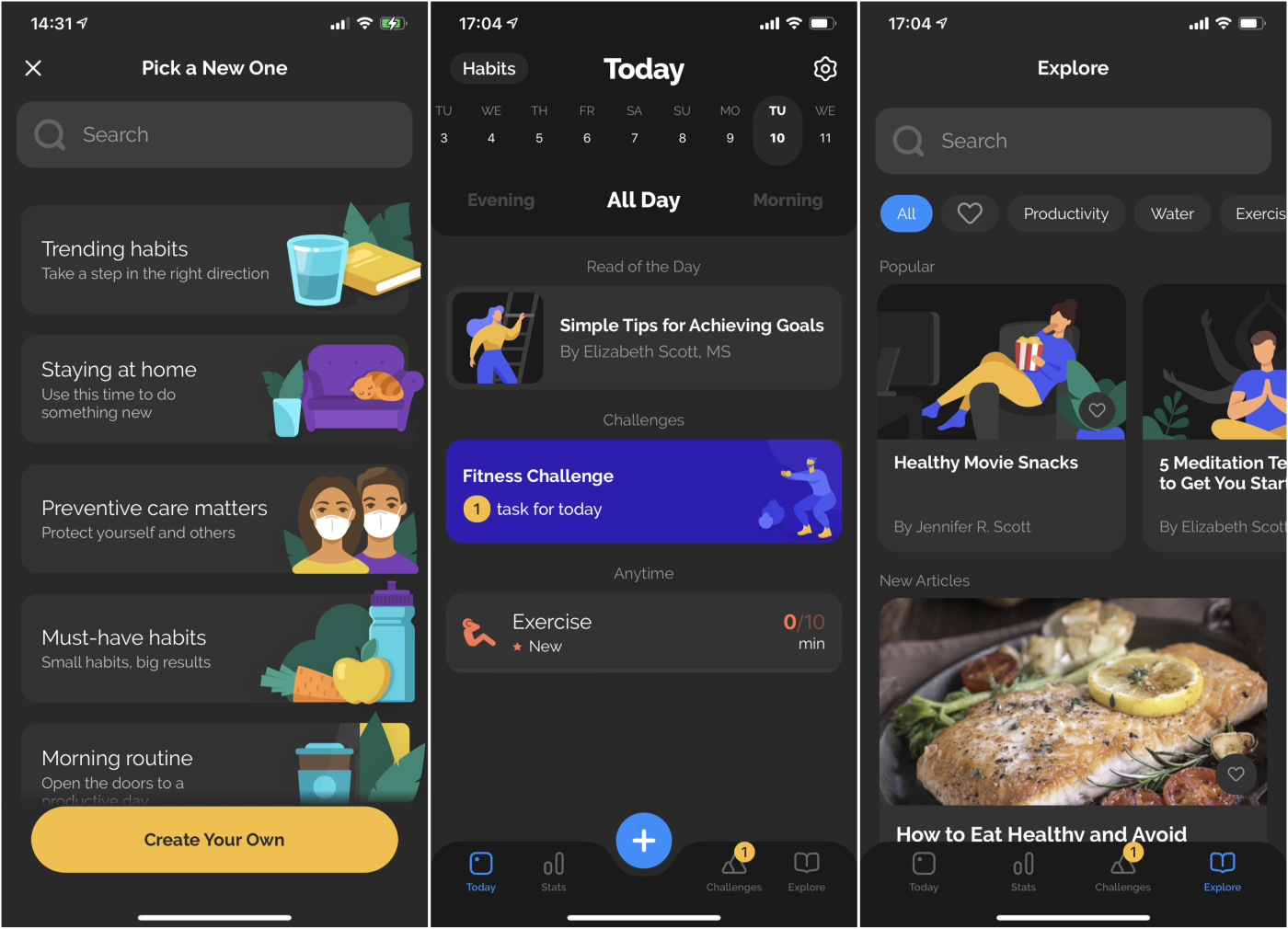 Productive is more than just a habit tracking app—it's also designed to give you the tools you need to build healthy habits in the first place.

When you sign up, you're asked if you often procrastinate, if you're easily distractible, and what you want to achieve with Productive. Depending on your answers, you'll receive different guidance.

Each day, you get a suggested Read of the Day that's relevant to building good habits. There's also the Explore tab filled with content about productivity and sticking to healthy habits. If you're ever struggling with a habit, you'll find help there.

Similarly, Productive does a lot of the hard work in setting up habits to track. When you tap the + icon to create a new one, you're assisted with a huge list of habit categories, with themes like Staying at Home, Preventative Care, and Morning Routine—there's even a Trending Habits section. You can of course create your own, setting how often you want it to repeat and when during the day you want to do it, but there's a good chance whatever habit you want to add is already there.

Productive also has built-in challenges with pre-determined activities. A fitness challenge might have you running in place on Tuesday, stretching on Wednesday, and doing some crunches on Thursday. When you sign up, you're forced to sign your name and promise to complete the challenge.

Like Habitify, Productive charges a subscription—in this case, $29.99/year after a 7-day free trial. It's pretty pricey for the included habit tracking and statistics, especially when compared to the likes of Streaks or Loop. But if you want the guidance and motivation of challenges, it's a great option.

Harry Guinness is a writer and photographer from Dublin, Ireland. His writing has appeared in the New York Times, Lifehacker, the Irish Examiner, and How-To Geek. His photos have been published on hundreds of sites—mostly without his permission.