The Scheduling Tips That Help Give Sight to the Blind

Noah Kates Rose didn't have a typical first day when he started as a Business Analyst at eSight Eyewear. "That day, I was watching a demonstration of this gentleman who came in with his wife holding his arm because he couldn't see. We get him in the chair, start the demonstration," Noah explains. "It was like night and day."

"He had tried [the electronic glasses] on once before by the time I met him. Because it was his second time wearing it, I was seeing a guy who realized the potential of it." Before eSight, this man only had his peripheral vision; he was unable to see details in his central vision, like the head of a screw. "He put [the eSight eyewear] on, immediately knelt down to the floor, pulled a screwdriver out of his belt, and started unscrewing our outlets and screwing it back in because he can't do that without eSight," Noah says. "It was unbelievable to watch, especially because it was my first day here."

He was just going around the room and unscrewing everything, screwing it back in, and talking to his wife about how much fun he was having.

eSight does something extraordinary: They help the visually impaired see again with the eSight 3, a head mounted display utilizing a high speed, HD camera, a custom vision profile, and user-based settings to bring sight back. 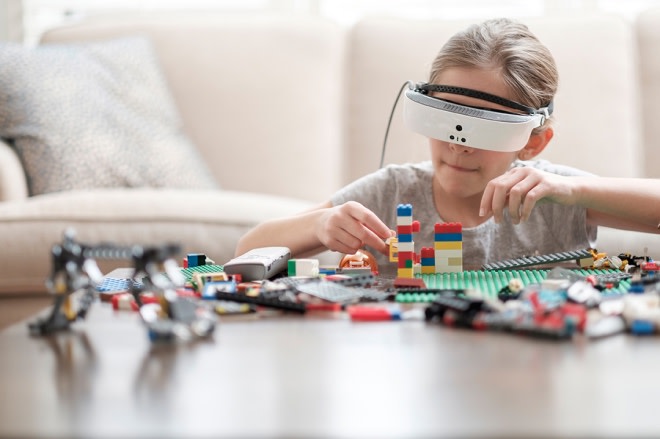 A child plays with Legos thanks to eSight.

According to the World Health Organization, 285 million people have visual impairments. About 14% of that number—39 million—are completely blind. Others have macular degeneration, which causes central vision to deteriorate, leaving only the periphery. Two of those people are eSight founder Conrad Lewis's sisters.

"[Conrad] tinkered away for many, many years until finally, he came up with something that worked," Noah says. "But it was pretty bulky, so he brought in this little team of engineers to create a much sleeker device." More than just vision, though, eSight is giving back careers, weddings, and most importantly, detail.

That makes eSight a popular device. eSight's cameras capture what the person looks at, feeds it to state-of-the-art algorithms that improve the feed, and then displays the video to the wearer. Its popularity means scheduling lots of in-person demos to show how the technology works. Before eSight started using app automation tool Zapier, each of their clients would spend at least 30 minutes responding to scheduling emails. eSight's Vision Advocates spent about an hour's worth of work per client—just on scheduling the first demonstration.

"There was the initial [call], a second one where we would book [the appointment], and a third and fourth reminder call. And often, another missed call in between because people have trouble with their phones," Noah explains.

Noah had to find a solution that would improve the scheduling experience:

"I found a company called Acuity Scheduling, which is an incredible scheduling software. Everything about it worked perfectly, we just needed it integrated into our Salesforce [workflow] so we could still do our own tracking and analytics. Using Zapier, we were able to connect them and it revolutionized the way we do demonstrations. 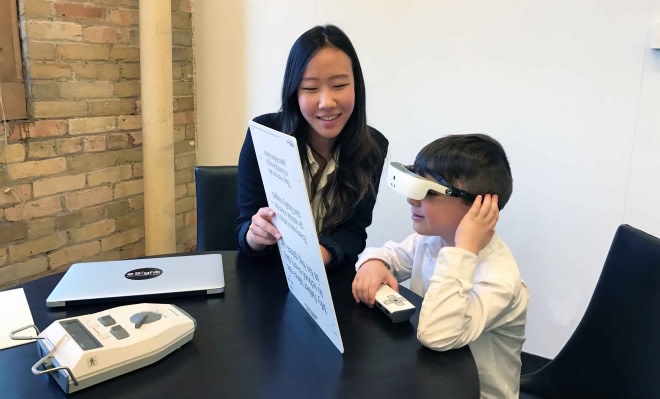 An eSight Vision Advocate during a demonstration.

Now, Zapier takes care of both scheduling appointments and tracking each customer's records. Instead of exporting the information from a new appointment and importing it into Salesforce to create a new record—or even worse, manually entering the details—Zapier will do it all. From pulling new appointment details to searching for or creating a customer record, Zapier does it automatically.

Noah added a step, too: In Acuity, you can create forms that your customer needs to answer when making an appointment. Zapier pulls the data from those forms into a Salesforce custom object specific to that customer (custom objects store information related to a customer).

If you want to try creating or searching for new customers in Salesforce when new appointments are scheduled in Acuity, give it a shot:

If you collect information when scheduling appointments and want Zapier to send the answers to Salesforce, try this multi-step Zap:

Once that initial appointment is held, Acuity can send out followup emails with different forms or questions to be filled out. Noah explains that those followup forms and questions help eSight development a vision profile, which customizes their eSight device.

Noah likes to keep Salesforce up to date on each of eSight's customers—whether they were able to see facial details, their reactions, what worked, and what didn't. "It became way more transparent for our clients," Noah says. Having the client fill out a quick, post-demo form means Zapier does all the work bringing information from Acuity to Salesforce.

If you find yourself constantly moving data from Acuity to Salesforce, updating custom objects individually, take a load off and let Zapier do it:

It sounds like a major project, it took me not even two days.

Depending on your job, you might have specific, easy-to-define goals you're expected to hit each day/week/month. But what happens when your job is a little more fluid? At eSight, Noah's role as Business Analyst has a main goal: Make the company better any way you can.

"My role is pretty much free reign, and it's the greatest job in the world because that's how I like to think. Whether that's the process, the tools we use, the office space we use, anything," he says. How do you measure making the company better? It starts with two Trello lists.

To keep track of someone's actual accomplishments and their project work, I figured it was absolutely dependent on combining a great app—Trello is a fantastic app—with Zapier's functionality to make it even better.

Noah combined two actions into one, simple Zap. First, using Schedule by Zapier, Noah has Zapier create a new Trello list every weekday at 8am. Once that's finished, a Zapier Filter step comes into play: If today is Monday, Zapier creates a list for completed tasks for that week. If it isn't Monday, the Zap stops, resetting itself for the next morning:

Bringing Efficiency to the Masses

Building efficiency into existing workflows—especially someone else's workflow—takes precision but oftentimes, blunt force. "I send emails out to the whole company sometimes just being like, you know, I don't want to make it sound too promo-y, but "Have you ever done something twice in the same day?"" Noah says. "When it's software related and it's manual entry work I definitely reach out to people, tell them that I'll build them this app to make their life easier."

Without Noah's clever workarounds and desire to always improve a process, eSight's clients would have a slower, less streamlined experience scheduling demos—and a harder time getting their eyesight back. "Really, that's my job here, to make the company run better. I make it my responsibility."

If you'd like to see eSight's great work in action, check out the Moments section of their site by clicking here.

What's your story? Tell us how you use Zapier to do more. You can also read even more customer stories and find new ways to improve your workflow.