5 remote work tips college students can use this year

Online classes have similar challenges as remote work. Here's how to conquer them.

It's likely that college life will largely take place remotely this year. I'm sure college students are trying to prepare, mentally, for that reality.

I'm not a college student and haven't been for a long time—I graduated in 2007. My college experiences are totally irrelevant in a modern context, and I never took a single online class. It's safe to say I have no idea what college students are going through right now.

What I do know about is working from home. I've made my living writing on the internet since 2009, and almost all of that time was spent sitting alone at my computer trying desperately to forget how fascinating the internet is so I could get work done. I suspect that's relatable.

I like to think I've learned a few things in a decade, and that some of it might be useful for students during These Challenging Times™. So here are a few strategies that have helped me succeed in remote work—hopefully they'll make virtual learning easier for you too.

No one is going to structure your days—do it yourself

Remote college means thinking about deep subjects via the internet—which is basically a giant distraction machine. If this is going to work, you need a plan.

I don't need to tell first-year students, or anyone else, that college is less structured than high school. Guidance counselors told you that so many times it became gibberish. It's like saying the word "hypothetical" to yourself, out loud, 500 times—at some point it loses all meaning.

But repetition doesn't make it any less true. So: college is less structured than high school. Professors assign projects to you well ahead of time, and it's up to you to figure out when to get things done. I was not the best at this. I stayed up until 6 a.m. writing papers more often than I'd like to admit, particularly in my first year.

Attending classes remotely amplifies this lack of structure because everything feels less tangible. You're not seeing your professor or classmates in person, which means you're not having those informal conversations before and after class about how things are going. You're going to feel a certain distance from what's happening, and it's easy to get lost without structure.

I know this because working from home is similar. My editor lives thousands of miles away, on the opposite coast, and she isn't a fan of micromanaging. It's up to me to get things done, and I've had to design my own system for doing so.

Here's what works for me: I get up early most mornings and plan my day. I'll look at my list of tasks, block out which hours I'll use to do what, then try to stick to that plan. At the end of the day, I review what I got done, then roughly outline what I'll do tomorrow. It works for me. It may or may not work for you. The main thing is that you need to have some kind of strategy.

I recommend doing some research and strategizing before the semester starts. We've outlined different scheduling methods, any of which could prove useful. You could look into time blocking apps—they're a great way to make a plan and (hopefully) stick to it. You should also think now about ways to avoid distractions.

Show up for office hours

Whether or not you went to office hours when you were on campus (I certainly didn't), go to virtual office hours. You won't be able to pass your professor on your way out of class to ask a quick question, or even just to say thanks. And one thing I've learned from remote work is: face time matters.

It's easy to fall into Slack-only interactions or muting yourself in every big team meeting. But at my company, we go out of our way to have face-to-face video calls—weekly 1:1s with our manager, monthly skip-level meetings with our manager's manager, and small team meetings with our department lead. If I didn't go to those meetings, I'd miss out on valuable guidance, and I'd be a cog in a machine with no room for professional growth.

Plus, professors get lonely. 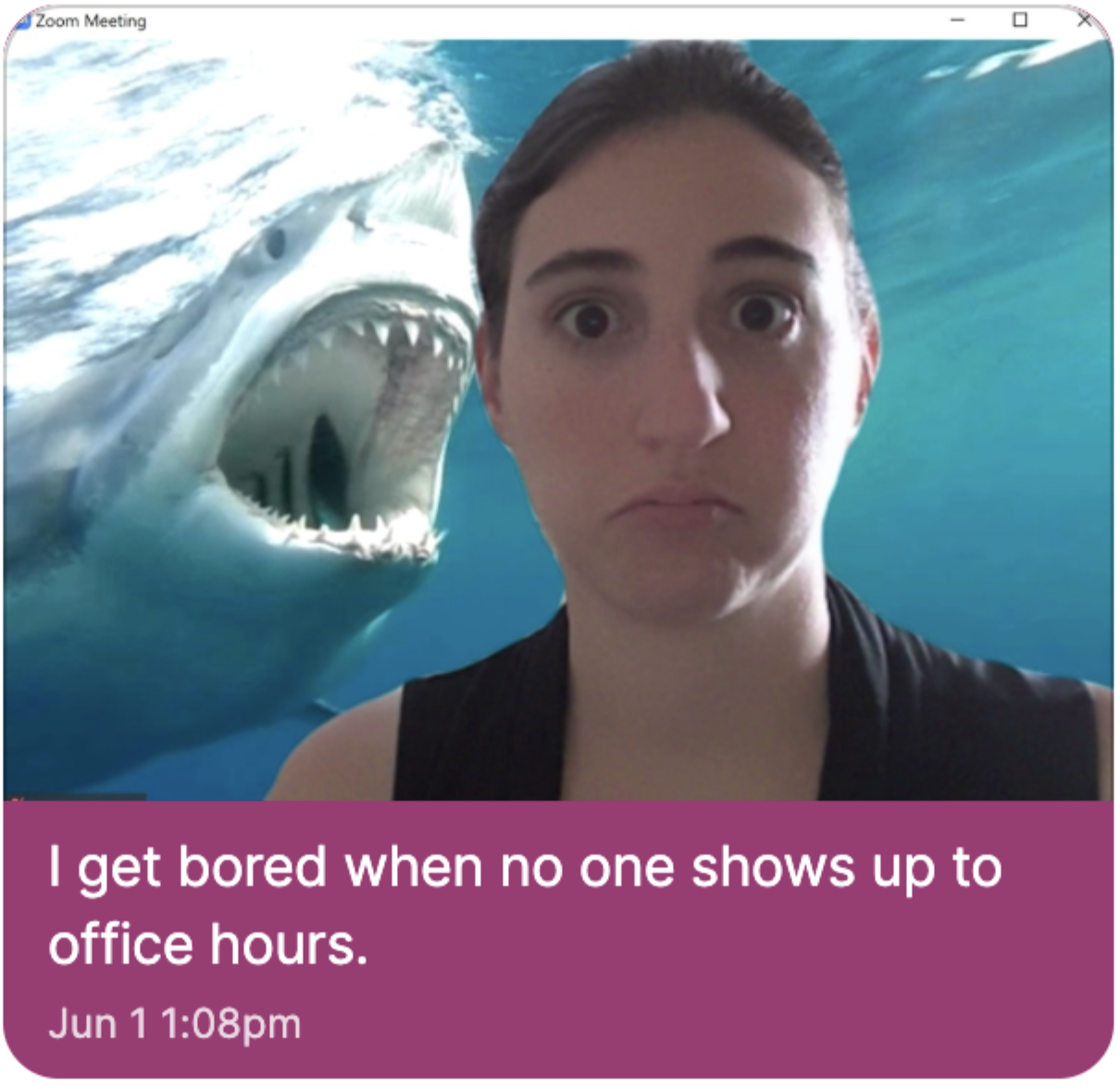 An actual text message from my friend who

I attend a lot of Zoom meetings, and they can be rough. A lot of this is because of the lag, which messes with the natural human ability to sense when someone is done talking. There's also the constant technical interrup.....hello? Can you hear me? Ok, good, I can hear you now. All of this combined makes video chats a distorted, kafkaesque reflection of actual in-person interaction.

There are two ways you can react to this: you can avoid asking questions in class altogether, or you can steer directly into the awkward situation and make the most of it. My advice: lean into the weird. Relish it. Joke about how odd it all is, if you think that will land. Then ask what you want to ask.

I'm a writer, and I only recently started working in marketing. There's a lot I don't know. That means I'm frequently in meetings with a lot of words and terminologies I don't understand. It's intimidating, in that context, to interrupt and ask questions, but I've learned that I need to do it in order to learn. In person, this is fairly simple: I wait for an opportune moment, then ask. Remotely, it's more complicated because of the lag. Occasionally it means I'm talking over someone, saying things like "sorry, you go first," and generally feeling weird. Sometimes I get around this by asking my question in the chat, or using Zoom's "Raise hand" feature.

How you'll navigate this is going to depend on context. Just don't let the weirdness of video conferencing keep you from asking questions—push through the awkward and make it work.

Proceed with caution. Asking questions is good. Being the only person to ask questions isn't. In college, and in professional settings, there are people who dominate conversations. Balance your need to learn with respect for your professor and the other students.

In theory I double majored in Communications and International Relations, but if I'm honest, procrastination was my primary focus. I made it through—the trick was to procrastinate on one thing by working on another.

It would be nice if you always wanted to work on exactly the most productive thing to be working on, but that's never going to be the case. You need to realize that about yourself and learn to channel that energy into something else.

For example: sometimes I should be writing but can't make myself start. My solution is to spend time researching the next day's article, because that takes up a lot less energy. You could use a similar approach—if studying is too much, spend some time on a shorter assignment, or even doing some cleaning. It helps.

I've talked a lot about getting things done here, but life is about more than work, or studying. I've worked from home long enough to know that it's way too easy to work constantly. But you shouldn't work more when you work from home because it's a quick path to burning out.

I imagine it's going to be similar for college students, who won't have access to the diversions of dorm life. Hanging out at home with your family might not be that much more interesting than studying, so your inclination might be to study constantly. Please don't do that.

Studying constantly leads to burnout, which isn't going to help you learn. Make sure that you're scheduling time to do something else, particularly things that involve talking to other people. I recommend putting those things on your calendar to make sure you actually do them.

You need other people. We all do. Don't let this distance cut you off from them entirely.

Photo by Nathan Dumlao on Unsplash.