Newly remote companies are turning to Pizzatime for team building

In mid-2017, Josh Gross decided he wanted to throw a pizza party for his team. The catch: his company, digital product agency Planetary, is a completely distributed team. So he needed to figure out how to get pizzas to Romania, India, and around the corner in Brooklyn.

He wasn't sure if it was possible, but he gave it a try. After half a day of research, he figured out how to place orders in six different countries. And the next day, he and his team had a virtual pizza party. "It was such a collectively entertaining activity because of the novelty of it," he told us. "Sharing that experience even though we were so spread out was a nice change of pace."

They did it a couple more times, and eventually, Josh decided to see if other teams might want to join the fun. In July 2019, Planetary launched Pizzatime, a service that would organize virtual pizza parties for distributed teams. They had a few bites, with companies like Animalz, Product Hunt, and Customer.io getting in on the action. But after a handful of orders—one a week at best—they called it quits. They shuttered Pizzatime on December 31 due to low demand.

So Planetary chalked it up to a fun experiment and moved on.

Building a product with no code

Let's back up a bit. Pizzatime wasn't the first product that Planetary had launched. In 2018, they created Spacetime, a Slack app that helps distributed teams schedule meetings across time zones without having to do time zone math.

"We do these projects from time to time because it gives our team the opportunity to test out new approaches and interesting ways of experimenting with tools," Josh told us. "It ends up helping us with client projects because we take what we learned and bring it back to our core work."

But while these products serve as light marketing and skill-building for Planetary, they're still side projects. And that means they need to be low-effort. Josh started by drawing out a flowchart of how Pizzatime would work. The three main parts to the flow: customers would fill out a form with their order, orders would be stored in a database, and his team would be notified whenever an order was placed. There wasn't one tool that could do all the things he wanted, so he turned to Zapier, an automation tool that can connect apps to create workflows like the one he was hoping to accomplish. "I wanted it to be as non-technical as possible," says Josh. "Zapier allowed us to accomplish the workflow without writing any code."

They built the Pizzatime site in website builder Webflow, which links to a Typeform form—that's how they accept the pizza orders. When someone submits a typeform, Zapier then automatically sends the information over to Airtable, the database where Josh and his team keep the orders. Zapier also pushes a channel message to Slack. 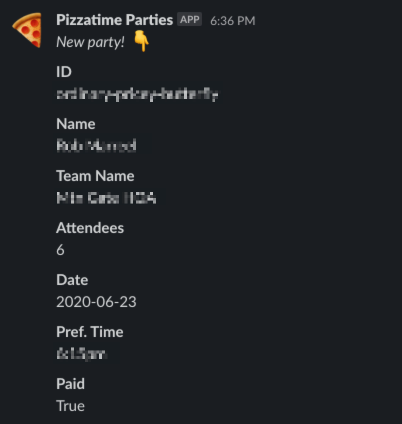 The team's pizza assistants see the order come in and can start figuring out how to order pizzas to a variety of remote locations.

Here are the automated workflows—called Zaps—that Josh set up with Zapier. Click any of the buttons to customize them. Zapier connects to thousands of apps, so you can set up similar workflows for whatever apps you use.

So what does a manager do when their whole team is suddenly remote? They turn to experiences they know.

In March of 2020, Josh's team started getting emails asking where Pizzatime went. They put the service back up, assuming they'd do a couple more parties. But a couple quickly turned into multiple parties a day.

"Suddenly, teams that have never been remote were completely remote. And they were panicking," says Josh. "How do you build team culture remotely? They had no game plan. No experience to rely on." They got orders from all kinds of organizations: law firms, universities, and even large companies like Amazon and GE. 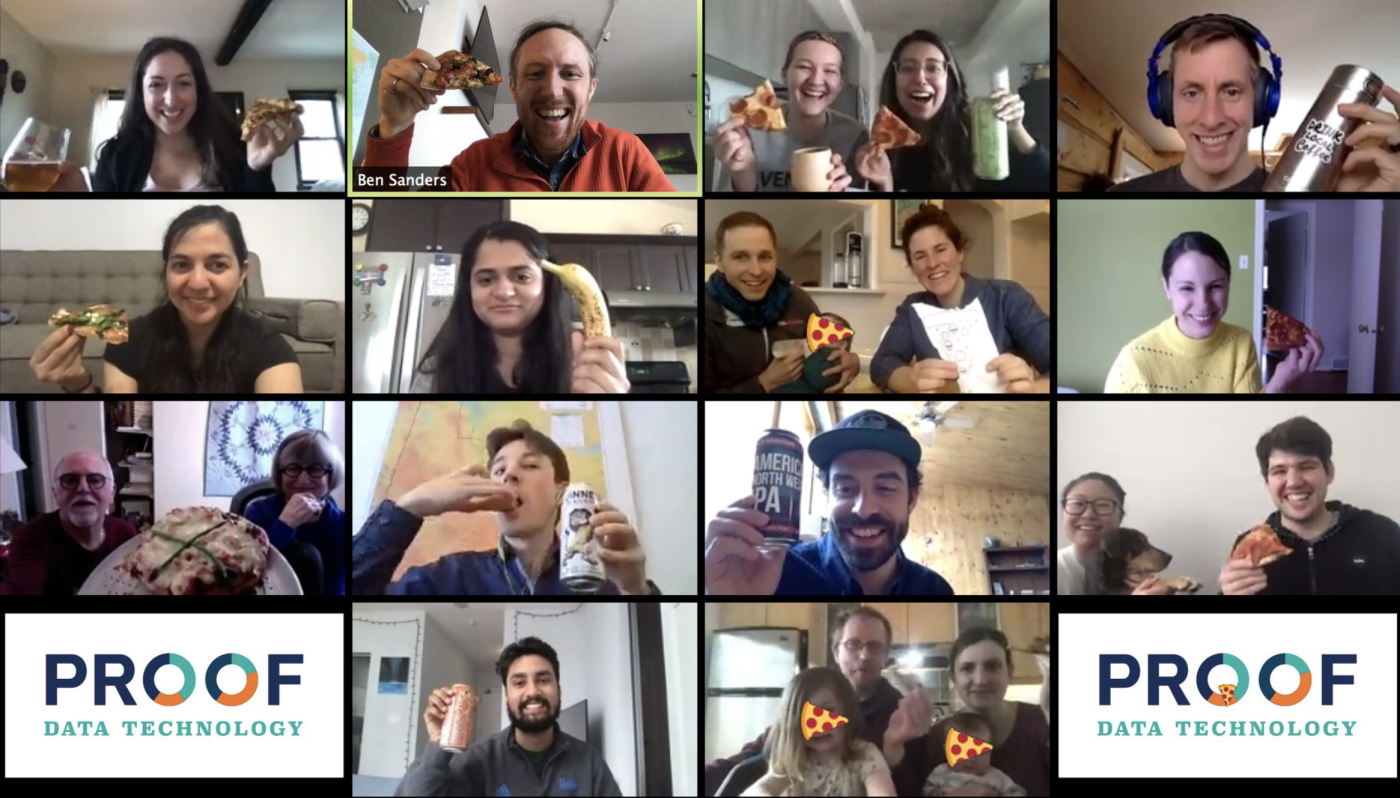 "Hundreds of thousands of companies have been thrown into the deep end with no swimmies," he says. "So what does a manager do when their whole team is suddenly remote? They turn to experiences they know." Employers couldn't do regular office catering, so they turned to Google and found Pizzatime. Since March, every order that's been placed has been from a previously co-located team. They've been averaging close to 20 parties a week. 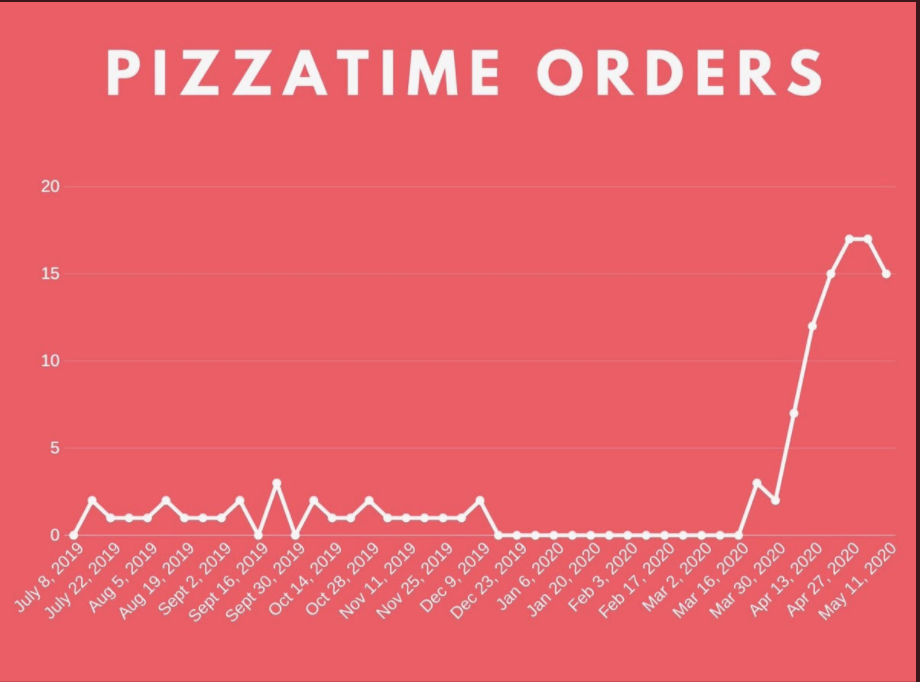 This graph shows the number of Pizzatime orders since launch. The weeks of no orders in January through March were when it was closed.

Let's be clear: Pizzatime isn't a lucrative undertaking. Josh and his team never intended to make a ton of money off it. "For a while, we were straight-up losing money," he says. "I was basically paying for people's pizza out of pocket." It was part-marketing, part-remote camaraderie. But Josh plans to keep it going for as long as people continue ordering.

Pizzatime is a good example of how the market is changing: services that weren't on many people's radar are now a core need. But it's also a reminder that, as Josh puts it, "People, whether they're together or apart, still have the same core desires: camaraderie, good food, good people."

Planetary{: rel="follow" } is a digital product studio that works with clients worldwide to develop creative mobile and web solutions to key business problems. What's your story? Tell us how you use Zapier to do more. You can also read even more customer stories and find new ways to improve your workflow and productivity.