Why knowledge sharing benefits everyone

I thought I understood geometry. Then I tried to teach it. The 14-year-old I was supposedly instructing rolled their eyes and asked, "Can you just ask the real teacher to explain it?"

My first "real" job was as a teaching assistant in a secondary school. I wasn't prepared for the reality that knowing something is not the same as being able to teach that thing to someone else. There were plenty of topics that I understood myself but struggled to explain to the students.

After the withering look I received in the math lesson, I took some time to study the fundamentals of the subject, the theory behind the practice. The next day, I could explain the topic in a way that the students could understand. During that lesson, I received a small huff instead of an eye roll, which is basically a high five when you're teaching teenagers.

This experience hammered home the old adage (Ancient Rome old): "by teaching, we learn." Taking the time to share what we know with other people helps us as much as it helps them.

Looking for advice and inspiration about using Zapier? Post your questions, share your knowledge, and learn about how others use automation in the Zapier Community.

I studied martial arts for a number of years. As I was moving from beginner to novice, I was explaining how to do a particular throw to a new student—and I had him try it out on me.

As I flew through the air on my way to landing painfully on my shoulder, I had a moment to contemplate what had gone wrong. In my mind, I'd done a pretty good job of explaining how to properly execute the throw, but I'd missed some of the key points: I was only telling them what I remembered about the throw, not the whole technique. As a result, the throw was awkward and my fall was less than graceful.

You might think, you hit the mat, Danvers, so clearly it worked, but the move had only succeeded because this particular student had a foot in height and 20 pounds on me. As soon as he tried it on someone his own size, his opponent didn't move an inch.

As I mournfully nursed my shoulder, our teacher explained the throw again, and I realized that I'd missed the fundamentals of the footwork and balance of the throw and had focused instead on the more obvious points.

The lesson: if you don't fully understand something, you will struggle to teach it properly.

As with my geometry lesson, I could only explain concepts behind the subject after I'd gained a deeper understanding of it. Sharing knowledge with other people forces you to think more deeply about a subject, to examine it and make sure you really nail the fundamentals.

A study published in Memory & Cognition found that when studying information in order to teach it later, you learn it more effectively. Why? Because you'll organize the material in helpful ways and seek out key pieces of information.

When I started at Zapier, I had no idea what line items were or how to use them in Zaps, which is what we call the workflows our customers use to connect and automate apps. I used to dread emails from customers asking about line items, because I didn't know myself. A fellow Customer Champion encouraged me to set aside some time to learn, to have a play with some test Zaps, so I could wrap my head around line items. I set up fake invoices in accounting apps and used them to make payments in other ones; I passed information from eCommerce apps to Google Sheets and back again.

Eventually, I was downright excited when I got a line item question in a user email: I knew exactly what the issue was and could clearly explain how to fix it. 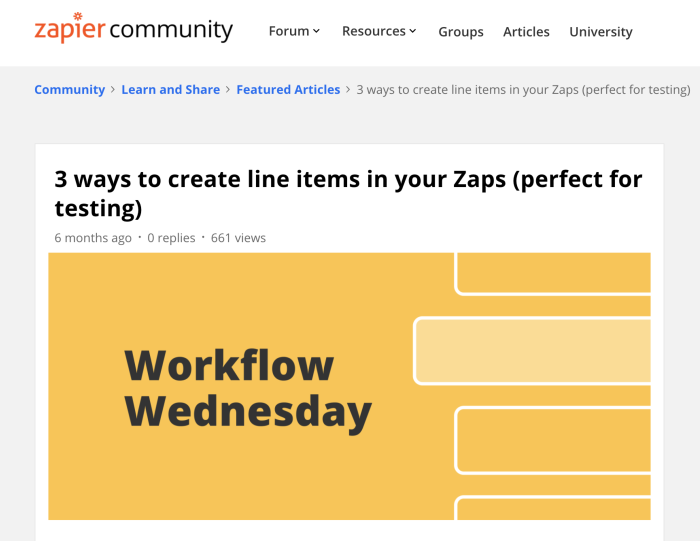 While learning about line items, I knew that I wasn't just learning for my own benefit—I would need to explain these concepts to our users. I took notes, I paid attention to common errors, and I tested my knowledge with the apps that I knew users most often used.

And even though I don't work on the frontlines of support, I can still spot the difference between a regular and nested line item at 100 feet, which, as you can imagine, is a great party trick.

One of my favorite automations is one that my colleague Tyler made (he knows a thing or two about building automations with spreadsheets). This particular automation generates Leslie Knope-style compliments by selecting random adjectives and an animal from rows in Google Sheets.

Using Zapier and Slack, I can type one word to tell someone that they are a "smart, effervescent porpoise" or a "shining, pure-hearted unicorn." I've since taken this concept and used to make a few automations of my own (though none will top the Knope bot).

This type of automation using Zapier is great for light-hearted randomizing (I use it to send myself silly GIFs every day), but it can also be useful for things like choosing sweepstakes winners and randomly assigning leads in a CRM. Because it's a handy workflow, I wrote an article for the Zapier Community about how to set one up. 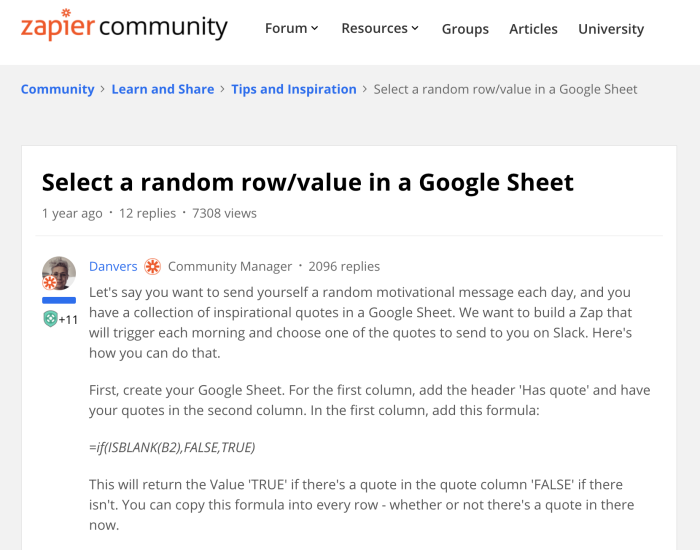 I have a couple of different Zaps that use this technique, so I was confident that I knew the best way to set it up. But in writing down the step-by-step process of creating the workflow, I realized that I had added an entirely unnecessary step and that there was a more efficient way of achieving the same thing.

Sharing my knowledge with the Community gave me the opportunity to examine the approach I had been taking and find a more effective one.

Here at Zapier, I work in the Community, a place where Zapier users can answer each other's questions. I really love seeing Zapier users level up their own knowledge by helping others—and I sincerely think it's the best way to learn. If you'd like to get involved, come and join us in the Zapier Community!

Alex Danvers (who goes by Danvers because it sounds cooler) is a Community Manager at Zapier based in Nottingham, UK. Outside of work, they enjoy playing Dungeons and Dragons and has strong words for anyone who says that Bards are an inferior class choice.