When you work on a small team, odds are high that you have multiple responsibilities. Some of those tasks are probably shared, too, or jump department lines. Today might be a marketing project but tomorrow might have more of a sales or support slant to it. Maybe it's a project with an engineer to create a better tool or integrate a platform into your workflow.

But with a smaller team that shares responsibilities, you have to ensure that tasks and projects aren't being repeated accidentally. Customer.io, an app engagement platform that helps marketing and growth teams automate messages to their customers—from lifecycle emails to SMS—took this challenge head on and found their way forward: Collaboration.

"As a small team, it's imperative we work together, otherwise the multiple hats we wear can accidentally result in redundancy," says Bill Miksich, Director of Demand Generation. More than just a time killer, duplicate work mucks up CRMs and throws off analytics. 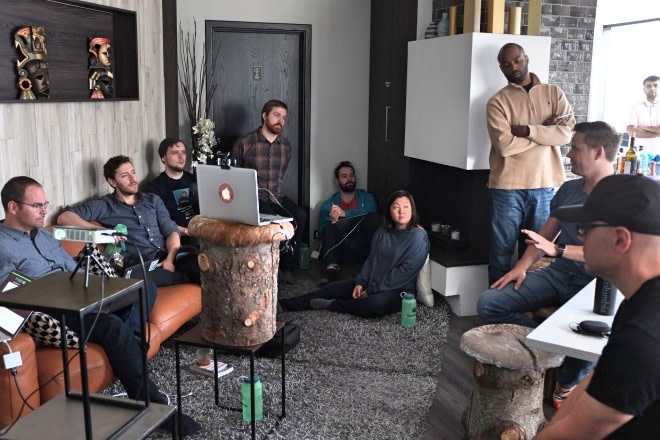 The Customer.io team at one of their company-wide retreats.

Looking to eliminate duplicate work and free the Customer.io team from manual tasks, Bill needed a way to manage the multiple apps used across the different departments and a way to continue fostering collaboration.

He turned to app automation tool Zapier for Teams and its Shared Folders. Now, nearly every member at Customer.io builds their own Zaps—automated workflows that bridge two or more apps—and can share them with their teammates.

Customer.io relies on several different applications for their day-to-day sales, marketing, and people ops tasks: Slack, Livestorm, Clearbit, Close.io, FormKeep, and Customer.io, just to name a handful (or two). Bill faced a problem every company with multiple apps encounters: How do you standardize data in different formats?

With Zapier's homegrown tools, Formatter and Webhooks. Webhooks make sending data simple while Formatter can transform and split text, to name just a few of its abilities. Paired with Customer.io's business apps, Formatter and Webhooks provide each team with the flexibility they need to standardize information. "Every inbound channel has a set of tasks in their Zap to normalize, enrich, and ultimately route the data where we need it."

We'll dig in to three of Customer.io's departments—sales, marketing, and people ops—and explore the workflows they built to increase productivity.

Lead assignment can be tricky: You don't want to play favorites, every sales rep needs a steady flow of leads, and some folks just work faster than others. Customer.io's solution? Automated round-robin lead assignment.

When leads come through Close.io, Formatter by Zapier comes in. With Formatter's Utilities action, Zapier picks at random from a list of sales reps. Zapier updates the lead in Close.io with the new owner and in the last step, creates an event in Customer.io. Events in Customer.io store data and create a full picture for that lead.

The Formatter tool is one of Zapier's best weapons in the fight against manual work. With Formatter, Close.io, and Customer.io, lead assignment becomes fair and automatic.

Assign leads in Close and create events in Customer.io

Standardize Form Entries for Data Analysis with Formatter and Webhooks

Everyone has a particular online writing style, some in all lowercase, some with proper punctuation, and others in all caps with no punctuation It's annoying in emails and online comments, but when you try to analyze form responses from customers, random formatting can be more than just an eyesore.

To clean up customer entries from FormKeep, Bill created a Zap with three Formatter steps, all utilizing"Text" actions to clean up formatting. Since FormKeep has a single field for name, Bill uses the first two Formatter steps to split the single name field into first name and last names, separating the names by the space between them (watch this video to see exactly how to do this).

Once the name is split, Zapier runs a third Formatter step that transforms the input email address into all lowercase. Once this completes, the data flows into Zapier's Webhooks integration. Simply put, webhooks are a custom way to integrate your app by sending text to a unique URL and can be immensely powerful once you know how to use them. Customer.io uses webhooks to send their newly standardized form data to Segment, an analytics API and customer data platform, where it will be analyzed and used for reporting.

By using this model, we can almost always use one Zap per channel to handle all the inbound traffic coming from each point solution.

Zapier then finds or creates a lead in Close.io, and creates a task for the lead owner (which was assigned ahead of time by the round-robin sales Zap in the previous section).

We'll separate this Zap into a few of its key components so you can customize it for your workflow as needed:

Create or update customers in Customer.io from FormKeep submissions

Create leads on Close for new submissions on FormKeep

Format FormKeep responses and send data through Webhooks by Zapier

Now, Customer.io's marketing reporting and analytics is clean and uniform. "If we didn't have [this Zap], we would have no way of standardizing or normalizing inbound data before it makes its way into our systems of record," says Bill.

Create Reminders and Send Notifications in Slack from New Emails

It's easy to find yourself inundated with emails, forgetting to follow-up in a timely manner. If you're on a hiring team, quintuple that statement. The people ops team at Customer.io created a simple fix not only for follow-up, but also for visibility: Use Zapier to send Slack messages and make reminders from new hiring emails.

When someone applies at Customer.io, their application comes into Gmail with a specific subject. Based on the subject line, the people ops team has Zapier send a specific team a message in Slack, and then create a 48 hour reminder to follow-up.

"Keeping the channel aware of new candidates kept us all accountable, and gave a space to talk about each application outside of our applicant tracking system in a tool we all were in every day," explains Customer.io's Head of People Ops, Rachel Baskerville. "When I needed to remind the hiring team to review applications, I could easily link to them in chat, where they could all respond in the same thread."

Shared responsibility plays a large role in Customer.io's use of Zapier for Teams. "Zapier makes it easy to trace the business and human logic back to a goal, so if there's ever a question about why something works a certain way, it's easy to point to the Zap and have them pick up what's going on," Bill says.

More than just creating new workflows, the Customer.io team looks after each other's Zaps: "I think everyone should share ownership and understand how the sausage gets made," Bill says. At Customer.io, sharing is caring.

All images courtesy of Customer.io.

Read more about Zapier for Teams and learn how other companies collaborate with automation, Shared Folders, and more. Do you have a Zapier success story? Share it with us.