4 Common Problems Caused by Collaboration (and How to Fix Them)

4 Common Problems Caused by Collaboration (and How to Fix Them)

"Collaboration" is a hot word in the business world. Our software is collaborative. Our open office plans are designed to encourage communication and collaboration, for better or worse. Even job ads show a growing desire for workers who have experience collaborating. Who doesn't want to be seen as a team player? In the push to become more collaborative, however, organizations may focus on the potential benefits without considering the risks.

Experts and researchers in business management have found that collaboration isn't always all it's cracked up to be. Here are four common problems caused by collaborative work environments, followed by suggestions for how to correct them and keep teams productive.

The more people collaborate, they less time they have for individual work. The hardest work that knowledge workers do in their jobs usually requires intense focus, and that in turn means they typically do it alone.

When we collaborate, whether by attending meetings, answering questions, sharing opinions, or simply swapping work back and forth with other colleagues, we need to interact, and interactions are often disruptions to long periods of intense focus.

Within a collaborative environment, people don't contribute evenly. A study across 300 organizations showed that a handful of employees are disproportionately responsible for positive results: "20 to 35 percent of value-added collaborations come from only 3 to 5 percent of employees." Why it happens is anyone's guess, but it's a pattern to be sure.

The lopsidedness shows up in gender, too, with women finding they must be seen as helpful contributors, something they can achieve by saying yes to collaboration. In a study, when both men and women stayed late to help colleagues, men were rated higher for it than women. And when both men and women declined to stay late and help others, women were rated lower for it than men. So, it's possible that women feel obligated to be collaborative more than they might like, seeing as their reputations depend on it.

When organizational values give too much weight to collaboration, two common problems result:

First, it creates an always-on culture, where employees feel the need to respond to messages after hours and on days off.

Second, people feel pressured to say yes to every collaborative effort that comes their way. Because collaborative environments tend to be lopsided, the highest contributors end up getting the most calls to participate, whether it's giving feedback, sharing institutional knowledge, attending meetings, or approving decisions. When the highest valued individuals feel pressured to say yes to every request, and they are bombarded with them, burnout isn't far off.

Building on the idea that small numbers of people disproportionately contribute to collaborative efforts, and that they are over-taxed with requests, bottlenecks develop and work stalls. When everyone in the organization relies too much on the contributions of a small group of people, then work can't move forward until those highly valued employees weigh in.

How to Encourage Collaboration And Avoid Its Pitfalls

Reduce the Number of Interactions Required

If you were to map out the collaborative process of getting work done, where work passes from one person to the next, or in the case of an approval process, directly back to the previous person, it might look like this: 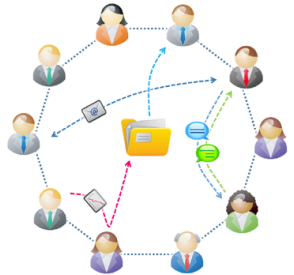 Organizations that simplify the operating model or better align the organization (in the words of Michael Mankin, a partner at the consulting firm Bain & Company and author of Time, Talent, Energy) effectively reduce the number of interactions.

For example, by flattening structures, fewer executives and managers end up weighing in on decisions, which reduces the number of people and interactions involved in a collaborative effort. It also empowers appropriate people to default to action and make decisions that help the organization move forward.

Set boundaries so that people can protect their time and energy appropriately. Cutting down on the number of meetings held and their length can make a tremendous difference. Some experts suggest setting a limit on the number of hours per week anyone is allowed to sit in meetings. Another tactic is to create a culture in which certain stakeholders can choose not to attend every meeting in full, but rather join only for the part that pertains to them.

Equally important are cultural norms about replying to messages after hours. Replying to messages off hours may seem helpful in the moment, but it can contribute to a damaging culture that causes burnout. Team members should be available to other colleagues during work hours, but it shouldn't be expected on their time off. Employees in leadership and management roles are in a position to set the tone here.

Shift the burden of making decisions from only top performers or managers to other people in the organization. People often become bottlenecks because they're in high demand, not because the work requires it.

Find your bottlenecks and tally up all the work that requires their approval or feedback. Of that work, what could be done by someone else, perhaps someone lower in the organizational structure? Spreading out the powers of decision-making removes bottlenecks and lightens the load on the high performers who unintentionally create them.

Balanced organizational cultures reward both individual contributions and teamwork. But most cultures aren't all that balanced. The tendency is to formally reward individual achievement but informally reward collaboration. The salesperson with the most sales might get an award and a bonus, but the person who shares knowledge and gives feedback merely earns a reputation for being helpful. It takes concerted effort to change a reward system so that it praises people who balance individual achievement and collaborative contributions. Yet, it can be done.

A successful example comes from glass and materials company Corning (as described in this video webinar by Wharton School professor Adam Grant; start at 16:05). According to Grant, Corning has a prestigious fellows program that rewards employees with a job for life and a lab for life if they meet two criteria. One is being the lead author on a patent that brings in a tremendous amount of money. The other is being a consistent contributor to patents authored by other scientists and engineers. Doing one or the other isn't enough. You can only receive this incredible reward if you do both.

Collaboration has plenty of benefits. When people work together, it provides an opportunity to have a more diverse mindset for how to create new products or processes, and the collective wisdom of a group likely outweighs the ideas and knowledge of an individual. Researchers are finding, however, that collaborative cultures tend to create a few common problems as well. By knowing what these problems are and having a few strategies on hand to prevent them, you can keep your team productive.

Title photo by rawpixel on Unsplash