Today we're excited to announce that Zapier now supports more than 100 public applications on the platform. That's making no mention of the hundreds of other apps used privately on the developer platform.

Today Zapier automates millions of tasks every month and helps thousands of people all over the world. That's with just a tiny portion of all the major applications used for business around the world supported. 116 to be precise. But working efficiently is hard. And there's still a huge demand for helping you connect the tools you use everyday.

To help you understand where we are going I thought it'd be interesting to show where we've been. 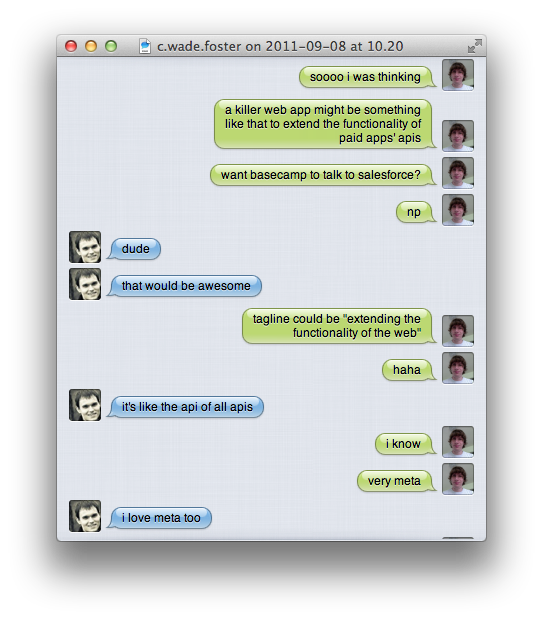 As my co-founder Bryan and I tend to do, on September 8th of 2011, we found ourself chatting ideas back and forth during our day gigs. And thus the original idea for Zapier was born. A way to connect paid services.

From September 30th to October 2nd we took the idea to Startup Weekend in our home town of Columbia, Missouri. The original name from Bryan? API Mixer. (Yeah, he doesn't have naming privileges anymore).

The funny thing about Startup Weekend is the participants pick the ideas and the top 10 or so ideas get selected. API Mixer was dangerously close to not getting picked but the voting happened with sticky notes. Luckily we found an extra pack of sticky notes and like any good startup founders would do, we made sure API Mixer participated in the weekend. 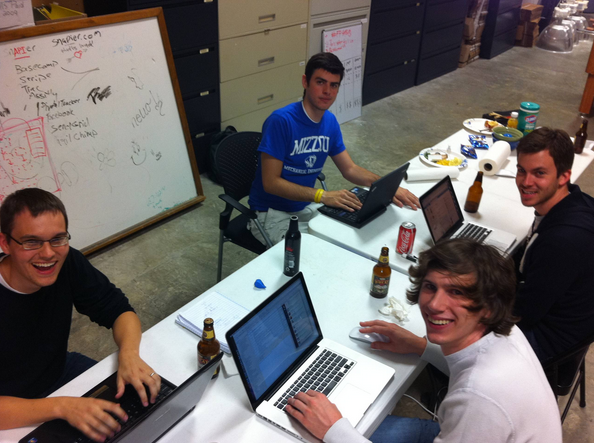 By Sunday night with a nearly failed demo, Zapier was the winner of the first Startup Weekend in Columbia, Missouri. And by mid-week we'd setup an LLC and were already talking to some of you about how your work can be done more efficiently.

November 2011 - Bootstrapping Our Way to Our Sale

Being born and raised in the Midwest definitely instills in you certain life lessons. Phrases like "A penny saved is a penny earned" and "Pulling yourself up by your own bootstraps" aren't just silly colloquialisms, but a real way of life.

So for us, we knew growing Zapier in a way that could help customers over the long haul meant that at the end of the day we needed to be making more money than we were spending. Basic finance 101.

That's why on November 30, 2011 we were beyond stoked to sell our first Zapier beta invite to Andrew Warner for $100. And by a week later we'd sold a dozen more. That's when we really knew that we were building something that could really help a lot of people. 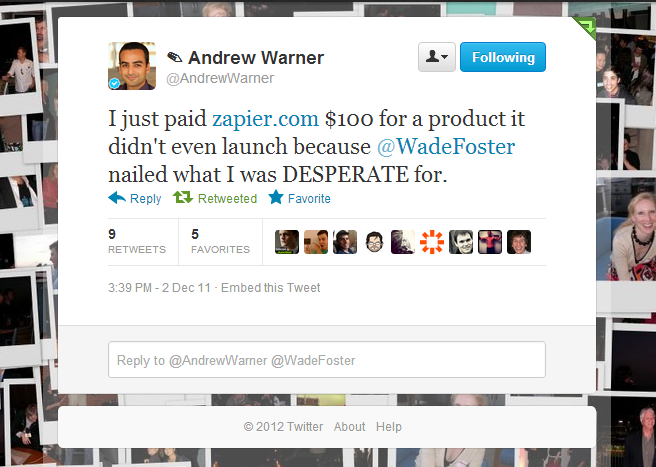 Knowing when to take the leap from nights and weekends to full time is something a lot of entrepreneurs struggle with. For some it's easy, but for some it's really hard. Even Mark Zuckerberg never intended to dropout of college.

By January we were gaining enough traction that it was clear someone needed to go full time on Zapier to help with support. With a helpful nudge from my then boss and after some long night discussions with my wife and family I went full time on Zapier at the beginning of January.

Zapier for several months had been one of the main things in my life. Outside of my wife and family, it was now the only thing.

It wasn't too much longer that Bryan and Mike both followed suite. 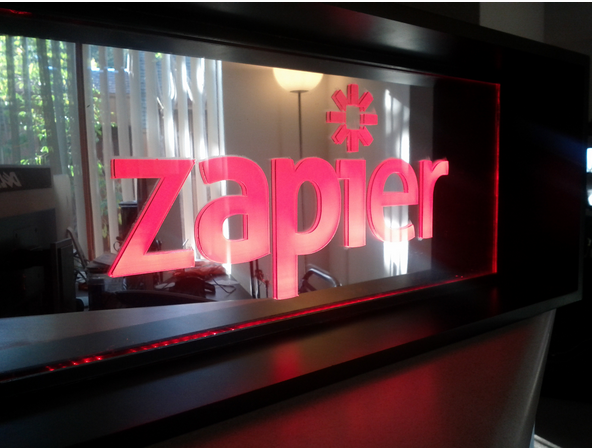 Figuring out the right thing to build and the things customers care about is always challenging. By March we'd heard loud and clear from our beta customers. Custom fields, filters, a better UI, and a never ending suggestion of new apps were things we heard all day long.

We experimented with pricing by charing $1, $5, $100, whatever for access to the beta. What dollar amount attracted customers that cared? What users needed the most support? What apps attracted the highest quality customers?

Each day we found ourselves pushing some small piece of the product forward. Never with overnight success, but we tried to make one small thing better everyday in hopes that lots of small improvements would add up over time.

But on April 2nd we broke the mold and made a big change; we launched a brand new interface. An interface that nearly tripled engagement with our beta customers. 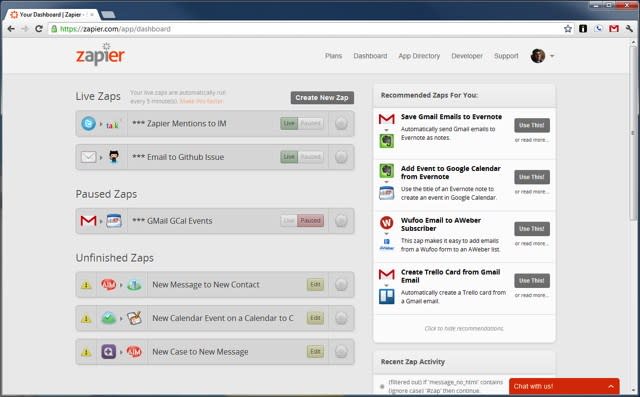 Over the last few months we'd been approached by a number of accelerators, angels, and venture capitalists about raising money and relocating the now small but growing company. Raising money is something we had no experience with so we knew we'd waste a lot of time and not be giving our customers features, support, and help they need. Accelerators are quite the fad and seem to be dime a dozen these days, but as far as accelerators go no one matches Y Combinator. After talking to mentors, customers, and YC alum we decided YC would be a good thing for Zapier and so we went for it.

We scoured our network and our userbase and asked every YC company we had warm intros to for help. At the end of April we were accepted into YC which meant a major move from Missouri to California.

In mid-June we launched. For many startups launching is a big ordeal. It's the make or break day. Sink or swim. For us, it drove a lot of traffic and attention, but we kept growing at a strong steady pace. It wasn't sink or swim. It was another tick mark in a long line of tick marks we'd been making as we grew the product with your feedback.

The support load kept growing. We implemented systems to make sure we could provide high quality support. We listened to the features customers were asking for. We built the most important ones.

In August we launched the developer platform. An easy way for vendors and app developers to add new services to Zapier.

It was an extension of our philosophy of good support. The best way to give users what they need and want is to enable them to do it for themselves and others which leads us to today... 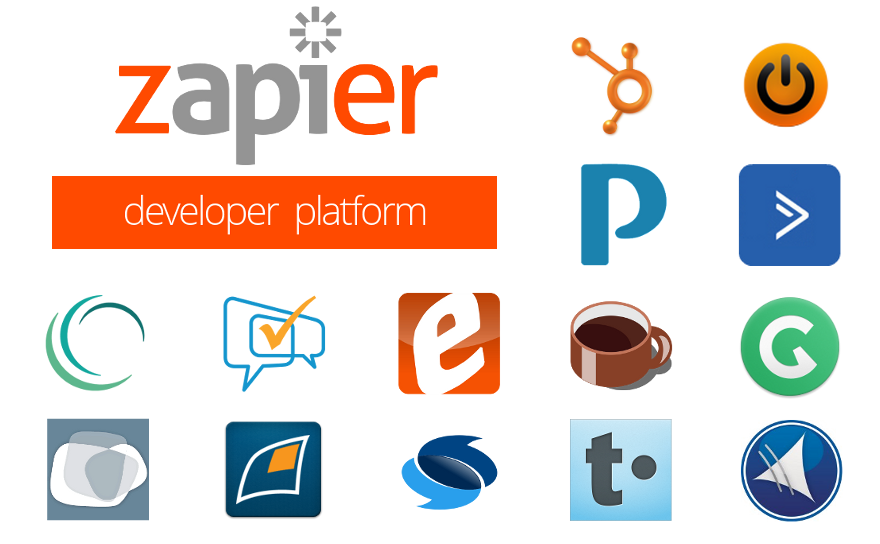 In early October we crossed 100 apps supported on Zapier. We now support the best-of-breed SaaS applications on Zapier. The model is proven. Revenue continues to grow. We have a good sense of the path forward. Where once we would have thought funding risky, now it feels natural. A way to help grow the product in the way it should grow and helping revenue grow alongside it.

We've partnered with the teams at Bessemer Venture Partners, DFJ and a handful of angels that know SaaS products, know companies, know product, know support, know marketing and can help ensure that Zapier will stay around for many, many years to come.

Funding isn't success and it's not the finish line. In many ways, funding is like a nice power up you find in Mario. Funding will let us move faster without sacrificing quality along the way.

To November and Beyond!

We never know 100% what the future may hold, but for Zapier we know that helping businesses run more efficiently and doing it with fun will always be center.

Expect to see more services supported, key features added, better support, and a slowly growing team that cares about helping you run your businesses the way you want.