2020 is exhausting but people are taking less time off than usual. Here's why

People need time off more than ever, but they may be less likely to take it

American knowledge workers are burned out as they continue to adjust to work-related issues caused by COVID-19. But even in the midst of that exhaustion, some are less likely to take time off from work.

That's according to a new survey commissioned by Zapier and conducted online by The Harris Poll. Nearly a third of knowledge workers (32 percent) say their mental health has been negatively impacted by stress caused by the global pandemic—and 22 percent are currently experiencing job burnout. Despite this, 39 percent of Americans have shortened or flat-out canceled their planned time off since March.

In this three part report, we’ll look at why knowledge workers may be avoiding time off, the most stressful parts about returning from a vacation, and strategies for preventing post-vacation burnout.

About Zapier: Zapier helps businesses grow using the power of automation to connect 2,000+ apps. Founded in 2011, Zapier has always operated as an entirely remote company, and today has 300+ employees working in 30 countries around the world. 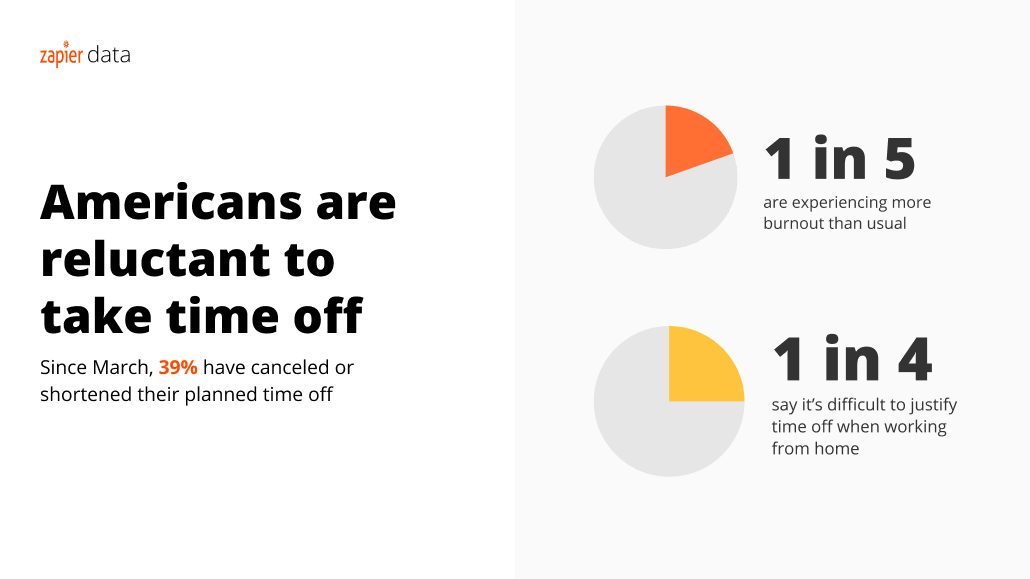 It's clear that the pandemic is increasing personal stress levels, but it's also affecting professional motivation and work productivity.

This stress and burnout is taking a toll on mental health.

Despite this, many Americans are taking less time off, or none at all

More than 1 in 6 knowledge workers (17 percent) say increasing responsibilities at work is a major reason they want to take time off right now. But not everyone is taking steps to alleviate this strain.

Since March, 39 percent of American knowledge workers have canceled or shortened their time off.

So why aren't people taking time off when they arguably need it the most?

The numbers paint a picture of stressed-out workers who are hesitant to take time off. It will be up to companies to ensure that employees are taking the time off that they need. Whether that's through mandatory PTO minimums, extra mental health days, or simply modeling time off from leadership teams, new measures will be necessary as we adjust to the current reality. Measures like this might be necessary as we all adjust to the current reality.

This survey was conducted online within the United States by The Harris Poll on behalf of Zapier from July 21-23, 2020 among 1,119 employed U.S. adults ages 18 and older, among whom 840 are knowledge workers (primarily work in a professional setting and use a computer for their job).