Vacations are supposed to relieve stress, not cause more. And yet: an overwhelming majority of knowledge workers—87 percent—say there are things they dread about returning to work after taking time off.

That's according to a new survey commissioned by Zapier and conducted online by The Harris Poll. The results reveal what employees dread most about getting back to work—and what they think could make it better.

This three-part report looks at the effect the pandemic is having on people’s professional lives, how to deal with the stress of returning to work after time off, and strategies for eliminating post-vacation burnout. 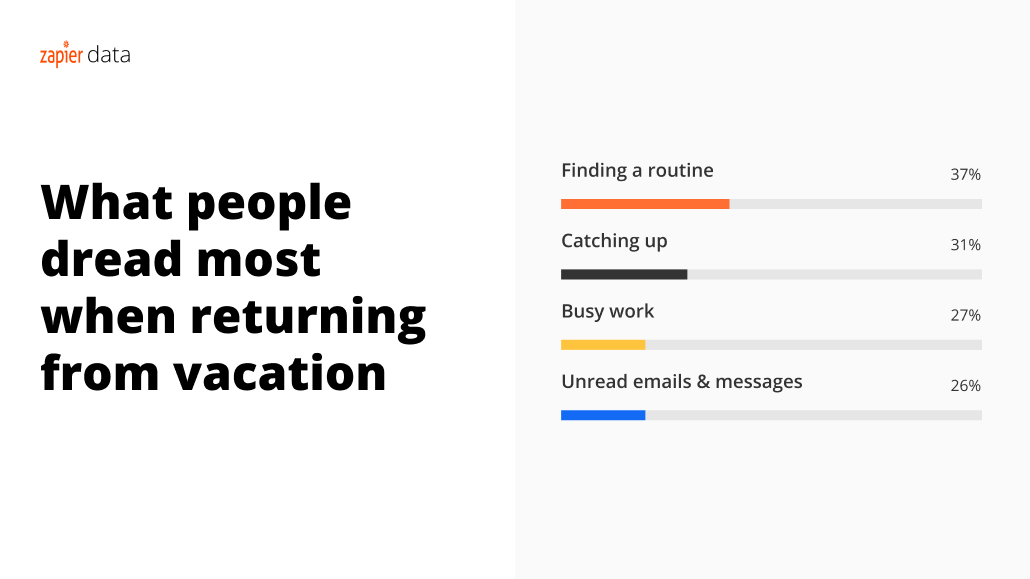 What people dread about getting back to work

87 percent of knowledge workers say there are things they dread about returning to work after taking time off. Some of the most dreaded tasks are:

What would make coming back to work better?

83 percent of knowledge workers say there are things that would make it easier to come back to work after a vacation. Across the board, these things involve automation—both to eliminate busy work and to be sure nothing slips through the cracks.

2020 is stressful enough. It’s important to take time off, but before you head out for a hard-earned vacation, proactively prepare for your return. Take a few minutes to create an automation that will surface the most important emails upon your return — saving you a day or more of wasted time sifting through unread messages.

Based on these results, we've come up with some suggestions for automated workflows to alleviate these pain points so you don’t dread the return to work. Take a look at these five ways to catch up on work after a vacation.

This survey was conducted online within the United States by The Harris Poll on behalf of Zapier from July 21-23, 2020 among 1,119 employed U.S. adults ages 18 and older, among whom 840 are knowledge workers (primarily work in a professional setting and use a computer for their job).