One in three Americans have a side hustle

And that number could significantly increase by the end of 2021

That's according to a recent Zapier survey of 2,001 Americans over 18 conducted online by The Harris Poll. The data also shows that many of these side hustles are relatively new. Among Americans who have a side hustle, two thirds (67 percent) started it within the past three years, and about 3 in 10 (31 percent) started in 2020. 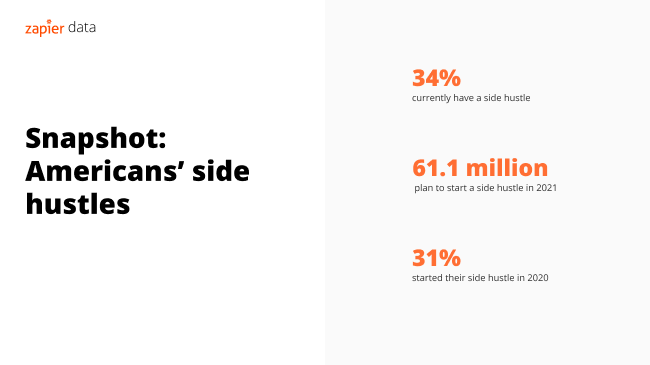 And the trend is only growing. About a quarter of Americans—24 percent—plan to start a side hustle in 2021, and about another quarter—27 percent—are undecided.

At Zapier, we've helped people—everyone from a career coach to a remote pizza party host, from a vintage art seller to a digital marketing strategist—efficiently run their side hustles while managing their full-time jobs. Here's what our data suggests the side hustle scene looks like heading into 2021.

Why start a side hustle? Money is a big reason—but not the only one 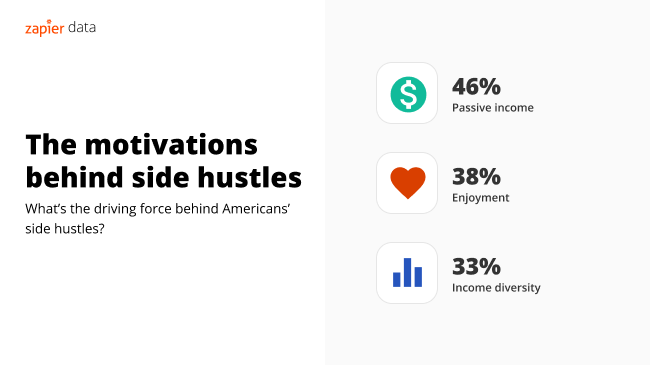 Almost half of Americans with a side hustle—46 percent—say they were motivated to start it by the prospect of creating passive income, by far the most common reason given. And there were other financial goals motivating this trend as well:

But money wasn't the only motivator. Non-financial reasons for starting a side hustle include:

Parents are more motivated by factors other than money 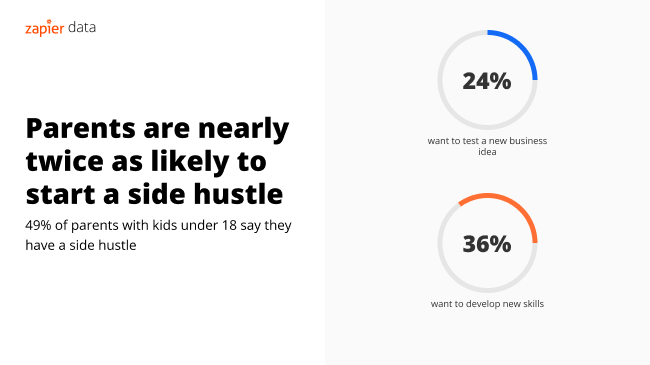 Parents of kids under 18 are almost twice as likely as those who are not (49 percent vs. 28 percent) to say they currently have a side hustle. Parents are also more likely to start a side hustle for reasons that aren't directly financial, while they are equally as likely to cite various financial reasons. Among those with a side hustle:

Starting a side hustle isn't easy—that's why they call it a hustle. But that hasn't stopped the majority of Americans from starting one or planning to start one this coming year.