How to Hack Your Diet for 2, 3 or Even 10x the Productivity

You've tried tons of productivity tools, read dozens of articles on how to get more done, and maybe even came up with your own tactics based on the practices of experts.

But have you tried a new diet? No, not to lose weight, but to gain focus and energy?

Changing what you eat at lunch, for example, from a high-carb, high-bad-fats meal like a burger and fries to anything mostly composed of meat, nuts, and vegetables, can significantly increase your productivity for the rest of the day, according to social scientist Ron Friedman, Ph.D.

Beyond productivity, studies have shown that a diet higher in fruits and vegetables not only increases output, but can lead to a greater sense of well being, happiness, and less stress.

We all know this on some level, right? When we put bad food in our bodies, we feel bad, and when we put in good food, we tend to feel good. But how do we optimize this for maximum productivity?

The Problems of a Mismanaged Diet

When you're eating poorly, you're subject to a host of issues that can seriously impact your productivity.

And many of these problems result in you having less willpower which reduces your ability to focus on the most important things and push through your work.

If you've ever felt lethargic after eating, or experienced a "food coma"—think the hour after a big holiday meal—then you've experienced the sudden spike and drop in your blood sugar and energy level that comes from eating certain foods.

This spike and drop is one of the biggest detriments to your willpower and productivity, and as a result causes almost all of the problems outlined above.

To reduce the chance of this happening, you want to stick to foods with a low glycemic index as much as possible.

Here's something that might surprise you: What do you think has a higher glycemic index and impact on your blood sugar spikes? White bread, or pure sugar?

Let's go through each meal and cover how you can optimize it for productivity.

A Breakfast of Champions

Breakfast is by far the most problematic meal of the day. If you're like me, when you think of breakfast you picture bagels, pancakes, waffles, toast, eggs, bacon, doughnuts, fruit juice, cereal, and sausage. If that's your picture, then you and Google Images agree—the photo below from Newport Creamery is the first result. 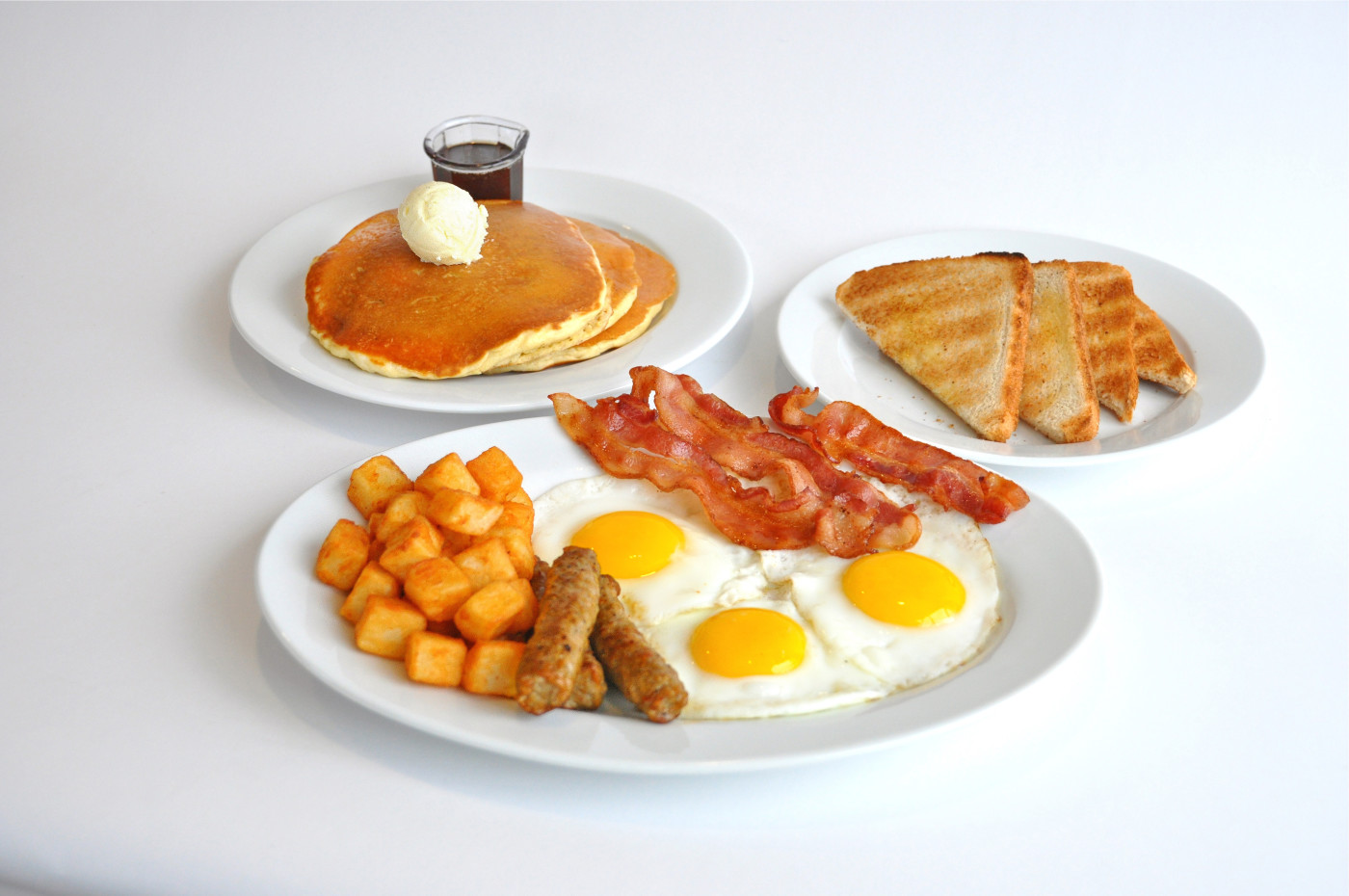 As delicious as it looks, that meal is going to wreck your productivity for the next few hours.

Bagels, pancakes, waffles, toast, doughnuts, fruit juice, and cereal all lead to a spike in your blood sugar followed by a drop in your energy before lunch—one which will usually be interpreted as a sign you need more coffee.

What about oatmeal? I didn't include it on the list, but it won't be much better. Pancakes fall at around 66 on the glycemic index, and oatmeal can be anywhere from 45-70 depending on the brand. It might be heart healthy, but it's certainly not energy or productivity healthy.

But Orange Juice has Vitamin C! Yes, and it's also loaded with blood-sugar-spiking fructose which will knock you out in a couple hours. If you're worried about scurvy, there are plenty of better options for getting in your Vitamin C such as kale and bell peppers.

So if all of these carb-y meals are out, what should you have instead? Stick to the meats, eggs, and vegetables. Protein and good fat will give you a much more sustained source of energy without spiking your blood sugar, and will prevent the crash that normally comes after carb-heavy meals.

If you're worried about the saturated fat and cholesterol in foods like eggs and bacon, you can opt to have just egg whites and turkey bacon, though you might not need to be that worried about it.

Lunch has to get a similar treatment as breakfast. The quintessential lunch food, the sandwich, has to go if you want to keep a stable energy level and maintain your productivity. With its high glycemic index, bread is too likely to give you the food coma crash that we're all used to.

Instead, try having just the insides of the sandwich, Mexican food without the chips, rice, or tortilla, or a salad loaded with chicken or fish (but avoid the heavy dressings). All will be just as tasty, filling, and keep your energy stable and productivity up.

Soda, and the Problem with "Diet" Drinks

Sugar filled sodas are not particularly good for you, and you can probably guess that the high sugar content leads to crashes later. Because of this peak and trough roller-coaster we tend to keep drinking them to keep the cycle going, or we grab other snacks to fill the hunger. But diet soda is fine, right? Not quite.

It turns out that fake sugars like aspartame actually kill off beneficial bacteria in your gut leading to poor nutrient absorption from your other foods. This can lead to foods that should have no effect on your waste-line becoming fattening since you can't process them as well.

Just as bad, your body can't tell the difference between real and fake sugar on your tongue, so it will lower your blood sugar in anticipation of it being pumped back up by a sugary drink. When there's no sugar (since it's fake sugar), your blood sugar levels stay low and you skip straight to the crash.

Avoid the soda, other sugary drinks, and even putting that packet of Splenda in your iced tea.

Good news—I'm not going to totally outlaw carbs this time. If you're planning on getting some heavy work done after dinner you might want to avoid them, but if you prefer to have a late dinner and then relax afterwards carbs might be just what the doctor ordered.

It turns out that there's a secondary reason carbohydrates make us tired: they stimulate greater production of melatonin, the brain chemical that tells us to go to sleep and helps us have a restful sleep throughout the night. Foods such as rice, bread, potatoes, and other starchy carbs can actually help you sleep better as long as you have dinner close enough to your bed time.

Aside from that, I'll reiterate the same things I said for breakfast and lunch. A high fat, high protein, high vegetable plate will help significantly with not only your waist line, but your productivity as well.

It is possible that with a too-high carbohydrate dinner you'll cause your blood sugar to drop towards the morning. This is one of the major reasons we feel groggy when we wake up, and it can be avoided by cutting carbs from dinner as well. You'll have to experiment and see what works best for you.

Another option is to have a high fat, low glycemic index snack immediately before bed, such as peanut butter. This will help keep your blood sugar stable throughout the night and will make it much easier to wake up in the morning.

Alcohol can be okay, so long as you're going to happy hour and not having a nightcap. You need at least one hour per drink (more or less depending on how much you weigh) to let the alcohol metabolize before you go to sleep.

If the alcohol is still metabolizing when you pass out, you won't sleep well while your body is processing it, which could turn 8 hours of sleep into 5 or 6. So a couple glasses of wine with dinner three or four hours before bed is fine, but a glass as you lie in bed and read should be avoided. 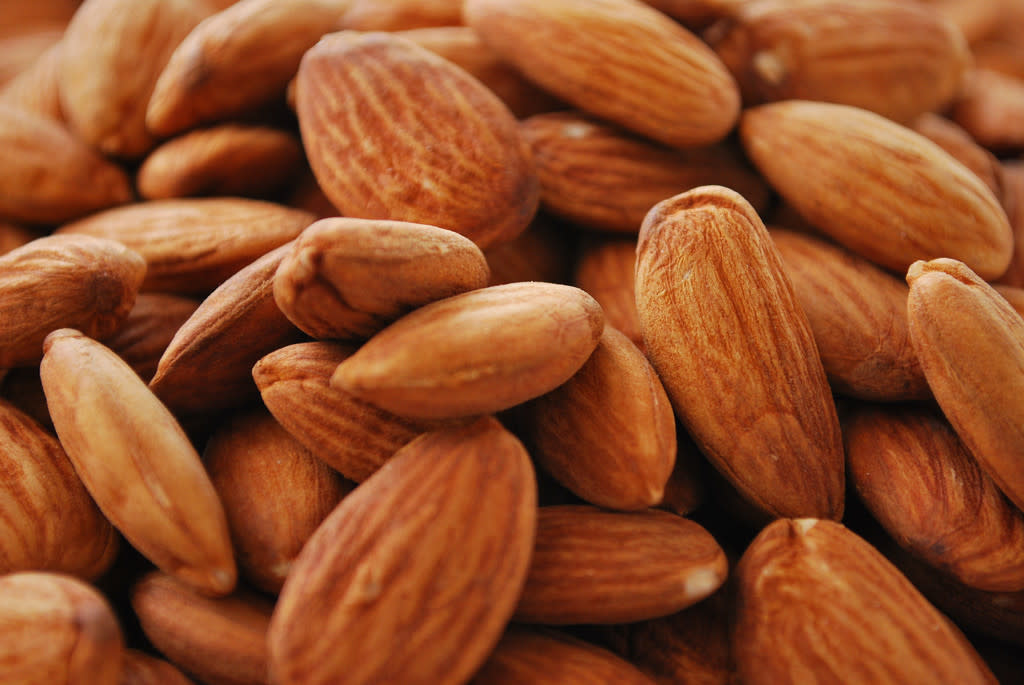 What are good snacks for boosting your productivity? It's a bit of a trick question: you shouldn't need to snack at all.

If you're following these tips, and eating a mostly fat, protein, and vegetable diet, you shouldn't need to snack. But if you absolutely must, then stick with something high in good fat, like almonds, since it will keep you full for longer and not give you a spike or crash.

Try this Diet for a Day

We've covered quite a bit in this post! It might be a little intimidating to try to implement it all at once, so if you're not sure where to begin, try the following diet for a day.

Discontinue the carb-heavy breakfast foods. This means no more toast, bagels, muffins, and so on. It might seem like a big sacrifice to make, but trust me, it's worth it.

Tomorrow: Try two eggs however you like them and some ham or turkey bacon.

Cut out the sugary, and fake-sugary, drinks. So all of the sodas and iced teas with sweetener need to go. If you like putting sugar in your coffee, try replacing it with cinnamon which will actually help keep your energy levels constant.

Tomorrow: Go with water for lunch.

Clean up your lunch. Switch from a carb heavy lunch to something leaner and with more meat and veggies. If you're used to having sandwiches and aren't sure where to look, try Mexican without the chips, rice, and tortillas; or try Thai food without the noodles and rice.

Tomorrow: Bring just the insides of your sandwich, and feel free to double how much you bring! You have to make up for the calories you lose from having no bread.

Toss the snacks and junk. Whether it's at home or in your office, if you keep snacks around they'll get eaten. Commit to eating more at your meals so you don't need them, but throw them out so you're not tempted. Not only will this help with your energy levels and productivity, but you won't lose as much time to taking breaks to find snacks.

Tomorrow: Pick up a bag of almonds at the store or gas station tonight and bring with you to work.

Be a productivity machine. If you implement the four steps above, you'll be well on your way to having more energy and a significantly higher output than you're used to. Even better, you'll be happier, healthier, less stressed, and have an overall better sense of well-being.

How have you changed your diet to increase your productivity? Please share in the comments!

You might also enjoy this article: "16 of the Best Ways to Work Smarter, Not Harder"

Nathaniel Eliason is a freelance marketer, writer and researcher on life optimization, armchair philosopher, and advocate for strategic napping.