How to use Zapier's Paths to automate decisions

How do you automate a decision? Actions are easy enough to automate, especially with Zapier. But a decision? Even a repetitive choice might, in turn, lead to other decisions. So how can you reduce the time you spend making the same decisions that lead to different outcomes?

You use Zapier's Paths, a conditional tool that lets you automate your repetitive decision-making. Let's say you have multiple win-back options for a customer who wants to cancel their subscription with you. Instead of having a separate Zap for each option, you can instead use Paths in your Zap. Path A can be for those who select a discount, Path B for transferring the account, and Path C for pausing the subscription.

Not only does this reduce clutter on your Zapier dashboard, but it can also reduce the number of tasks your Zaps run each month.

Before Paths, you'd have to build separate workflows for each scenario, relying on lots of Filters to make sure your Zap targeted the right information. Now, you just add Paths where your decision-making comes in. Check out this video to see Paths in action:

We also spoke with several Zapier users to learn about how they added Paths into their processes. Here are their use cases to give you ideas on how Paths can save you time, make you more efficient, and declutter your Zapier dashboard.

"Paths are simple and you'll love how organized you'll be able to keep your Zapier workspace."

Churn—the turnover of customers from a business—impacts every industry. Strategies, tools, and businesses built to combat churn abound, which in turn have to battle their own churn, and on and on it goes.

It's especially challenging for subscription services, like Frame.io. Frame.io is a collaborative platform for teams that create video. From heavy hitters like Netflix to freelancers and smaller teams, anyone with a video project can turn to the folks at Frame.io for quick uploads, seamless collaboration, instant feedback, and more.

Those latter groups—freelancers and small teams—don't have a year-round need for video. As Kyle Gesuelli, head of growth, explains, "They often have inconsistent projects and cancel their plan when their current project's over, and reactivate when a new project begins."

So, Kyle and the growth team strategized and came up with a plan for a self-service cancellation process. Clients start a chat on the Frame.io website where they can pause their subscription, receive a discounted month, or transfer the account to another client.

To support this new workflow, Kyle built a few Zaps and used Paths to send the correct info, depending on which win-back offer the customer selected.

"It's working brilliantly—saving about 13% of accounts from churning so far," says Kyle.

In Kyle's own words:

"We recently launched a new self-service cancellation flow on Frame.io leveraging Segment, Zapier, and Drift, where we progressively introduce more valuable win-back offers to customers who'd like to cancel to mitigate churn."

With the win-back options, clients have three options to choose between when they enter into a conversation with the Frame.io team. That chatbot is actually powered by Drift, and the decision the customer makes in the chat triggers the growth team's Zap. 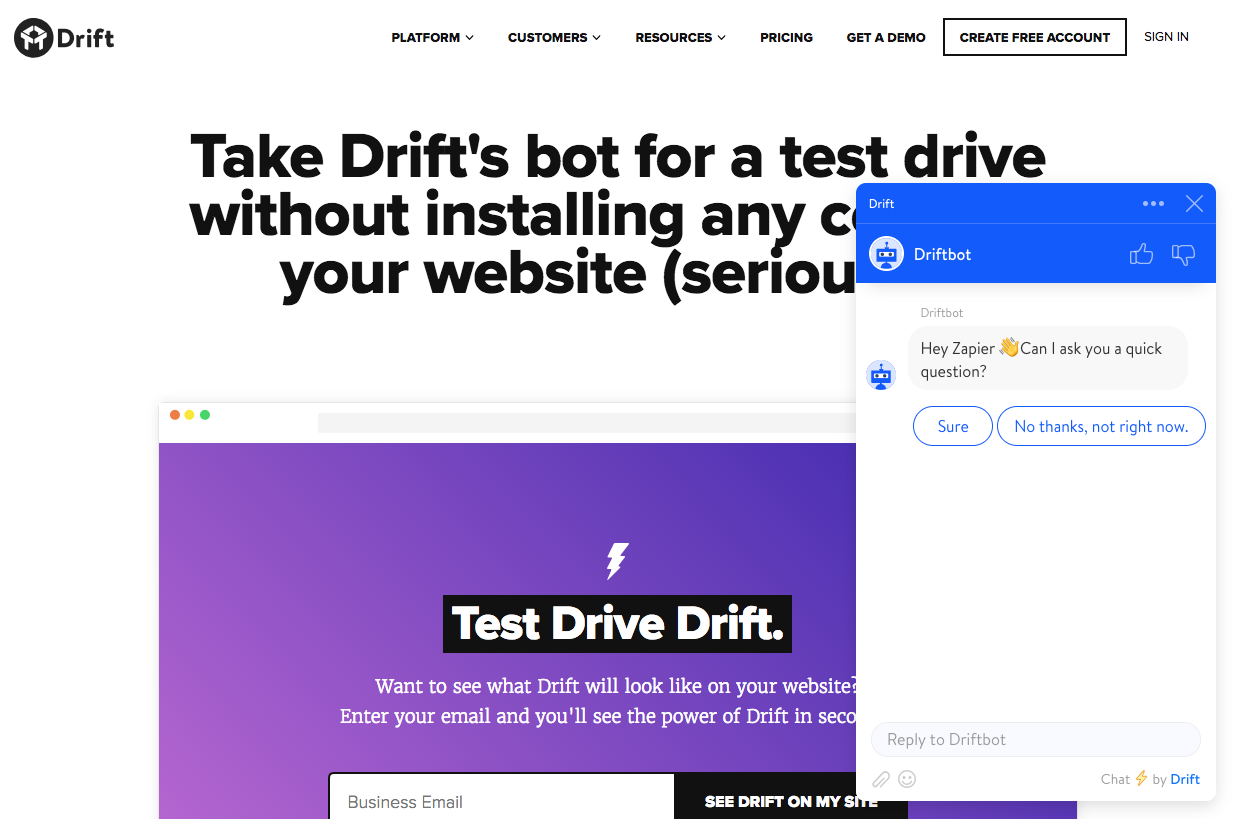 With all their win-back Zaps, Kyle has Zapier set to find a matching client within Drift. With the client's information ready in the Zap, Paths come into play. For folks who select a discount, different actions need to be taken if the client is on a monthly or annual plan. Path A is for monthly subscribers, while Path B is for annual.

Zapier then creates a support ticket in customer support app Intercom, creating a record in their support database and with a webhook, send all of this information—client ID, option chosen, reason—to Segment.

For Kyle, integrating Paths into his Zaps was easy and meant a more organized and navigable Zapier dashboard.

His advice to anyone thinking about using Paths is straightforward: "Use it! It's simple and you'll love how organized you'll be able to keep your Zapier workspace."

How an IT specialist automatically manages equipment tentals with Paths, Typeform, and ActiveCampaign

"Paths allow me to get the most out of my typeform."

Keeping track of equipment in an office isn't easy. Folks might borrow conference phones or projectors, and if there isn't a system to monitor this, it's easy to lose track of gear. It can get even more difficult when equipment, like a wifi hotspot, is needed for an all-day offsite adventure.

To help with all the comings and goings of equipment, the front desk at marketing automation platform ActiveCampaign use Typeform to track the person, item, and loan duration of any equipment that needs to be checked out. With ActiveCampaign's Deals pipeline and email automation, the front desk had a way to keep an eye on equipment but before Zapier, it required manually moving information from the forms to the CRM and monitoring the Typeform responses.

Skylar Damiano, IT specialist, was interested in streamlining the check-out process. He started building a Zap to automate a lot of the work but recognized a speed bump: Different actions need to happen at different times, depending on the check-out time for each item.

"If someone checks out a presentation laptop from our front desk, and they only need it for 4 hours, how do I make sure that they get alerted at the time that it is due?" he asks. "How do I differentiate this from someone who needs to borrow a conference speakerphone for the next 2 hours?"

Paths was the answer, and Skylar discovered them at the perfect moment:

"I found Paths as I was building my Zap—and within seconds of when I realized my logical challenge," Skylar says. "Paths was the solution that revealed itself to me right when I needed it."

With Paths, Skylar could build one Zap to handle ActiveCampaign's three different rental timeframes, instead of three Zaps. Here's how they do it:

Skylar's Paths Zap starts with Typeform. The front desk crafted a unique typeform for internal use. For every item checked out, the renter has to complete a typeform, which triggers the Zap. From there, we'll let Skylar explain:

This Zap has three separate Paths: one for a two hour rental, another for 12 hours, and the last for 24 hour rentals. Zapier knows which pipeline and email automation to send each employee to based on how they filled out the typeform.

Now, ActiveCampaign's equipment rentals process is automatic from start to finish, cutting out hours from the front desk team's workload.

Paths gave Skylar a chance to improve an already helpful process. Building a logic into this Zap gave him the opportunity to default to action, even with limited resources.

His recommendation follows in that thinking: "Just try it. If you're like me and you've dabbled in coding throughout your career and education, but don't have the current resources or means to build this out yourself, Zapier lets you build the conditional statements that you need right before your next meeting."

"I took six nearly identical Zaps and I was able to combine these into one Zap, using Paths."

As a company grows, teams can become siloed and separated easily. While all teams work towards a common mission, the work each one does might not filter through to the others. Even though the sales team relies on the engineering team to improve and iterate on the product, for example, the folks on sales can miss improvements if their fingers aren't on the pulse.

AK, senior sales engineer at Mixpanel, a platform that provides user and product analytics, wanted to close the distance between engineering and sales.

"I use Zapier to close communication gaps and silos throughout our organization, to bring data to people who want to know about it." he explains.

When AK first tackled this, he built a series of six or so Zaps, all doing roughly the same thing, but with minor changes depending on audience. But with Paths, AK combined these Zaps into one—and cut down on the number of tasks his Zaps run. Plus, it's far simpler for AK to manage one Zap than it is six.

"If we ever add a new segment/territory/line-size, I just need to change it in one place or add one Path," AK says.

With a few apps at his back, AK combined his Zaps and streamlined his Zapier dashboard. Here's how:

In order for AK to share information across teams—in this case, about product issues and their resolution—his Zap first looks up the issue, scouring Google Sheets for customer information while also grabbing information from a webhook.

With this information, Zapier notifies the product team in Slack that the issue has been resolved, and the Zap then goes on to look up the client's account in Salesforce. Paths come into play here, depending on whether or not the customer has a specific type of custom object in their Salesforce account.

"I found Paths to be a helpful new feature which lets me program Zaps that more than one-dimensional," AK says. "Multiple outcomes mean you can be more flexible with your business logic, and therefore more direct with where some piece of data should go and how it ought to be represented."

For those wanting to dabble into Paths, AK has an idea for where to get started:

"Draw a picture of what you're trying to do. When you want to make a Zap with multiple outcomes, it's very helpful to have the 'full picture' in your head—or on paper—before jumping into the editor and figuring it out."

While Paths can't do your thinking for you, they can automate your decisions. So take a look at your Zaps—you're bound to find a couple you can combine into one with Paths' conditional logic at its core.

Our stories explore how Zapier's users solve common problems. From marketers to CEOs, educators to real estate agents, millions use Zapier to automate their most tedious tasks. If you haven't yet, try Zapier for free to see what we're all about.