How to make virtual meetings fun

No one loves video meetings. No one.

If you think you love video meetings, I'm afraid you're not very knowledgeable about your own mind, and I'm sincerely sorry that you're discovering this about yourself while reading a software company blog post.

Meetings are generally unpleasant, and video makes it worse. This is why it's important to avoid unnecessary meetings on remote teams. But certain conversations really are better out loud—in those cases, a little fun can go a long way. I believe it was Socrates who said, "a spoonful of sugar helps the medicine go down." He wasn't referring specifically to meetings, but the general idea still applies.

A little fun can go a long way toward making video meetings less miserable—and more productive because people are more likely to stay engaged. It's easy for mandatory fun to become stale, though, so here are a few things we, at Zapier, do to strike a balance.

1. Pick a theme and commit to it

This tip is for presentation-based meetings, and it's one we feel pretty strongly about: the best internal presentations have a theme weaved throughout—ideally one that highlights the point.

Amanda Cotter, who leads Zapier's Support Operations team, did exactly this during a recent presentation about an upcoming software transition. Four different people presented, so they came up with a theme that would connect each of the talks while allowing them all to have their own flavor.

"We knew we had multiple stories to tell, so we centered them around one theme—a storybook," Amanda told me. "By having this guiding light, we were able to weave an engaging, consistent tale across multiple presenters." 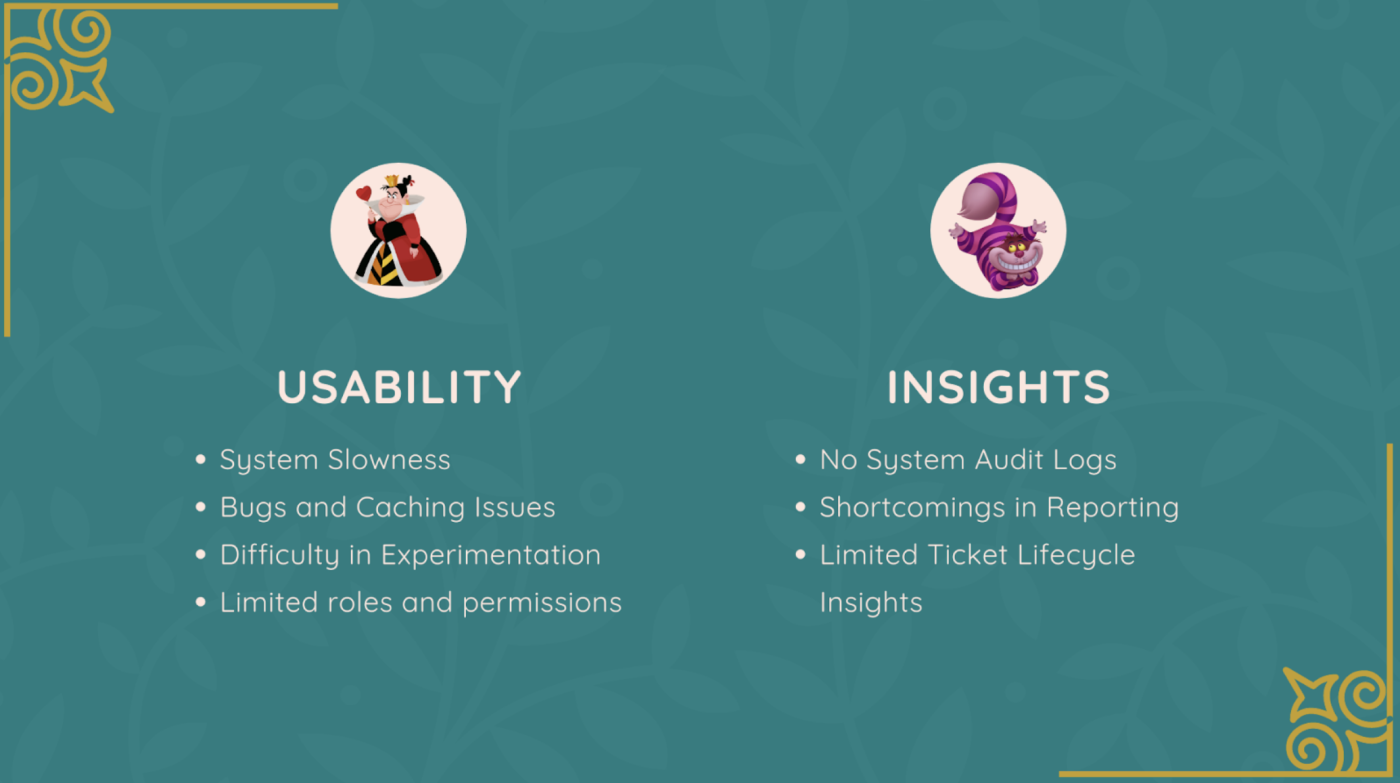 This wasn't just window dressing—the storytelling was weaved into the presentation. For example, one section used Alice in Wonderland to explain what switching to a new platform would feel like. Another used James and the Giant Peach to outline the migration timeline. More broadly, the storybook framing device made the migration seem like an adventure.

This made the entire presentation more engaging because it tied the concept (a software migration) to something more relatable (a story you already know and love). It's a bit more work than throwing in a couple of GIFs and calling it a day, granted, but if you're really trying to drive home a point, it's very effective. It's also a lot more fun.

Speaking of migrating software, our blog migrated from one content management system (CMS) to another around a year ago. This was very exciting for us but possibly less so for the rest of the team. How do you make a presentation about a CMS migration interesting? By having Perd from Parks and Recreation announce it.

You think I'm kidding. I'm not.

My editor, Deb at Zapier, set this up, and people here loved it. It cost around $200 and absolutely brought more than $200 worth of joy to the company.

You can do the same thing: head to Cameo, and find someone who's appropriate for what you're trying to do. Deb chose Perd because it was an announcement, but you might choose Shauna Malwae-Tweep if you're talking about press hits—or, you know, someone not from Parks and Rec.

Once you have the video, just use it as a slide in your presentation. Your coworkers will have a hard time topping it, I promise you that.

3. Fill the awkward space before meetings

It would be ideal if everyone joined video meetings at the same time, but let's be real: that's never going to happen. Instead, every video meeting starts with a couple of minutes during which everyone logs in and tries not to say anything.

It's awkward as heck, and left unchecked, that awkward feeling can make an entire meeting feel...off. My suggestion: lean in to the awkwardness, then fill the void with banter.

Over 500 people work at Zapier. We all get together once a week for an all-hands Zoom meeting. At some point, a couple of friends and I noticed this awkward silence and decided to fill it. It started simple: I would point out that the silence was awkward, and my coworker Hannah would ask me how I was doing. From there, it became me and the other writers on the team bantering about whatever and asking everyone else questions, which people answered in the chat. Eventually, this grew to the point where we'd incorporate music, like this time with my blog colleague Krystina:

No one asked us to do this—we just thought it would be a fun way to fill an awkward space. Turns out people liked it: we skipped a week, and people asked where we were. So now it's semi-official: we banter for a couple minutes, ask people questions, then "hand it off" to whoever is actually hosting the meeting. It's a small way to make the awkward time before the meetings feel a little more human, which I believe makes the meeting go more smoothly.

It's easy for this to feel forced, though, so I recommend you don't structure things too much. Keep it casual and informal—people need that in their day.

The above tips are focused on larger meetings and presentations, but what about smaller groups? Ryan Richards, on the learning and development team at Zapier, recommends starting with an icebreaker. His preference: a thoughtful question.

"The question is circulated in advance for folks who like to prep," Ryan told me. Here are a few examples that went over well with the team:

Questions like this, which are out of the ordinary (at least for a work meeting), tend to prompt better conversation than the usual "what are you up to this weekend?" sort of opening. Give them a try.

It's important to be a good coworker to your pet, and including your best friend in meetings is an important part of that. Never apologize when they try to join in—instead, actively include them. That's what Katie, on the engineering team here at Zapier, did. 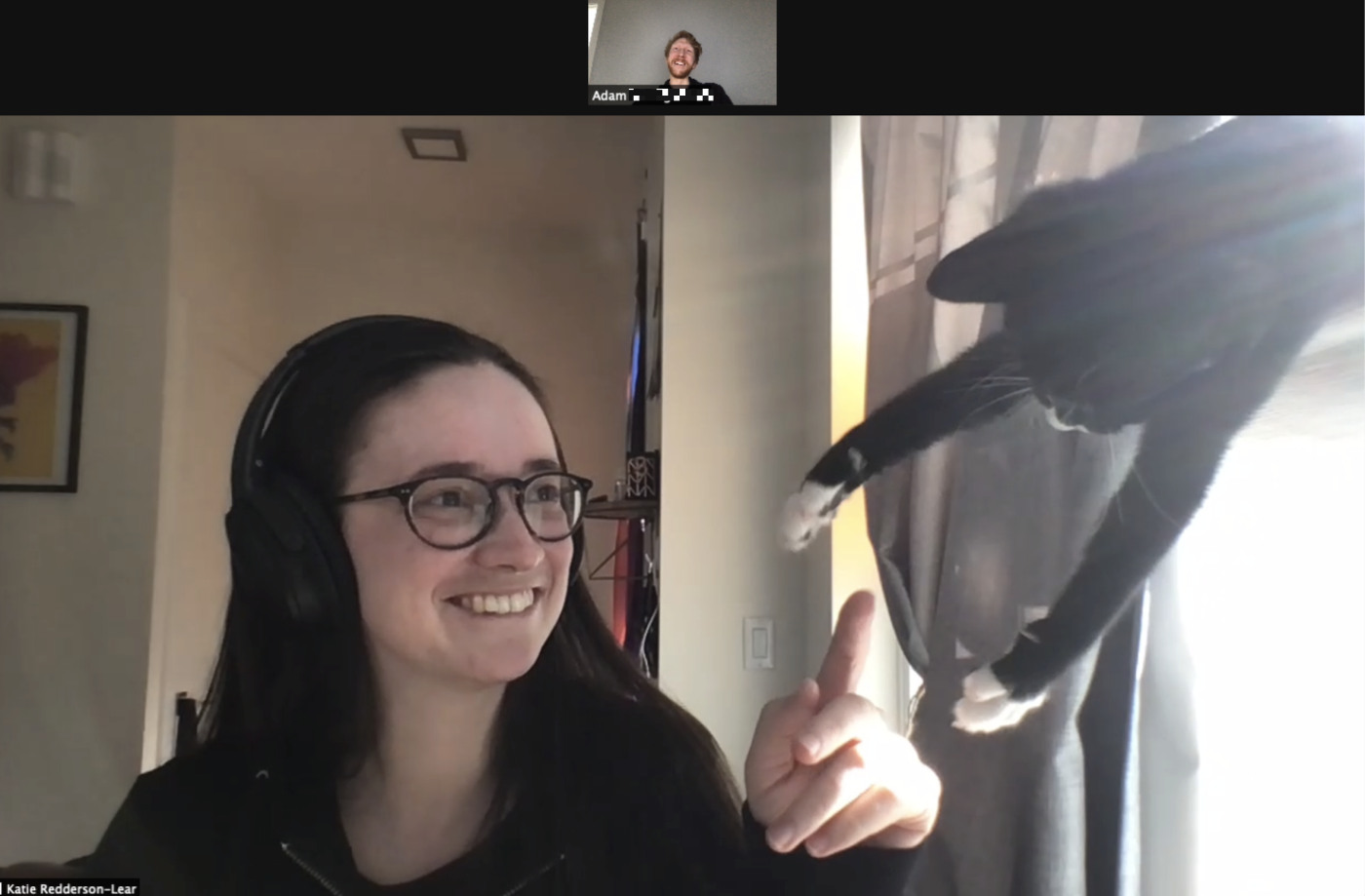 Adam called this the best meeting he's ever been in. If that's not a success, I don't know what is.