4 things you shouldn't use meetings for

4 things you shouldn't use meetings for

There's something about unnecessary meetings that can turn a group of intelligent, kind, charismatic people into one collective brainless, mean, boring monster.

To be clear: I don't think all meetings are useless. I just think some people try to use meetings to accomplish things they don't work for. I feel the same way about monster trucks: great for entertainment, terrible for the typical commuter. It's not that monster trucks are bad, per se; it's just that there are better tools for the job. Meetings are the same way—there are other things you can do instead.

Time is valuable, and an unproductive meeting wastes several people's time simultaneously. That's why, at Zapier, we try to keep meetings to a minimum. Here are some types of meetings we tend to avoid.

Do you want to quickly let people know what you're working on or quickly find out what everyone on your team is up to? I highly recommend not having a meeting.

So does my colleague Scott Williams, engineering manager at Zapier. He wrote about replacing daily standups with a bot. It sounds weird, but it's pretty straightforward: the bot asks all the questions that used to come up during standups, then compiles them into a report. 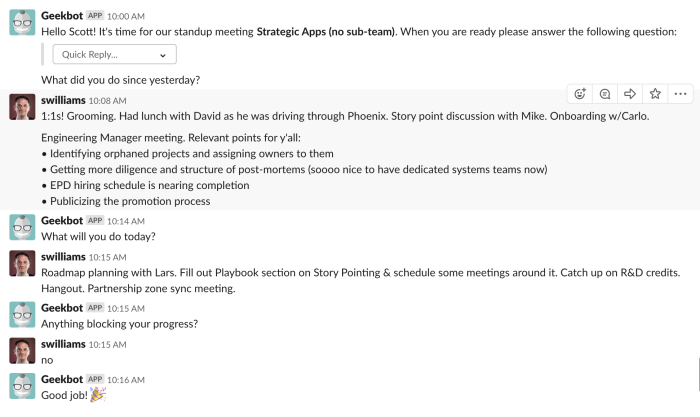 The bot posts everything in a public channel, allowing everyone to keep up with what everyone else is working on. It's a lot more efficient than a meeting, especially if your team lives across time zones.

You don't have to build a bot—you could use a daily email thread or even just a quick post in your team chat app saying what you're up to. That's what my team of writers and editors does: 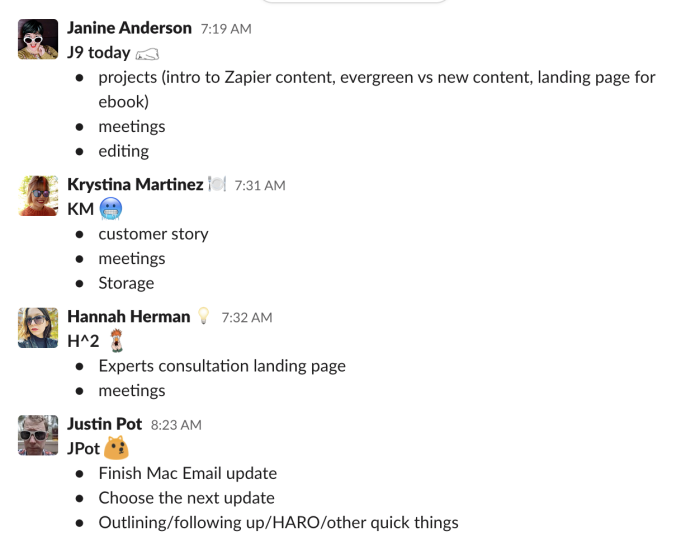 We use emoji to represent our current mental state. This is optional but highly recommended.

It's quick, and it keeps everyone informed. People can follow up in a thread if they have questions, or they can go on with their day.

Anything without an agenda

Cortney Hickey, executive assistant at Zapier, was quick to tell me that meetings without an agenda, or where people can't stick to an agenda, simply shouldn't happen.

Do you know what a meeting will cover and what people will decide, learn, or gain while attending? If so, write that down and share it with everyone. If not, don't have a meeting.

Meetings should be an exception, not the rule. If you can't explain why you're having a meeting, you shouldn't have one. Agendas are your chance to do that. You can automate the agenda-making process with Zapier: do things like automatically creating a Google Doc agenda whenever you schedule a meeting in Google Calendar.

And if you finish everything on the agenda?

"If you can decide something quickly in a meeting, you should not keep the meeting going," Hickey told me, "even if you have more time."

Anything with too many people

Jeff Bezos, whose name you might recognize, uses a two-pizza rule to decide. He won't attend a meeting unless two pizzas could feed the whole group. The exact number of people this allows for depends on what pizza you order (and how many slices you can eat), but the basic idea is that you probably shouldn't have more than eight people attending any given meeting.

You don't have to agree with this rule, specifically, but you should think about where the line is for your team. Recall meetings you've attended with lots of people. Did everyone participate? Was the conversation smooth and productive? If not, consider cutting back on the number of people you invite to your next meeting. You might get more done.

Meetings can be great for building on ideas but not the best for thinking of them from scratch. Hannah Herman, a copywriter at Zapier, told me people should come to brainstorming sessions prepared:

I love working group-style meetings where we get to bounce ideas around, but it really helps when everyone brings one to three ideas or pitches. Otherwise, it often becomes folks sitting in awkward silence, all trying to think or be creative.

This is similar to the agenda point—meetings go better with preparation.

Have a regular meeting? Try making it less frequent.

Sometimes meetings become a routine, and no one thinks through whether they need to happen. You can find out whether they're still necessary by dropping them and seeing what happens.

I don't notice the lack of a meeting on the skip weeks and still feel like I get enough face-time and info from the team. I think a weekly cadence is easy to default to, but perhaps we should more often ask ourselves if that is necessary.

It worked for her team, and it might work for yours. Try it out.

Meetings aren't bad, and there are ways you can make them better. But they're easy to overuse—and that's not free. A fifteen-minute meeting with 10 people is two-and-a-half hours of overall time. What could your team do with that time? Think about that before scheduling a meeting, and consider doing things asynchronously instead.