How ClickUp became one of Zapier's fastest-growing apps

Working with the Zapier team is a dream! They are incredibly responsive and flexible in creating mutually beneficial co-marketing campaigns. Our partnership continues to bring new opportunities for every member of our team, and we're looking forward to continued growth in the years to come.— ClickUp

Founded in 2017, ClickUp is a productivity app that allows teams to manage both their professional and personal tasks on one intuitive platform. What started as an internal project management tool is now used by over 200,000 teams worldwide, with fully customizable workflows and workspaces. Their mission? To save people time by helping them become more productive.

While ClickUp believes there are too many tools to keep track of, the reality is that their users still need to access dozens of external apps—and transfer information between them. To support these needs (and their mission to build a better way to work), ClickUp partnered with Zapier early on so ClickUp users could connect their favorite apps and automate repetitive workflows (like creating Google Calendar events from new ClickUp tasks).

By launching a Zapier integration in the app's first year, ClickUp helped their users save time via automation right from the get-go. ClickUp quickly saw the benefits: Customers who used both ClickUp and Zapier together churned less, upgraded more, and had higher lifetime value.

That's when ClickUp took their Zapier integration to the next level: They made Zapier even easier to discover in their platform using the JavaScript widget. Today, ClickUp is one of Zapier's fastest-growing apps and ships new integration features (that customers request) every week.

The fact that ClickUp is one of the fastest-growing apps on Zapier is no surprise—they take listening to their customers seriously.

When ClickUp users reach out to Zapier with support requests, Zapier then logs these onto ClickUp's "Partner Program" dashboard in the health score section. Their team gets access to the open-feature requests (like new Zap triggers, actions, and searches) that customers most want to see.

Every week, ClickUp dedicates resources to building new features to answer these requests—based directly on Zapier and ClickUp users' feedback.

While shipping highly requested features every week is a surefire way to delight customers, there's another step to make it truly easy: rendering these added features discoverable.

That's why the ClickUp team also builds Zap templates that highlight what's new—using Zapier's JavaScript widget to surface them inside the product.

Doing so reflects a ClickUp credo: putting the customer first, no matter what.

ClickUp uses Zapier's JavaScript widget to display their most popular Zap templates onsite, which is the easiest and quickest way to deliver automation inspiration right where their users need it most.

When users go to ClickUp's site, they can learn more about the Zapier integration through ClickUp's dedicated Zapier page. This helps ClickUp users understand how Zapier and ClickUp work together, what triggers and actions ClickUp supports, as well as popular workflows. As seen above, ClickUp matched the widget to their own branding using Zapier's advanced styling options.

Here, they can browse through popularly paired apps (powered by Zapier)—such as Google Calendar, Salesforce, and GitLab. These get refreshed every time it updates through Zapier, so there's no need for manual checks every week.

ClickUp has seen that Zapier drives long-term business value, as ClickUp customers using the Zapier integration are more active and better retained in the long run.

Users with a Zapier connection are 21% more active in ClickUp than a typical signup. Because these users are more likely to be paying for the service, we saw that they had a higher lifetime value, too.

That's why ClickUp also surfaces these Zap templates inside their product so that users can easily discover popular Zap templates when they're logged in.

ClickUp customers using Zapier proved that they were more valuable—and drove business growth—in comparison to those who weren't using Zapier.

Not only are ClickUp users with a Zapier connection 25% more likely to upgrade to our paid plans, but it's also clear that they are 21% less likely to churn.

That's why ClickUp also promotes and supports Zapier usage throughout the customer journey, including:

On the ClickUp blog: 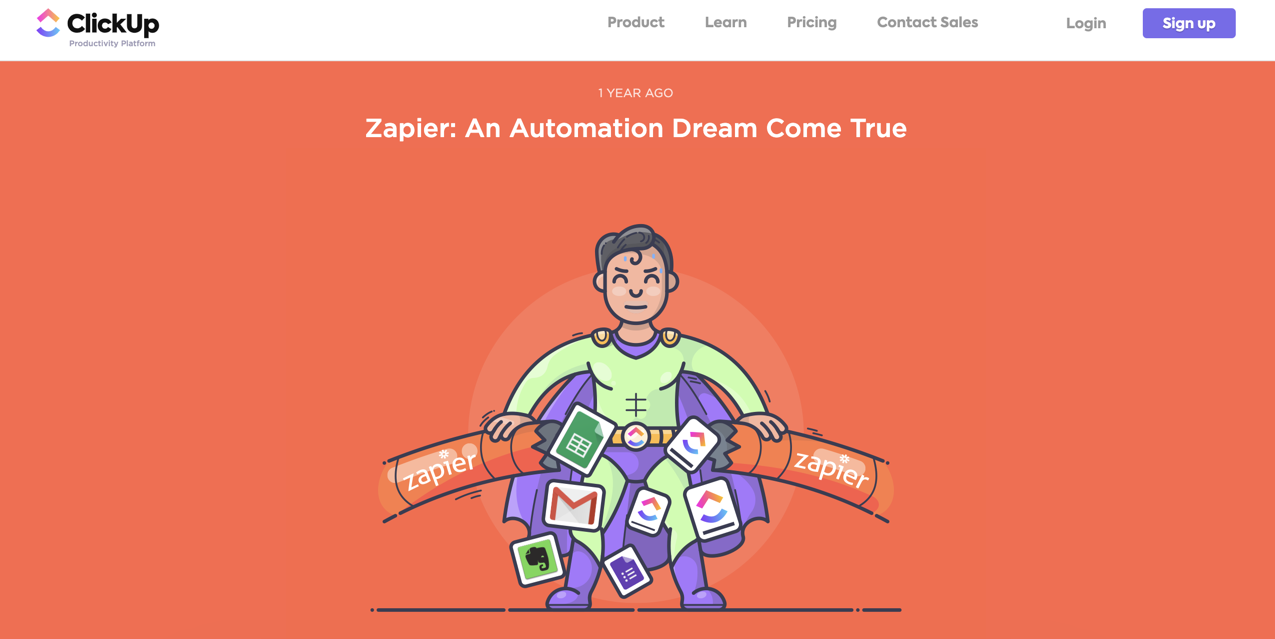 On their integration landing page: 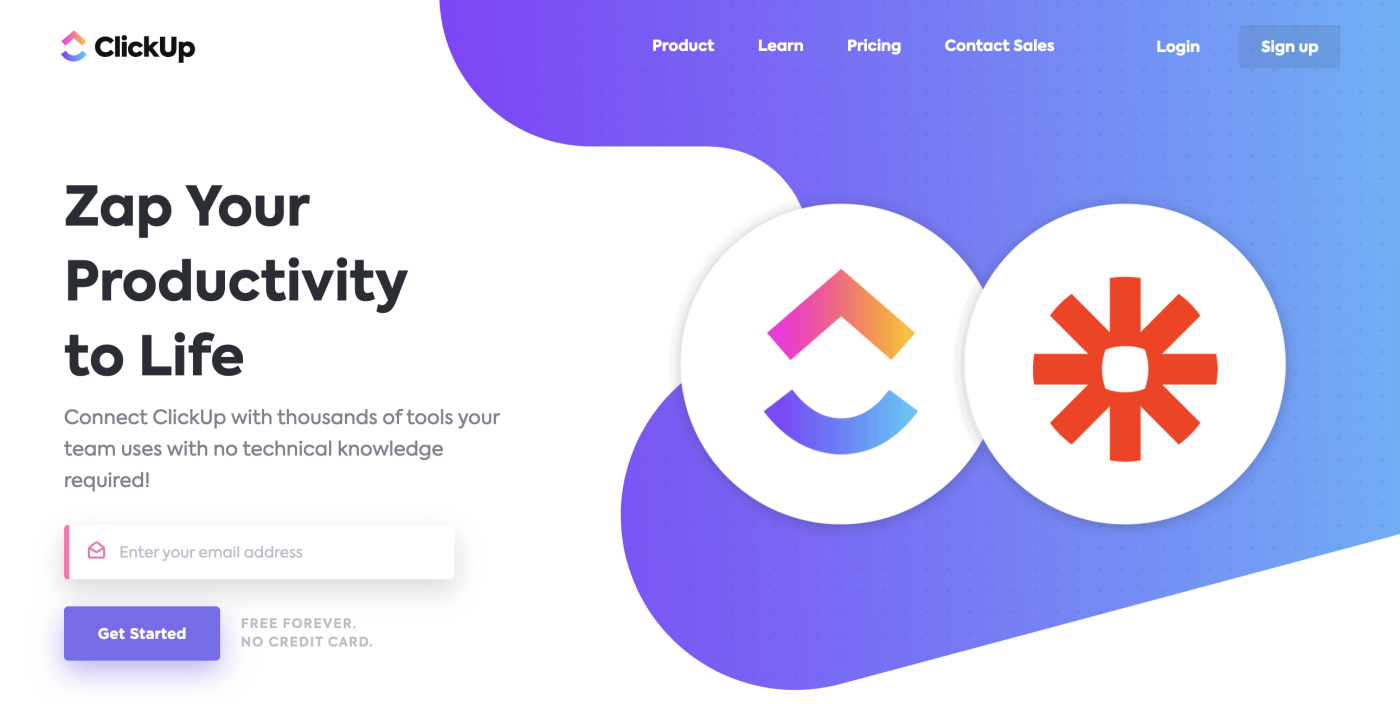 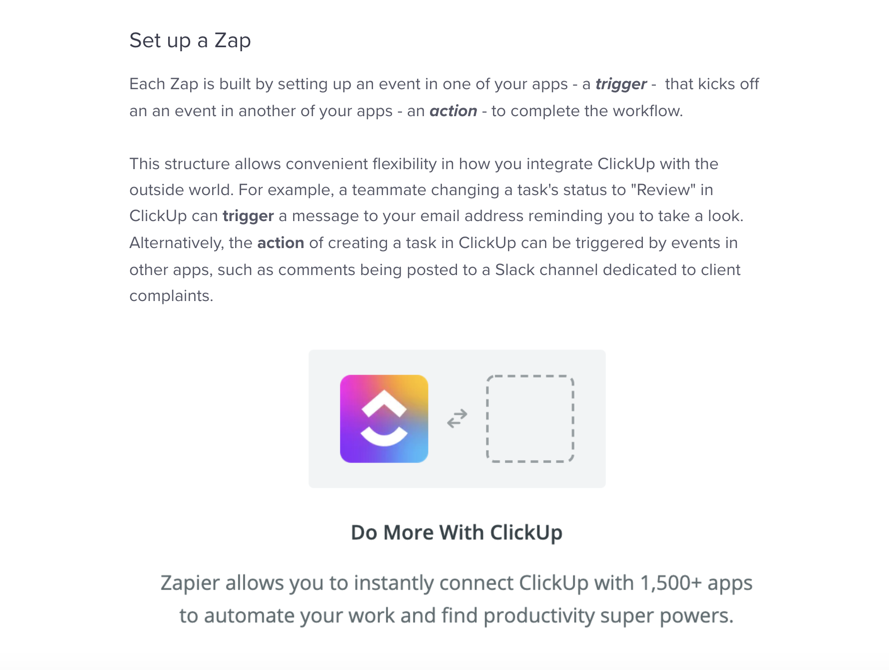 By presenting Zapier prominently onsite, ClickUp ensures that prospective customers know right from the get-go that their automation needs will be met. ClickUp also trains their customer service team to answer questions about Zapier when users write in requesting support. As a result, ClickUp has become one of Zapier's fastest-growing apps, which suggests small businesses are looking for ways to collaborate and coordinate on team projects.

A look to the future

We think that the future of productivity lies in automation. Offering integrations to our customers via Zapier means they can automate the ClickUp workflows they depend on to move their projects—and businesses—forward. It's our way of better serving our customers who also rely on Zapier. In turn, our users churn less, upgrade more to paid plans, and have higher LTV.

ClickUp and Zapier will continue to collaborate on co-marketing campaigns, with the joint mission of providing users with the very best way to be productive.

Find out how you could drive similar results with Zapier. Get in touch with us at partners@zapier.com to discover more about our partner program.