Be Efficient, Not Productive

I'm not here to make a semantic argument, really. But there's a difference between being productive and being efficient, and efficiency wins every time.

Productivity measures how much you do or produce within a given timeframe. Efficiency, on the other hand, is about being productive with less effort. So if you answered 50 more customer support tickets this week because you worked through them as fast as possible, you were more productive. But if you answered 50 more tickets because you used a text expansion app to respond to commonly-asked questions, you were more productive and more efficient.

So to be more productive in a way that won't burn you out in the long run, you have to figure out how to be more efficient.

My Own Journey Toward Greater Efficiency

Several months ago, I wrote a Twitter post complaining about the studies that are released every so often saying things like "bloggers spend an average of three hours writing a blog post." As someone who almost always spends two full workdays writing one piece, this statistic seems ridiculous to me.

A couple of people replied and agreed. But one person replied and said that it never takes her more than a day to write a 3,000-word blog post. That got me thinking: is it possible to reduce the amount of time it takes me to do the same thing?

To find out, I broke down all of the tasks I complete when writing an article:

After I had a list, my goal was to figure out what I could cut. The answer: nothing. I mean, technically, I could skip the SEO research or leave the editing to my editors. But eliminating those tasks would also massively decrease the quality of the work I was producing.

I asked myself: if the quality is worse, am I truly more productive? I don't think so. I think I'm just worse at my job.

In his post Automation Is a Mindset, Not Just a Tool, David Zisner argues that when companies have more work than they're capable of doing, they tend to ask the question, "Who will do this work?" But what they should be asking instead is, "How will this work get done?"

I think this applies to individuals too. So as I was performing these tasks, I started asking myself:

One of my tasks stood out to me as I asked these questions. In the process of adding a post to a client's CMS, I had to edit every outbound link to set it to open it in a new tab. I was sometimes manually adjusting 150 different links in WordPress, which requires three clicks per link. Once I identified that, I started doing a find-and-replace-all in Google Docs to automatically add the open-in-new-window HTML to every single link. 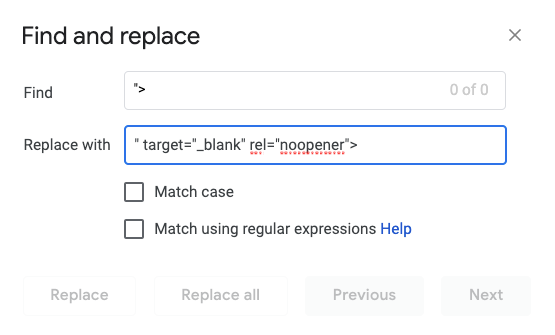 Six clicks versus 450. Thirty seconds of work instead of 30 minutes of work.

With that win behind me, I started to look at other small activities I could expedite—other things that, when I asked myself Is there a better way to do this?, my answer was, There has to be.

Maybe I could use a plugin like Image Attributes Pro to automatically turn my image filenames into alt text for each image. Or maybe there's a plugin or feature that automatically centers all images in blog posts. There's not, by the way—at least not that I could find.

Zapier's automated workflows (Zaps) are a perfect example of small efficiency wins. Each performs a small task that—if you did it yourself—wouldn't take all that much time like adding Typeform responses to Google Sheets, sharing Google Forms responses in a Slack channel, or transferring Outlook events to Google Calendar. But those few minutes at a time add up. My editor at Zapier has saved more than 12,000 minutes with Zaps. That's 25 full eight-hour workdays.

Of course, you can have big efficiency wins too. Should you be doing that task that takes you eight hours a week, or should you automate it, delegate it, or just stop doing it in favor of something else that gets you to your goal with less effort?

Efficiency, of course, isn't only about how you perform specific tasks. You also need to consider how the general way you work impacts your efficiency.

And you can even increase your efficiency by procrastinating on purpose. Sometimes, when I'm trying to write—but every word I put on paper feels like a monumental effort—I'll walk away from my desk and do something else for a while. Inevitably, as soon as I'm not trying to write, I'll think of dozens of things I should be writing about. More output, less effort.

As a leader, you can help your team find ways to become more efficient by setting goals that go beyond simple quantity measures. So instead of a quantity-focused KPI like "Close 20% more support tickets in Q3 than Q2," maybe at least one of your team goals should be "Find three ways that the whole team can close more tickets at scale." The first goal encourages people to work faster to close more tickets. The second encourages people to work smarter, ask the right questions, and look for ways to become more efficient that—if implemented on a larger scale—could lead to significant productivity increases for the whole team into the future.

Be mindful of every task you do during the day—no matter how small—and ask yourself: "How should this get done?"