Deadlines: We all have them, and we all dread them. Even when we meet them, there's always another one just around the corner. It's not hard to see why studies show that deadlines are the most common cause of workplace stress.

But there are ways to stop drowning in deadlines—to stop seeing them as something negative and start embracing them. And making deadlines work for you instead of the other way around is the first step toward managing stress and improving your productivity.

Why Do Deadlines Stress Us Out? 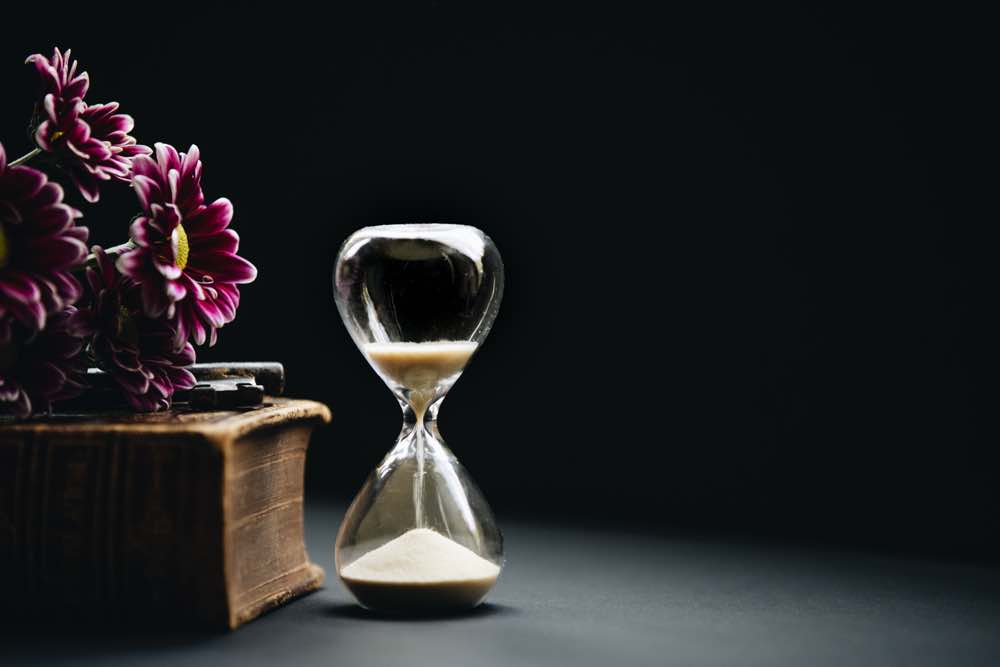 Sometimes, deadlines are set arbitrarily by an external party like a boss or project sponsor. Arbitrarily set deadlines may not take into account things like the amount of work required to complete a project or how much other work you have on your plate. Looking at a looming deadline you know you'll never meet—or that you'll have to work overtime to meet—is stressful.

Other times, we set deadlines for ourselves, but self-imposed deadlines can also cause stress because we're really bad at estimating time. Because we tend to underestimate how long a task or project will take us to complete, we set overambitious deadlines for ourselves that end up being just as stressful as the arbitrary deadlines set for us by others.

Finally, deadlines can be stressful because we only set one: the date when all work for a project will be complete. A single, end-date deadline for a huge project can lead to procrastination, either because we underestimate how long the project will take to complete or because we're too overwhelmed by the size of the project to get started.

While there's not much you can do to combat the stress of unrealistic deadlines set by someone else (aside from pushing back on the deadline by showing why it's unreasonable), most of the ways that deadlines stress us out can be avoided.

And if you learn how to avoid unnecessarily stressful deadlines, you can start using deadlines to motivate yourself and increase your productivity.

How to Set Deadlines That Motivate You

If you're struggling with stress caused by self-imposed deadlines or procrastination, try these five techniques to set deadlines that motivate you.

1. Set multiple deadlines instead of just one.

In 2002, researchers Dan Ariely and Klaus Wertenbroch conducted a study about deadlines and their effectiveness by assigning three proofreading tasks to three distinct test groups:

The group that was assigned weekly deadlines performed significantly better than the other two groups: They made fewer errors and missed fewer deadlines. 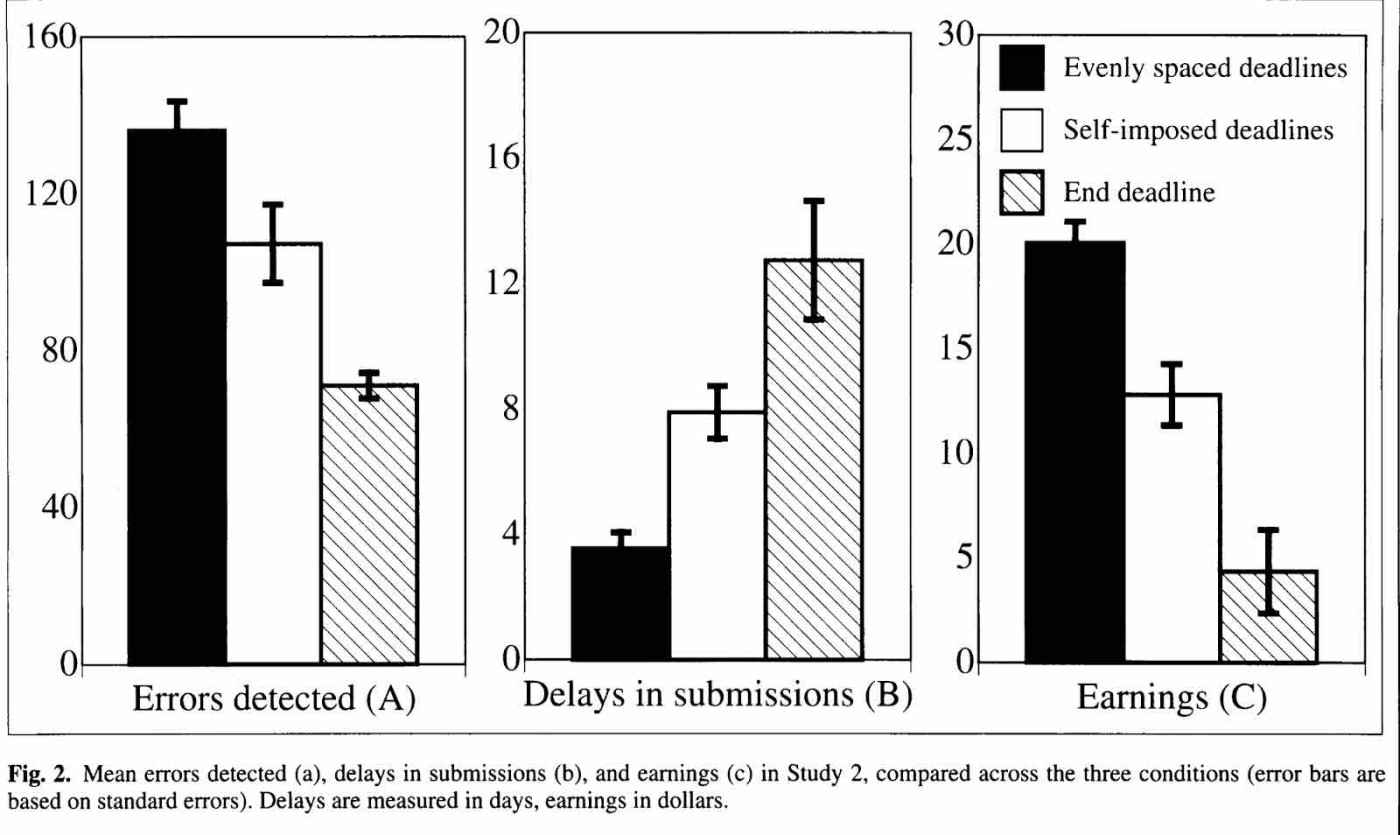 Results from the three groups showed that evenly spaced deadlines produced the best results in all areas.

Based on this research, one better way to create less stressful and more realistic deadlines is to break large projects into smaller tasks, setting deadlines for each task instead of just one final deadline.

To use an example from product management, "ship product by February 15" sounds like a monumental task that can freeze you up. But "sketch ideas by January 1; do a mockup by January 15; build a rough prototype by January 31" is much more approachable because you have specific and concrete tasks you can tackle.

Evenly spacing out deadlines over time also gives you a sense of progression, which can ultimately motivate you to reach the finish line. In 1932, while psychologist Clark Hull was observing rats racing to get to a food reward, he noticed that as the critters got closer to the reward, their efforts increased. He called this behavior the goal gradient hypothesis.

If perceived progress serves as a stimulus for achieving the end goal, using a phased—or spaced out—approach is one strategy to move you further down the line. As you progress down the timeline, you'll cross more and more deadlines off your to-do list. And seeing yourself getting closer to the end goal can increase your efforts at the last minute to pull you through.

Using a tool like TickTick (free plan available) helps you visualize how much progress you've made on a project and motivates you to complete the remaining tasks. When you check off an item from your to-do list, it updates a progress bar to show how close you are to completing the project.

Another option is Microsoft To-Do (free): It has prioritization features that suggest what you need to get done next.

Once you can clearly see the smaller tasks within the larger project, you'll have a better chance of organizing your time in a way that makes getting to the finish line simpler and less stressful.

Here's a bit of good news: Not all stress is bad. In moderation, stress can motivate us rather than deter us from finishing a project on time.

Developed by psychologists Robert M. Yerkes and John D. Dodson in 1908, the Yerkes-Dodson law states that the more mental arousal there is, the more efficient a person becomes. But after you hit a certain threshold, your performance begins to decrease.

The term "mental arousal" is often interpreted as "stress" in subsequent writings about this research. When we feel stress, our brains and bodies perform a series of actions that result in the release of adrenaline, which makes us more alert, sharpens our senses, and energizes all parts of our body. In other words, stress arouses us both mentally and physically.

According to the Yerkes-Dodson law, the appropriate amount of stress should inspire increased productivity and improved performance—at least until stress levels start to exceed the optimal point.

So what are those "perfect" stress levels that can help us not only complete a project on time, but also do so to the best of our ability? Well, it depends on the type of project: 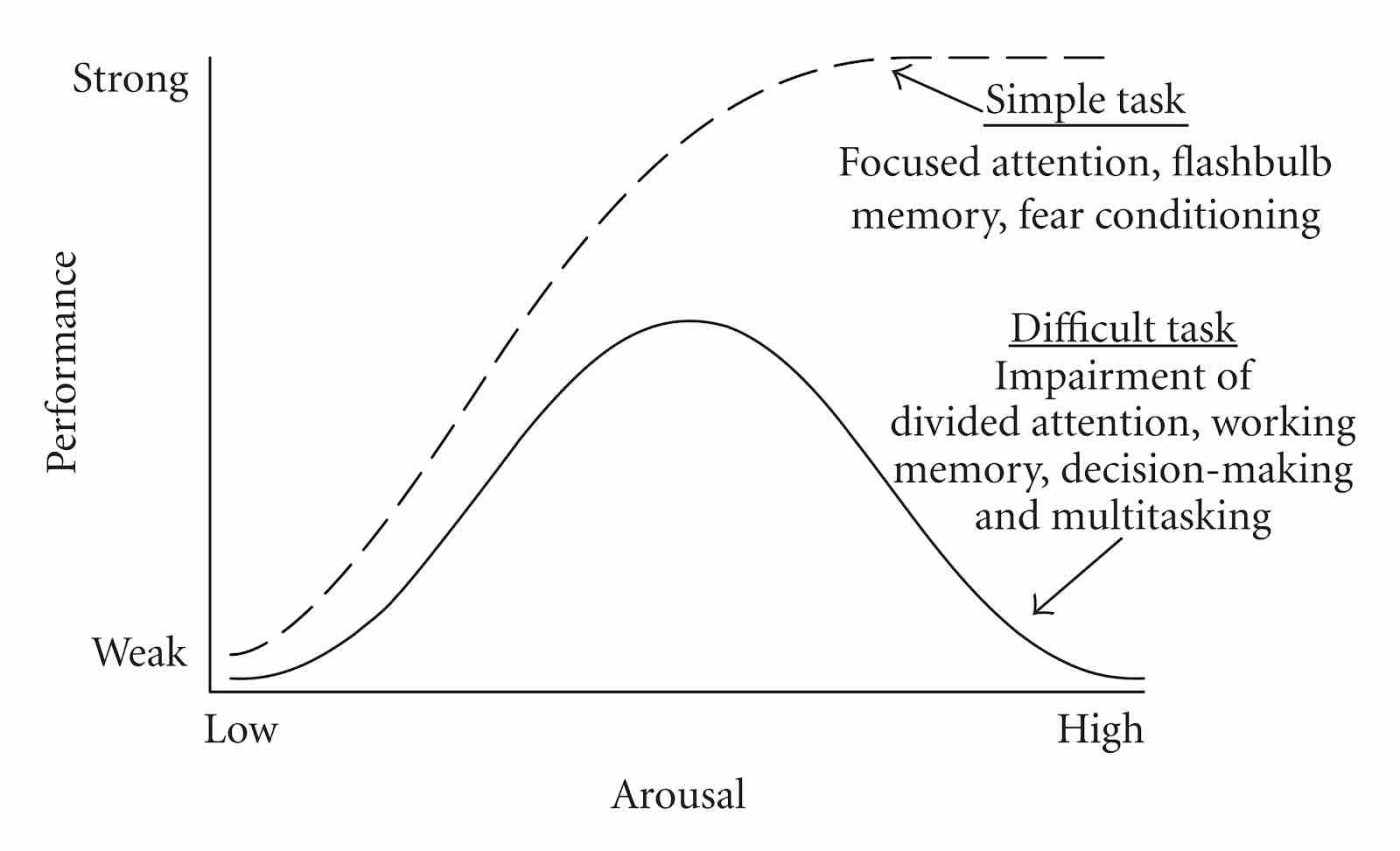 Easier tasks yield the best results when there's a higher level of stress. By contrast, complex projects don't benefit from high arousal and suffer the opposite effect. Performance is higher for difficult tasks when the level of arousal is low or moderate.

The next time you set a deadline, try setting a rush deadline for easier tasks and set your deadline far out for more difficult projects. Controlling our levels of stress this way can help us get the best stress levels, and, ultimately, the best results.

If you're struggling to meet your deadlines because you lack the motivation you need to get started on tasks, you may want to consider setting more urgent deadlines for yourself.

In a 2018 study published in the Journal of Consumer Research, researchers asked participants to complete a survey. One group was given seven days to complete the survey, and the other was given 14 days.

Guess which group completed the survey on time? The one that was given the more urgent deadline.

In another experiment by the same researchers, students were given the option of either completing a more urgent task for the reward of three Hershey's Kisses or choosing a longer deadline and getting a reward of five Hershey's Kisses. Even though they would have had more time and a bigger reward with the longer deadline, the students showed a preference for completing the urgent task.

The study concluded that there's such a thing as an urgency effect: We're more motivated to complete a task on short notice than a longer one, even at our own expense.

Longer deadlines could hinder us from getting work done because we think of them as more difficult. If we think a task is challenging, we tend to procrastinate more. This stops us from completing it on time.

Although longer deadlines cushion against underestimating the time required to complete a project, setting more urgent deadlines can give us intrinsic motivation to get things done simply because we're wired to react to a sense of urgency. 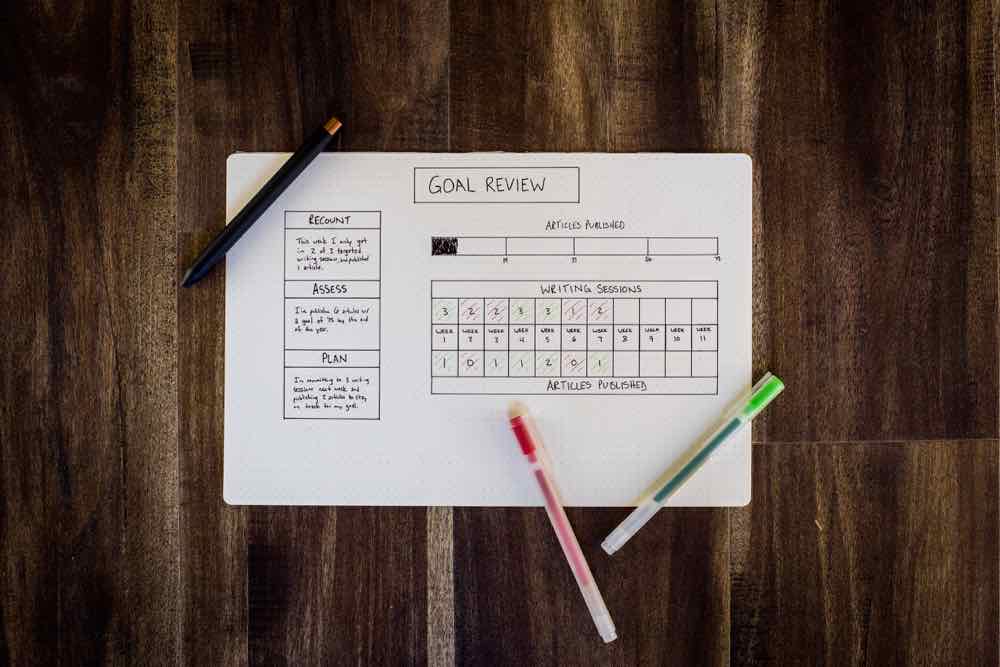 In 2015, the Association for Talent Development (ATD) did a study on accountability and found that committing to one person increases your chances of meeting a goal by 65 percent. This increases by a whopping 95 percent if you hold ongoing accountability meetings.

This is consistent with the Ariely and Wertenbroch proofreading study we looked at before. In that study, researchers found that the most effective deadlines were established by an external party. The participants who had deadlines assigned to them made fewer errors and were less likely to turn the assignment in late than people who chose their own deadlines.

Ariely and Wertenbroch concluded that while people recognize their own procrastination and try to curb it via self-imposed deadlines, these aren't always as effective as deadlines set for them by others.

If you don't have a boss or project sponsor who's setting deadlines for you, it might be worth asking someone to become your accountability partner.

For example, because they mostly work alone, freelancers sometimes form accountability partnerships with other freelancers in their field. They discuss specific actions they plan to take to further their career/business goals, then they meet regularly to discuss progress and hold each other accountable for the goals they each set.

Accountability at the workplace can be a trickier balance if there aren't obvious deadlines for your work. Who should hold you accountable? And what happens if you don't meet your goals?

In this situation, establishing a transparent culture of accountability can help. For example, consider creating a workflow that involves sharing your progress with your team on an ongoing basis.

You could hold daily stand-up meetings at the beginning of each day where everyone reports on what they did the day before and what they plan to work on that day.

Or you could use a tool like I Done This (from $5/user/month) that makes it easy to share what you've been working on with everyone else. On your team dashboard, you'll see lists of all of your team's to-dos, completed items, and blockers, making it easy to share progress with your entire team—and enlist help when you need it. 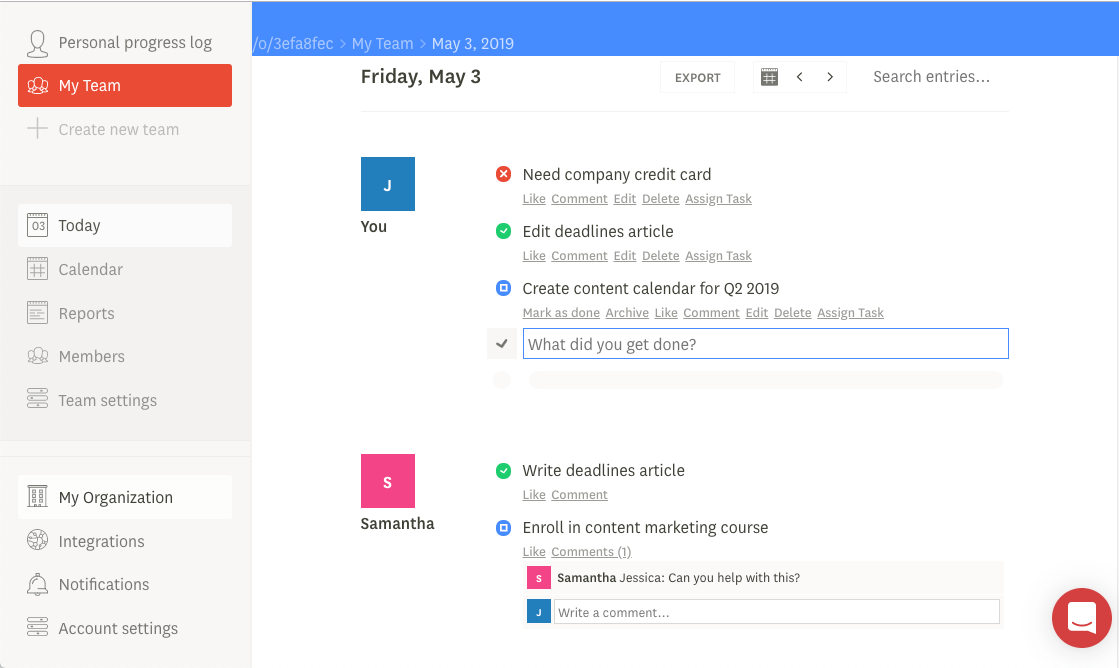 5. Turn meeting your deadlines into a game.

In a TED talk, Mihaly Csikszentmihalyi discusses "flow." In order to find your flow state—when you're so focused that you don't even notice time passing—you have to be engaged in a task that's just challenging enough that you find it rewarding, but not so difficult that it diminishes your motivation.

When we're in the flow state, otherwise known as maximum cognitive efficiency, our brain activity changes. There's an increase in the oxygenated hemoglobin concentration in our prefrontal cortex. When we're bored, this decreases.

This relationship means that it's naturally harder for us to concentrate on a task, pursue a goal, or measure progress on a project when we're bored because our prefrontal cortex is not cooperating as well as it would when we're in the flow state.

To combat this, we can apply the gamification principle to tasks we find particularly unattractive. This means that we basically turn a task into a game to make it more fun and motivating.

Have a deadline for a project you have no interest in? Try turning it into a game, complete with rewards, by using apps like Habitica (free) or EpicWin (free; iOS only). 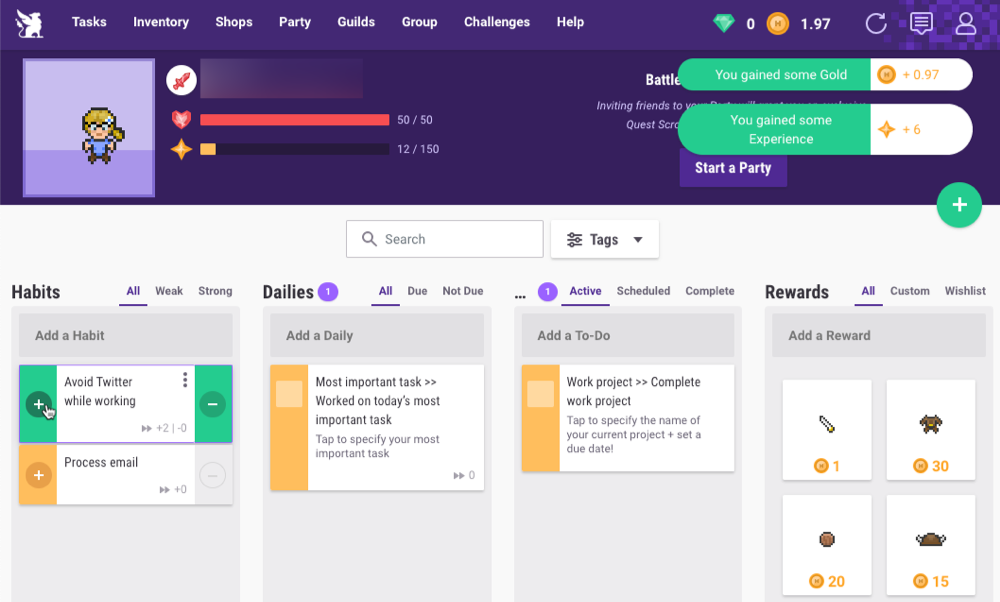 Because deadlines don't always work when we're not emotionally involved with the task at hand, finding ways to make it fun can motivate us to complete assignments on time.

There are many ways to create different kinds of deadlines that work for you based on project type and personality. Rather than a single, immovable date on a calendar, deadlines can be flexible.

Once you understand how deadlines affect us in different scenarios—short versus long, easy versus complex, fun versus boring—you can start choosing the right deadlines for each situation to ensure you meet them on time.

Loni Klara is a freelance contributor to Zapier.