When Perfect Is (and Isn't) the Enemy of Good

You've heard some version of this, whether it was in your college philosophy class or, more likely, from your Silicon Valley boss. The idea, of course, is that striving for good—or even just done—instead of perfect can increase productivity. But like most blanket statements, it doesn't always work. You don't want your surgeon to finish the operation and think, "eh, it's good enough." You don't want a structural engineer to get 80% of the way through a bridge build and decide that "done is better than perfect."

But if you're working on less life-or-death kinds of projects, as most people are, it can be a productivity boon. The key is to decide when perfect is needed, and when good is good enough.

MVP stands for either "minimum valuable product" or "minimum viable product": It's the release of a product that consists of the smallest number of features possible to provide value to users. In a perfect world, new products and features would have all of the bells and whistles upon initial release. But if you add all those bells and whistles only for the product or feature to flop, that's...not good.

Releasing an MVP—something good enough, but not perfect—allows you to get feedback earlier and start profiting from the product sooner. Let's look at an example.

One of my favorite new tools is Animalz Revive: It's a tool that helps content marketers find specific pieces of content on their blogs that are losing traffic and need to be updated. 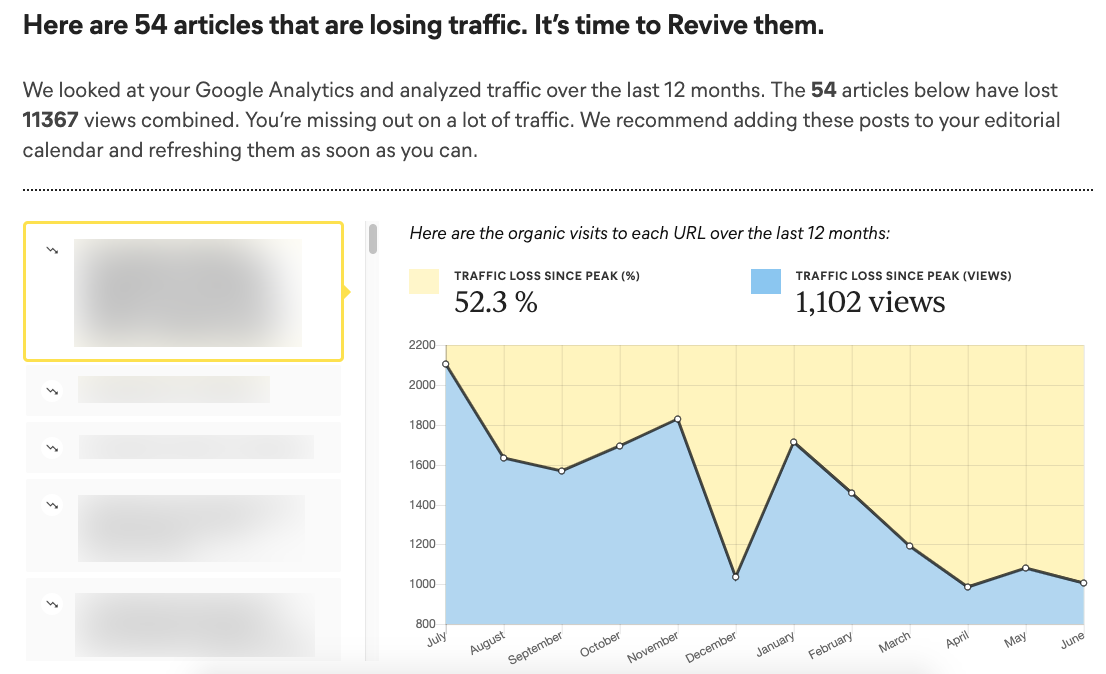 Let's say you want to build a similar tool. Building a perfect version of the product—one that connects to Google Analytics, programmatically reviews all content a site has published, and automatically produces a list of content that needs to be updated—will require two years of development work. But you're not really sure if people need or want that tool. One of the best ways to find out: release an MVP.

Maybe that means you don't automate the process at first. You have users submit requests, and for all users can tell, it's automated. But you actually have people identifying the needed updates in the background and manually populating the reports.

This would prevent you from spending lots of time and money developing a tool before you knew if there was enough demand for it. Instead, you could release a good-enough MVP and see if people want it. If so, you can move forward with building the code needed to automate the process.

Products on Product Hunt are also great examples of MVPs: A lot of them get upvotes without being perfect, beautifully designed, or even fully functional. Take the job site Hey Marketers, which has received 239 upvotes and reached the number-five product of the day in May 2019. If you look at the site, it's not perfect. Job descriptions appear as one giant paragraph. 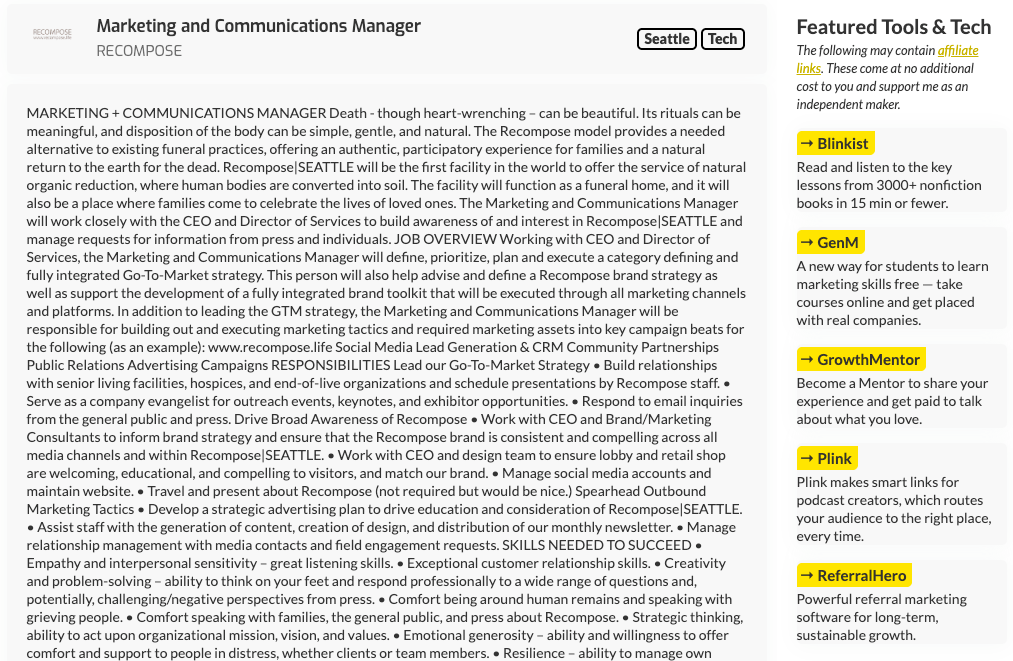 But it's not critical for the tool to be perfect right out of the gate because it still delivers value. If I'm a marketer looking for a new job, I don't have to read the job description on Hey Marketers. I can just look at the list of job openings and then go to the website for any company with an opening I'm interested in. It's not the job descriptions that necessarily provide the most value; it's the compilation of jobs from multiple sources into a single list. So as an MVP, it's perfect.

When MVP Isn't the Right Approach

In his book Lost and Founder, Rand Fishkin argues against the idea that product developers should always start with an MVP. He tells the story of launching an MVP for a new Moz tool called Spam Score. Ultimately, the decision to launch an MVP did more damage than good. 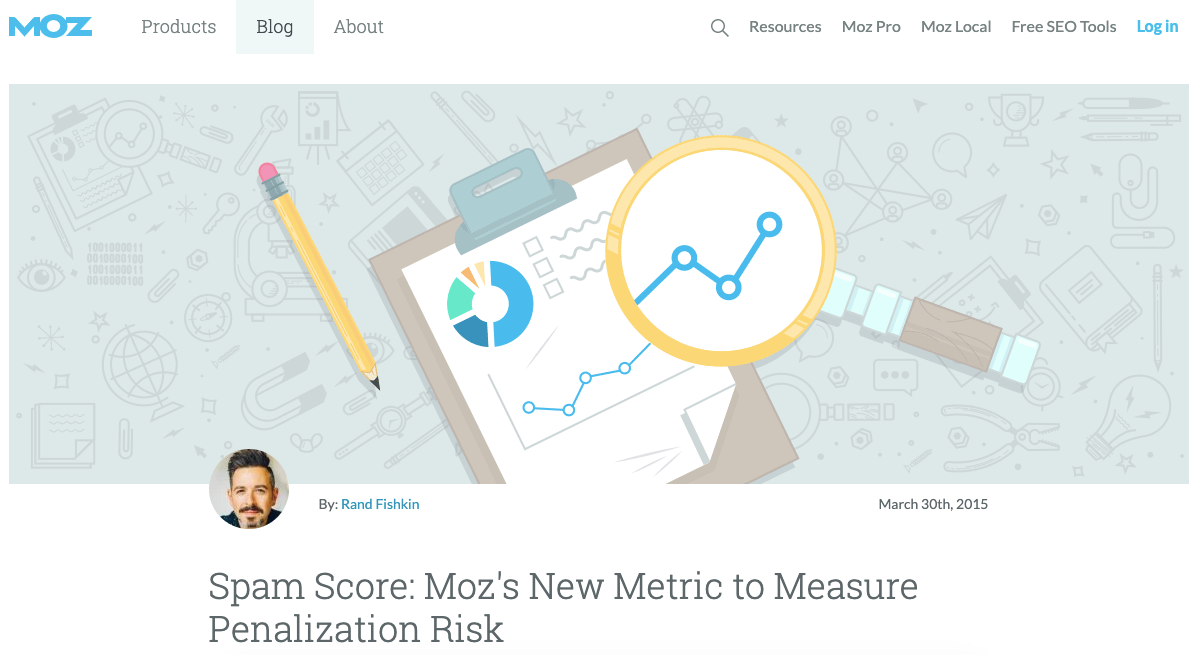 Before building the tool, they conducted extensive customer research to find out exactly what people wanted and needed from a tool of that kind. But exactly what people wanted was, as Fishkin describes, "an exceptional product." Since they didn't really have the time or resources to build an exceptional product, they built and launched an MVP instead.

Fiskin says that they spent at least $500,000 developing the tool, and it essentially flopped: "It had no observable impact on free trials, vesting rate, retention, or growth of the Moz Pro subscription overall," Fiskin writes. He concludes the story with a statement that contradicts the idea that "perfect is the enemy of good":

"Sometimes, something is better than nothing. Surprisingly often, it's not."

When Is Good Better Than Perfect?

In product development, sometimes you need to be perfect. Other times, good is good enough. Here are some questions to ask yourself when trying to figure out which you need.

Is there another product that does this thing that other people are already using?

If your product is the first of its kind—if there's nothing else out there that does what your product does—an MVP is the way to go. Putting an early version of your product out there will help you measure demand, and it might even help you find a few evangelists who will stick with your product and help you promote it as you and develop even-better versions.

Are you building a new product for a new company or an add-on product/feature for an established, well-used company?

Fishkin says that MVPs can often work really well for early-stage companies who need to test assumptions. If you can rely on a group of supportive customers who understand that the product isn't designed to be perfect yet, you can use what you learn to work toward something perfect.

But Fiskin also says, "If you've reached a certain scale, perception and reputation are huge parts of your current and future success. A not-up-to-par product launch can hurt that reputation in the market and be perceived as a reason to avoid your company/product by potential customers. It can carry an MVP hangover for years, even if you do improve that product."

So for established companies, an MVP can sometimes do more harm than good.

Can you find beta testers for the tool?

If you're an established company that needs to launch an MVP—or if you're in a competitive market where you need to take customers from competitors—a beta release may help you determine whether or not good is good enough.

If you can find some people to agree to beta test your MVP and provide feedback before a wide launch, you can find out if people believe it's good enough as-is or if you need to get a little closer to perfect first.

What are the implications of imperfection?

If something isn't perfect, what implications does that have on the end-user? Does it make the product unusable? Does it fail to provide ample value? Or does it just create minor inconveniences?

Zapier's Danny Schreiber believes that it's sometimes worth moving forward with changes—even if they create minor inconveniences—because it gives you more data on whether or not changes will deliver value.

But if your MVP doesn't really show off the value of what the user will eventually get, then it's not worth it. And in that case, it's not really an MVP anyway.

Perfect Versus Good in Other Areas of Work

As it turns out, not everyone works in product development. But the MVP mindset works for a variety of roles and situations.

In an article on Medium, Simone Michaud recommends that writers don't worry about the micro-editing (grammar, mechanics, word choice) while writing. Instead, she suggests only macro-editing while writing; that is, editing "just enough to complete an idea or sentence that makes sense."

Easier said than done, especially when you have red squigglies mocking every one of your misspellings—and even some correct spellings. To avoid getting caught up with micro-editing while writing a first draft, try turning off all of your spelling and grammar checking tools. In Google Docs, you can do this by selecting Tools, hovering over Spelling and grammar, and unchecking Show spelling suggestions and Show grammar suggestions.

When you're finished with your draft, invite the squigglies back to play.

In an article for Harvard Business Review, Aaron J. Nurick, author of The Good Enough Manager, says there are three types of managers:

To no one's surprise, he found that people preferred to work for the "good enough manager" (and the least favorite was the über manager). To be a good enough manager, Nurick says you must act as a teacher and mentor, help employees find their strengths, and give them the freedom to fail and learn from their mistakes. And letting people learn from their mistakes means abandoning perfection.

In another article for Harvard Business Review, Tara Sophia Mohr presents the results of a study she conducted trying to find out why women don't apply for jobs when they don't meet all of the stated requirements.

It's not about a lack of confidence, she says. Instead, people don't apply because they assume they won't be considered. Mohr writes: "What held them back from applying was not a mistaken perception about themselves, but a mistaken perception about the hiring process." The stated requirements often describe a perfect candidate—which, by the way, may or may not exist. It's usually more of a wishlist than a list of demands. So if your qualifications are good enough, it might mean you're a perfect fit for the job.

Sometimes, perfect is the enemy of good. Other times, good is the enemy of success. As with most things in life, blanket rules don't apply. No matter how catchy the phrase is, always think about the specifics of the task at hand before deciding what's worth perfection—and what just needs to get done.