An octopus attached to my face

I spiral when I make a mistake. This weird mental image helps.

Ever made a mistake? Me neither. Obviously.

But hypothetically, were I to make a mistake, I imagine it would prompt terrible thoughts. Things like "How could I do that?", "Am I going to get fired?", or (one imagines) "Maybe I don't know how to do my job after all."

I've been calling these "thought spirals" because it feels like you're just circling around the same few thoughts over and over.

Other people call this impostor syndrome. When I brought it up to my therapist, though, she called it something different: an octopus attached to my face. 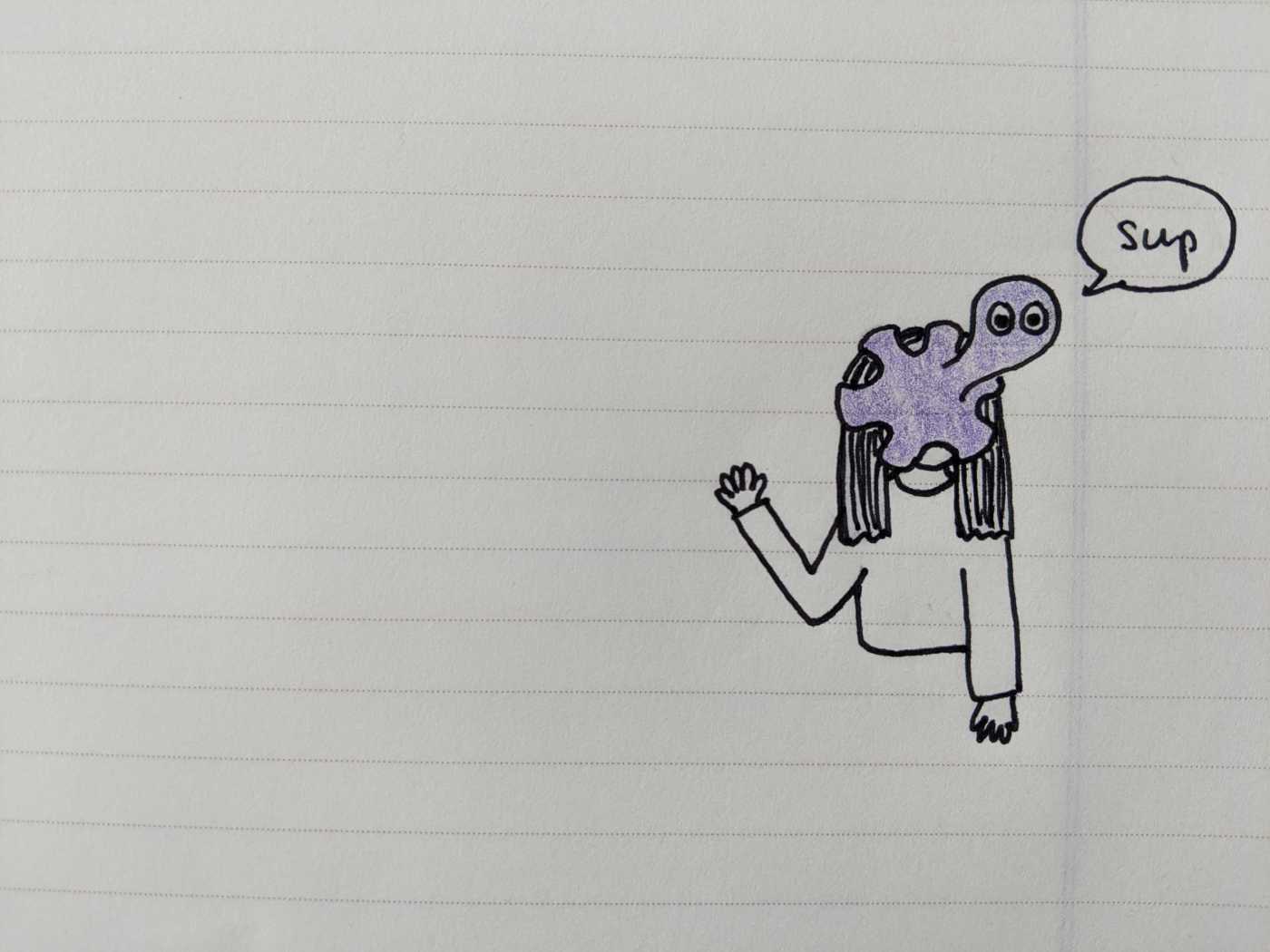 I was not expecting...that precise phrase. When she went into more detail, though, it made perfect sense: if I had an octopus on my face, I wouldn't be able to think about anything besides the octopus. To get myself unstuck, she explained, I needed to be able to get some distance and see the octopus. What color was it? What was currently happening? What was I actually worried about, and why?

Mistakes are how everyone learns (even me, apparently)

I've worked in customer support for 10 years. I pride myself on intentionally not judging teammates and customers who make mistakes or run into unintended consequences. After all, that's a core part of support: helping people who have taken some missteps. That just means they're still figuring things out, a natural part of learning.

Self-care is crucial, and it's not easy to follow through on. Here are 4 self-care workflows to get through hard times.

These moments make me realize how difficult it can be to extend that easy grace and understanding to myself. Having been at Zapier for quite a while now, it's easy to forget that making mistakes is also how I learn—and, surprise! That doesn't stop happening just because I've been here a while.

This idea that making mistakes helps you learn is an integral part of Zapier Support training. While of course there is training on how the product works, the emphasis is really on replying to as many tickets as possible at first, rather than trying to learn absolutely everything up front. The expectation is that, yes, you're definitely going to screw some things up. You're going to feel weird and uncertain most of the time. But the more actual questions and situations and Zaps you see—and the more mistakes you make—the more you discover how things work. And the more you get comfortable with acknowledging when you don't know something and asking for help.

It also builds up psychological safety. You make a bunch of mistakes, and no one freaks out—generally even customers are pretty understanding. It might be scary, and uncomfortable, but it also trains you to give yourself space not to be perfect.

Unfortunately, over time, you do figure most things out. You start chugging along, expecting to know how to handle nearly everything that comes up—and get totally blindsided when you inevitably do make a mistake.

The original training idea still stands, though: mistakes don't mean I'm bad at my job or that I'm going to get fired. They just mean that I'm not 100 percent perfect 100 percent of the time (I know, I'm surprised too). They mean I'm still learning, and that's something that I generally love about working at Zapier: the learning never stops.

Worrying about a mistake isn't going to somehow proactively keep it from happening in the future. Leaning into learning is a much better strategy. I need to make sure I fully understand what happened, and why, for next time.

In order to learn from your mistakes, you need to be sure you're tracking them. Here are a few ways automation can help you handle criticism—whether that criticism comes from you or from someone else.

Ok, we've disabled one part of the octopus. On to the next: no one else ever makes these mistakes.

"No one else ever makes these mistakes"? This sounds like run-of-the-mill impostor syndrome.

Impostor syndrome: "anxiety or self-doubt that results from persistently undervaluing one's competence and active role in achieving success, while falsely attributing one's accomplishments to luck or other external forces."

Essentially, you feel like you're an impostor in your current role, and you're just waiting for everyone else to realize you don't know what you're doing.

This could be a whole article all its own. In short, though, there are a few different ways to combat impostor syndrome when it rears its ugly octopus head.

First, in theory, you know "no one else makes mistakes" is totally false. When you're in the throes of self-doubt, though, it's hard to recognize that. One way to debunk this idea is to be open about your own mistakes. For example, I wrote about my own mistakes for this situation in our internal blog (and now I'm blasting it out to the world—yikes). I was surprised by how many folks immediately responded to my internal post with empathy, sharing stories about their own mishaps in similar situations. That made it really difficult to continue beating myself up. Evidence that I'm not alone was staring me in the face.

Putting yourself out there gives others the room to share their own mistakes without fear of judgment—after all, you've already shown you're not perfect! It helps create a working culture of being open about what you're still working on. If no one's sharing their mistakes or learning, that's a problem. Either no one's learning anything, or no one feels safe enough to share.

On another note, we know that often mistakes aren't the fault of an individual—they're a failure of the system to provide adequate guardrails. That can also be a helpful way of looking at a mistake: reframe it to yourself as, "Great! I tested the system and it broke. How do we fix it?"

Another way to put this: what could be changed about your system, documentation, and processes to make sure no one has to worry about making this mistake again because they can't? How can you set up others on your team, and your future self, for success?

Pry the octopus off

With all this context, we can see this octopus causing us so much trouble: it's made up of fear of making mistakes and impostor syndrome. Knowing that, we can make a plan. Not just "get this octopus off my face" or "stop worrying"—we already know that's not enough. Rather, a plan to systematically disable the octopus and hold it at arm's length. For me, this usually looks like talking or journaling to myself like I'm a frustrated little kid:

I'm feeling guilty and embarrassed about this mistake, and worried my coworkers and boss are going to think less of me. That's not unreasonable to feel—mistakes are scary—but it's also not the be-all-end-all. I didn't know to avoid this, and now I do—I learned something! I can ask my coworkers for tips to avoid this in the future and document this better so no one else makes this mistake, or even suggest a system update to prevent it from coming up again.

I even wrote out a script that I keep on my desk for situations like this:

To be honest, at first, this whole octopus image struck me as funny. Personally, I've never had an actual octopus stuck to my face, and I don't plan to (barring an unexpected career change). But I've been telling people about this mental image, and a coworker accurately pointed out that it's a scary, suffocating image: how can you breathe, or do anything, with a whole octopus on your face? When you're consumed with fear and anxiety, how can you even think about anything else—much less do your job, be a good friend or partner, and all the other things we need to do on a daily basis?

We have to give ourselves space to breathe, hard as that may seem. Name your octopus. Hold it out, look at it, and put it down. Take a deep breath, and keep moving.

Katie Redderson-Lear is an App Integrations Engineer at Zapier based in Portland, OR. She loves technology, learning, and good documentation, and is an unapologetic linguistics nerd.