How to respond to negative reviews from your customers

Admit you need to do better, then actually do better.

You only get one first impression, and for small businesses today, that's Google. Your star rating—and the reviews below it—are the first thing any would-be customer notices online.

This is why negative reviews can be so devastating—especially when you know you could have done better. It makes sense that small business owners, already under a lot of stress, may default to justifying or explaining what happened.

Stewart Guss, a personal injury lawyer with over 300 ratings on Google and a 4.8 star rating, suggests a different approach.

"It's so simple," he told me. "Have the owner, or one of your top people, pick up the phone, call the client, and fall on your sword. Do a mea culpa." Admitting that you're wrong isn't easy, but it's the best way to respond to a legitimate negative review.

It's worth thinking about why people leave negative reviews. Brent Thurman, who runs Keystone Insurance in Provo, Utah, thinks of the negative review as the last resort.

"People want to be heard," he told me. "They're not doing it because they're an anonymous third party trying to give honest reviews about service. It's because they're pissed, and they want there to be public consequences for that business."

"Negative reviews are a cry for attention," he told me. "If your customers are leaving two or three messages, and you're not getting back to them, the fourth message will be a negative review on Google."

Any legitimate negative review, then, is an opportunity to learn how to be better—how to avoid upsetting customers to the point where they feel like they have to take that step.

"The best advice that I can give anyone is obvious but needs to be said: provide excellent service," said Stewart. "Make sure you're doing the right thing for your customers. Return calls. A lack of communication is the number one cause of negative reviews."

Every negative review is a chance to relearn this lesson.

Focus on the relationship, not the review

Understanding why customers are leaving negative reviews doesn't help you get those reviews taken down. And, according to Stewart, the review should never be your focus—the customer should be.

"We will never ask someone to change a review, or pull a review," he told me. "What we will do is ask them for another try, to hit the reset button on our relationship. We ask them to give us an opportunity to show them who we really are."

This focus is important, according to Stewart, because it ensures people don't think you're being transactional. That's part of why Stewart suggests picking up the phone or emailing the client before responding to the review on Google.

"Say, I hear you, I get it, I don't like that you're upset, but if I were a customer, I would be upset too," Stewart told me. He also suggests thanking the customer for leaving the negative review. "Outline the specific things the review taught your company," he said, "and how you will change your process going forward."

Stewart told me he's had success turning around reviews this way—customers will sometimes take them down after the issues are addressed. But he never pressures them to do so. "There's never an ask," he said. "We call to apologize for dropping the ball. That's it."

The reviewer isn't the audience—future readers are

Sometimes you won't be able to contact a customer directly, which means you'll have to write a response on Google. In those cases, it's important to think about your audience.

"I'm talking to the person who will read the review later, not the person who left the negative review," Brent told me. "If you're not kind to customers who leave a one-star review, it makes you look like you're the one with egg on your face. Your reaction will tell others how you are to work with." 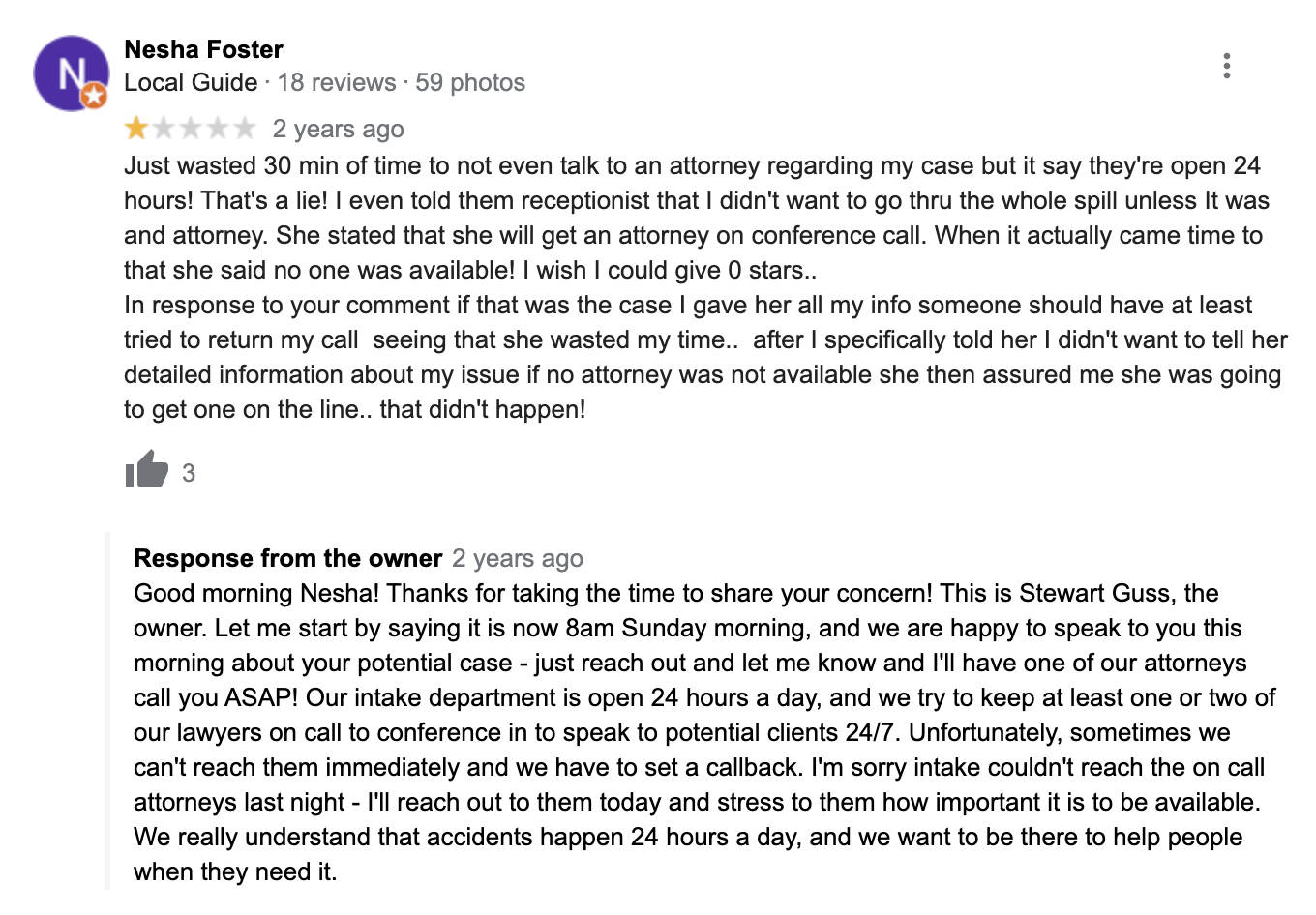 Google makes it easy for people to find these one-star reviews, even if you mostly have five-star ones. Your audience is those readers.

"If people take the time to read an individual negative review, they will probably take the time to read your response," said Stewart. "If you're concise and do the mea culpa, people will be more inclined to work with you. You want to sound like the kind of business that, when you drop the ball, will do the right thing."

A case of mistaken identity

What if a negative review is clearly fake, or intended for some other company? You still can't respond with anger, says Jason Brown of ReviewFraud.org.

"When a business replies in an angry and insulting manner, the business typically goes viral, as the person who left the review will post the reply on social media," Jason told me. "Potential customers will judge a business more by the reply and less by the review."

It's one thing to know this. It's another thing to actually manage it.

Brent's local, independent agency ranks fairly highly in searches for a particular insurance they happen to sell, which leads to some mistaken identity cases. "People see us coming up in search results for that larger company, and leave us negative reviews intended for them," he told me. "We would get customers of other insurance agents leaving reviews on our page." This is obviously frustrating.

"The knee-jerk reaction is to rail on the person, publicly, and correct them." he told me. "But I think that's the biggest thing to stay away from." Instead, Brent takes a different strategy. "I try to make it clear that this is a case of mistaken identity," he told me. "And then I offer to help anyway."

Offering to help is crucial. First, Brent tells me, he's never been able to get a negative review like this taken down unless he managed to get in touch with the customer, and offering to help is one of the few ways to get in touch with someone who isn't in your customer database. And especially in this case, the person leaving the review isn't the main audience you need to think about while drafting responses.

"Your audience is the next thousand people who will read that review and your response," Stewart told me. "So what you want to do is listen—and validate." This isn't always easy, according to Stewart—particularly when the review is clearly false. But it's essential that you keep the wider audience in mind and try to respond in a way that reflects well on you. "Being able to express your concern, even when someone is metaphorically kicking you, is really key."

Sure a review is fake? Report it.

Some reviews, of course, are straight-up fake. Stewart told me he's dealt with both negative SEO and former employees leaving reviews out of spite. He's had some luck in getting those removed.

"One technique we've done is report the issue to Google," he told me. "Then I'll ask coworkers or colleagues to also flag that review. Every once in a while Google pays attention."

Of course, Google isn't always quick to respond to reported reviews. Joy Hawkins, a consultant who helps small businesses navigate Google reviews, told me it's worth following up in public. "My suggestion is always to use the Google My Business forum to get a second opinion if Google is refusing to remove reviews that you think violate their guidelines," she told me.

The reviews might not come down as quickly as you'd like, or in some cases at all. That's why it's important to also respond, and to think about the broader audience while you do so.

Dealing with negative reviews is exhausting. You're going to have an emotional response, and that's ok. But sometimes that's going to lead to reacting with anger, which is why Stewart recommends giving yourself time.

"Part of your negative review response strategy has to be patience," he told me. "Whether it's taking a couple of hours to cool down so you can write a more appreciative response, or waiting until you can reach the client on the phone or via email so you can have that conversation with them, you sometimes need to let it go for a few days."

Responding to negative reviews with more negativity isn't productive, so it's worth doing whatever you have to do to calm down. "You have to make sure that you have the patience," said Stewart. "Stop, have a cup of chamomile tea—or whiskey."

Easier said than done. But necessary. Give yourself space before diving in.