Dark mode is everywhere. All the major operating systems—Android, iPhone, Windows, and macOS—now offer dark themes, which default to light text on a black background. It looks really cool, and tech companies are arguing that dark mode will improve the time you spend at a screen.

Apple says that dark mode "makes it easier to stay focused on your work." Microsoft says dark mode can "reduce eye strain and improve battery life." Google says it "improves visibility for users with low vision and those who are sensitive to bright light." The marketing message got through: people want this.

Developers are rushing to offer dark versions of their apps, and people get excited when an app like Slack offers a dark mode. But do the benefits of dark mode live up to the hype? Let's dig into some research.

The backlash against dark mode arguably started with Adam Engst's extremely detailed article for TidBITS, which argues that light text on a dark background is objectively worse than the traditional black on white.

Except in extraordinary situations, Dark Mode is not easy on the eyes, in any way. The human eyes and brain prefer dark-on-light, and reversing that forces them to work harder to read text, parse controls, and comprehend what you’re seeing. It may be hip and trendy, but put bluntly, Dark Mode likely makes those who turn it on slower and less productive

To summarize: there are very few contexts, in the natural world, where bright things show up against a dark backdrop, and this shaped how our eyes evolved. Engst again:

Humans evolved outside, and we are generally active during the daytime and asleep when it’s dark. What we care about are the objects in front of the background, whether food, tools, predators, or whatever. Those objects are by definition darker than the background because they’re illuminated by the sun, or indoors, by whatever lights may be on.

Research shows that this has consequences. A Wired article mentions research by Susanne Mayr, a researcher at the University of Passau in Germany. In six different studies she found that subjects have a higher reading comprehension while reading black text on white backgrounds.

They detected more errors and/or read faster when dark text was presented on a light background than under reversed conditions.

Dark mode is also objectively worse for people with astigmatism, an eye condition which is surprisingly common. Jason Harrison, then a postgraduate researcher at the Sensory Perception & Interaction Research Group at the University of British Columbia in Canada, wrote about this:

People with astigmatism (approximately 50% of the population) find it harder to read white text on black than black text on white. Part of this has to do with light levels: with a bright display (white background) the iris closes a bit more, decreasing the effect of the "deformed" lens; with a dark display (black background) the iris opens to receive more light and the deformation of the lens creates a much fuzzier focus at the eye.

I found plenty of studies like this, which suggest that dark mode would, if anything, make you less productive. Which is part of why designers switched from the light-on-dark interfaces in the early age of computing (think MS-DOS, or UNIX terminals) to the dark-on-light interfaces most of us know today.

None of this is to say that you shouldn't use dark mode, assuming you like it. It's just to say that research suggests that, for most people, it won't result in a productivity boost, and if anything it might make you slightly less productive. But is dark mode helpful in other ways?

Most companies claim that dark mode can save battery life, and that doesn't sound ridiculous. Dimming a lightbulb uses less energy, so why wouldn't darker screens work the same way?

The truth is a little more complicated: dark mode really can save battery life, but only if you're using a premium device with an OLED display.

This is because backlit LED screens, which are still found in most computers and phones, don't actually use less energy to project black. This is why even totally dark scenes in a movie or game can still light a dark room.

This is changing, however, because of OLED, which is a new kind of screen that's currently only offered in premium devices. On these displays black pixels actually cast no light. OLED displays are expensive, meaning only premium products offer them. The iPhone 11, for example, does not have an OLED display—only the more expensive iPhone 11 Pro does. Android phones are similar: only the most expensive Android phones, like the Samsung Galaxy Note 10, offer OLED displays. Any phone that costs less than $1,000 probably doesn't have an OLED. And as for computers? No laptops from Apple, and hardly any PC laptops, use OLED displays.

If you happen to own a device with an OLED display, great! Dark mode can extend your battery life. For the vast majority of people, however, this isn't the case, meaning this is only a compelling reason to use dark mode for a small minority of people.

You might just end up wasting more time on your phone

Regardless of what the science says, you might find dark mode more comfortable than light mode—especially at night. That's a valid reason to use it, but keep in mind: this might mean you end up reading your phone late at night when you should be sleeping.

Arielle Pardes, writing for Wired, points out that there's research behind this.

Twitter, for example, found that users spent more time in its app when dark mode was turned on. You can scroll on and on well into the night without disruption. You're less likely to notice that your eyeballs have dried out from staring into your screen.

Again: not noticing that your eyeballs have dried out is more comfortable than the alternative. But if it leads you to scrolling when you should be sleeping or focusing on something more important, dark mode might actually derail productivity—not help it.

What if you like dark mode? Use it anyway.

You might be wondering, given the above information, why so many people are excited about dark mode, and so many apps are working to support it. I think a lot of this has to do with aesthetics. Dark mode looks really cool, and that makes people happy. To me, this is reason enough to use it, even if there are potential downsides. My friend Chris Hoffman of How-to Geek put it well:

If you don’t like dark mode, don’t use it. Yes, it’s trendy, but it’s not necessarily easier on your eyes. In bright environments, light mode could be easier on your eyes and make you more productive. If you do like dark mode, use it! Even in a light environment, if you prefer that look and don’t have trouble reading your screen, go ahead and use dark mode. There’s more to life than chasing small incremental improvements in theoretical productivity.

I couldn't agree with this more. If dark mode makes you happier, or even just makes you feel like you're more productive, you should use it. Just don't think you're getting some massive productivity boost.

Dark mode is great in low-light environments, but less so during the day. One compromise is to use light mode during the day and dark mode at night, so here's how you can do that.

The latest version of macOS and iOS can automatically switch to night mode at night. Mac users can, as of macOS 10.15 Catalina head to System Preferences > General*.

You can also do this on your iPhone or iPad, assuming you're using iOS 13 or iPadOS 13. Head to Settings > Display & Brightness, then toggle Automatic. 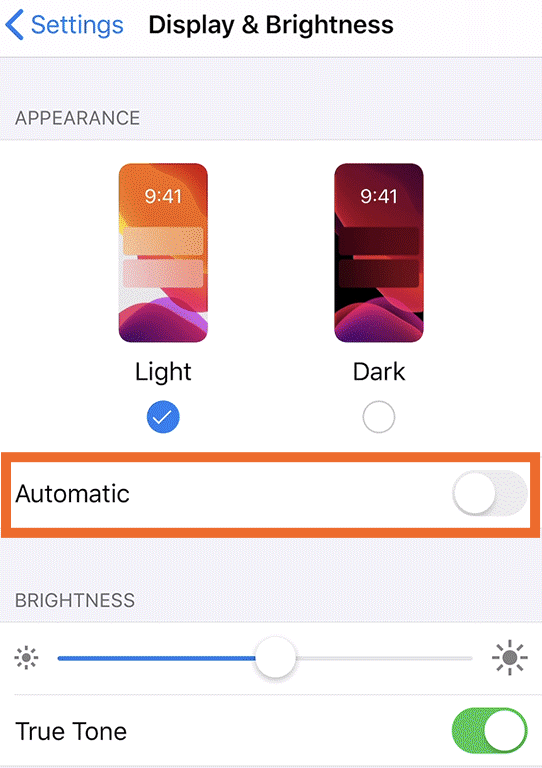 What about the non-Apple platforms? Android doesn't currently offer scheduling, but a free third party app called automatic dark theme can automatically switch between dark and light mode. Windows also doesn't offer scheduling, as of this writing, but an open source app called Windows 10 Auto Dark Mode can do the job for you.

Set this up and you'll use light mode during the day and dark mode at night, which honestly might be the best of both worlds. Enjoy.