The work you get to do is the important stuff: planning a robust, exciting, engaging communication plan that isn't an afterthought to endlessly importing email addresses.

So now, your main job is sending engaging emails that'll actually get noticed. "The work you get to do is the important stuff: planning a robust, exciting, engaging communication plan that isn't an afterthought to endlessly importing email addresses," says Christopher Walker, director of the office of graduate admissions at the Maryland Institute College of Arts. That's the fun part—but it still can be tough.

The most important things in your email marketing are consistency and authenticity, along with feedback from your readers and experimentation. In closing, here's some quick pointers on how to achieve all of them in your email marketing, and hopefully keep the emails coming without burning out yourself and your team.

Just as your social posts can quickly get drowned out by everything else being shared, your emails will also be surrounded by more important messages—and you'll want yours to stick out. For that, Neil Cybart recommends finding your own voice, and being persistent.

"I think the most important thing with producing a daily email is having passion in what you are writing because this enables you to develop your own voice," Neil said. "Having confidence that your level of knowledge or experience gathered over the years in a particular subject or field can provide readers with value they wouldn’t be able to get elsewhere is a key aspect of producing a vibrant daily email." 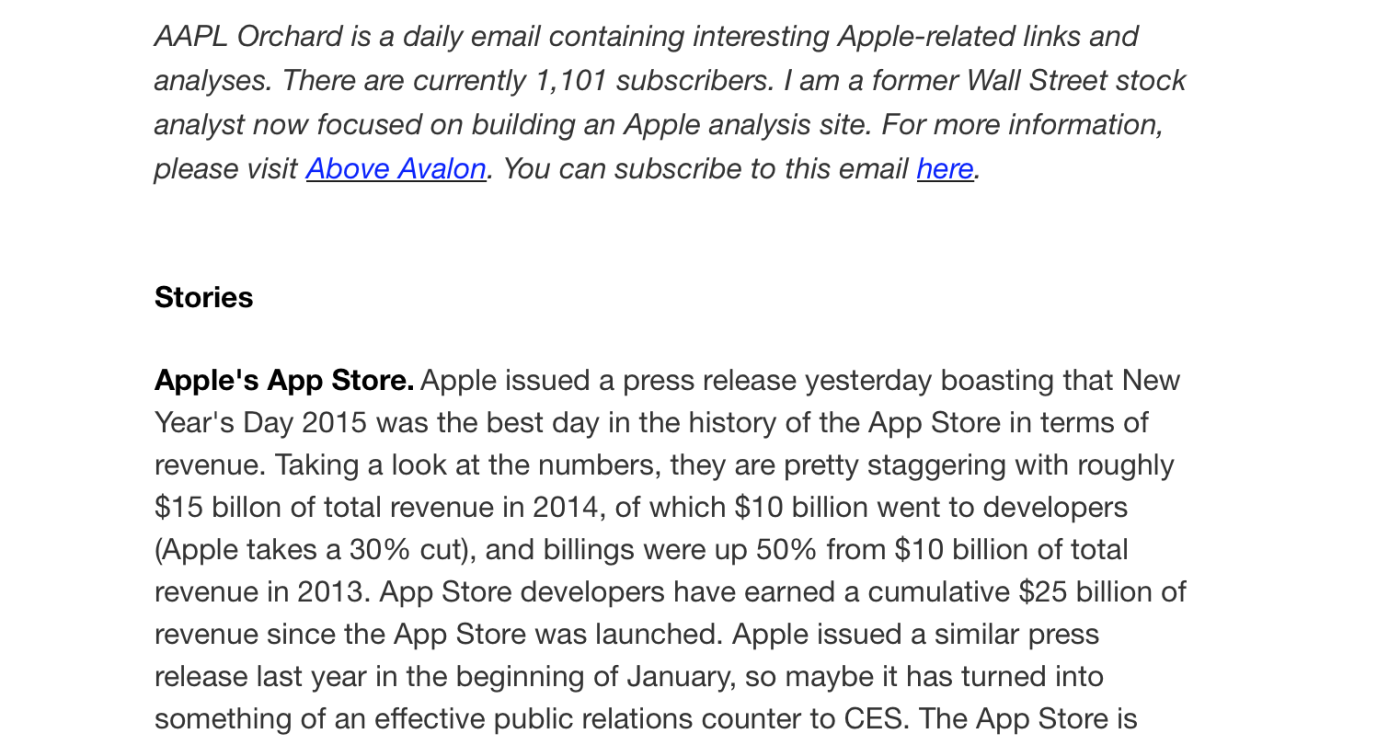 AAPL Orchard with its simple analysis of Apple

Want your emails to be read? Techcrunch's Jon Russell says that with email marketing, consistency is the secret—just as with any other online publication efforts. "You need to be disciplined about publishing regularly, but that's just like YouTube, blogging and other kinds of online media," says Jon.

Drop the consistency, and your email list will quickly become forgotten—and your name won't jump out at people when they see your messages in their inbox. "If you’re patchy, your audience will suffer and people will become less inclined to open your emails," says The Next Web's Owen Williams.

But don't worry way too much about what your emails say. Feel free to experiment: just be authentic and consistent. That's how Kale Davis approached his Hacker Newsletter, until he found the format that worked best for his readers. "I think of each issue as an experiment, and over time you'll get a sense of what works and doesn't," he explained.

And, of course, don't forget to be open to feedback. Private feedback is only a reply button away, so encourage people to let you know their thoughts about your emails. If you're sending too many emails, or the messages aren't relevant enough, people will tell you—and then, you can thank them for their input and tweak your emails to be better next time.

Owen Williams has found this to be one of the most important parts of his experiments with email newsletters. "If you’re building an email newsletter, ask for feedback from your subscribers," says Owen. "When sending out your weekly update, put a note at the bottom asking for people to reply if they have feedback. You’ll be surprised by how many actually love to have a say."

Put it all together, and you'll realize your best option is to jump right in, start sending emails regularly, and tweak as you go. Automate your processes as much as you can, and you'll have time to put back into your email's content. You'll get feedback to incorporate, will find your own voice along the way, and with any luck your emails will become popular enough that people will be excited to have them show up in their inbox.

That's how you can not only achieve the impressive stats at the beginning of this article, but perhaps even surpass them. All with just a lowly email, the one internet communication medium that's stood the test of time.

Your friends at Zapier.