Automate intensive workflows with a few keystrokes, and turn your most common actions into one-key shortcuts.

Keyboard shortcuts are great—they save you a few seconds each and every time you use them. And if you use them often, that's a lot of seconds saved. But there's one problem: just because they're shortcuts, doesn't necessarily make them better. Which is why I heavily rely on an app called Keyboard Maestro.

Even some of the more practical keyboard shortcuts still require some dexterity. In Slack, Command+G brings up the search bar to find a past message, which I do often. But trying to hit that key combo with one hand—at least with my small hands—is like playing a game of Finger Twister. (Yes, it's a real game.)

Granted, there are a lot of keyboard shortcuts that are dead easy—Command+C and Command+V are about as simple as it gets. But even then, why hit two keys when I could just hit one? And what other possibilities are there for one-key macros? This is where Keyboard Maestro and my keyboard's numpad make an epic duo.

What is Keyboard Maestro?

At its most basic, Keyboard Maestro is a tool for creating all sorts of shortcuts and macros for automating stuff on your Mac. Open a website, copy files into a specific folder, or launch an application, all with keyboard shortcuts or other triggers. You can have stuff automatically happen when you quit a certain application, when a file is moved into a particular folder, or even when you draw a certain gesture with your mouse or trackpad. And that's really just scratching the surface.

It's not free, but at $36, it's frankly a steal for the capabilities it gives you. Plus, it already does what a lot of other apps can do. (It's already replaced TextExpander and Magnet for me.)

If you're looking for free options, Karabiner-Elements and Hammerspoon are decent open source alternatives. And there's Apple's built-in Automator feature that will soon be discontinued in favor of Shortcuts. None of these truly compare to Keyboard Maestro, in my opinion, so if you can shell out $36 for it, it's well worth it.

If you're looking for something on Windows, AutoIt and AutoHotkey are probably the closest alternatives, but they're kind of script-y and aren't as intuitive as setting up triggers and actions. There's also FastKeys, but it's not quite as expansive as Keyboard Maestro.

How to get started with Keyboard Maestro

Once you've downloaded and installed Keyboard Maestro, open it up, and you'll be greeted with some pre-installed shortcuts and macros that you can try out. But you probably want to make your very own custom shortcuts, so here's how to get started creating a very basic one.

We're going to create a shortcut that will launch the Zapier home page by pressing Command+Option+Z. To start, click the small plus button at the bottom of the second column in the Keyboard Maestro window. 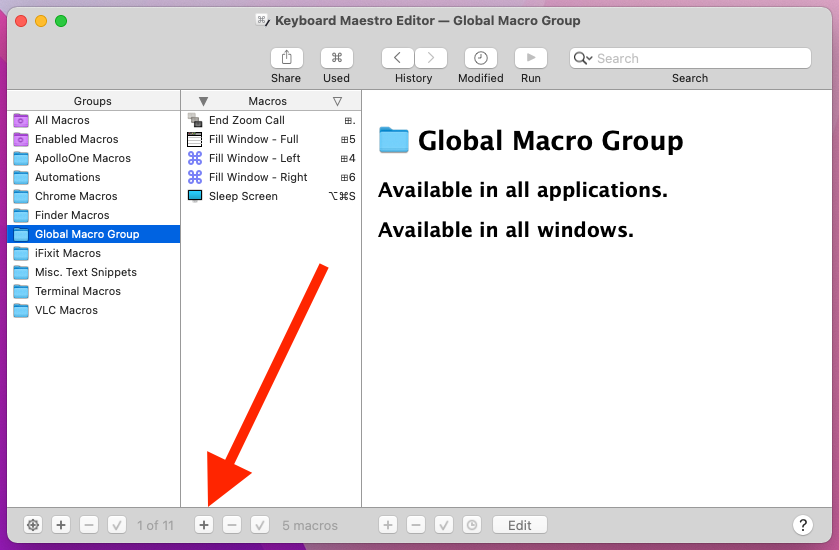 Give the shortcut a name, like "Open Zapier.com," and then click New Trigger. This is the thing that needs to happen first in order for the action to occur. 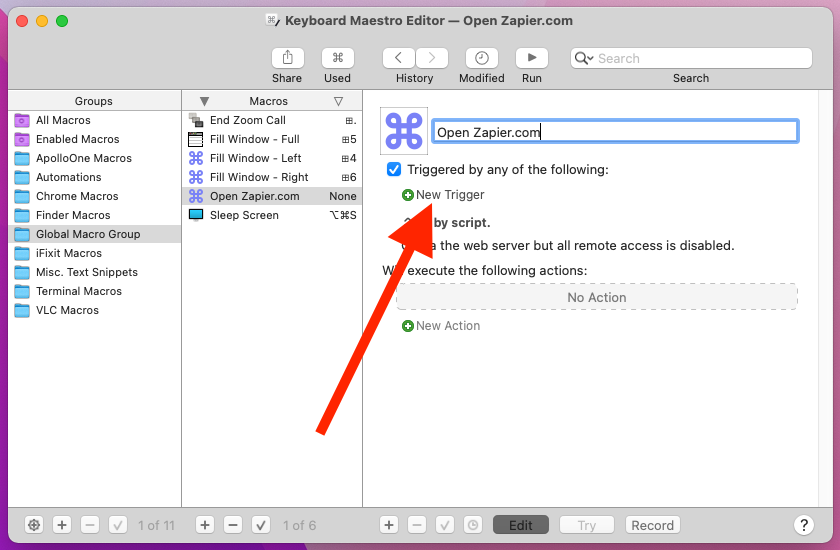 Select Hot Key Trigger from the list, and type in the shortcut you want to use. In this case, I'm using Command+Option+Z. 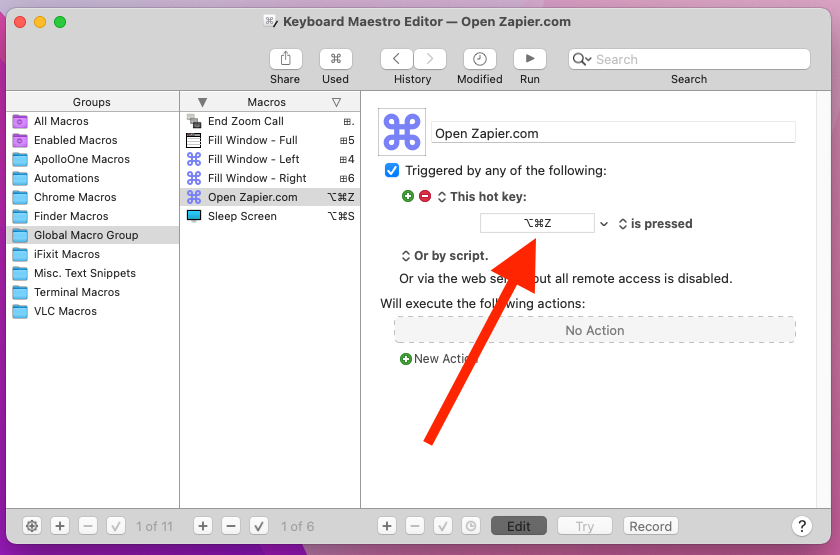 Now, click New Action. This is what will happen when I hit Command+Option+Z. 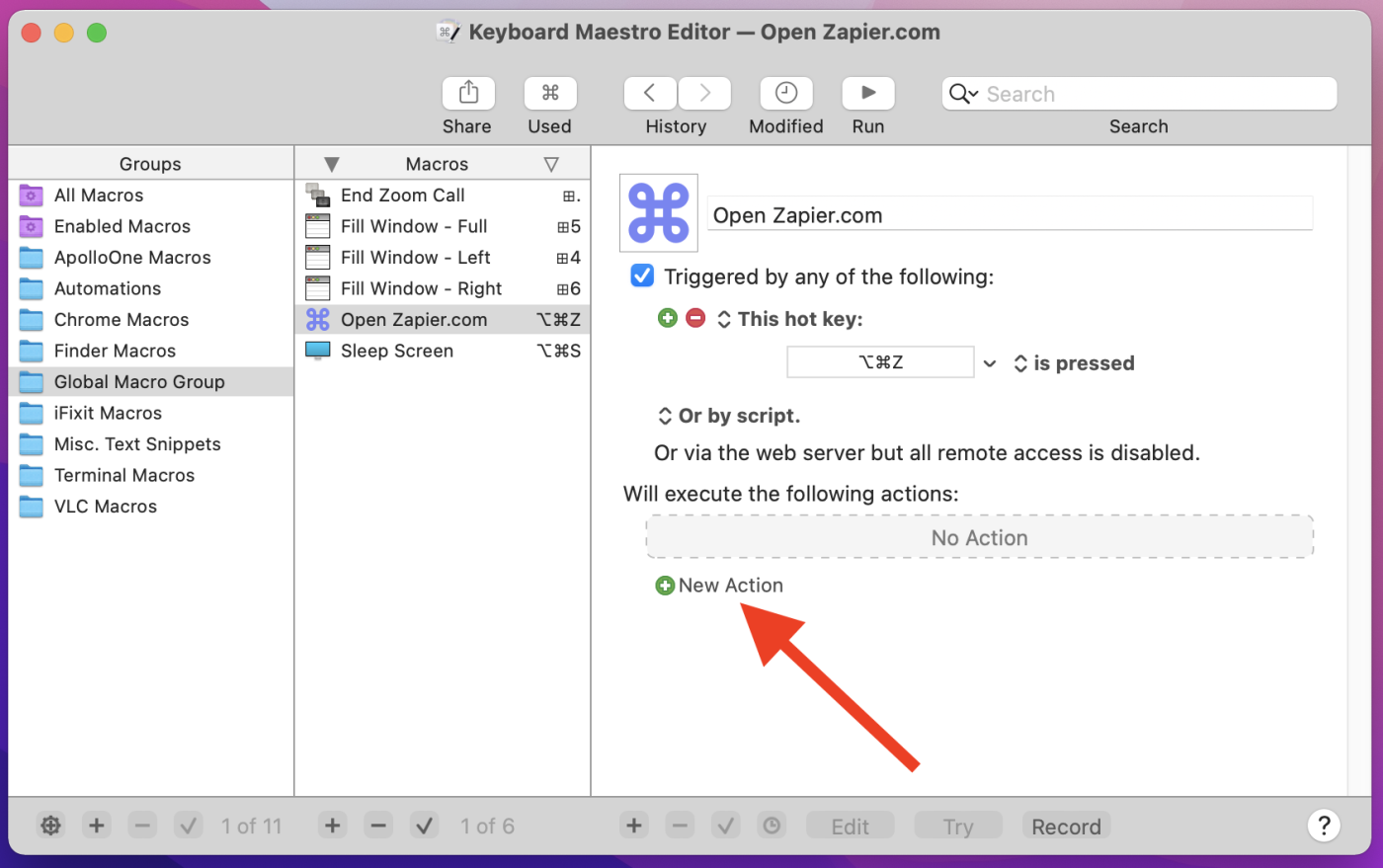 A huge list of actions to choose from will appear on the left side. I want to open a URL (zapier.com). I could scroll and look for it in the list, but I'm going to search for it using the search box at the top by typing in "URL" and then selecting Open a URL. 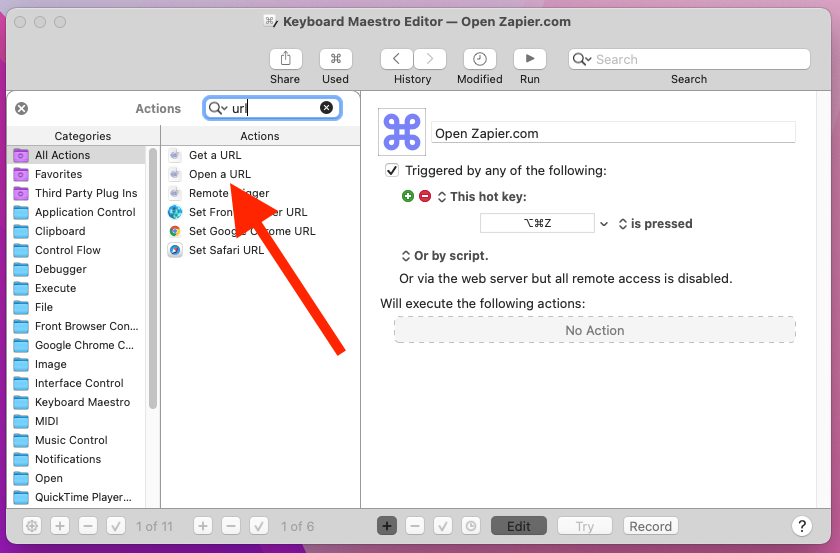 A new box will appear to the right where you'll type in the URL. In this case. "https://www.zapier.com." And yes, you need to include the https:// for the shortcut to work. 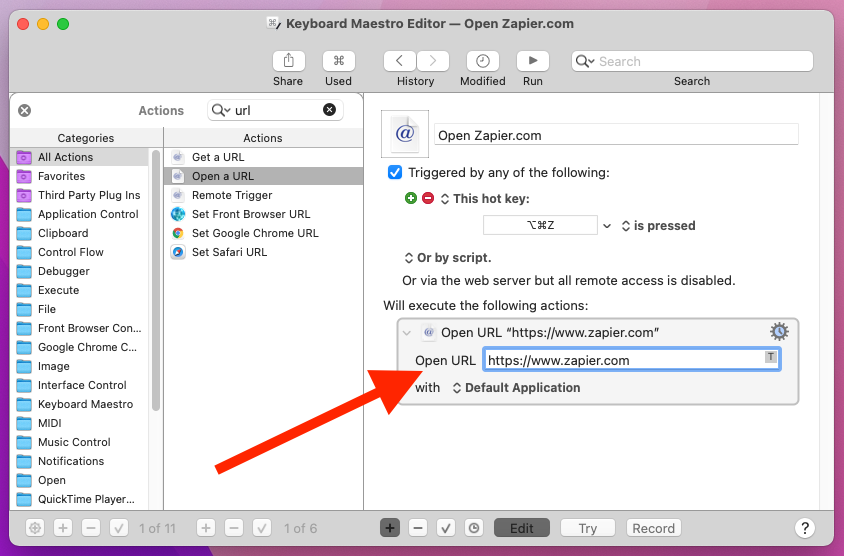 That's it! Give it a try. Hitting Command+Option+Z will open a new tab in your default web browser and take you immediately to the Zapier home page.

This might not be the most useful example, and it's just the very tip of the Keyboard Maestro iceberg. But it should give you a better idea of how Keyboard Maestro works so that you can go out there and create your own shortcuts and macros.

How I use Keyboard Maestro

To give you an idea of the possibilities, let me describe one keyboard shortcut I have set up. It's for when a client emails me store numbers and I need to ship items to those stores.

The shortcut brings up a window where it asks for the store number. After typing that in and hitting Enter, Keyboard Maestro opens up a new Chrome tab, performs a store number search on DuckDuckGo, clicks the first result (because it's always the first result), finds the store's address on the page, copies it to my clipboard, and then closes the Chrome tab. From there, I can paste the address wherever.

All of that happens with a simple keyboard shortcut.

That's one of the very few intensive macros I have in Keyboard Maestro. Most of my shortcuts and macros accomplish more basic tasks, but they're still really handy. The kicker, though, is using my keyboard's numpad as sort of a built-in macropad, a part of the keyboard that I wouldn't use otherwise. Keyboard Maestro can differentiate between a number key along the top row and a number key on the numpad, so it works out great for one-key macros.

Here are some shortcuts and macros I've set up, all of which happen with the tap of a single key:

If you'd like the macro file for any of these, hit me up and I can share it with you. But more importantly, I hope this gives you some inspiration to think of even cooler shortcuts and macros than what I have. Go forth and automate!

This was a guest post from Craig Lloyd, the Director of Content Operations and a project manager at iFixit. Want to see your work on the Zapier blog? Read our guidelines, and get in touch.

Craig is the Director of Content Operations and a project manager at iFixit, overseeing the behind-the-scenes creation of repair guides, teardowns, YouTube videos, and blog posts. He's also a die-hard DIYer and father to two adorable cats, Opal and Olive.