The 7 Essential Qualities of Effective Feedback

"Giving feedback turns out to be the unnatural atomic building block atop which the unnatural skill set of management gets built," wrote Andreessen Horowitz co-founder and venture capitalist Ben Horowitz.

Despite being the number one driver of our personal and professional development, effective and actionable feedback can be incredibly hard to give. Emotions get in the way, expectations aren’t properly set, and wrong language is used—each of which strip away any motivation we have to better ourselves and our work.

Automation can help you handle feedback like a pro
Learn how

But as a leader, it’s your responsibility to help those you’re working with grow and thrive. Delivered in the right way, feedback is a window to the future. It shows not just what went right or wrong in the past, but the repeatable ways you envision actions being taken moving forward.

Moreover, we all want more feedback (or at least, the results of a second set of eyes alerting us of our shortcomings so we can do better). We want to be the best we can be at the things we do and crave instruction on how to get there.

So if feedback really is the perfect tool for development and growth why then do so many of us find it so problematic?

Here’s a look at some of the best time-tested techniques for structuring and delivering effective feedback.

How and Why Feedback Goes Wrong

There are so many reasons why a seemingly innocent feedback session can go wrong: Strong emotions on both sides, a focus on character rather than on behavior, a lack of clarity about what needs to change and why. However, the number one reason feedback goes wrong goes deeper than just what’s being said.

From our early days of running away from sharp-toothed predators, our brains have evolved to instinctively protect us from harm. Unfortunately for the modern worker, this protective instinct means we can’t help but fight back against anything that challenges our well-being. Even if it’s only words.

Negative or critical feedback threatens not only our self-esteem but also our basic need for safety and security by making us feel as though our livelihood is at risk:

"What hurts most in negative feedback, then, isn’t the overt content of the message so much as the threat of exclusion, abandonment, and ostracism that accompanies it," explains Karen Wright in Psychology Today.

You need to remember the vulnerable position you’re putting the receiver of your feedback in and have a clear purpose set in place. 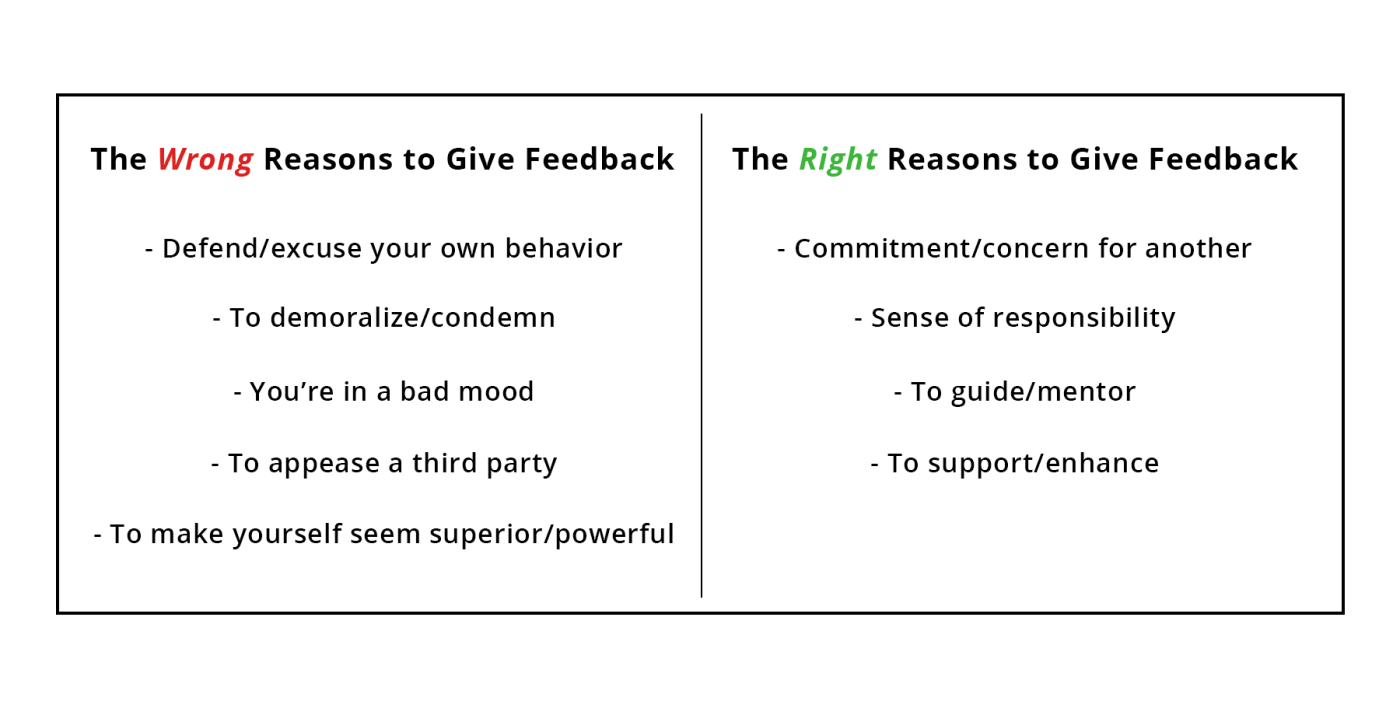 Chart inspired by Zen and the Art of Constructive Criticism

Not only that, but your tone and delivery of the feedback can also have a huge impact on how feedback is received.

Psychologist Dr. Christian Jarrett warns of ‘Destructive criticism’—feedback that is delivered with a harsh tone, or that implies the reason for the poor performance is personal characteristics of the recipient that are stable and can’t be changed. As well as ‘subtly offensive feedback’—negative feedback delivered politely at a superficial level, but which implies indirectly that the recipient has been foolish.

Before you even start thinking about what you’re going to say to a teammate about their performance, come up with a clear and proper purpose behind what you’re saying and remember they can’t help but feel threatened. A little kindness and understanding goes a long way in getting your feedback heard. 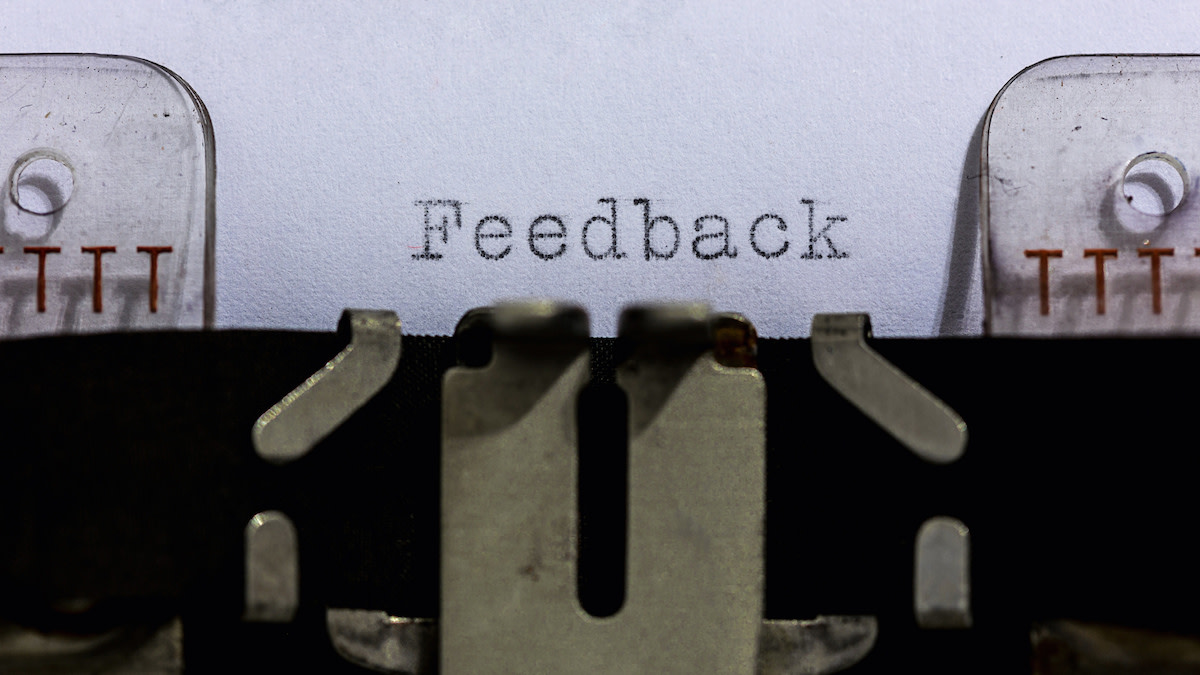 With the right purpose in place, we need to think about the when and why of giving effective feedback. For psychologist Victor Lipman, this means your feedback needs to be:

"Effective feedback requires that a person has a goal, takes action to achieve the goal, and receives goal-related information about his or her actions." explains author Grant Wiggin. "Information becomes feedback if, and only if, I am trying to cause something and the information tells me whether I am on track or need to change course."

It’s this subtle difference of giving advice that is clearly actionable that separates effective from ineffective feedback. Your feedback needs to tie directly into the goals of the person you’re speaking with. In everyday life goals can be implicit—if your friend is asking for feedback on a draft of a book they’re working on, the goal is clearly to write a good book—but in the workplace, you need to explicitly remind people the goal they’re working towards and tailor your feedback to explain how they’re going to hit that goal.

3. Effective Feedback Focuses on the Future

Although the event that triggered you giving feedback took place in the past, the biggest mistake you can make when giving effective feedback is to address that issues. Why? Because of this simple thing called time.

Effective feedback understands that you can’t change any event that has already happened. Instead, you need to be focused solely on the future and how you can help someone change course to get closer to their end goal.

One way to do this is to use the Manager Tool’s Feedback Model, a simple template for giving effective feedback that ensures you’re hitting all the right points, that goes like this:

"John, can I give some feedback?"

"You were late to our meetings the last few mornings which made a few of us have to re-schedule our days. In the future, I’d like you to focus on getting here on time so we can all stay on schedule."

The key here is that your feedback is focused solely on the future. You’re not blaming for what went wrong or harping on about the mistake, but rather explaining the facts of what happened. Facts can’t be argued, meaning emotions won’t get in the way.

Furthermore, social behaviorists have discovered that negatively focusing on someone’s past behaviors won’t actually cause them to change that behavior moving forward. Instead, they’ll spend more time trying to avoid punishment by covering up what they did wrong and not communicating about it.

By focusing on the future, you’re not trying to provide a solution to one problem, but a repeatable solution going forward.

4. Effective Feedback is About the Process, Not the Person

Rather than saying "The presentation was too long and boring," better feedback would say "Instead of 2 or 3 examples on each slide, which distracts from the main message, limit yourself to 1 example per slide. This way, the presentation is more succinct and impactful and we’ll be able to reduce it from 20 minutes to 15."

Not only does this focus solely on the action that happened and the future action you’d like to see happen, but, as author and social psychologist Heidi Grant Halvorson writes, you are emphasizing actions that someone has the power to change, which is both empowering and respectful. "Talk about aspects of her performance that are under her control," says Halvorson, "like the time and effort she put into a project, or the strategic approach she used."

However, remember to always keep your feedback meaningful. Praising effort is another easy trap to fall into. You may think you’re making things better by putting a positive spin on the situation, but, according to Halvorson, complementing effort after a failure not only makes people feel stupid, but also leaves them feeling incapable of reaching their goal.

Keep it action-oriented. Keep it informational. And most of all, keep it about the process and what they have the power to change.

It's easy to not give feedback because you know it will be taken negatively. We tell ourselves that we don’t know what words to use, or that the action isn’t that big of a deal, or that giving feedback will ruin our relationship with our teammate.

However, stalling or not giving negative feedback ruins the trust you’ve built with teammates.

If you don’t know the words to use, start by planning and practicing your first sentence. After working with managers and executives at dozens of workshops on how to navigate difficult discussions, Art Petty found crafting and practicing the opening sentence was consistently identified as the single most important step to take. Once you’ve got your opening line, keep the rest simple and direct. Follow the rules above and focus solely on the action that happened and what you want to see change in the future.

It doesn't have to be that hard. As SkyeTeam CEO Morag Barrett explains, giving feedback should be an ongoing process—not something that's a big deal. "If feedback is seen as nothing more than a part of everyday communication, it won't be misinterpreted as being something special," says Barrett. But if you hold out on giving feedback, undue emphasis and pressure will be put on it.

If you’re still nervous about giving negative feedback, prepare your teammates for it before you even start a project. As psychologist Christian Jarrett explains, how you frame the task in the first place can have a direct impact on how feedback is received after the fact. For example, if you give a teammate a project with a ‘show me what you can do’ mentality, don’t be surprised if they take it personally when you explain where they fell short. On the other hand, if you frame a project as a chance to learn and develop skills, your feedback, even if negative, is more likely to be interpreted in a productive and open-minded manner.

6. Effective Feedback Can be Positive

With all the focus on critical feedback and changing negative behaviors, it’s easy to forget that effective feedback is just as much about reinforcing and promoting good behaviors teammates are already taking.

It can be all too easy to assume someone knows when they’ve done a good job, but research shows that the simple act of recognizing a job-well-done can have huge returns.

Positive feedback stimulates the reward centers in the brain, leaving the recipient open to taking new direction. However, again we need to remember to be specific about what we are praising someone for. Without being explicit about what they did right, you’re leaving them free to interpret what they think they’re being praised for, which can lead to more issues and awkwardness down the road.

Difficult feedback… is about conflicting views, feelings, and values. Reasonable people differ about all these things.

Although you’re most likely giving feedback from a position of power, you should always remember to keep your own ego and emotions in check.

"Difficult feedback is rarely about getting the facts right," says executive coach Robert Witherspoon. "It’s about conflicting views, feelings, and values. Reasonable people differ about all these things."

To get someone to truly change their behaviors, they need to respect what you’re saying and trust that you have their best interests at heart. This all starts with a willingness to hear them out.

After you’ve given your feedback, ask them questions that show you’re open to understanding what happened and want to nurture a supportive environment, including:

"The more an individual thinks about improving her performance, the more committed she is to making it happen," says professor of human and organizational development Mark D. Cannon.

Crafting and delivering effective feedback is one of the greatest skills of a strong leader. Not only does it create an inclusive, supportive environment of personal development and growth, but can also have significant impact on how your company grows.

As The Effective Manager author Mark Horstman explains, results are nothing more than the aggregated behaviour of your teammates. The more you can effectively influence and promote the right behaviors, the better results you’ll see. It’s that easy.

Jory MacKay is an award-winning freelance writer and editor obsessed with the ways technology is changing our future. He once had an essay narrowly beat out for Medium’s top monthly read by Leonardo DiCaprio.