Something I've noticed from building Exist is that a surprising amount of work in a startup is just sending emails. Responding to customer feedback and support requests, discussing our plans and progress, getting advice from other startup founders, setting up meetings: all of this happens via email.

I'm resigned to the fact that email is an unavoidable part of running a startup, but I'm determined to cut down on any unnecessary emails so I can keep some semblance of order in my inbox.

I've done a bit of hunting around to see how successful people handle an influx of emails. Some of these strategies focus on managing your inbox, while others look at better ways to send emails. Hopefully you'll find a nugget or two in here that will work for you.

1. Action Emails When You Read Them

If you're prone to rereading emails over and over, this could be the trick you need to get your inbox back under control. Instead of reading new emails and leaving them to be dealt with later, getting into the habit of "processing" new emails will save you the time and effort of handling each one multiple times.

Robby Macdonell shared a way to force yourself into this habit on the RescueTime blog. His Gmail setup automatically archives all read emails. This means he has only one chance to act on each email: the first time he reads it (unless he wants to hunting through his archive for it later). For any email Robby needs to action in the future, he adds a star, so they're easy to find in his "Starred" folder. Everything else is archived or actioned immediately. 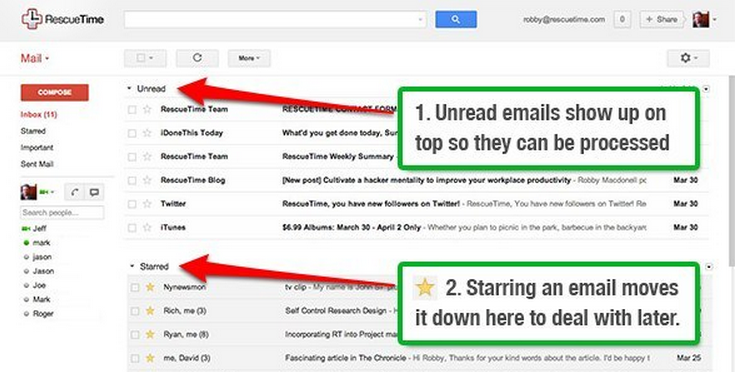 This is another tip from Robby that keeps those starred emails from being left too long. With a simple script, Robby automatically adds an attention-grabbing red label, "DEAL WITH ME," to any starred email that is over two weeks old. You can grab the script in Robby's post, which offers detailed instructions for setting it up.

When those emails are finally dealt with, the label gets removed automatically. Pretty neat, huh?

3. Use a Separate Inbox for External Email

This tip comes from Scott Hanselman, a program manager at Microsoft, author and avid blogger and speaker. Scott uses filters to send incoming emails into three different inboxes: one for external emails (anyone outside his company), another for any emails he's CC'd on, and a last one for all internal company emails sent directly to Scott.

This is a really good way to manage the time and energy you put into processing emails, because you can prioritize external emails if you want to (as Scott does) without wasting time looking for them in your inbox—or getting distracted by internal emails instead.

Likewise, if you set aside time for internal work emails, you can focus on just those.

4. Don't Check Email in the Morning (or at Night)

Another tip from Scott is a common one: don't check your email in the morning.

There are various reasons why this could be a bad idea: it starts your day with other people's priorities, it can take up more time than you expect, or it can distract you from doing "real" work.

Scott's reasoning is that morning email replies show people that you're available at that time, and encourage them to send you emails and expect replies on future mornings.

The same goes for answering emails late at night: Scott says this sends a message to your boss or coworkers that you don't mind working late at night.

Want more from Scott? Check out his complete list of productivity tricks: "How to Scale Yourself and Get More Done Than You Thought Possible".

5. Separate Your Emails into Zones

This tip from entrepreneur Andreas Klinger is Gmail specific, but you can make a similar setup with other email providers using folders.

In Gmail, the multi-zone setup includes five separate sections that are managed manually using the Getting Things Done method.

Each zone is just a separate inbox set to search for specific traits in email messages. This means as you action each one from your inbox and add a zone label (a question mark if you're waiting for a response, a yellow exclamation mark if you need to respond to it later), you can archive the message and your inbox searches will sort your emails for you. You can follow this step-by-step guide to set up your own zones in Gmail. 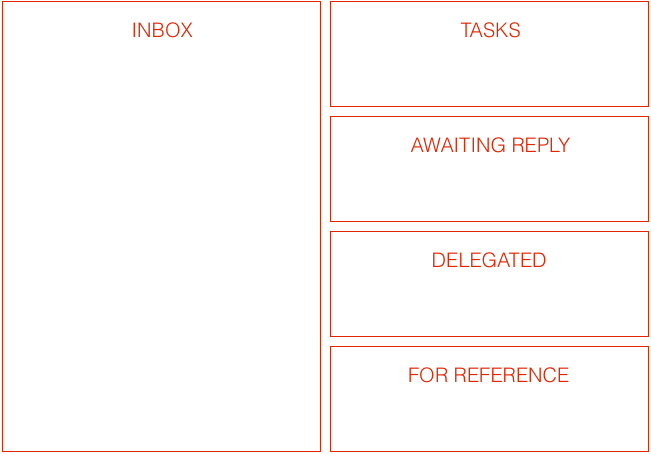 Using zones means each email has an appropriate home, so you can get a quick overview at a glance, rather than looking at an uncategorized inbox list. I love how visual this setup is, and how much easier it makes keeping your inbox count low.

Tony Hsieh, CEO of Zappos, developed a method of keeping up with an influx of emails called Yesterbox. The idea is that you start each day by dealing with yesterday's emails. Any emails that come in today (unless they're urgent) are off-limits until at least ten of yesterday's emails have been dealt with. Each day's task is to work through yesterday's inbox, hence the name. 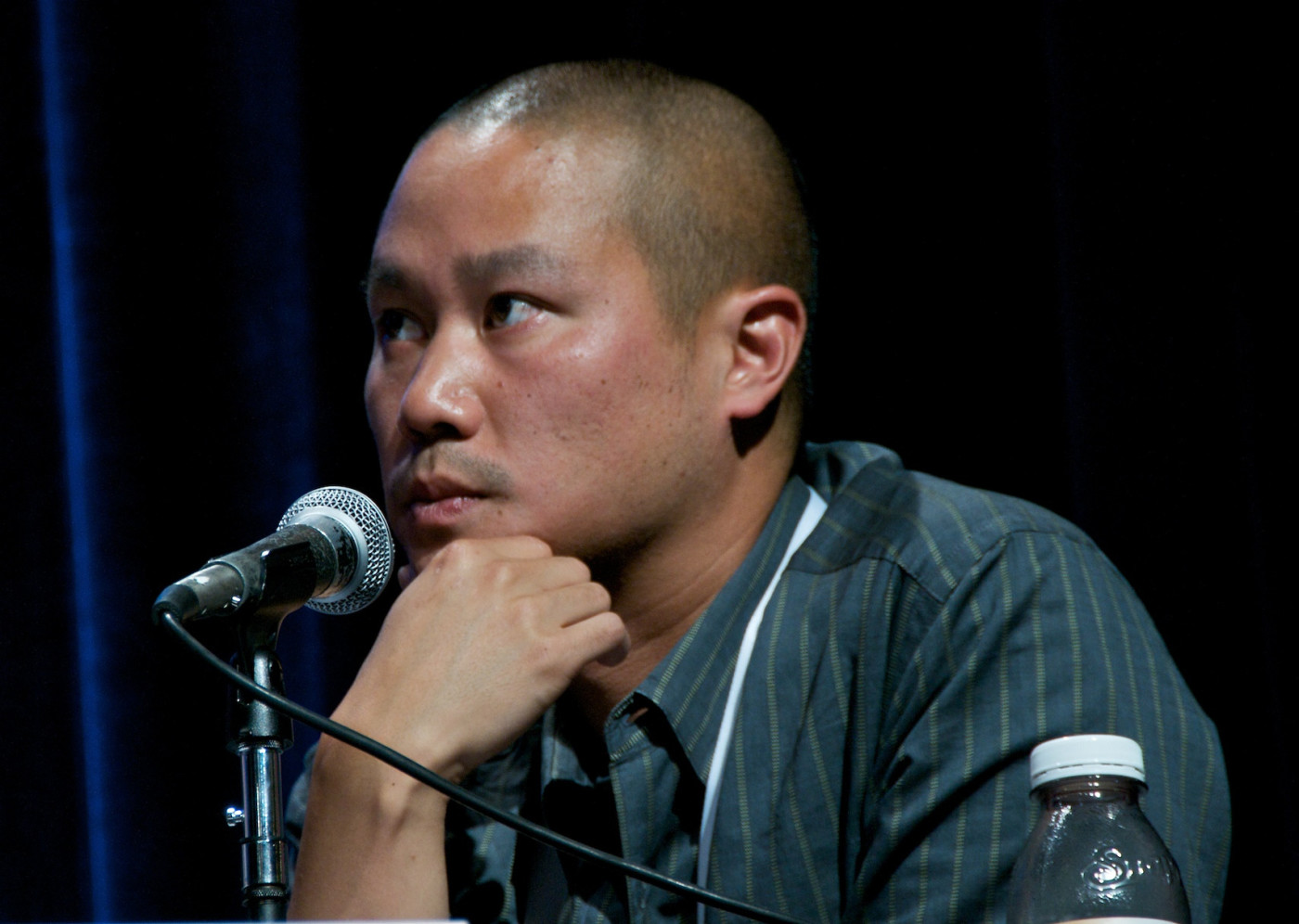 Tony says this helped him overcome a procrastination problem: he used to put off tricky or long email responses and deal with all the short, easy ones first, regardless of when they were received. Now, he works through all of yesterday's emails, regardless of how long or tricky they are.

With Yesterbox, Tony's happy to be getting through all of yesterday's emails by noon. My inbox isn't nearly that full, but if you're spending hours every day responding to emails, Yesterbox could help you keep up.

Just to completely contradict what I said earlier, I want to add this opposing idea of checking your email first thing in the morning. This is something I do without fail, even on weekends, and a lot of people would probably say that's a bad thing. But it works for me.

Checking my email as soon as I wake up helps me prepare for my day: I can make sure there are no emergencies I need to deal with—or plan them into my day if there are—and catch up on what work my colleagues have done overnight (particularly useful when working in a remote team with colleagues all over the world, or even just one co-founder who likes working late after I'm in bed).

I generally don't reply to any emails first thing in the morning, but checking my inbox helps me to be prepared for the day ahead. It also means I can confidently start work when I get to my desk without having my inbox open, because I already know what's in there.

8. Automate What You Can

Some of these setups require scripts and filters to automatically organize emails. There are some other ways you can save time with automation and shortcuts.

TextExpander or PhraseExpress, for instance, can make it fast and easy to add snippets of text that you use often. If you answer the same questions regularly, this can be a huge time saver.

Zapier co-founder Wade Foster has a couple of tips for automating the email triage process. One is to send canned responses to emails you get all the time. If the majority of your email message is the same each time, a full canned response is probably going to be more efficient than saving snippets of text to insert.

Wade also uses a Zap—event-based automation performed between two apps—to . Rather than a folder inside your email, sending starred messages to your to do list can keep them more visible so you don't forget to action them. You can set up a Zap to send to pretty much any to do list tool that you use. For more automation, check out the popular and email Zaps, and for extra power, the .

The way you write your emails can actually influence the emails you receive. In fact, the number of emails you send can make a difference to how many you receive—after all, most emails will come back to you with a reply.

If you absolutely have to send an email, keeping it short can reduce the length of the reply as well. You've probably noticed that long emails beget long emails—a good thing when you're catching up with an old friend, but not what you want for everyday business emails. If you're struggling with this, you might want to try five.sentenc.es, a movement aiming to cut down the length of emails. It provides a quick explanation to add to your signature for anyone who expected an essay-length missive from you.

Regardless of how you do it, try keeping your emails to the point and focusing on just the important facts, and your recipients will be more likely to do the same.

Another way to write better emails is to avoid open-ended questions. My dad actually taught me this trick back when text messages were expensive to send (or at least, not included for free in most phone plans), in order to make our SMS conversations faster and more efficient.

The trick is to offer an option when setting up a meeting or a call, rather than leaving it open for suggestions. If you suggest a time and place for your meeting in the first email, your recipient can simply say yes, or suggest an alternative. This speeds up the process and usually requires fewer mails to come to an agreement.

Email doesn't seem to be going anywhere. It's part of our lives at work and at home, and many of us are struggling with an ever-increasing inbox count. If that's a problem for you, give some of these strategies a try to keep your inbox under control.