Meditation is linked with a huge range of mental and physical health benefits, from reduced stress and anxiety to deeper self-awareness and a longer attention span. While it's never been more popular, regular meditation can be a hard habit to build—and I'm speaking from experience. It took me almost a decade and a half-dozen failed attempts to make it part of my daily life.

There are lots of meditation apps available now that claim to make learning to meditate easier—and some of them really do. I took more than 25 of the most popular ones and put them through their paces. These are the five best meditation apps.

What makes a great meditation app?

Meditation is a simple idea in principle: sit quietly, focusing completely on something like your breath, the sound of a bell, or the physical sensation of your body. But it's hard to do in practice. It's easy to feel like you're doing it wrong, to get distracted or disheartened, and just to give up. (Again, I know—I gave up lots.)

The best meditation apps help you work through all this, especially if you're just starting out. 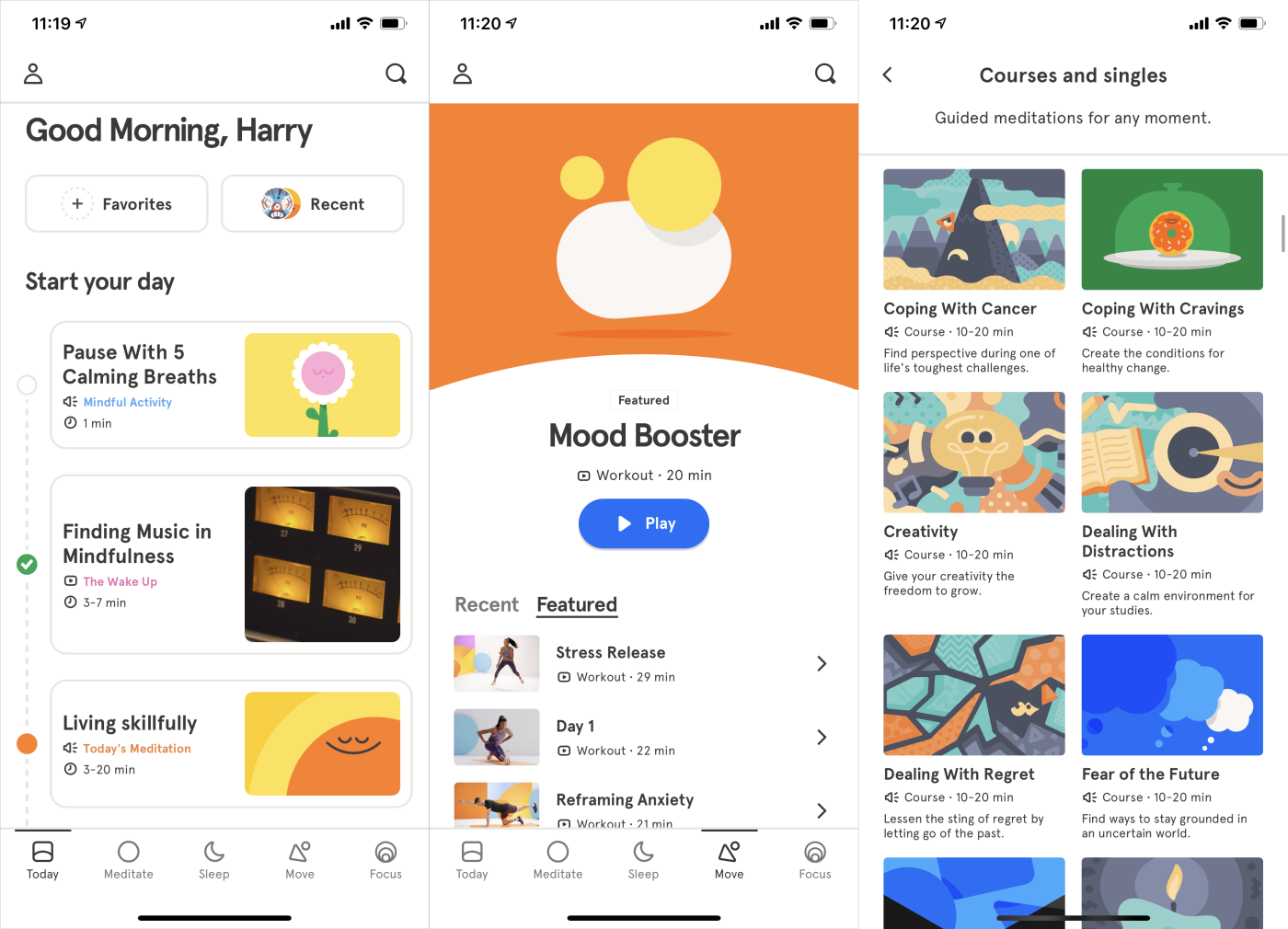 Headspace is the 800-pound Buddha statue of meditation apps, and for good reason: it's largely responsible for the current boom. A big part of its appeal is Andy Puddicombe, an English (former) Buddhist monk with a ludicrously calming voice who guides many sessions—but the service itself is exceptional.

When you open the app, you're immediately presented with the Today view, which features that day's meditation, the next meditation in any course you're doing (like the Basics introduction), a daily Wake Up video, and some guided breathing. There's almost no friction to getting started, and the illustrations that scatter the interface are just flat-out charming.

Toward the bottom, you can dive deeper into what Headspace offers. In the Meditate tab, you can explore all the different meditations, from individual sessions and an unguided timer, to courses like Dealing with Regret and Coping with Cancer. The Sleep tab has meditations to help you sleep as well as Sleepcasts (sleep stories from people with soothing voices), sleep music, and an all-night relaxing sleep radio. The Move tab has more physical practices, like Feel Good Yoga and Mindful Cardio sessions, while Focus has sessions and music to help you work better.

Where Headspace really stands out is in its approach to beginners. Its onboarding is second-to-none, and the three Basics programs build nicely on each other. After that, the structured courses allow you to go further with the areas and techniques that most interest you.

Best meditation app for people struggling to relax or sleep 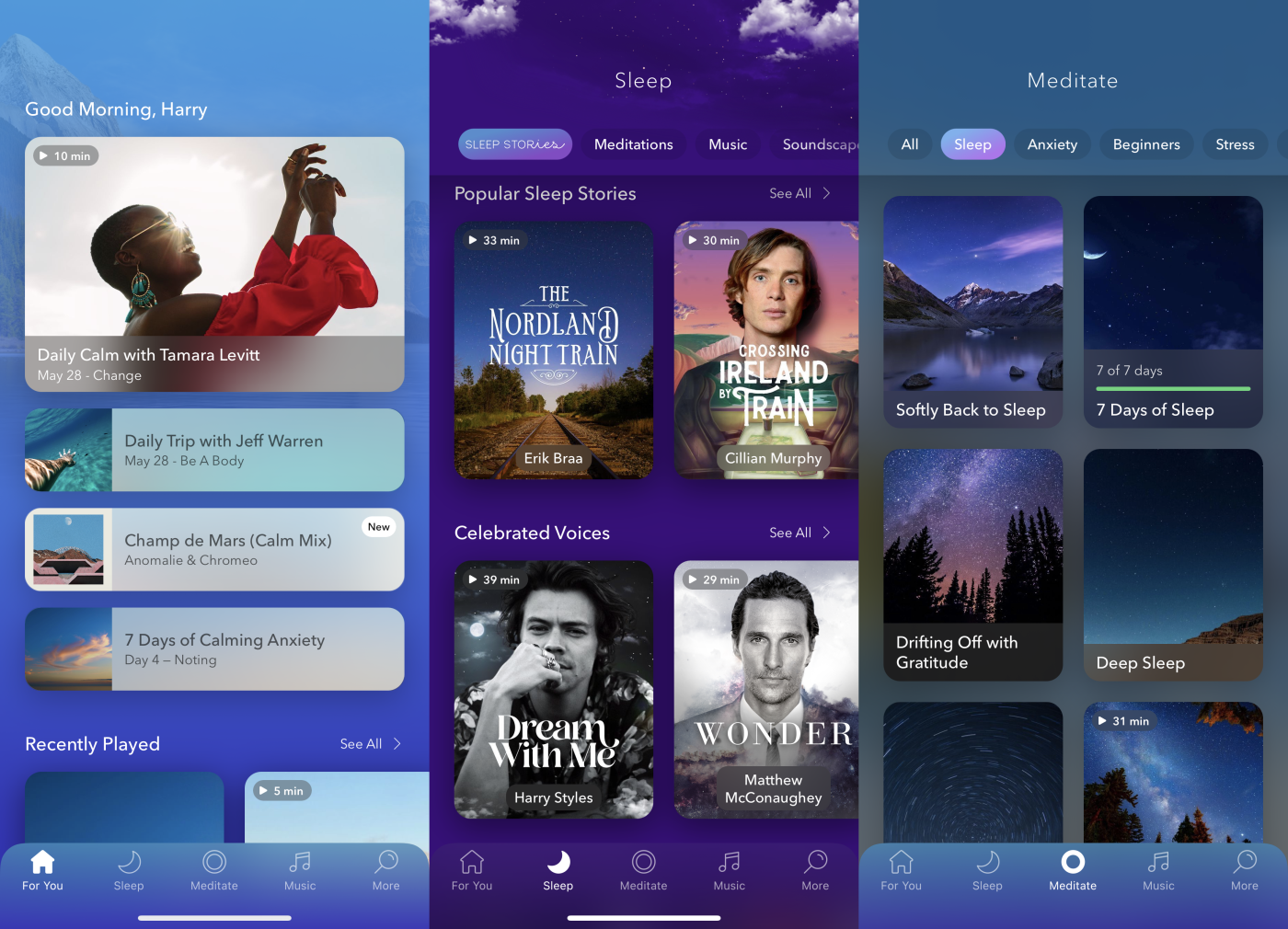 Calm is the other huge name among meditation apps, and—again—it's with good reason. It's a fantastic app and is the one that finally made meditation part of my daily life (I'm on a 511-day streak as I write this). Like with Headspace, a big part of the appeal for many people is the lead meditation instructor: in this case, Tamara Levitt, a wonderfully chatty Canadian.

When you open the app, the first thing you see is the suggested meditations, including The Daily Calm, which—fairly obviously—is a daily meditation. If you open the app later in the day, you'll also get a suggested Sleep Story, which is one of the big features of Calm.

Sleep stories (and other sleep meditations) can be accessed from the bottom bar of the app in the Sleep tab. There, you'll find the likes of LeVar Burton, Matthew McConaughey, Harry Styles, Cillian Murphy, and other smooth-voiced celebrities (and meditation instructors) delivering stories to help you drift off to sleep. Some are traditional stories to soothe you, and others are deliberately boring: John McEnroe has a 30-minute highlights of the rules of tennis.

The rest of the app is packed with other great mindfulness and meditation features. The Meditate tab has all the individual meditations as well as themed courses to follow along with. Music has relaxing or focusing music, again with a celebrity bent: deadmau5, Katy Perry, Post Malone, and Shawn Mendes are all featured. The More tab hosts Calm Kids, Calm Masterclass (basically workshops or lectures on different ideas), Calm Body (yoga), and, well, more.

I'm obviously a huge fan of Calm's meditations, but I should note that they're a little less structured than Headspace's. If you're purely after a meditation app, Headspace probably takes the top spot—but Calm more than delivers on the meditation front, and its sleep offerings are second to none.

Calm Price: Free 7 Days of Calm course, then from $15/month 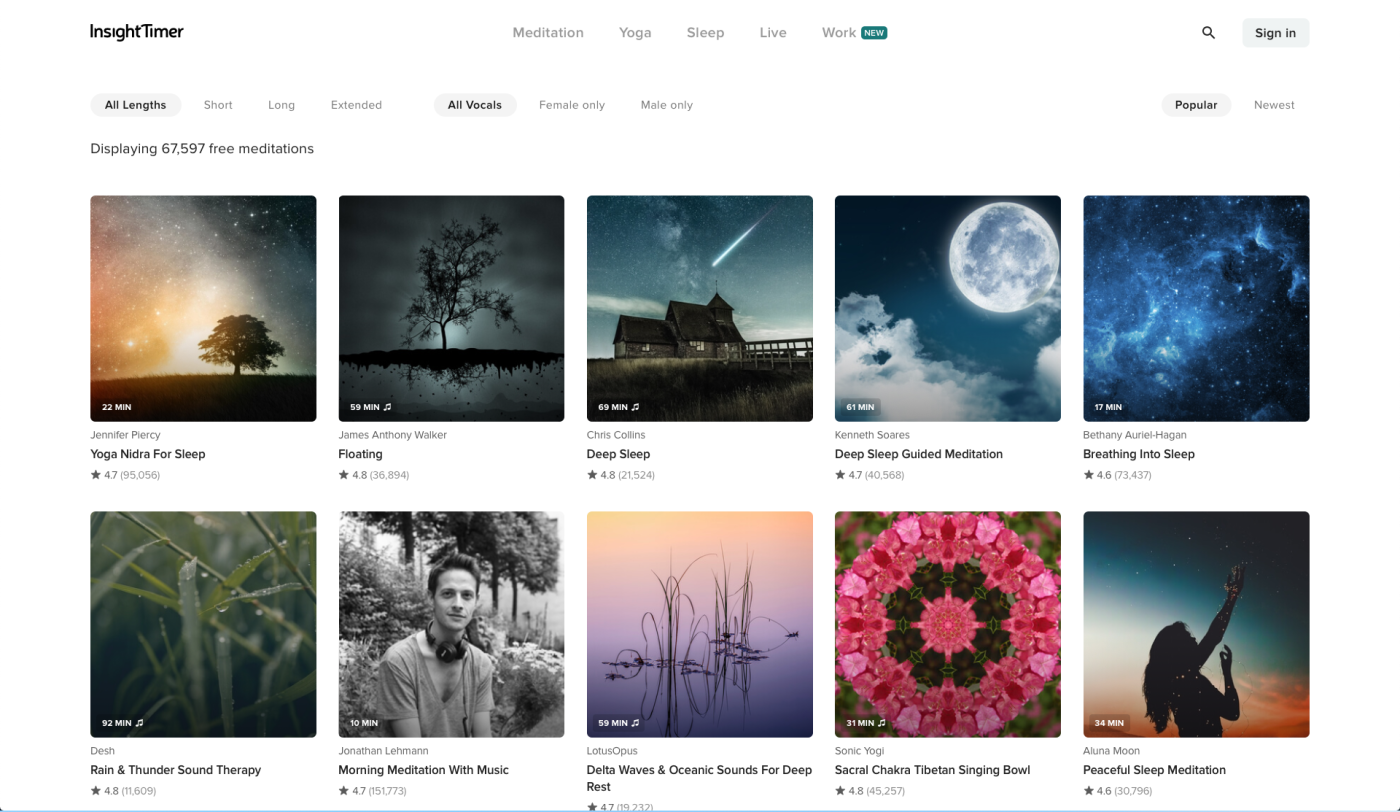 Most big meditation apps have relatively high monthly fees and limited free content. It's understandable, given the constantly updated content, but if you aren't sure whether or not meditation is for you, then paying $10-20/month can seem a bit steep. Insight Timer also has a premium subscription ($60/year for Member Plus), but it offers far and away the most free content of any app.

Insight Timer is a bit different from the other apps. It's more of a YouTube for mindfulness. Any meditation instructor, yoga teacher, or mindfulness guru can use it to guide meditations, lead workshops, and give talks (including Gisele Bündchen and Russell Brand). This means there are more than 95,000 free meditations you can access, although with the caveat that it's far less structured than an app like Headspace or Calm.

Open the app, and you're presented with all the Live Events that are on right now, as well as the schedule for the next couple of days. If you want to just meditate, it's best to ignore all that and tap Timer for an unguided session or Guided for a guided one. (Courses has the more planned offerings, but it's locked away behind that Member Plus plan.)

If you tap Guided, you'll see a handful of Beginner Kits: collections of meditations based around themes like Learning to Meditate or Coping with Anxiety. You can also check out the Featured sessions, or use the filters and themes to explore the tens of thousands of options.

Find a meditation instructor you like on Insight Timer, and you can tap the heart icon to save that particular session to your favorites or Follow to follow them and check out all the other meditations they've uploaded. There are reviews and public comments so you can see what's good and what isn't for you.

Insight Timer can feel a bit overwhelming, which isn't ideal for a meditation app—but you just can't beat the sheer options you have for free. If you can't find an instructor or style you like here, meditation probably isn't for you.

Insight Timer Price: 95,000 free meditations. $60/year for Member Plus with courses and other premium features. 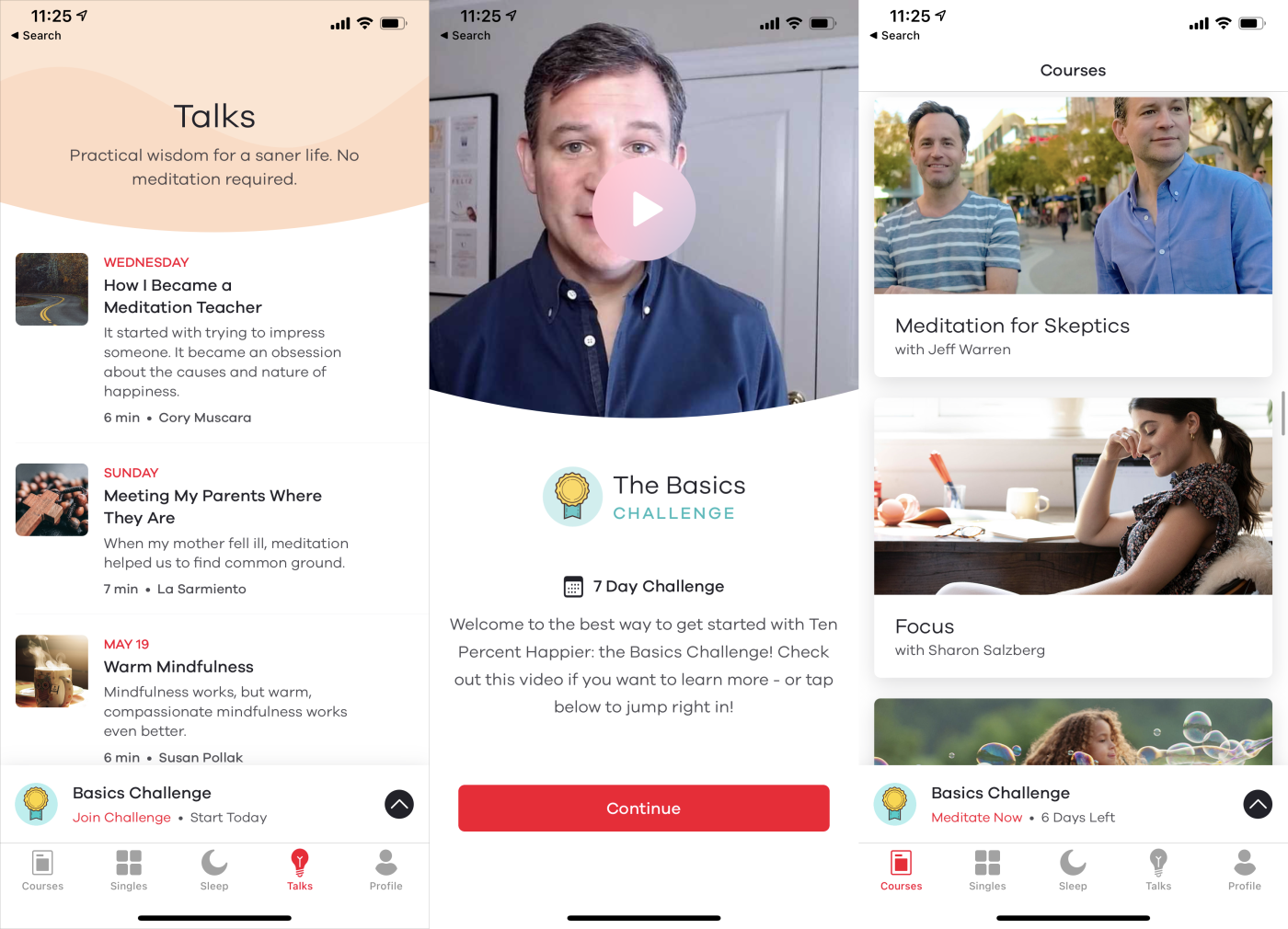 Most meditation apps kind of assume you're already convinced on the whole meditation thing—Ten Percent Happier, on the other hand, is prepared to spend more time to get the skeptics on board.

The Ten Percent Happier app spun out of a book of the same name by former ABC news anchor Dan Harris. After having a panic attack live on-air, Harris decided something needed to change. His search led him to meditation—which he was initially skeptical of, hence the focus of the app.

But this isn't some weird promotional book tie-in. It's a fully-featured meditation app that's the equal of all the others on this list.

The app is split into four sections: Courses, Singles, Sleep, and Talks. Courses are series of meditations aimed at a specific theme or topic, including things like the Basics of Meditation, Meditation for Skeptics, and Mindful Eating. Many of these meditations have video intros that explain the purpose of the meditation, so you aren't just being asked to sit and mindlessly breathe. Singles is the collection of all the standalone meditations, including the Daily Dose. Sleep has relaxing meditations to help you wind down in the evening, and the Talk section has regularly updated lectures about ideas around meditation and mindfulness.

Best meditation app for exploring the science and philosophy of meditation 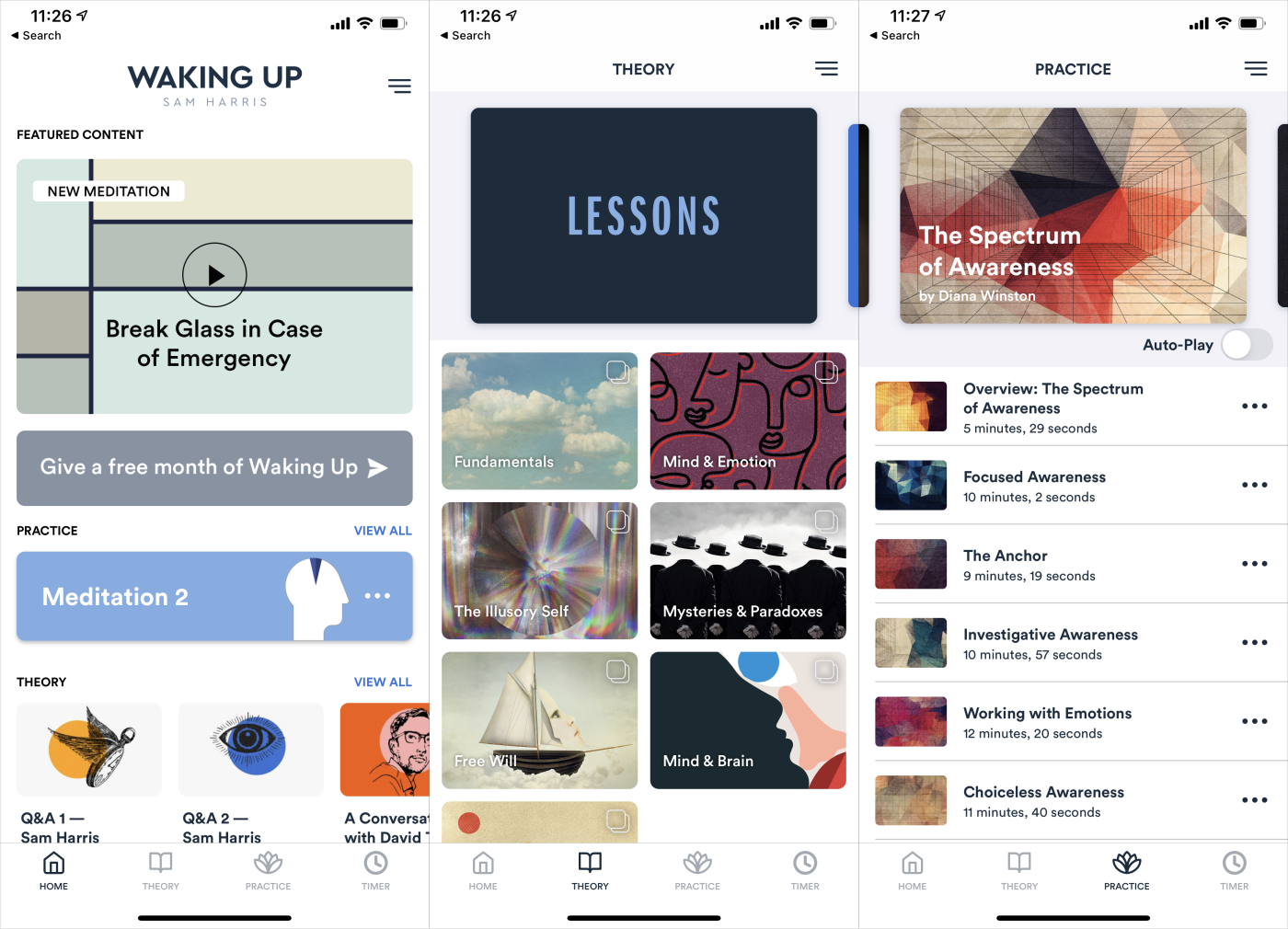 Sam Harris, the neuroscientist and philosopher, is another author with their own meditation app-book combo: this time, it's called Waking Up.

Waking Up takes a more philosophical approach to meditation with practice and theory being given near-equal billing. The idea isn't just to use meditation as a quick-fix when you're stressed or as a way to relax in the evenings, but also as a tool for investigating your own consciousness and existence. It can be heavy stuff, for sure, but if it all gets a bit much, you can just use the unguided Timer function.

Waking Up has a highly logical approach to everything. When you open the app, you'll see featured content, the next meditation you're due to do, and some suggested theory lectures. Tap into Theory, and you can explore things like whether free will exists and how to do good in the world. Practices breaks meditations into courses, including the obligatory 28-day beginner offering. There are also more structured introductions to other styles of meditation and mindfulness, like Zen Buddhist practices.

If all this sounds incredible to you, then Waking Up is definitely the right app. But if you're unsure how you feel about meditation or just want a way to rein in your emotions from time to time, one of the other apps may suit you better.

Waking Up Price: Free for five introductory meditations and theory lectures, then from $14.99/month. Uniquely, anyone who can't afford it can get a free year of premium access, as Harris believes meditation should be open to all.

Harry Guinness is a writer and photographer from Dublin, Ireland. His writing has appeared in the New York Times, Lifehacker, the Irish Examiner, and How-To Geek. His photos have been published on hundreds of sites—mostly without his permission.