1,000 Apps, Limitless Possibilities: Thanks for Helping Us Build the Future of Work

That's a long way from 2011 when PayPal was app #1 on Zapier, the first integration we ever built.

PayPal was part of the demo Bryan, Mike, and I showed off at Startup Weekend Columbia—where we first started working on Zapier. We built a Zap that automatically sent an SMS message every time we made a PayPal sale, like this one:

Today, we're celebrating more than 1,000 apps connected to Zapier. That means millions of combinations and limitless ways to power your productivity.

Thousands of people at companies large and small use Zapier every day to get work done. And that number is only growing thanks to the hundreds of partners who are building new Zapier integrations.

Over the years, our PayPal-to-SMS workflow turned into something more useful than we could've imagined. Back then Zapier looked... different. One trigger plus one action gave you a simple workflow that could automate tasks from a handful of popular apps. It was a quick way to solve the tedious tech problems we found most annoying. 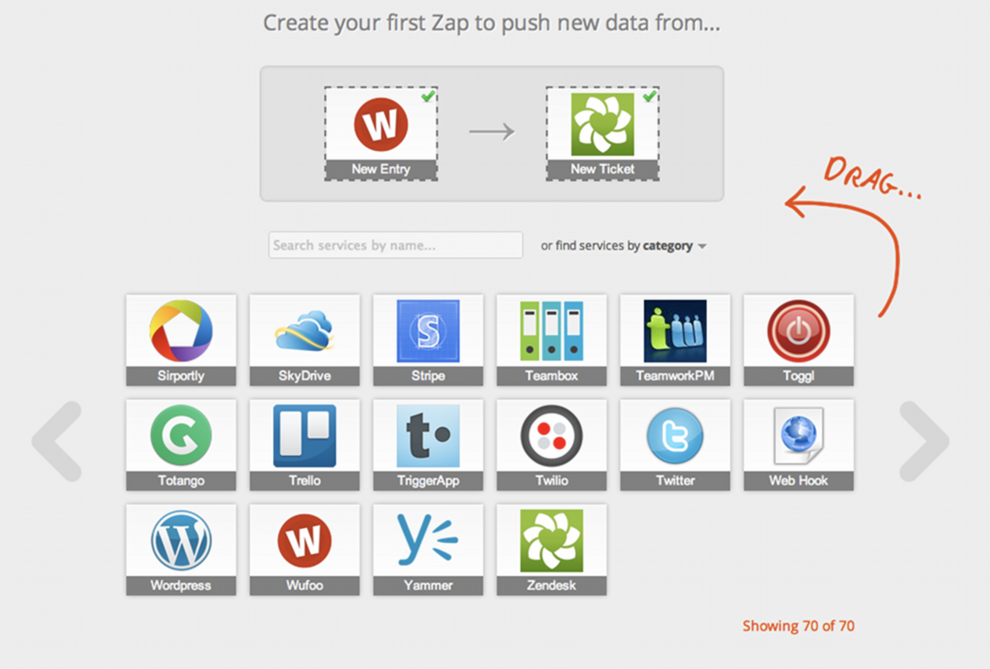 One of the early designs for Zapier

Turns out Zapier wasn't just some fun weekend hack. It was useful enough to land our first customer.

Eventually we landed press coverage, too. Local tech blogs took notice first, and when TechCrunch wrote about Zapier for the first time, we spent the day fielding dozens of requests for new apps. (Dozens! that felt monumental at the time.) People asked for stuff we'd never heard of before—app names that sounded like they were invented just to mess with us.

We even got an email from Aaron Levie, CEO of Box, asking: "Why isn't Box on Zapier?" Of course Box should be on Zapier, we thought; it's one of the biggest cloud platforms out there. We just hadn't gotten to it yet. (.)

That day we realized we couldn't do this alone. Software was eating the world and it seemed to have an endless appetite. If Zapier was going to work, we needed to put the power into the hands of our users.

So we built the Zapier Developer Platform: a free, open ecosystem where anybody with an API can connect it to other APIs. We made it free because we want to connect as many apps as possible. That's the best version of Zapier—the most useful one for our customers.

It was also useful for software companies. We launched the original platform in August of 2012 and teams at HubSpot, Podio, and Ronin quickly latched on.

Over the first year and a half, 141 new services joined Zapier. Today, the majority of integrations you use on Zapier are built and maintained by the teams and companies behind those apps.

Software isn't slowing down. Whatever problem you're solving, there's an app out there to help—and more coming into the world every day. We're working to build the core of that ecosystem for you.

You have thousands of options for apps you'll use to be productive. Zapier is here to help you connect them. No matter what app you pick to get your job done, there's going to be a Zapier integration for it, helping you get more done at work.

Want to see where we are now?

Cheers to the next 1,000, and the thousands after that. Thanks, as always, for using Zapier.

What We Learned Along the Way

One of the coolest parts of working at Zapier is that we get a glimpse of how people around the world get their work done. In that spirit, we crunched the numbers so you can peek behind the curtain, too.

Our senior editor Matthew Guay broke down the different trends we discovered in our data over seven years of automating apps, and how they'll shape our work in the years to come.

Build Your Own Integration

There's still a long way to go. We're doing our best to get every web app on Zapier, but we need your help.

If you run a software company, or help maintain a web app, check out our free, open developer platform. It's the quickest way to integrate with 1,000+ apps without the overhead of maintaining 1,000 integrations. Plus, you'll instantly make your app more powerful and flexible for your customers.

If you don't have an app to call your own, but want to get your hands a little dirty, you can still use our developer platform. Just plug in a public API from one of your web tools and start building. You don't need to make your integration public, and there's no cost to building or maintaining a Zapier app.

Build on the Developer Platform

Are we missing an integration that you consider a must-have for your workflow? Send us a note and we'll log your vote for that app.