We Put Off Drinking Coffee Until 10 a.m. Every Morning. It's Kind of Great.

We Put Off Drinking Coffee Until 10 a.m. Every Morning. It's Kind of Great.

When do you have your first dose of caffeine? For most people, the answer is obvious: first thing in the morning. But is that really the best time to drink coffee, tea, or any other caffeinated beverage?

Scientific research suggests not. Cortisol, a neurochemical related to alertness, is produced at high levels first thing in the morning, making caffeine consumption then redundant at best. Neuroscientist Steven L. Miller explains on his blog:

...cortisol production is strongly related to your level of alertness, and it just so happens that cortisol peaks for your 24-hour rhythm between 8 and 9 a.m., on average. Therefore, you are drinking caffeine at a time when you are already approaching your maximal level of alertness naturally.

So when are we supposed to drink caffeine? Miller continues:

Although your cortisol levels peak between 8 and 9 a.m. there are a few other times where—on average—blood levels peak again: between noon to 1 p.m., and between 5:30 to 6:30 p.m. In the morning, then, your coffee will probably be the most effective if you enjoy it between 9:30 and 11:30 a.m., when your cortisol levels are dropping before the next spike.

This post was picked up by Lifehacker, Time Magazine, Fast Company, and the YouTube channel ASAP Science, to name just a few. I remember reading about this, saying "that's interesting," then going right back to my habit of drinking coffee first thing in the morning.

Until now, in 2019, when I decided to try this lifehack out...and to drag a few of my Zapier co-workers along for the ride. I don't consider this a scientific study—more like a test done by a mildly curious blogger and a few guinea pigs he managed to drag along with him. Danvers, one of my co-workers, had done this for years, which was encouraging:

So I gave it a shot myself. Here's what happened.

I'm up most weekdays at 6 a.m. Before this experiment, I had my daily cup of coffee around 7 a.m. I decided to put off my caffeine consumption until 10 a.m., every morning, for two weeks, and a few of my co-workers decided to join me.

For me, it was kind of brutal during the first week. The first two hours of the morning are generally my most productive time of the day, but without early coffee, I was feeling pretty groggy. I never got to the point of headaches, personally, but I definitely felt off.

But what stood out, even more, was how freaking potent my typical caffeine dose felt. My usual cup of morning coffee—which at 7 a.m. made me feel simply awake—made me downright jittery at 10 a.m., to the point where I had trouble concentrating after drinking it. Which is all just to say that I didn't have the best time for the first couple of days.

...Until Something Kind of Amazing Happens

But then, around four days in, something changed: The early mornings stopped being hard. After a few days I wouldn't even think about coffee first thing in the morning, but still felt energetic.

The jitteriness after my 10 a.m. cup eventually subsided too. Part of this is because I learned to savor my coffee, instead of scarfing it down like I did before. But mostly my body just adjusted to the new routine.

But perhaps the most surprising thing happened in the afternoons. Previously I'd crash around 2 p.m., at which point doing anything resembling writing is utterly impossible unless I make another pot of tea or something.

After making this switch, however, the mid-afternoon crash stopped happening. I stopped making mid-afternoon pots of tea. I felt energetic straight through the afternoon, without any secondary boost.

Can I promise these same results for everyone? Of course not. This is just what happened to me. Several of my co-workers experienced this differently—some noticed no difference whatsoever. People have different relationships with caffeine. Think of this as an opportunity to examine yours. What you learn might surprise you.

Thinking Of Trying This? Here Are a Few Tips

If you’re interested just know that delaying coffee or tea isn't going to be easy at first. Here are a few tips we picked up while trying this out, hopefully, they'll be helpful for you.

Morning coffee or tea isn't just about the caffeine: it's a routine, a way to start your morning. Delaying your morning cup will be a lot easier if you replace the ritual with something else. Danvers, one of my Zapier co-workers, recommends hot beverages: 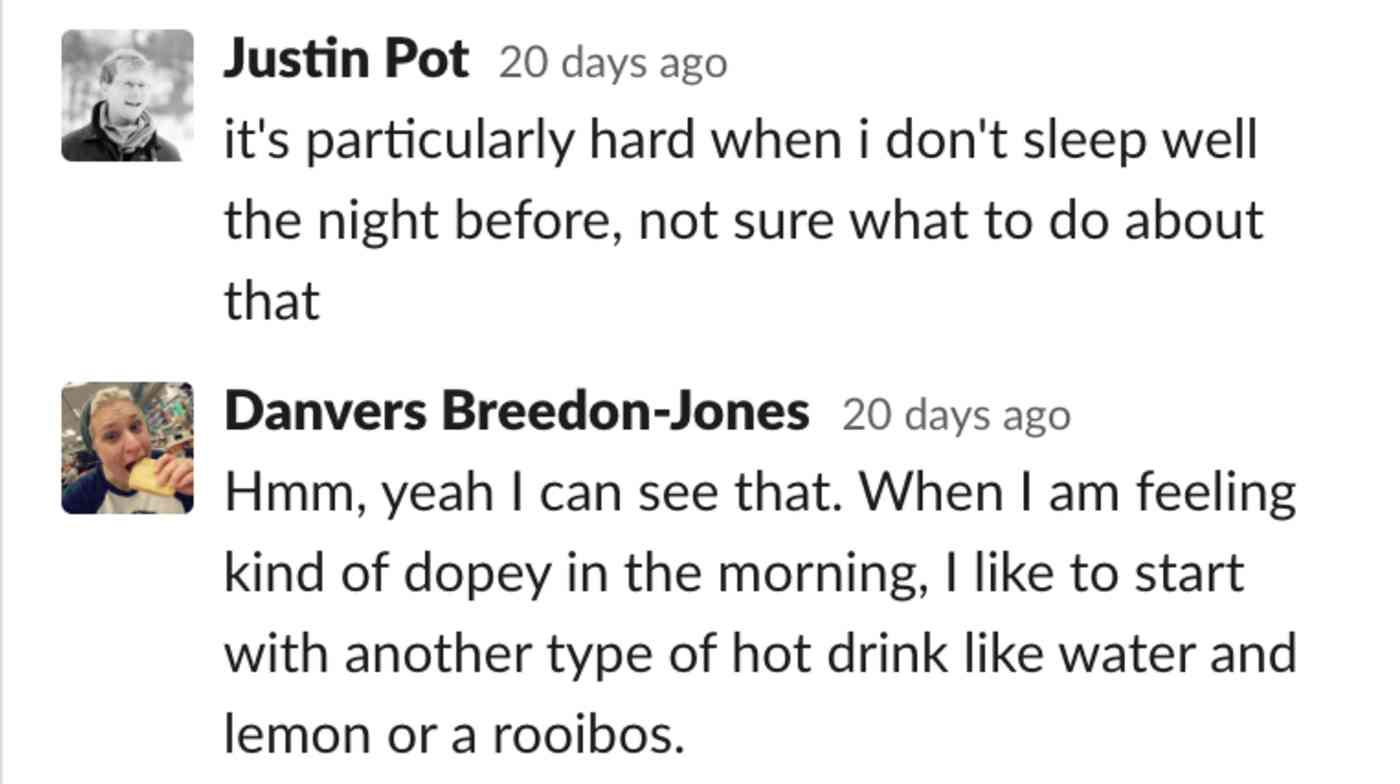 The specifics don't matter, just find something to do when you'd otherwise be making coffee out of habit. It will make the transition a lot easier.

Try Working Out in the Morning

Physical activity is a great way to get the blood flowing, with or without caffeine. Early on during this experiment, I shifted my daily workout from just before lunch to right after breakfast. It helped a lot.

I noticed some jitteriness drinking my routine coffee at 10 a.m. You might notice this too, in which case it might be a good idea to cut back the amount of caffeine you're consuming or to spread that consumption out over a long period of time.

I make my morning coffee using a moka pot and it tends to be quite strong. Since switching to 10 a.m. I've started pouring half a cup of coffee mixed with hot water or steamed milk. It's been a nice change of pace.

I think this is a change that I’m going to stick to, and if you’ve read this far I absolutely recommend that you try it out for at least a week. The results might surprise you.

Justin Pot is a staff writer at Zapier based in Hillsboro, Oregon. He loves technology, people, and nature, not necessarily in that order. You can follow Justin: @jhpot. You don't have to. But you can.