How to build a framework for making tough decisions

At a small business, everyday decisions can be the difference between success and failure. A lack of data and resources often means there's no obvious answer.

We make hundreds of decisions every day, from what to wear in the morning (uh, less so these days) to what to watch before bed. Many of these decisions are so simple you likely don't register them, while others are huge complex beasts that occupy your mind for months on end.

Here's how I think about decision-making within my business.

Every (major) decision requires a framework

In her book Thinking in Bets, Annie Duke describes decision-making by explaining the difference between poker and chess. She explains that in chess, there's always a correct move. In theory, you could calculate all the possible moves and their outcomes, then pick the best one, guaranteeing a positive outcome. In poker, there's never a right or wrong move. The best you can do is pick the move with the highest probability of producing a positive outcome. Everything that happens after you make your move is pure chance.

Running or working at a small business is in many ways the same as playing poker. You're required to make investments (bets) based on a limited amount of information (the cards in your hand). But if you watch people who play poker professionally, you'll notice they follow a set of rules that tell them when to bet, how much to bet, or when to fold. In other words, they have a framework for making the best decision possible.

Creating a thoughtful—and flexible—framework for making decisions will help you make the choice that has the highest probability of producing the best outcome. And the cherry on top: it will also help you flex your decision-making muscles to become a better decision-maker.

Challenging your own beliefs

Applying a framework to decision-making is important because we're not built to think rationally all the time.

Annie Duke gives the example of an early human hearing a bush rustle. The rustling could be a lion waiting to pounce, or it could be the wind. If humans defaulted to thinking it was just wind, we'd have been extinct a long time ago. If we stopped and investigated the bush every time, we'd waste a lot of energy looking at bushes every time it was breezy. But if we default to lions, we're guaranteed not to get eaten—and we don't waste resources checking it out.

Now, instead of worrying about lions hiding in bushes, we worry about what will happen if we make a bad decision. Ultimately, this leads us to rely on what we already know—because that's what's safest.

Of course, there's nothing wrong with relying on what we know. Prior experiences are crucial to assessing situations and making thoughtful decisions. The problem is false positives: it's easy to attribute straight-up luck to superior knowledge and skill, or vice versa.

This is where a framework comes in handy: it forces you to question your existing beliefs and serves as an evaluation tool to determine if those beliefs are worth changing.

My framework for decision-making

Let me back up a bit before I dig into how I use a decision-making framework.

For months, my best friend and I had been struggling to find high-quality clothes that met our professional and personal needs. We discovered that most professional clothing was cheaply made using poor performing and unsustainable materials. We looked everywhere, and we were still struggling to find something that checked all the boxes: professional, comfortable, easy to care for, durable, sustainable, and versatile. Eventually, we stopped looking for brands and started looking for materials. Then, one rainy afternoon in early 2020 in our tiny San Francisco apartment, we found what we were looking for: khullu.

Khullu is a super fiber that comes from high elevation Tibetan yak, and it more than checked all our boxes. With one caveat: almost no one was using it in their clothing.

We decided to use khullu to create a crew neck sweater appropriate for work, leisure, and play—a true go-to item for modern professionals. Thus Oliver Charles, our clothing line, was born.

Back to the decision-making. We were bootstrapped, so it was clear we would need to run a crowdfunding campaign to finance our first inventory run. The decision was which platform to use: Indiegogo or Kickstarter. Here's the process I followed to make the decision.

Step 1: Write the decision down

First things first: write down the decision that needs to be made, along with the potential solutions. The solutions must be mutually exclusive. Here's what I wrote:

What crowdfunding platform should we use to run our pre-sale campaign?

1. We could use Indiegogo.

2. We could use Kickstarter.

Step 2: Write down the unknowns

Next, write out all the unknowns associated with each solution. To do this, ask yourself, "what information would I need to make this a straightforward decision?"

Always avoid making comparisons between the available options. This might feel counterintuitive, but making a comparison will naturally induce biases and could lead to artificially high or low confidence levels.

For example, don't write, "Will people be more trusting of Kickstarter than they will of Indiegogo?" Since I'm more familiar with Kickstarter, I'm more likely to favor it. Instead, ask, "How much do people trust Kickstarter?" Framing the unknown in that way forces you to evaluate Kickstarter independent of Indiegogo, discouraging you from introducing a pre-existing belief.

Finally, unknowns shouldn't have obvious answers. For example: price. If what you're deciding involves paying for something, and you're predisposed to minimize spending, you're going to naturally favor the cheaper option, which might not always be the best choice.

Here's what I used for our unknowns:

(Because we were deciding between two nearly identical products, these are essentially mirror images. That won't always be the case.)

The goal now is to understand your confidence in each of these unknowns turning out positively. Remember: you can never have 100% confidence in any of them. If you were, you'd be playing chess, not poker.

To do this, outline what data you need to collect—and how you'll collect it—to determine your confidence level. Here were my tasks for evaluating the Indiegogo unknowns.

1. Are our customers using Indiegogo? Or would they be willing to?

2. What is the reputation of Indiegogo among the press?

3. Will we benefit from organic traffic on the platform?

Since I did something very similar for Kickstarter's unknowns, I won't spell out that task list. Just remember that it's important to evaluate each option independently.

After collecting all my data, I landed on the following confidence levels for each of the unknowns. Again, the numbers reflect my confidence that the following unknowns will turn out positively.

A couple of points from the data we collected influenced our higher or lower confidence levels.

Now that you have your confidence levels, you can average the percentages to get an overall probability of a positive outcome. If some unknowns are much more important than others, you can even weight each one to be sure it's assigned the appropriate amount of impact. For the sake of brevity, I'll assign equal weights. Here's what I ended up with:

Should we use Indiegogo or Kickstarter for our crowdfunding campaign?

As you can see, Indiegogo was ahead—but only slightly, and we still felt uneasy about going with them over Kickstarter. This is where the known factors, in our case pricing and features, can be helpful.

Depending on the decision you're making, this might still require a decent amount of work, but since Indiegogo and Kickstarter are so often compared, a simple Google search did all the work for us.

What ended up being the nail in the coffin was the ability to do remarketing with Indiegogo. That, combined with our higher confidence in a positive outcome, led us to officially choose Indiegogo.

When we started, we were pretty confident that Kickstarter was the right choice. This was in part because of their brand equity: they're the leaders in the space, so it's easiest to lean toward them. But after going through the process, Indiegogo made more sense.

And in the end, things went our way. We raised $55k and were able to get the business off the ground.

To evaluate the decision, I looked back at where I was most and least confident. In this case, that was press and traffic from within the platform. As far as press goes, we didn't get as much as we'd hoped to during the campaign, but it wasn't horrible. We did get one article in particular that led to about 15 sales.

As far as traffic from the platform goes, we were right to be as confident as we were. When it was all said and done, about 33% of the revenue came from visitors who found us through Indiegogo. This was partly due to getting featured on the front page, being added to a collection, and getting a few newsletter mentions. 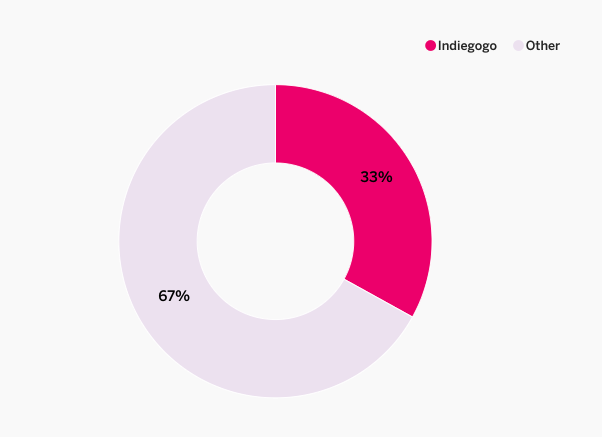 You should always recognize the role that luck plays in any decision. Remember, this is poker, not chess. Luck is as important as skill. Here are some of the ways we got lucky:

All in all, I believe we made a good decision. But more importantly, I know we followed a good process for making the decision. It's impossible to know what would have happened had we chosen Kickstarter, but in theory, there was a 48% chance we would have succeeded there as well.

Step 1: Write down the decision you need to make in as few words as possible.

Step 2: Write down the unknowns for each option, without using comparisons.

Step 3: Determine your confidence level that each unknown has a positive outcome.

Step 4: Determine your overall confidence in each choice turning out positively.

Step 5: If applicable, compare the knowns.

Step 7: Evaluate the outcome. If it turns out poorly, look back at what you did to see where you went wrong...

Step 8: ...or if it was just bad luck. Reflect on the role luck played in the outcome, regardless of how it turned out.

Following a framework like the one laid out above can help you separate your beliefs from your decision-making. This framework is what I try to use for all decisions, but it's particularly useful for the big ones. And the more I use it, the more I naturally think in terms of positive outcomes. I run through it in my head for small decisions, but I write it all out in my notebook for big ones.

Most importantly, when things don't turn out how I hoped they would, I evaluate how I made the decision. This has also helped me be less reactive and more understanding of colleagues, family, and friends when things go poorly.

If you have questions about applying the framework, want more examples of how I apply it, or want to challenge my process, please reach out: slater at oliver-charles.com.

Slater is the co-founder of Oliver Charles, a brand dedicated to creating the go-to item for your personal uniform, a sweater.