5 Creative Ways to Stand Out When Applying for a Job

I followed Basecamp's hiring process with interest via Twitter updates from the company's founders, blog posts on Signal V. Noise, and podcast episodes on Rework. I was curious: what does a person have to do to get their resume noticed when it's one sheet of paper in a stack of thousands?

Following Basecamp's story gave me some information, but I wanted more. So I did what writers love to do after asking themselves a question they can't answer: conducted some research, spoke with a few people, and compiled what I learned into this guide on how to stand out when applying for a job.

5 Creative Ways to Stand Out When Applying for a Job

I've written before about the importance of using keywords in your resume to get applicant tracking systems to surface your resume above others. And while that's a great way to get your resume viewed, it's not a way to stand out.

What are the truly creative things people have done to get noticed and, ultimately, get the job?

From small changes to your resume to launching big projects, here are some of the best ways people have grabbed the attention of hiring managers at companies they want to work for.

The typical resume is a text-heavy document listing job titles, dates, degrees, responsibilities, and accomplishments. It's functional, but it's not fun—to write or to read.

Sometimes, doing something just a little different with your resume can help you stand out. For example, Basecamp's Founder and CEO Jason Fried was impressed by a resume that included a reason for quitting/leaving for each job.

Another way to make your resume stand out is to create a more visually appealing verson. An infographic, video, or interactive resume inevitably stands out against hundreds of black-and-white, text-only documents.

If you're brave, you can really go for it: When applying for a job at piano company Steinway & Sons earlier in his career, Zapier Platform Engineer Regan Starr wrote a song for his job application and filmed himself singing the song while playing the piano.

Writing a song for your application makes a lot of sense when you're applying for a job in the music industry, but it can work for other industries, too.

In my first job out of college, I was a Technical Publications Editor for UPS. Another person on the team had gotten his job there by submitting a video resume where he sang a song and played the guitar. Our boss said it was the weirdest job application he'd ever seen, which, oddly enough, made him determined to bring the applicant in for an interview.

Another thing that Jason Fried posted about on Twitter was an applicant who had taken out a LinkedIn ad that was targeted to Basecamp employees: 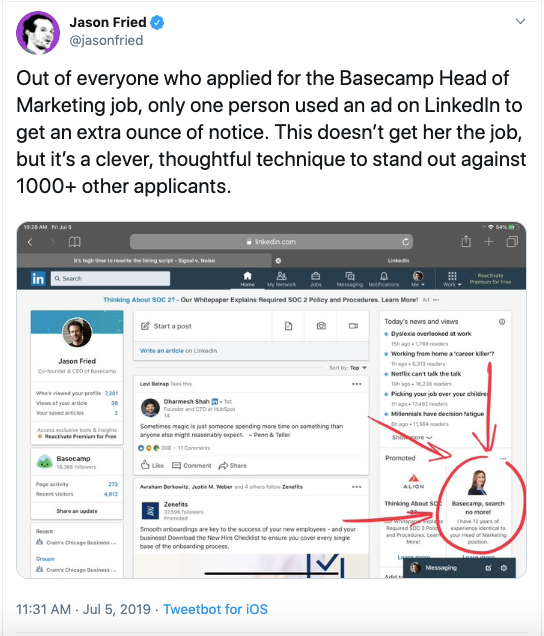 Social media sites like LinkedIn and Facebook offer advertisers deep targeting options that could help you promote your application to—and only to—the people at your desired company.

Of course, you'll have to pay for the ad, and there's no guarantee that it will be seen. As Fried said in a follow-up response to his Tweet: "I hadn't noticed it since I don't really use LinkedIn, but a few other people at Basecamp mentioned seeing the ad, so I checked it out."

3. Just start working for the company

Regan Starr landed his job at Steinway & Sons by singing a song in a video application, but he took a different approach when he wanted to get hired by Zapier:

Rather than apply, I just started working for Zapier in whatever way I could.

Starr created a tutorial website where he would answer questions that Zapier's customers were asking on Twitter. "After 78 days and 156 total hours of free work, I signed a contract with Zapier for a Support job," he says. 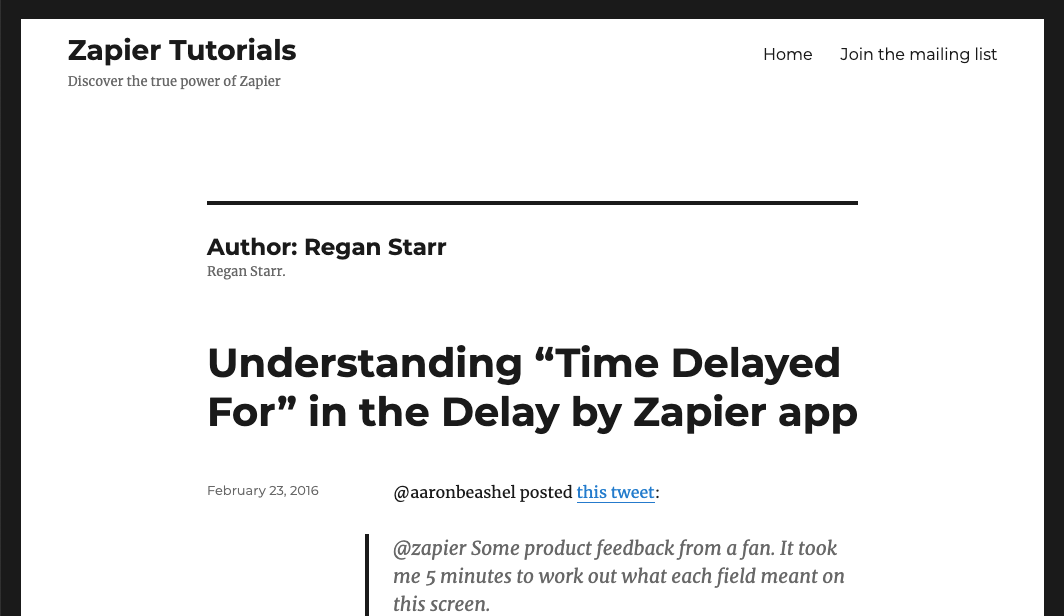 Volen Volkov, Co-Founder of resume-builder tool Enhavcv, shared a similar story of a candidate he hired who didn't bother with the traditional application process:

A year ago, a woman applied to Enhancv in the most extraordinary way I've seen. Instead of going through the normal application process, she decided to research everyone in the company to gain a deep understanding of what they were working on, and then she proposed solutions to every single person on the team.

Volkov said she sent him some data-backed recommendations for how to improve their hiring process, posted comments in the code of one of the company's developers, and edited an article the company's editor had written.

"You might think this sounds creepy," Volen said, "but everyone at the office was speaking about her with excitement the next day."

4. Send a cold email or make a cold call

Two people I spoke to said cold outreach (calling or emailing people you don't know) is a great way to get a job.

In 2008, Zapier Sr. Data Scientist Christopher Peters wanted to be an econometrician—an economist that uses statistics. He'd finished three undergraduate economics courses and was ready to get some practical experience.

I'm a big news reader, and I could see that Loren Scott—a professor emeritus at Louisiana State University where I studied—was a really popular econometrician. I emailed him asking if he could use the help of a budding econometrician.

He said no, but he referred me to David Dismukes at the LSU Center for Energy Studies. I met with David, and he hired me on the spot! He's a great econometrician himself, so I got to learn from an experienced practitioner for the next few years.

So really, a cold email got me my first data science job.

"I'm not a huge fan of cold calling—and it's not always the most efficient way to land new clients—but it definitely pays off every now and again," Bibey said.

A few years ago, Bibey found a company in his area with no online presence other than a basic website. "They didn't have a blog, social media profiles, a Google listing, anything," he said. So he decided to give cold calling the business a shot.

"The owner was receptive to learning more about content marketing and online marketing, so the next day we met at her office. Within a week, all of the details of our engagement were in place."

That one quick cold call, Bibey said, resulted in a client that's been with his company for more than three years.

5. Convince a company to create a job for you

A great way to avoid having to be compared to hundreds of other applicants is to convince a company to hire you for a job they didn't know they needed to fill.

This one comes from my own experience.

My first job out of college, as I mentioned before, was at UPS. But during the recession in 2009, the company retired some of its fleets to reduce costs, so they needed fewer editors. As the person with the least seniority on the team, I was laid off.

It was a terrible time to look for a new job, so I made ends meet by teaching some college writing courses and working as a freelance writer.

One day, the CEO of one of the companies I was writing for called a meeting with all of the freelance writers. On the call, he mentioned that he was interested in doing a better job of optimizing our content for search. It was just a minor comment—it had nothing to do with the call—but it piqued my interest.

I spent all night putting together a detailed video presentation explaining how to optimize content for search, highlighting things we were doing wrong, and making recommendations for things we could do better.

When I finished, I sent it to my editor at the company. He shared it with the CEO. Two days later, they called me in for a meeting and offered me a full-time job as an SEO Specialist.

The Benefits and Risks of Going Above and Beyond

If you're anything like me, doing something over the top to get noticed by an employer might go against your nature. Your first inclination when considering doing something like sending a cold email or writing a song to get a job might be embarrassment or fear. What if they think you're ridiculous? What if you stand out in the wrong way?

When I have thoughts like this, I remember the advice my mom gave me when I was young and too afraid to ask the girl across the street to play with me: "The worst thing that can happen is that she says no."

Sometimes you'll do something to stand out and it won't work. They'll say no. You'll get the dreaded, automated Thanks for applying, but… email.

I'm not a cold outreach kind of person, but I've played around with the tactic recently to try to find new clients. 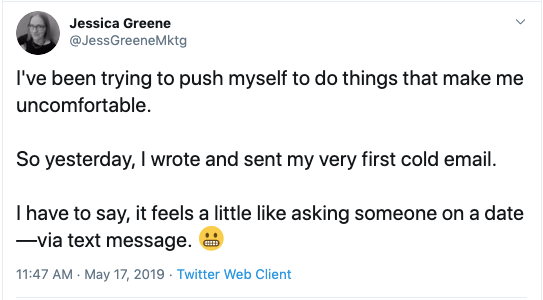 The cold email I was referring to in that Tweet didn't lead to a new client, but it did lead to a good conversation. And I suspect the person I spoke with will remember our conversation down the line when he decides he does need some help with content marketing.

The benefits of potentially getting your dream job far outweigh the potential disappointment you'll feel when someone says no.

But when deciding whether or not to do something big to stand out to get a job, it does help to understand the culture of the company you're applying to and the purpose of the job you're applying for as much as you can.

For example, in a Rework podcast that Basecamp's leaders published while hiring for their five open roles, Jason Fried mentioned that several people who applied for their Head of Marketing position had sent packages to the office.

Some people were trying too hard to get attention. And I'm thinking to myself: If they're going to be representing us to potential customers, are they going to go overboard and try too hard? That's what this job is. This job is about presenting us to people.

So it's important to do your research before making a decision. Try to get a feel for what your prospective employer might be receptive to. Check out their social media profiles and personal blogs—any information you can find that might help you make the right decision on the best way to stand out before you submit your application.

Have an interesting story of your own to share about a creative way you caught the attention of a company you wanted to work for? Please share your story in the comments below. I read all of my comments and would love to hear your story! Plus, the more examples we have, the more we can help others who are actively looking for work.